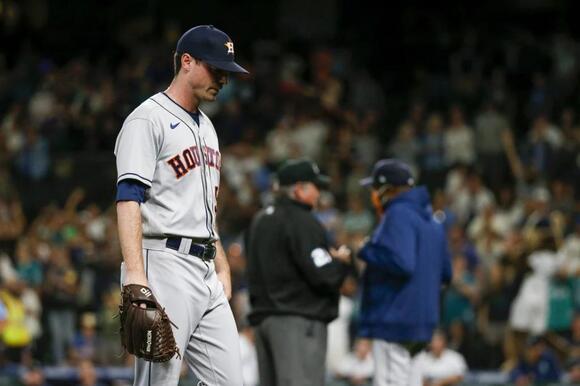 Major League Baseball said Raley is appealing the discipline, so the suspension will not start Friday night when the Astros visit the San Francisco Giants. Raley also was fined an undisclosed amount.

Also, Houston manager Dusty Baker received a one-game suspension and an undisclosed fine due to the incident. Baker is serving the suspension on Friday night.

Raley’s actions came immediately after serving up a grand slam to Dylan Moore that allowed the Mariners to take an 11-8 lead in a contest Houston once led 7-0. Seattle’s 11-8 lead held up. 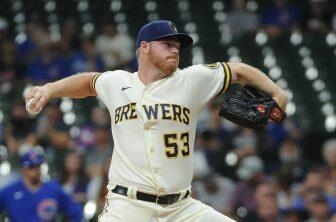 Raley threw three straight inside pitches toward Crawford, finally plunking him in the upper back on the fifth pitch of the at-bat — a pitch that would have been ball four.

Mariners manager Scott Servais was enraged by the situation and unleashed a string of venom toward Raley, and the umpiring crew got together and ejected Raley.

Raley said after the game that “there was no intention there. Ball got away from me.”

Servais had a different view.

“You can’t let pitches get away like that and hit somebody after you give up a grand slam,” Servais said. “Was it on purpose? I don’t know. It was a very emotional game and I’m glad he got ejected.”

As of this morning, the Seattle Mariners find themselves heading home after a six-game road trip that saw them sweep the Arizona Diamondbacks before dropping a tough series to the Houston Astros. Winning 4 of 6 in this stretch was probably the realistic expectation for this group, but losing the...
MLB・14 DAYS AGO
Sportsnaut

The Houston Astros should be frustrated over how the Tampa Bay Rays’ incident involving Kevin Kiermaier was handled. If you ask MLB fans what comes to mind when they hear someone mention the Houston Astros, it’s likely something to do with the organization’s infamous sign-stealing scandal. Understandably so, the Astros won’t be able to live that down anytime soon.
MLB・1 DAY AGO
The Crawfish Boxes

Due to life pulling me in about 10 different directions I’m gonna keep this one short and sweet with just quick notes and matchups with a poll today. Have a good weekend everyone!. The Angels are not that far removed from being a popular dark horse candidate to win the...
MLB・13 DAYS AGO
FanSided

Now that Marwin Gonzalez is back in a Houston Astros uniform, it’s very possible that he could become an X factor for the Astros as the American League playoffs creep ever closer. It’s been a long and winding road for the 32-year-old Gonzalez since he left the Astros in free...
MLB・15 DAYS AGO

“Ohtani Day” Kicks Off The Weekend Series Against The Houston Astros

Prior to yesterday’s off day, the Halos kicked off the eight-game, 10-day road trip by splitting a mini two-game interleague series with the San Diego Padres. With a record of 3-4 through the first seven games of September and 69-71 overall, manager Joe Maddon is looking to inspire the team into playing like it’s “1985” during the remaining 22 games (including tonight) of the regular season. Unfortunately, the Astros have not been a friendly matchup for the Angels as the first place AL West squad have taken eight of 12 head-to-head matchups while keeping home field advantage on their side winning five of seven at Minute Maid Park.
MLB・13 DAYS AGO
USA TODAY Sports Media Group

The Houston Astros (84-59) and Texas Rangers (53-90) play the second game of a four-game set Tuesday at Globe Life Field. First pitch is scheduled for 8:05 p.m. ET. Let’s analyze the lines around the Astros vs. Rangers odds with MLB picks and predictions. Astros RHP Zack Greinke (11-5, 3.66...
MLB・10 DAYS AGO
fantasydata.com

Houston Astros first baseman Yuli Gurriel will not start Sunday's matchup with the Arizona Diamondbacks. Aledmys Diaz will get the nod at first base, batting second in the lineup. Gurriel has been very hot at the plate lately, slashing .375/.375/.438 with five multi-hit games in his last seven starts. Gurriel last homered on September 5, and while he has a very safe fantasy profile in terms of batting average, he lacks the top-end contributions with power or speed. Fantasy managers can expect him back in the lineup Monday against the Los Angeles Angels.
MLB・8 DAYS AGO
CBS Sports

The LA Angels are now 70-73 after dropping two of three to the Houston Astros. They are now 10 games out of the playoffs, and you can kiss those hopes goodbye. It was a disappointing series, but I didn’t expect much of a different outcome to be honest. There were three discouraging aspects from this series in general, and at this point it feels like I’m only watching for Shohei Ohtani, Jared Walsh, Jo Adell, and Brandon Marsh. This season isn’t fun anymore.
MLB・9 DAYS AGO
ABC13 Houston

You've seen the third baseman on the field. Now, you'll get to know more about him, including his road to recovery.
MLB・7 DAYS AGO
FanSided

With a fifth inning strikeout of Eric Hosmer, Max Scherzer became the 19th member of the 3000 strikeout club. Next in line may be Houston Astros pitcher, Zack Greinke. While he sits 201 punch outs away, the next milestone on Greinke’s list will be passing Cy Young on the all-time strikeout list. Based on his numbers this year, he should have already done this. However, strikeouts have been eluding Greinke in recent starts.
MLB・9 DAYS AGO
ESPN

Houston Astros outfielder Michael Brantley has been placed on the injured list with right knee discomfort, manager Dusty Baker announced Wednesday. Brantley, whose .315 batting average puts him among the American League leaders, had missed the past three games for the AL West-leading Astros after leaving Saturday's game against the Los Angeles Angels due to soreness in the knee.
MLB・8 DAYS AGO
ESPN

ARLINGTON, Texas -- Houston Astros starter Jake Odorizzi left with right foot soreness after coming off the mound and running to cover first base in the second inning against the Texas Rangers on Monday night. Odorizzi ran to the bag to take first baseman's Yuli Gurriel's throw for the out...
MLB・10 DAYS AGO
Dallas Sports Focus

(Photo by Richard Rodriguez/Getty Images) While thumping the Texas Rangers on Wednesdays 7-2, the Houston Astros and Kyle Tucker unveiled a new celebration: The Tucker Stretch. In the top of the eighth inning, Tucker slammed his 26th homer of the season on a drive to right-center field. As he rounded third base, the left-hander and third base coach Omar Lopez unveiled The Tucker Stretch.
MLB・7 DAYS AGO