Improper use of police informants being tracked by CIU 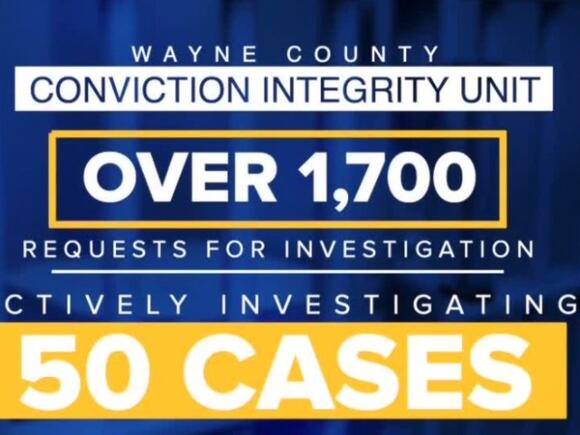 "Let our innocent people go now. It's too many people to name," said Nakira Smith Bullard, the daughter of Larry Smith who was released from a Michigan prison earlier this year after spending 27 years behind bars.

Smith had been convicted in the 1994 murder of a man in Detroit, but the Wayne County Conviction Integrity Unit (CIU) examined his case and found that the jailhouse informant, who claimed Smith confessed to him, was discredited and suspected of fabricating information to gain favors from police in his own criminal case.

Larry Smith and his family have joined others who have been wrongfully convicted or exonerated in Wayne County in a push for increased funding so that Wayne County's CIU can increase their staffing level.

"Y'all putting money into everything else," Smith's daughter said. "Let our people go."

They have received over 1,700 requests for investigation. Fifty cases are actively being investigated by the CIU.

Prosecutor Kym Worthy started the CIU in 2018 to investigate claims of innocence.

"We have a couple of cases where the police officer, the officer in charge, and others have lied about certain things that we found out later through the CIU investigation," Worthy said, adding that the improper use of police informants is something they're seeing more of as they investigate cases that are, sometimes, over ten and twenty years old.

As the CIU investigates claims of innocence, Worthy said they are keeping a database of police officers and informants to see if there's a pattern.

"And if we ever get to the point where we see those patterns developing from the cases that we are doing, then we will take some action on them," Worthy said.

Attorney Valerie Newman is the Director of Wayne County's CIU.

Newman told 7 Action News that they have to thoroughly investigate the cases and claims of innocence, talking to witnesses and reading everything related to the case.

"I could have all the people in the world, it's still gonna take time because we have to do everything ourselves," she said. "It would take a lot of resources to move through these cases and try and reduce that waiting period."

The work of Wayne County's CIU has led to nearly 30 people being granted relief from their convictions and prison.

"The Conviction Integrity Unit has made all the difference in the world, in terms of people really having a chance to get out," said Claudia Whitman of the National Capital Crime Assistance Network, a non-profit she formed to help people across the country who have been wrongfully convicted.

Whitman traveled to Michigan for the release of Danny Burton, one of the Michigan cases she's worked on.

Burton spent 32 years in prison and he was released after the CIU re-investigated his case and determined he had been wrongfully convicted.

"When we do succeed, it's fantastic," Whitman said. "You're giving somebody a chance to have their life back."

Police in Vineland are asking for the public's assistance in identifying a suspect with an apparent smoking habit. Vineland Police say the man in question was caught on surveillance at the Heritage's store in Vineland. It appears that man is carrying several cartons of cigarettes. Wednesday night, about 11:30pm, police...
VINELAND, NJ・8 DAYS AGO
Tyler Morning Telegraph

A former Smith County Sheriff's Office deputy is accused of using official information to help someone connected to drug trafficking in Mexico, police documents show. Luis Alberto Sandoval, 28, of Tyler, was arrested Aug. 11 on a charge of misuse of official information and released from jail the next day on $250,000 bond.
SMITH COUNTY, TX・4 DAYS AGO
fox32chicago.com

CHICAGO - There was a heavy police and SWAT presence in Old Town Wednesday afternoon. Officers were dispatched to the 200 block of West Division Street shortly after 2 p.m. after a caller claimed he had killed his wife and three children, police said. Shortly after 4 p.m., a man...
CHICAGO, IL・3 DAYS AGO
The Baltimore Sun

Trial board: Baltimore police officer improperly shared information about a former top deputy that ended up on Twitter

A 20-year-veteran of the Baltimore Police Department improperly shared information about an expunged arrest of a former command staff member and obstructed an internal investigation, a department trial board has found. Lt. Michael Pool was judged guilty of sharing an old mugshot and other information from an expunged domestic violence case of Andre Bonaparte, who came out of retirement to ...
BALTIMORE, MD・3 DAYS AGO

Police are investigating a shooting with an unknown suspect that left one person injured Wednesday morning in Greeley. About 2:33 a.m., officers were on an unrelated call at a local hospital when a vehicle arrived on the scene with a gunshot victim inside, according to Greeley police. The 48-year-old victim...
GREELEY, CO・3 DAYS AGO
KFDA

DA Mark Jones’ indictment: He’s accused of asking a police officer to lie so charge could be upgraded to murder

HENDERSONVILLE, Tenn. (WKRN) — A dangerous trend in Hendersonville is putting bystanders at risk. Police say more suspects are fleeing from officers like never before. “It was extremely, extremely rare that we would attempt a traffic stop, and the vehicle would run from us, and now we are seeing times where a shift of our officers go out there and during one shift, we may have three vehicles run from us,” explained Sgt. Neal Harris, with the Hendersonville Police Department.
HENDERSONVILLE, TN・12 DAYS AGO

Delaware State Police this week were investigating an attempted armed robbery that occurred in a Millsboro community Tuesday. According to the DSP, on Sept. 14, around 9:27 a.m., a 67-year-old woman was loading items into her car in the driveway to her residence on Sussex Lane in the Mariners Cove community when an unknown man reportedly approached her. The man allegedly pointed a gun at the victim and demanded money.
DELAWARE STATE・10 DAYS AGO
reviewjournal.com

A new lawsuit claims the Nevada Highway Patrol unconstitutionally seized nearly $87,000 from a retired Marine sergeant during a traffic stop in February through a controversial federal program known as equitable sharing. State troopers thought the former Marine, 39-year-old Stephen Lara, fit the profile of a drug trafficker, but the...
NEVADA STATE・23 DAYS AGO
NWI.com

MUNSTER — The Munster Police Department is looking for information that could help in a fraud investigation. According to a news release Tuesday, the department is looking into a fraud that took place around 7:30 p.m. on Aug. 2 at the Target located at 8005 Calumet Ave. The male captured...
MUNSTER, IN・11 DAYS AGO
WCAX

BENNINGTON, Vt. (AP) - A citizen task force designing a future panel that will provide oversight of the Bennington Police Department is moving forward. The task force’s role is to propose a permanent community safety and equity board that will have oversight of the police department. The goal is to move Bennington toward achieving its vision of becoming a welcoming community where everyone benefits from an outstanding quality of life. The 11-person panel’s work includes recommending police department training, reviewing complaints, and analyzing safety and equity data collected by the department.
BENNINGTON, VT・2 DAYS AGO

Thomas Lane, who held George Floyd's feet, and J. Kueng, who knelt on Floyd's back, each pleaded not guilty to violating his civil rights.
LAW ENFORCEMENT・11 DAYS AGO
penbaypilot.com

ROCKLAND — Rockland Police are investigating the thefts of several catalytic converters that were stolen during the past two weeks from vehicles parked in the Industrial Park in Rockland. Police are asking citizens to please take notice of any suspicious vehicles or persons in the area, particularly during the overnight...
ROCKLAND, ME・8 DAYS AGO
wcti12.com

JACKSONVILLE, Onslow County — Police in eastern North Carolina are working to identify a shoe thief. The Jacksonville Police Department said the man was caught on surveillance video leaving Shoe Carnival on September 10. He is described as a white man in his late twenties – early thirties, of medium...
JACKSONVILLE, NC・5 DAYS AGO
cw34.com

LOUISVILLE, Miss. (WCBI) – Tuesday night, the Louisville Board of Aldermen voted to fire Officer Ty Hardin of the Louisville Police Department for multiple violations of city and police department rules. “The accusations are still under investigation and most likely, we’re going to pass this on to an outside agency,”...
LOUISVILLE, MS・3 DAYS AGO
CBS Boston

NATICK (CBS) – A gun that was reported missing in Natick has been found. It was located by State Police on Route 128 Thursday. Police said a person went to a home in Natick Wednesday evening and at some point “inadvertently left a firearm on top of their vehicle.” The unidentified person called police to tell them what happened and said the gun may have fallen off “in the area of Lilja School” on Bacon Street. Officers brought in their K-9 and a K-9 from the State Police who is specifically trained to search for guns, but nothing was found as of Thursday morning. Parents were alerted as a precaution and officers were in the area for the start of school Thursday. The incident remains under investigation.
NATICK, MA・2 DAYS AGO
People

Police are seeking to arrest Precious Stephens on "charges of malfeasance in office and interfering with an emergency communication" The New Orleans Police Department is searching for a 911 operator after she allegedly "deliberately" hung up on callers. On Thursday, officials announced in a statement on Facebook that they have...
LOUISIANA STATE・22 DAYS AGO
Fox News

An Omaha man who had already served five stints in prison has been sentenced again — this time to decades behind bars for repeatedly choking his girlfriend’s 2-year-old daughter into unconsciousness. David Coleman, 38, was sentenced Tuesday to 42 to 52 years in prison, the Omaha World-Herald reported. He had...
PUBLIC SAFETY・17 DAYS AGO