Surge of evicted tenants will be looking for affordable housing 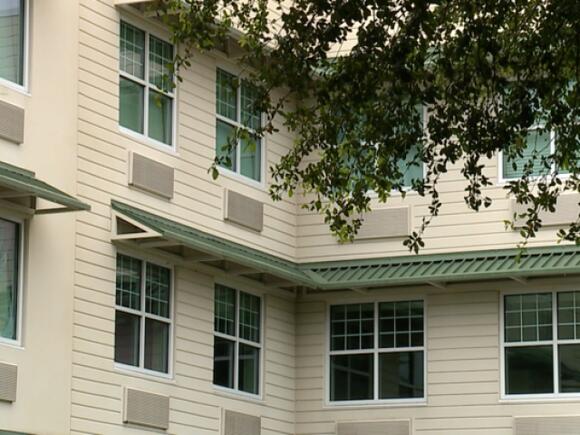 "No one wants to rent to you with an eviction," said Michelle Brooks.

Michelle Brooks said she would be on the street if it were not for her grandmother taking her and her children in.

She was first evicted in 2018 when she was diagnosed with osteoarthritis and unable to work.

“So, I was homeless for about a year. With my three kids and we were living in cars in hotels and people’s couches,” Brooks said.

She eventually found a house, but then in the middle of the pandemic, she faced eviction for a second time.

“I could not find one spot in an emergency shelter or hotel voucher. I couldn’t find anything, so we would live in the car,” she said.

Brooks has finally been put on the waitlist for an affordable housing voucher through the Tampa Housing Authority .

ABC Action News reached out to the housing authority to see what their wait times are. The waitlist for Hillsborough County affordable housing is two years or more.

With the federal eviction moratorium set to expire Saturday, thousands of Tampa Bay residents behind on rent will be looking for a new place to live and help to pay the rent.

“We are at capacity. Most of our families, they’ve come to us due to evictions or loss of income,” said Zackia Robinson, Metropolitan Ministries Associate Director of Intake.

Robinson said the need for rental assistance grew by 1,100% at Metropolitan Ministries during the pandemic and they are preparing for a surge of newly evicted tenants to end up at their door.

Resources including giving motel vouchers to families until they find somewhere stable to live.

“It’s very possible that your homeless population may triple, quadruple. That could happen I would not be surprised,” said Daniel Drake.

Attorney Daniel Drake specializes in evictions. “If the judge agrees with the landlord that the tenant should’ve paid rent and they didn’t, then they’ll issue a Writ of Possession that’s given to the sheriff’s department. The sheriff’s department in a few days goes out and posts the Writ of Possession under the door. And they don’t serve it yet, they post it, so you see it and it says 24 hours to vacate,” he explained.

But it’s not too late to apply for rental assistance through state and local government programs.

“Initially the City of Lakeland was not in the business of rental assistance. We only did owner-occupied rehab and home purchase assistance. And just because of COVID we’re doing rental and utility assistance ,” said Annie Gibson, Lakeland Housing Program Supervisor

Gibson said so far, the City has handed out $1.3 million to help those behind on rent payments due to COVID-19.

Hillsborough County and the City of Tampa have distributed $11.6 million through its Emergency Rental Assistance Program .

Though help is still available, Gibson said the application process can take a while. For many frustrated tenants, assistance can’t come soon enough.

“Hard pill to swallow, I can't provide for them and I'm trying to do the best I can,” said Brooks.

FULTON COUNTY, Ga. - Evictions are now being enforced in almost all counties throughout metro Atlanta since the US Supreme Court struck down the CDC's eviction moratorium. There are steps that need to be followed by the tenant and the landlord when it comes to evictions, but unfortunately, not all tenants are aware of the process.
FULTON COUNTY, GA・8 DAYS AGO
binghamtonhomepage.com

Eviction ban extended, what tenants and landlords should know

ALBANY, N.Y. (NEWS10) – Governor Kathy Hochul signed off on the state’s eviction moratorium extension early this morning. The ban will now continue until January 15th. The Governor and lawmakers are urging tenants in need to apply to the COVID Emergency Rental Assistance Program. That website can be found at: otda.ny.gov/programs/emergency-rental-assistance.
ALBANY, NY・14 DAYS AGO
Leader-Telegram

Q: Now that evictions are resuming, I need to deal with my tenant who is over six months behind. I have continued paying the mortgage, but it has not been easy. I need the cash flow from a paying tenant before I end up in foreclosure. Is there anything that...
HOUSE RENT・14 DAYS AGO
Culpeper Star Exponent

As eviction moratorium ends, tenant protections that remain in place

A staffer with Culpeper-based Foothills Housing Network provided recent information regarding the status of evictions in Virginia. The U.S. Supreme Court has overturned the most recent COVID-19 Eviction Ban which was to expire on Oct. 3, according to Foothills Housing Network program coordinator Rebecca Wareham. Tenant protections that remain place, according to Legal Aid Works, are:
13 DAYS AGO

The Chautauqua County Homeless Coalition and other community advocates continue to work with Jamestown tenants struggling to pay their rent and facing eviction. The coalition, along with Chautauqua Opportunities, is encouraging those facing eviction to inquire about the state's newly extended rental assistance program. Tenants, landlords and small business owners...
CHAUTAUQUA COUNTY, NY・9 DAYS AGO
San Francisco Examiner

Confusion swirls among tenants ahead of eviction moratorium ending Sept. 30

As the end of statewide eviction protections approach, San Francisco tenants are facing a swirl of confusion in the face of last-minute changes to obtain relief. Renters have spent months applying to San Francisco’s program doling out financial assistance for back rent accrued during the pandemic as a parallel state program did the same. But last week, the Mayor’s Office of Housing and Community Development announced that, like other cities, the local program would be ending and tenants should seek relief from the state program.
SAN FRANCISCO, CA・6 DAYS AGO
fox8live.com

Tenants served with an eviction notice days after Ida; with nowhere else to go

NEW ORLEANS (WVUE) -Some renters at the Saulet Apartments in New Orleans say property managers are trying to evict them in a matter of days following Hurricane Ida with no other options and nowhere else to go. After filing a cease-and-desist notice against the property, one attorney says these renters...
NEW ORLEANS, LA・5 DAYS AGO
KRGV

The Supreme Court ended the nationwide moratorium that prevented landlords from kicking out tenants who couldn't pay rent primarily due to the COVID-19 pandemic; now, hundreds of thousands of people are at risk of losing their homes, including Rio Grande Valley residents. David Andrew Gonzalez, is just one landlord among...
HOUSE RENT・11 DAYS AGO

Extension of Ban On Evictions Brings Joy To NY Tenants

Governor Kathy Hochul has signed off on extending the state’s eviction moratorium Thursday, now extending the ban until January 15th, 2022, which is still short of the one-year extension some were hoping for. The Governor and lawmakers are stressing that tenants in need should apply to the COVID Emergency Rental...
HOUSE RENT・14 DAYS AGO
CBS Miami

MIAMI (CBSMiami) – Miami-Dade residents facing eviction will soon have a new tool to help resolve their dispute with their landlord. The county is launching a courtHELP platform that will give landlords and tenants the opportunity to resolve their eviction online. “As eviction moratoriums end, courts statewide are bracing for a sharp rise in eviction cases,” said Nushin G. Sayfie, Chief Judge of the Miami-Dade Courts in a statement. “We believe that courtHELP will make it easy for landlords and tenants to start communicating and resolving their differences early on – well before the case proceeds to a full court process.” “Launching...
MIAMI-DADE COUNTY, FL・14 DAYS AGO
wvik.org

It's Harder to Find Affordable Housing

On Midwest Week, Herb Trix's guest is Cara Smith, business reporter for the Quad City Times and Dispatch-Argus. You can also hear Midwest Week Fridays on WVIK at 6:20 pm during All Things Considered. A native of Detroit, Herb Trix began his radio career as a country-western disc jockey in...
14 DAYS AGO
thecity.nyc

How New Eviction Moratorium Can Help Tenants, Landlords and Homeowners

Developers of a new building in Portland's Bayside neighborhood say the project will help address the city's need for more affordable housing and child care. The new project is a partnership between the Portland Housing Authority and child care provider Youth & Family Outreach. The planned six-story building would nearly...
14 DAYS AGO
southdadenewsleader.com

The weather for Wednesday, August 25, was pleasant for a summer afternoon in more ways than one for those who will reside in Fair Oaks Apartments. District Eight Commissioner Danielle Cohen Higgins and representatives from Miami-Dade County Mayor Daniella Levine Cava’s office were joined by U.S. Representative Congressman Carlos Gimenez to congratulate the Miami-Dade County Public Housing and Community Development Department for opening the latest affordable housing complex in the Leisure City Community Urban Center.
14 DAYS AGO
WCPO 9 Cincinnati

Animal shelters across the country are hitting critical capacity; some shelters are seeing an influx as people return to work after staying home during the pandemic, others believe evictions are to blame.
CINCINNATI, OH・10 DAYS AGO
13 WHAM

Landlords: Eviction moratorium will have lasting effects on tenants, neighborhoods

Rochester, N.Y. — New York has extended eviction protections for tenants through January. Yet there's a gaping hole involving landlords. Some are now falling behind in property taxes and that could ultimately fall back on the people who rent from them - and on the neighborhoods. "I don't make enough...
ROCHESTER, NY・10 DAYS AGO

STARKVILLE, Miss. (WTVA) - The Oktibbeha County Chancery reached an agreement Wednesday that Ferretti Property residents will have nine more days to vacate the primacies, which is next Friday. Tenants with certain health conditions have until October 14th to leave the complex. WTVA reached out to the landlord about this...
STARKVILLE, MS・8 DAYS AGO
KIMT

PORTLAND, Ore. (KOIN) — Oregon is working against the clock to deliver rental assistance to tenants facing eviction. At the beginning of August, Oregon had paid just under 5% of tenants who had applied for help through the state’s Emergency Rental Assistance Program. Just 13% of households have been paid...
7 DAYS AGO
KATC News

Tenant thankful for eviction extension, but worried it's not enough

In a move to bring relief to people affected by Hurricane Ida, Governor John Bel Edwards is pausing all court deadlines, including evictions. The storm left residents across the state struggling, this time with their apartments and rent homes.
9 DAYS AGO