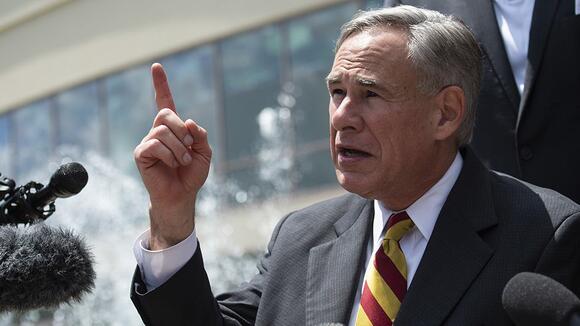 Attorney General Merrick Garland made good on a threat to sue the state of Texas, filing a lawsuit Friday challenging an executive order from Gov. Greg Abbott (R) that limits nongovernmental organizations from transporting migrants from the southern border.

The Wednesday order from Abbott effectively made it illegal to transport undocumented immigrants in a car, under the guise of preventing the pandemic's spread.

It bars anyone other than federal, state or local law enforcement from transporting migrants back to the border — something Garland warned in a Thursday letter would impede border officials' ability to contract with various groups, while civil rights groups said it would lead to racial profiling.

“As part of the execution of U.S. immigration laws, there are a variety of circumstances in which noncitizens must be transported between locations,” the Department of Justice wrote in its brief, noting that noncitizens “need transportation, frequently through privately arranged travel by bus or rail.”

The Justice Department argues Abbott’s order violates the supremacy clause of the Constitution and “directly interferes with the administration of federal immigration law,” asking the court to nullify it.

“The order would jeopardize the health and safety of noncitizens in federal government custody, federal law enforcement personnel and their families, and our communities,” Garland wrote Thursday.

Abbott has sought to justify the order, arguing that transporting migrants poses a COVID-19 threat within Texas.

The Biden administration, however, has been swiftly expelling the majority of migrants under Title 42, a Trump-era policy allowing the government to turn away those who cross between posts of entry without proving the change to seek asylum.

Unaccompanied migrant children are exempted from Title 42, and may be transported between facilities before ultimately being sent to live with family members or sponsors within the U.S.

The order from Abbott directs the Texas Department of Public Safety to “stop any vehicle upon suspicion” of transporting migrants, and says the agency is authorized to “impound a vehicle” that was used to transport a group of migrants.

“The current crisis at our southern border, including the overcrowding of immigration facilities and the devastating spread of COVID-19 that the influx of non-citizens is causing, is entirely the creation of the Biden Administration and its failed immigration policies,” Abbott tweeted in a Friday statement before the suit was filed.

Texas Attorney General Ken Paxton (R) on Friday said that he "wont back down."

"I will defend Gov. Abbots order in court and we will work together to keep President Biden out of Texas's business."

well then maybe the government needs to figure out how to get these illegals into the country without going through his State. He's only protecting his citizens in the state of Texas

Sue the DOJ for not enforcing laws and abusing their power trying to impede state's rights. The DOJ should not be the one leading the way to lawlessness, but they are. Illegals are not migrants, and they are positive covid carriers.

I back Abbott 100%!! We are all sick of the special treatment of criminals!! You cross the border illegally that makes you a criminal!! I hope more State Officials follow his lead.

"Are you saying that you will not sign an exception for rape and incest?" Chris Wallace asked the Republican governor.
POLITICS・1 DAY AGO
Washington Post

Denouncing their actions as “outrageous,” President Biden vowed there would be consequences for the Border Patrol agents photographed riding horseback while swinging reins and charging at Haitian migrants trying to enter the country. “Those people will pay,” the president said. On Sunday, Texas Gov. Greg Abbott (R) had a different...
TEXAS STATE・11 HOURS AGO
Newsweek

Some Texas county judges expressed frustration following the announcement, saying they do not know what the audits entail.
TEXAS STATE・2 DAYS AGO
Washington Post

Texas Gov. Greg Abbott (R) has sent a fleet of state-owned vehicles to line up for miles as a barricade along the border with Mexico, insisting the state was taking “unprecedented steps,” as thousands of migrants still seek to cross into the United States. The “steel wall” of cars, as...
TEXAS STATE・5 DAYS AGO

In a lawsuit filed Thursday, Gov. Greg Abbott and the Texas Commission on Environmental Quality asked a U.S. appeals court to vacate a license issued earlier this month for construction of a high-level nuclear waste storage site in Andrews County. The lawsuit filed by the Texas Attorney General’s Office with...
TEXAS STATE・4 DAYS AGO
kurv.com

Two tech industry groups are suing Texas Attorney General Ken Paxton over the state’s new law against viewpoint discrimination in social media. NetChoice and the Computer and Communications Industry Association filed suit Wednesday in Austin federal court. The bill was passed in response to complaints that conservatives are often censored online. When it takes effect in December, it will allow social media users and the state attorney general to sue social media companies for political censorship. The lawsuit claims the new law violates the companies’ First Amendment right to decide what appears on their websites.
TEXAS STATE・4 DAYS AGO
Fox News

Texas Gov. Greg Abbott on Tuesday described how law enforcement had created a "steel barrier" of vehicles to block migrants from entering the United States – as the Lone Star State works to shut down a wave of illegal migration. "They have created a steel barrier preventing people from being...
TEXAS STATE・5 DAYS AGO
CBS DFW

AUSTIN (CBSDFW.COM/CNN) — After enacting what is the most restrictive abortion ban law in the country, Texas Governor Greg Abbott has also signed a bill making it harder to obtain abortion-inducing drugs in the state. Senate Bill 4, signed into law by the state’s Republican governor on Friday, prohibits a...
POLITICS・6 DAYS AGO

Texas Governor Greg Abbott is praising state troopers for erecting a temporary barrier to keep people from crossing the Mexican border. The Republican governor told reporters today DPS and the Texas National Guard lined an area near Del Rio with vehicles, essentially sealing it from entry. Abbott says that “steel barrier” is keeping illegal immigrants from getting into the U.S.
TEXAS STATE・6 DAYS AGO
fox26houston.com

Abbott gets firsthand look at migrant surge at Texas-Mexico border

AUSTIN, Texas - Gov. Greg Abbott was at the Texas-Mexico border Tuesday to get a first-hand look at the latest migrant surge. Abbott held a press conference at the Del Rio International Bridge, alongside officials from the Texas Department of Public Safety, the Texas Military Department, as well as the National Border Patrol Council.
AUSTIN, TX・6 DAYS AGO
KENS 5

SAN ANTONIO — Governor Greg Abbott gave remarks from Del Rio to address border security and the ongoing humanitarian crisis at an international bridge. The governor was joined by Texas Department of Public Safety Director Steve McCraw, Texas Military Department Adjutant General Tracy Norris, and National Border Patrol Council President (NBPC) Brandon Judd. During the briefing, Abbott laid the blame at the feet of the Biden administration for the tens of thousands of migrants being held under a bridge in Del Rio.
TEXAS STATE・6 DAYS AGO
Denton Record-Chronicle

AUSTIN — A bill adding more restrictions and raising criminal penalties for the use of abortion-inducing medication in Texas goes into effect in December after being signed with no fanfare by Gov. Greg Abbott. Senate Bill 4, which passed during the second special session that adjourned Sept. 2, has been...
TEXAS STATE・6 DAYS AGO

Texas Gov. Greg Abbott on Tuesday called on the Biden administration to "up their game, big time" as Texas struggles to cope with a historic migrant crisis – including a recent surge of Haitian migrants in Del Rio. "The only thing they've shown is an incapability of dealing with this...
TEXAS STATE・6 DAYS AGO
WashingtonExaminer

AUSTIN — Gov. Greg Abbott on Monday asked President Joe Biden to declare a federal emergency and provide resources to help state and local authorities cope with a migrant surge at the Texas-Mexico border near Del Rio. The federal government’s “failure to enforce immigration laws and in particular, its failure...
TEXAS STATE・7 DAYS AGO
San Angelo LIVE!

AUSTIN – Texas Attorney General Ken Paxton has sued the Biden Administration over an order directing states to allow trans-gender and LBGTQ+ individuals to select which bathroom they want to use.   Paxton filed a lawsuit against the Biden Administration to stop the June 15 Guidance from the Equal Employment Opportunity Commission (EEOC). This guidance requires employers to allow exceptions on the usage of bathrooms, locker rooms, showers, dress codes and even personal pronouns based upon the subjective gender identities of their employees. This unlawful guidance increases the scope of…
TEXAS STATE・7 DAYS AGO

TEXAS — Texas Gov. Greg Abbott on Monday announced he has requested of the Biden administration a federal emergency declaration for Texas over the influx of migrants at the border with Mexico, specifically the thousands of Haitian migrants who have congregated in Del Rio in order to seek asylum. What...
TEXAS STATE・7 DAYS AGO
bloomberglaw.com

Gov. Greg Abbott said that he directed state troopers and the Texas National Guard “to shut down six points of entry along the southern border” at the request of U.S. Customs and Border Protection (CBP) — then reversed himself shortly after, blaming the Biden administration for flip-flopping in its request for state help.
TEXAS STATE・10 DAYS AGO
houstonpublicmedia.org

The Texas Department of Public Safety has arrested almost 6,000 migrants for criminal trespassing since late July. State authorities can not arrest people on immigration charges because that is under the purview of the federal government. But earlier this year, Gov. Greg Abbott ordered DPS to begin arresting migrants who cross the Rio Grande on state charges of trespassing in an attempt to deter them from crossing.
TEXAS STATE・10 DAYS AGO