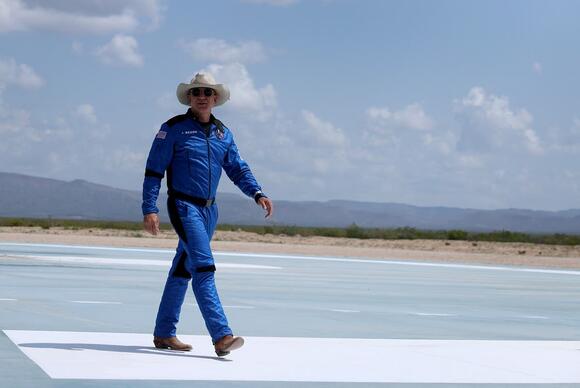 The net worth of Amazon founder Jeff Bezos dropped by $13.5bn after the company reported earnings that were below the expectations of analysts.

The drop removed 80 per cent of the increase to Mr Bezos net worth this year, Bloomberg reported. The huge drop is equal to 58 per cent of Nasa’s budget for 2021.

It is Amazon’s second-quarter results that have done damage to Mr Bezos’s wealth. The after-market results on Thursday didn’t meet Wall Street’s expectations and possibly signalled the beginning of the end of the sales increase for the online retail giant fuelled by the pandemic when consumers relied on the company to avoid going to stores.

The online retailer posted revenues of over $100bn for the third quarter in a row on Thursday, which still wasn’t good enough to avoid the stock price dive.

Amazon’s share price plunged 7.2 per cent to around $3,340 on Friday, pulling down the wealth of its founder and former CEO with it, to an estimated $196.6bn, from a starting point of around $207bn.

Mr Bezos is still classified as the world’s richest person following the drop, about $8bn ahead of Tesla founder Elon Musk.

The earnings of Alphabet, the parent company of Google, increased the wealth of co-founders Sergey Brin and Larry Page, while Bill Gates and Mark Zuckerberg didn’t see their net worths soar despite solid results from Microsoft and Facebook.

Mr Zuckerberg boasted about his vision for the future of Facebook as a “metaverse” last week but lost $5.4bn on Thursday as the company’s shares experienced their largest drop in two months following worries about its ad sales growth. Facebook stock is currently valued at about $355.

Mr Bezos’ focus appears to be more towards his space company, Blue Origin, following his first spaceflight earlier this month.

The company has sold more than $100m worth of tickets for future space travel.

The US Government Accountability Office rejected protests on Friday from companies affiliated with Mr Bezos that Mr Musk’s SpaceX was wrongly awarded a Nasa contract to exclusively build an astronaut lunar lander.

“NASA did not violate procurement law or regulation when it decided to make only one award ... the evaluation of all three proposals was reasonable, and consistent with applicable procurement law, regulation, and the announcement’s terms,” GAO managing associate general counsel Kenneth Patton said in a statement, according to CNBC.

SpaceX was awarded the contract, worth around $2.9bn, in April.

Mr Bezos has held the post of world’s richest person since March after briefly losing the spot to Mr Musk.

The Amazon founder stepped down as its CEO earlier this year, but still owns just over 10 per cent of the company and serves as its executive chairman.

Shares of Marin Software Inc. were both the biggest gainers and most active on major U.S. exchanges in afternoon trading Wednesdasy, after the digital advertising disclosed that it renewed a revenue share agreement with Alphabet Inc.'s Google LLC. The stock rocketed 58.7% on volume of 114.6 million shares, which compared with the full-day average of about 4.6 million shares. The company said the agreement with Google, which is for Marin to develop its enterprise technology platform and software products, is effective Oct. 1. That takes the place of the current revenue share agreement, which was entered into in...
STOCKS・15 HOURS AGO
Markets Insider

Amazon founder Jeff Bezos earmarked $1 billion of his $10 billion environmental philanthropy to conservation efforts Monday afternoon, aiming to protect 30 percent of the Earth’s land and sea by 2030 in an effort to prevent mass extinctions. The Bezos Earth Fund, which he formed in 2020, did not identify...
ENVIRONMENT・2 DAYS AGO

United Nations secretary-general Antonio Guterres at the General Assembly on Tuesday tore into billionaires for joyriding to space while millions go hungry on Earth.Mr Guterres highlighted the gap between the rich and the poor in his opening speech and said a "malady of mistrust" is spreading across the globe as people strive to bring food to the table."I am here to sound the alarm. The world must wake up. We are on the edge of an abyss and moving in the wrong direction. Our world has never been more threatened or more divided," he said.Billionaires Jeff Bezos and Richard...
AEROSPACE & DEFENSE・1 DAY AGO
MarketWatch

When the stock market pulls back, keep buying — especially these five companies

Sentiment has gotten too bearish. Consider shares of Microsoft, ConocoPhillips and Yum China.
STOCKS・1 DAY AGO
The Independent

Boris Johnson has said Jeff Bezos told him ensuring Amazon pays fair levels of tax is a job for governments.The Prime Minister said he urged the boss of the online giant that he must ensure a fair share is paid in the UK but accepted he will not pay tax as “an act of kindness”.Mr Johnson held climate-focused talks with Mr Bezos, one of the world’s richest men, on Monday in New York where the Prime Minister has been attending the United Nations General Assembly.“What I did say to him was that we in the UK feel very strongly...
ECONOMY・1 DAY AGO
24/7 Wall St.

How Americans Felt About Big Business Every Year This Century

How much confidence do you have in big businesses? What about small businesses? How satisfied are you with the size and influence of major corporations, or of how the government regulates big businesses and industries? Polling and analytics firm Gallup has been asking Americans these and other questions for years to gauge the public’s sentiment […]
SMALL BUSINESS・10 HOURS AGO

6 Artificial Intelligence Stocks To Watch: What You Need To Know Before Investing

AI technology is here to stay, so companies that utilize it should be well positioned for the future. Consider whether these stocks are right for your portfolio.
STOCKS・1 DAY AGO
techstartups.com

When Jeff Bezos stepped down as Amazon’s CEO back in July, he promised to spend the rest of his time on passion projects like his space company Blue Origin, Washington Post, and philanthropic efforts. In an email to Amazon employees, whom he also called Amazonians, Bezos said, “As Exec Chair...
ENVIRONMENT・1 DAY AGO
CNET

Facebook agreed to pay billions of dollars extra on top of an initial fine sought by the Federal Trade Commission in 2019 to protect CEO Mark Zuckerberg from personal liability related to a massive data leak probe, shareholders allege in a pair of lawsuits made public on Tuesday. In lawsuits...
INTERNET・1 DAY AGO
People

Jeff Bezos Pledges $1 Billion to Conservation: 'Nature Is Our Life Support System and It's Fragile'

“I hope this commitment inspires others to make their own pledges to protect and conserve nature and help in the fight against climate change,” Jeff Bezos said in a statement. Jeff Bezos has pledged $1 billion towards conservation projects with an emphasis on the Congo Basin, tropical Andes, and the...
ENVIRONMENT・1 DAY AGO

Boris Johnson has challenged Jeff Bezos on Amazon’s tax payments at a meeting in New York during his US visit. Downing Street said the Prime Minister had pushed for the online retail giant to work with countries on implementing a recent G7 deal to make multinationals pay more tax in the countries where they do business.
ECONOMY・1 DAY AGO
New York Post

UK Prime Minister Boris Johnson said he told Amazon founder Jeff Bezos that the e-commerce behemoth must pay its fair share in taxes. Johnson met with Bezos and his gal pal Lauren Sanchez on Monday in New York on the sidelines of the United Nations general assembly, which kicked off Tuesday.
NEW YORK CITY, NY・1 DAY AGO
newsbrig.com

Freshworks prices IPO at $36 a share, raising more than $1 billion

Freshworks Inc. priced its initial public offering at $36 a share Tuesday night, above its expected range of $32 to $34 a share. That range had already been upgraded from the original $28- to $32-a-share range. The San Mateo, Calif.-based company, which provides customer experience and management services as well...
STOCKS・1 DAY AGO
The Independent

Prime Minister Boris Johnson made a rainforest quip as he met Amazon founder Jeff Bezos, in a sideline event to the United Nations General Assembly. Mr.Johnson met the world’s richest man to discuss Amazon’s tax bill and the billionaire’s pledge to $1 billion to nature conservation. During the opening pleasantries,...
WORLD・1 DAY AGO
Newsweek

The crash saw other cryptocurrencies like Bitcoin and Ethereum experiencing drastic drops in value.
STOCKS・2 DAYS AGO
Deadline

Stocks retreated sharply Monday in the worst opening in weeks on jitters prompted by a potential crisis in the Chinese real estate sector, fear over Fed policy changes and negotiations over the U.S. debt ceiling in Washington, D.C. There’s also been some recent data raising fears of slower growth in the U.S. and global economy. Stocks fell across the board and the fears created pressure on riskier assets, with AMC Entertainment particularly hard hit — off 5% at the open — and exhibition stocks following. The share price of the nation’s largest theater chain has been inflated by Reddit-fueled buying that’s...
STOCKS・2 DAYS AGO
kfgo.com

(Reuters) -Amazon founder Jeff Bezos pledged on Monday to give away $1 billion in grants this year to focus on efforts around conservation. The pledge is a part of his previously announced the Bezos Earth Fund, which the Amazon founder started last year to execute his $10 billion commitment to fund scientists, activists and non-profit organizations in the fight against climate change.
ENVIRONMENT・2 DAYS AGO
Benzinga

The United Kingdom Prime Minister Boris Johnson plans to question Amazon.com Inc (NASDAQ: AMZN) founder Jeff Bezos over his company's poor tax record when the duo meets face-to-face in New York on Monday, as per a Financial Times report citing British officials. What Happened: Johnson reportedly plans on, among other...
ECONOMY・2 DAYS AGO