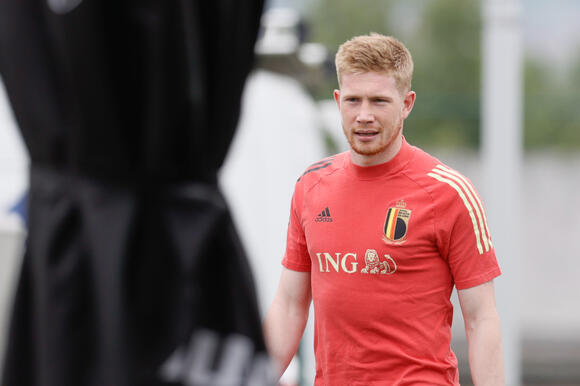 The London-born defender, 24, has recently returned to action following an eight-month spell on the sidelines, featuring in the Reds' 4-3 defeat against Hertha Berlin on Thursday.

Having cemented his status as one of the Premier League's best emerging defenders, Gomez has amassed 121 senior appearances across all competitions since his switch from Charlton Athletic to Liverpool in 2015.

He has forged a solid defensive partnership alongside Virgil Van Dijk at the heart of Jürgen Klopp's defence, and with just over two weeks before the Premier League campaign gets underway, Gomez is determined to get back to his best after a frustrating time on the treatment table.

In a recent exclusive interview with VERSUS on their YouTube channel, Joe Gomez said, "I think at the minute, Kevin De Bruyne is probably for me [the best player in the world]. Just all-round unbelievable."

Gomez is not the first player representing Manchester City's direct rivals who has expressed his admiration of the scintillating Belgian, who has proven on the pitch that he is the best player in the English top-flight by a distance over the years.

Liverpool captain Jordan Henderson, current Aston Villa star Jack Grealish, and Arsenal youngster Emile Smith-Rowe are others who have spoken highly of De Bruyne in the past few years, with many in the game considering the 30-year-old one of the best all-round players over the globe.

A club-record transfer at the time for a 'Chelsea reject', as he was labelled by many, was heavily criticised by large sections of the English media, when Manchester City completed the signing of Kevin De Bruyne from VfL Wolfsburg for £55 million in the summer of 2015.

The attacking midfielder was crowned German Player of the Year in 2015 following a breakthrough campaign during which he registered 16 goals and 28 assists in 51 outings across all competitions.

Upon his arrival to Manchester in 2016, Pep Guardiola told the Genk academy graduate that he had the potential to be among the world's best players in the years to come.

Fast forward to 2021, De Bruyne has cemented his position as the best attacking midfielders by taking his game to a different level and by providing midfielder masterclasses year in, year out, for club and country.

A powerhouse of technique, craft and vision as good as any creative player, De Bruyne has improved his all-round game every season and the numbers he has racked up in recent season are nothing short of astonishing.

The France international, who joined Bayern from Juventus in 2017, has played a key role in the German side's success in recent seasons, famously netting the winner in their 1-0 victory over PSG in the Champions League final last season. After emerging through the youth ranks at Paris Saint-Germain, the...
PREMIER LEAGUE・14 DAYS AGO
Tribal Football

Manchester City will compete with Liverpool for Borussia Dortmund superkid Jude Bellingham. The Daily Star says with their Brazilian midfield general Fernandinho now 36 and only on a one-year extended contract, the Premier League champions' search for a long-term successor is well underway. And Borussia Dortmund star Bellingham, 18, is...
PREMIER LEAGUE・12 DAYS AGO
Tribal Football

Manchester City defender Ko Itakura is quickly winning over fans at Schalke. The Japan international is on-loan at Schalke after spending last season with FC Groningen in a similar temporary deal. “Ko is an absolute win for our team. He is characterised by his calm, " said S04 coach Dimitrios...
PREMIER LEAGUE・10 DAYS AGO
BBC

Who else? 100-club Salah your star man for Liverpool

Mohamed Salah was your man of the match in our Player Rater, as Jurgen Klopp's side beat Leeds 3-0 at Elland Road. Salah joined the Premier League 100 goals club after opening the scoring after 20 minutes.
PREMIER LEAGUE・11 DAYS AGO

Manchester City are ready to rival Liverpool for Borussia Dortmund midfielder Jude Bellingham. With Liverpool keen, BILD says the Premier League champions are also taking an interest in Bellingham. While City are also said to be closely monitoring Declan Rice, Bellingham has also apparently been identified as a potential replacement...
PREMIER LEAGUE・10 DAYS AGO
FanSided

UCL: Liverpool and Man City get underway against tough opponents

It’s Liverpool and Manchester City’s turn to get their UEFA Champions League campaigns underway on Wednesday, as the Reds face AC Milan and the Cityzens take on RB Leipzig, respectively. Liverpool looks to get back to their winning ways, having fallen out of the UCL to 13 times Champions Real...
PREMIER LEAGUE・9 DAYS AGO
Yardbarker

The requests of Franck Kessie have put talks over his renewal on stand-by with at least three clubs having shown interest, a report claims. According to Tuttosport (via MilanLive), the negotiation between Milan and Kessie for the renewal of his contract expiring in June 2022 is currently at a stalemate despite the fact that the Rossoneri have offered him a five-year contract with a salary going up from €5m plus bonuses to €6.5m plus bonuses in year four and five, therefore an incremental rise.
PREMIER LEAGUE・6 DAYS AGO

Kai Havertz has sent a warning to Premier League kingpins Manchester CIty and Liverpool amid speculation that Chelsea are to be title challengers in the 2021/22 season. Chelsea finished in fourth place in the 2020/21 season behind Manchester City, Manchester United and Liverpool, but the Blues did beat the league winners 1-0 in the Champions League final.
PREMIER LEAGUE・6 DAYS AGO
goal.com

VIDEO: How Mane brought up his century (U.S. only) Arsenal claimed three points against Burnley, but there are scuffles in the stands...
PREMIER LEAGUE・6 DAYS AGO
chatsports.com

The Serie A giants have been in “continuous” talks with the midfielder and his agent George Atangana as Premier League giants Liverpool and United monitor the situation ahead of the January transfer window. According to Ill Milanista, Tuttosport has reported it is “not a mystery” that the Premier League clubs...
PREMIER LEAGUE・4 DAYS AGO
Tribal Football

Crystal Palace defender Marc Guehi admits Liverpool were simply too ruthless on Saturday. Palace saw Liverpool take their chances to lose 3-0. Guéhi explained what makes Liverpool, in particular Mo Salah, such a threat: “He's so quick. Very quick, a very intelligent player. The way they play is very direct, they like to get the ball forward to their front players as quick as possible.
PREMIER LEAGUE・5 DAYS AGO

Liverpool boss Jurgen Klopp was full of praise for veteran James Milner's performance as a right-back against Crystal Palace. The absence of Trent Alexander-Arnold due to illness meant Milner had to fill in at the fullback position. The 35-year-old, who has played there on many occasions earlier in his career,...
PREMIER LEAGUE・4 DAYS AGO
Tribal Football

Liverpool ace Sadio Mane has compared Naby Keita's celebration against Crystal Palace to that of Eric Cantona. The Guinea international scored with a stunning volley as the Reds claimed a 3-0 win at Anfield. Mane took to Instagram to jokingly compare Keita's goal celebration to that of Cantona and his...
PREMIER LEAGUE・5 DAYS AGO
The US Sun

ARSENAL boss Mikel Arteta is under mounting pressure at the Emirates – and there are some top contenders to replace him. The heat was turned up a notch after Arsenal were beaten by Arteta’s former employers Manchester City in the Carabao Cup. PADDY POWER £20 RISK FREE FIRST BET*. Arsenal...
PREMIER LEAGUE・4 DAYS AGO
chatsports.com

The third round of the Carabao Cup gets underway tonight, with Liverpool's trip to Norwich the pick of the ties. Elsewhere, Manchester City host League One Wycombe while Everton travel to face QPR and Leeds face Fulham at Craven Cottage. Sportsmail's Kieran Jackson will provide live coverage of Norwich vs...
PREMIER LEAGUE・3 DAYS AGO
Daily Mirror

When is Carabao Cup fourth round draw? Details as Man City and Liverpool await opponents

The Carabao Cup third round saw plenty of thrills and spills earlier tonight. Ten ties took place this evening, with nine Premier League teams in action. Holders Manchester City, who have won the last four editions of the competition, survived a scare against League One Wycombe Wanderers before sealing a comprehensive 6-1 victory in a game where they trailed.
PREMIER LEAGUE・3 DAYS AGO
BBC

Jurgen Klopp declared Takumi Minamino to be in a “really good moment” after the forward scored twice in Liverpool’s 3-0 win at Norwich in the Carabao Cup.The Japan international made the most of his first appearance of the season, scoring after four minutes of the tie with a smart low shot before he added a second late on with another neat finish in the penalty area.Minamino sustained a thigh injury earlier in the month which was stated as the main reason behind his lack of minutes so far, but boss Klopp was full of praise for the 26-year-old following a...
WORLD・2 DAYS AGO
fourfourtwo.com