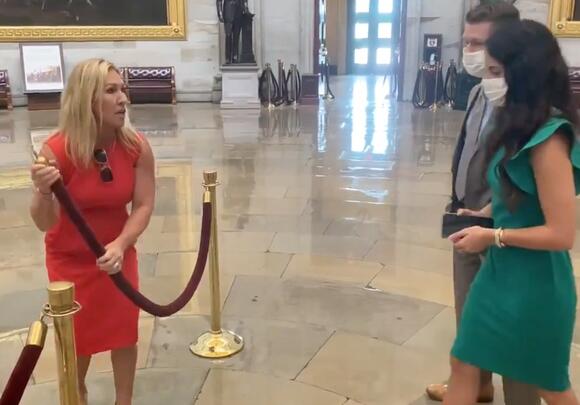 Marjorie Taylor Greene tried to make a mockery of the US Capitol’s mask rules by setting up a “Covid Checkpoint Charlie” in the Rotunda.

The Republican representative erected a fake barrier under the famous dome in the centre of the US Capitol to protest newly reinstated mask mandates.

In footage posted to Ms Greene’s Twitter account on Friday, she beckons two masked people to pass through the “checkpoint”, consisting of a rope and stand placed in the middle of the Rotunda.

“That’s the House side, Nancy Pelosi will have you arrested,” she whispers while smirking and shooting a glance at the camera.

“This is the Senate side, come on.”

Soon afterwards the rope and stands are taken away by security.

The reintroduction of compulsory mask use in the House has provoked days of performative outrage by Republicans.

On Thursday, 40 maskless Republican lawmakers including Ms Greene and Lauren Boebert burst into the Senate chamber to protest the regulations.

Ms Boebert is said to have thrown a face mask back at a congressional staffer after being asked to wear one and Ms Greene previously shredded a fine for refusing to wear a face covering.

The protests prompted the Capitol police chief Thomas Manger to order officers to report any members of Congress who refuse to wear a mask, warning they would be subject to arrest for unlawful entry under DC Code 22-3302.

The Congress mask mandate came as cases of the Delta variant are rising in all 50 states, and the Centers for Disease and Control Prevention advised vaccinated Americans living in areas of high or substantial transmission to wear masks when indoors.

On Thursday the World Health Organisation confirmed the US had the most reported new cases of any country in the world last week, with just over 500,000 people becoming infected with the virus.

Not a darn thing funny about her childish pranks, these are people making choices on behalf of the USA citizens, we're the ones that will suffer the consequences of their action. She is in need of a mental health evaluation ASAP!!!

Has ANYONE EVER seen her do any congressional work?? Her and Gaetz have been on a campaign fund raising tour since getting into office.

These clowns need something worthwhile to accomplish like washing and waxing the capitol floor , I know my money that goes to pay their salaries would be better spent!

Rep. Marjorie Taylor Greene earned some side eye from Steve Bannon when she claimed she’s the is “the most effective member of Congress.”. Speaking to the one-time adviser to former president Donald Trump on his “War Room” podcast, she made the claim that she’s the most effective member of Congress in the current session. Bannon stared straight at the camera, which led to immediate online comparisons to Jim from “The Office.”
CONGRESS & COURTS・1 DAY AGO
The Independent

Representative Marjorie Taylor Greene has called for the US government to be shut down, in bizarre comments made during an interview with Steve Bannon.The former political strategist to Donald Trump asked Ms Greene about the Democrat’s $3.5 trillion budget reconciliation bill during an interview for his War Room podcast on Thursday.Mr Bannon asked whether House Republicans had a plan to stop Democrats from passing the bill in the forthcoming weeks, to which Ms Greene replied that she hadn’t heard of any such plan yet. She then continued: "But I’ll tell you what I have to say, Steve: Shut...
CONGRESS & COURTS・1 DAY AGO
HuffingtonPost

In her first year as a member of the House, Georgia Republican Marjorie Taylor Greene has said a lot of outrageous things. But on Thursday, she said something that even Steve Bannon may have found hard to believe. Greene, who has said she believes in the QAnon conspiracy theory but...
CONGRESS & COURTS・1 DAY AGO

"Her rhetoric has endangered the lives of so many people," the Democratic congresswoman tweeted, attacking her Republican colleague.
CONGRESS & COURTS・21 HOURS AGO
Newsweek

Landon Copeland, who was charged in connection with the Capitol riot, doesn't expect a big turnout on Saturday unless Trump says to "go to the Capitol again."
PROTESTS・1 DAY AGO
Shore News Network

The House Committee on Energy and Commerce rejected a key drug pricing control bill in a stunning rebuke of House Speaker Nancy Pelosi and Democratic leadership. Democratic Reps. Kurt Schrader, Scott Peters and Kathleen Rice voted alongside their Republican colleagues on the panel, creating a 29-29 tie on the vote to pass the legislation during a committee hearing Wednesday. The hearing was held to mark up parts of Democrats’ sweeping $3.5 trillion budget reconciliation package, the Build Back Better Act.
CONGRESS & COURTS・2 DAYS AGO
Newsweek

"It is time for the Republican Party to denounce militia-ism," the GOP lawmaker urged.
CONGRESS & COURTS・2 DAYS AGO

Marjorie Taylor Greene will face another republican primary challenger in next year’s primary elections. Healthcare CEO Jennifer Strahan announced her intention to run for Georgia’s 14th Congressional District. Strahan identifies herself as a small business owner, a Christian, a wife, and a mother to a rambunctious boy. Strahan joins Republican...
ELECTIONS・2 DAYS AGO
Daily Mail

US election officials have asked Georgia Rep. Marjorie Taylor Greene to double check her numbers earlier this month after she reported raising more than $3.5 million in campaign contributions so small that she's not required to itemize them. A federal election law aimed at protecting the privacy of small-dollar donors...
ELECTIONS・2 DAYS AGO
Fox News

Georgia businesswoman Jennifer Strahan announced that she will run a primary campaign against Rep. Marjorie Taylor Greene on Wednesday, kicking off what is likely to be one of many closely-watched races between the extra-Trumpy wing of the GOP and more orthodox candidates. "I believe that there's a lot of people...
PRESIDENTIAL ELECTION・3 DAYS AGO
WashingtonExaminer

Republicans and former President Donald Trump will be nowhere near a rally planned for Saturday at the Capitol building by those who sympathize with the hundreds of Jan. 6 rioters charged and, in some cases, held in extended custody for trespassing and other offenses.
PROTESTS・1 DAY AGO

Greene has been a staunch supporter of former President Donald Trump's efforts in building a wall along the Southern border and has urged Biden to continue it.
CONGRESS & COURTS・2 DAYS AGO
Newsweek

Greene is the latest Republican to call for the chairman of the Joint Chiefs of Staff to face a military trial over reports about conversations with a Chinese general.
CONGRESS & COURTS・3 DAYS AGO
Business Insider

The Georgia lawmaker said that her GOP colleagues need to get their "asses in gear" and impeach President Joe Biden to win elections.
CONGRESS & COURTS・7 DAYS AGO
New Haven Register

Congresswoman Marjorie Taylor Greene (R- GA) went on the attack against her own party Friday and accused many Republicans of being so “weak” they could lose support leading into the midterms. Greene, who compared the House mask mandate to Nazi Germany and has pushed vaccine misinformation, tweeted that Republicans should...
CONGRESS & COURTS・8 DAYS AGO
The Independent

Marjorie Taylor Greene faces a $2500 fine for refusing to wear a mask in defiance of a House mandate.Ms Taylor Greene, who is suing over a $500 fine given for not wearing a mask a second time, was among several GOP protesters who spoke out against the mandate reinstated in July by the Office of the Attending Physician.Capitol police chief Thomas Manger ordered officers to report any members of Congress who refuse to wear a mask, warning they could be subject to arrest for unlawful entry under DC Code 22-3302.While Ms Taylor Greene wasn’t cuffed for going maskless, she...
CONGRESS & COURTS・9 DAYS AGO
Newsweek

Greene said people have the choice to opt out of medical experiments under the Nuremberg Code, which addressed Nazi war crimes.
PHARMACEUTICALS・9 DAYS AGO
Newsweek

Feds Ask Marjorie Taylor Greene to Account for Over $3.5M of Unitemized Donations

The Federal Election Commission has given the campaign of Rep. Marjorie Taylor Greene (R-Ga.) until October 12 to provide clarification about $3.5 million in campaign contributions it received during the first half of 2021.
CONGRESS & COURTS・11 DAYS AGO