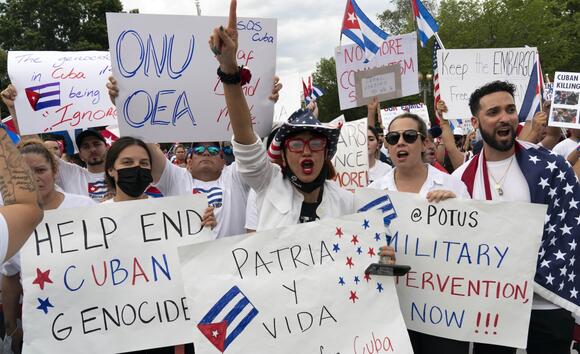 The Treasury Department announced sanctions on Cuba’s police force (known as the National Revolutionary Police), Director Oscar Cellejas Valcarce, and Deputy Director Eddy Sierra Arias. “In Camagüey, a Catholic priest was beaten and arrested by the PNR while he was defending young protesters; officers of the PNR also beat a group of peaceful demonstrators, including several minors,” according to a Treasury statement.

These follow sanctions levied by the administration last week targeting Cuba's defense minister and its special forces brigade for their role in a violent crackdown on protesters. “This is just the beginning,” Biden said in a statement at the time.

Biden has faced mounting pressure from lawmakers and activists to respond forcefully to human rights abuses by the Cuban government during recent protests on the island.

Outside the White House, crowds have gathered daily to call for stronger intervention.

“We've been listening to the protesters ... and we've been talking to members of the community,” this person said, adding that the administration wants to keep the focus on the Cuban people “and on the rights that they're demanding.”

He added: “The focus of the international community needs to be to stand up for them, to stand up for their rights, and to make sure that we're doing everything to support them, including by efforts to provide humanitarian assistance.”

The White House reiterated Biden's opposition to Cuba's "failed" communist government Friday. Administration officials were slow to rebuke the regime after protests broke out earlier this month. One top State Department official for the Western Hemisphere attributed the sweeping demonstrations to an outcry over a lack of COVID-19 vaccines.

"The president has been watching the events closely. As we stated before, he's made clear that Cuba is led by a failed and repressive regime, that communism is a universally failed ideology," White House principal deputy press secretary Karine Jean-Pierre said. "That's why, from the start, the president has said that addressing this moment was a priority for the administration."

Biden this week appointed Cuban American Frank Moro to be the next U.S. Ambassador to the Organization of American States, where, Jean-Pierre said, "we have and will continue to regularly urge the countries of the hemisphere to support the fundamental freedoms of the Cuban people."

With the deadline looming, the White House is starting to ramp up pressure on Republicans.
POTUS・23 HOURS AGO
WashingtonExaminer

The House of Representatives passed the Department of Defense’s 2022 budget, giving them a much larger sum for the next fiscal year than the Biden administration sought.
CONGRESS & COURTS・11 HOURS AGO
Reuters

Biden, Macron to meet in Europe in October -White House

WASHINGTON (Reuters) - U.S. President Joe Biden and French President Emmanuel Macron will meet in Europe in October, the White House said following a call between the two leaders earlier on Wednesday. Macron will also send France’s ambassador to the United States back to Washington next week “to start intensive...
POTUS・1 DAY AGO
chicagocrusader.com

More than 15,000 Haitians’ dreams of seeking asylum quickly turned into a nightmare after they illegally entered a small Texas town where they set up a tent city, only to be met with police barricades and threats of quick deportations. Their dream of coming to America for a better life...
CHICAGO, IL・21 HOURS AGO

Iranian President Ebrahim Raisi on Tuesday took sharp aim at the U.S. in a speech before the United Nations, saying America’s pledge to end wars is hollow because Washington is using sanctions as a mechanism of war. In pre-recorded remarks from Tehran, Mr. Raisi lashed out at President Biden and...
POTUS・2 DAYS AGO
WECT

(CNN) - The surge of Haitian migrants at the U.S. border is causing the Biden administration to look for some help with housing. The administration needs a contractor to staff the Guantanamo Bay migrant facility in Cuba. The request calls for at least 50 unarmed custody officers who can deploy...
IMMIGRATION・1 DAY AGO
Washington Times

DENVER — A pair of Colorado’s most prominent Democrats stand opposed to a National Park Service plan to lethally remove a dozen bison from Grand Canyon National Park, with Gov. Jared Polis backing a last-ditch effort to relocate them to southeast Colorado. The NPS plan, scheduled to kick off this...
DENVER, CO・1 DAY AGO

Sen. Mitt Romney called the Biden administration’s immigration policy a “monumental disaster,” and said that alone would be enough to leave the federal government “hanging on by a thread,” even if there were not so many other disasters. The Utah Republican also condemned a Democratic proposal to send monthly checks...
IMMIGRATION・2 DAYS AGO
New York Post

Members of the White House press corps protested to press secretary Jen Psaki Tuesday after President Biden declined to take questions during the public portion of his sitdown with UK Prime Minister Boris Johnson — instead allowing White House handlers to escort the press out even after Johnson showed up Biden by calling on two British reporters.
POTUS・2 DAYS AGO
Reuters

WASHINGTON, Sept 21 (Reuters) - U.S. President Joe Biden and British Prime Minister Boris Johnson on Tuesday discussed the dangers of climate change and bantered about the joys of rail travel during an Oval Office meeting aimed at underscoring the U.S.-British alliance. Johnson had once worried his warm relationship with...
POTUS・2 DAYS AGO

The White House imposed sanctions Tuesday against SUEX, a virtual currency exchange that enables users to trade cryptocurrency or other digital currencies, for its role in facilitating financial transactions for ransomware actors. Spearheaded by the Treasury Department's Office of Foreign Assets Controls (OFAC), the new commercial and financial penalties against SUEX are intended to punish the platform "for its part in facilitating financial transactions for ransomware actors, involving illicit proceeds from at least eight ransomware variants," according to Deputy Treasury Secretary Wally Adeyemo.
POTUS・2 DAYS AGO
peoriatimes.com

The League of Women Voters-Northwest Maricopa County along with a contingency of league members from across Arizona traveled to Washington, D.C., to make their voices heard on Aug. 24. “It was an honor to be advocating for all Arizonans and the people of our country so they can take part...
MARICOPA COUNTY, AZ・2 DAYS AGO
Washington Post

No, the White House did not ‘silence’ Biden with a mute ‘button’

“It’s been widely reported that somebody has the ability to push the button and cut off his sound and stop him from speaking. Who is that person?”. — Sen. James E. Risch (R-Idaho), questioning Secretary of State Antony Blinken during a hearing on Afghanistan, Sept. 14. Risch, the senior Republican...
U.S. POLITICS・9 DAYS AGO

Just 247 days since President Joe Biden took the keys to the Oval Office, a majority of people appear to want him evicted and former President Donald Trump back.
PRESIDENTIAL ELECTION・23 HOURS AGO
NBC News

WASHINGTON — Horses will no longer be used by Border Patrol officers in Del Rio, Texas, following the release of riveting photographs that showed agents on horseback charging at Haitian migrants seeking to cross into the U.S. White House press secretary Jen Psaki said the decision was made by Homeland...
DEL RIO, TX・19 HOURS AGO
bkreader.com

Members of the Congressional Black Caucus met Wednesday with several Biden administration officials to voice their concerns about the treatment of Haitian migrants at the Texas border, Congresswoman Yvette Clarke told Bk Reader. “They were very receptive to our message that, one, we were outraged by the position that the...
BROOKLYN, NY・17 HOURS AGO