Investors should sell stocks now as the risk of new lockdowns in the US is highly likely and could spark a market panic, Guggenheim's Minerd says 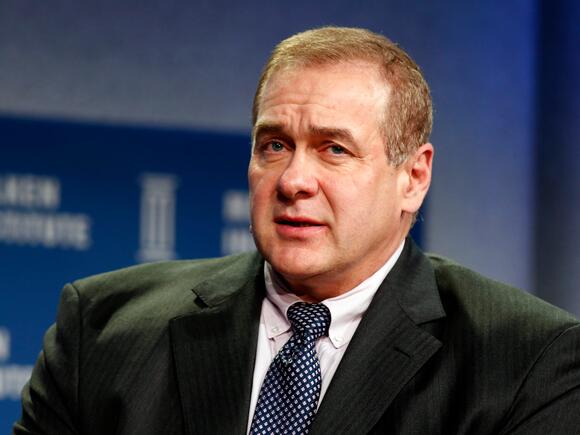 The rising threat of COVID-19's delta variant means now might be a good time for investors to take profits and sell, according to Guggenheim's Scott Minerd.

In a Friday note , the global chief investment officer said the spread of the variant, slowing of economic growth, and the extreme level of market valuations are "red flags" that suggest investors should consider de-risking.

"All in all, as far as markets and the economy are concerned, 'Things couldn't be better."'If that's the case, I guess it's probably time to sell!" the CIO said.

After publication of his note, he told CNBC that given the transmission rate of the Delta variant, the US could be back to peak levels of cases within two to three weeks, and its "highly likely" the US will impose lockdowns again. Those lockdowns could damage investor sentiment, he added.

Minerd also noted that the same "cognitive dissonance" that existed in the markets in February 2020 is present today. Similar to then, red flags are popping up everywhere about the dangers of COVID-19, yet the S&P 500 continues to reach new highs.

"I could be wrong about the outcome, but if people start to move beyond cognitive dissonance and transition to panic or even simply risk reduction, at current extreme valuations risk assets are in trouble," he warned.

Minerd added that even if Delta's spread is not as severe as last year's virus, investors can still expect significant volatility in the weeks and months ahead as the market prices in a rising level of uncertainty. He told CNBC the market could see a "severe correction" later this summer.

Crude oil shot up more than 3% in only one day amid rising demand and a supply disruption, while many oil and gas stocks were up even more.
STOCKS・23 HOURS AGO
The Motley Fool

3 Stocks That Could Be Worth $1 Trillion in 10 Years

We now live in a world where the word "trillion" is used quite frequently -- and not just when discussing the epic scale of government budgets. A few publicly traded companies have reached trillion-dollar valuations, and many more are worth hundreds of billions. Among these could emerge a new class of companies that join the 13-figure mega-market-cap club.
STOCKS・13 HOURS AGO
The Motley Fool

Keith Noonan covers technology, entertainment, and other fields. Holding positions in great companies long term could change your life. Amazon stock has surged roughly 40,000% over the last two decades, which means a $1,000 investment made in the company would now be worth roughly $400,000. Buying Netflix stock at its initial public offering back in 2002 would have yielded even better results, and a $1,000 investment in the entertainment company would now be worth about $492,000 based on today's stock price.
STOCKS・12 HOURS AGO
The Motley Fool

Cisco expects its growth to accelerate over the next few years. Ericsson will profit from Huawei and Nokia’s 5G missteps. Skyworks is a great Apple supply chain play -- but it’s also a solid long-term investment on connected cars and IoT gadgets. It might seem tough to find cheap tech...
STOCKS・11 HOURS AGO

Why this fund combination is better than the S&P 500

High-yield dividend stocks, when chosen carefully, can make you rich. A couple of REITs and energy stocks with yields as high as 8% look particularly tempting right now. Importantly, all of these are dividend growth stocks and can therefore offer sustainable high yields. Not many know what a powerful wealth...
STOCKS・11 HOURS AGO
The Motley Fool

These innovative stocks have been hit by short-term concerns, yet their outlooks remain as bright as ever. For nearly 18 months, investors have enjoyed a historic bounce-back rally in the stock market. After losing 34% in roughly a month during the first quarter of 2020, the benchmark S&P 500 has since doubled in value.
STOCKS・13 HOURS AGO
The Motley Fool

Should You Be Worried About a Stock Market Crash? Here's What the Data Suggests

A number of figures suggest a crash or steep correction is on the horizon. If you're invested for the long term, steep declines are an opportunity and not something to fear. Over the past 19 months, investors have witnessed history on both ends of the spectrum. They've navigated their way through the quickest decline of at least 30% in the history of the storied S&P 500 (SNPINDEX:^GSPC), and they've subsequently reveled in the strongest bounce-back rally from a bear market bottom of all time. Since bottoming out on March 23, 2020, the benchmark index has more than doubled in value.
STOCKS・1 DAY AGO

Got $1,000? Here Are 2 Unstoppable Dividend Stocks to Buy

Safe yields have become hard to find with the market near all-time highs, but they are out there. Johnson & Johnson is a top-notch name, and its 2.6% yield is arguably the safest in healthcare. Philip Morris International's market-crushing 4.9% yield is secure as the company transitions to a smoke-free...
STOCKS・12 HOURS AGO
Motley Fool

Oatly is now a broken IPO, but the shares remain overvalued for a food distributor in a niche that lacks differentiation. Stitch Fix has a lot to prove heading into this week's quarterly earnings report. American Airlines had a rough week on social media, but the future is equally choppy...
STOCKS・8 HOURS AGO
The Motley Fool

Over the long run, dividend stocks have vastly outperformed their non-dividend peers. These ultra-high-yield dividend stocks offer the right blend of stability and growth to generate serious income for investors. Although there is no shortage of strategies that can prove profitable on Wall Street, buying dividend stocks is arguably the...
STOCKS・1 DAY AGO
The Motley Fool

This high-growth semiconductor stock has an aggressive P/E ratio right now. This restaurant stock can produce great cash flow and growth if you buy on the dip. This fintech stock is slightly too expensive to be considered a value stock. Stocks are expensive right now, with the S&P 500 price-to-earnings...
STOCKS・9 HOURS AGO
The Motley Fool

This Exciting IPO Stock Has a $240 Billion Market Opportunity

We've seen quite a few property technology, or PropTech, companies go public over the past year or so, but one that has a particularly interesting market opportunity is Matterport (NASDAQ:MTTR). In this Fool Live video clip, recorded on Sept. 10, Fool.com contributors Matt Frankel, CFP, and Lou Whiteman discuss Matterport's business and growth potential.
STOCKS・13 HOURS AGO
Motley Fool

Short-term volatility creates buying opportunities for long-term investors. Coupa Software has built a strong moat around its business. This stock has the potential to grow tenfold in the next decade for two key reasons. Growth stocks tend to be volatile investments, and the market often overreacts to both their good...
STOCKS・1 DAY AGO
therealdeal.com

Investors continued to sell off shares in China’s real estate companies, wary of Beijing’s ongoing effort to stabilize the sector. The Hong Kong Stock Exchange’s property index, which tracks 52 real estate companies, fell 4.9 percent on Thursday to close at its lowest level since 2017, according to the Wall Street Journal.
REAL ESTATE・10 HOURS AGO
The Motley Fool

2 Stocks to Buy With Dividends Yielding More Than 4%

Reaching for yield can be a costly mistake for investors, but not all high yields are necessarily unsafe. Realty Income offers investors a steady, growing monthly stream of dividends at a 4.1% yield. Vici Properties' almost 5% yield is safe and poised to continue growing in the years ahead. One...
STOCKS・1 DAY AGO
CNBC

This Stock Could Be a 10-Bagger for Risk-Tolerant Investors

Seritage Growth Properties (NYSE:SRG) is a rather unique REIT (real estate investment trust). Rather than focusing on generating income, Seritage's goal is to redevelop a portfolio of money-losing properties into premier retail assets, creating value for shareholders in the process. In this Fool Live video clip, recorded on Sept. 3, Millionacres senior real estate analyst Matt Frankel, CFP, discusses why he's a shareholder and what investors should keep in mind.
STOCKS・1 DAY AGO
centralrecorder.com

THE Shiba Inu coin has spiked up in value as its rival DogeCoin drops. The value of the Shiba Inu coin has risen 21.3 percent this week and 21.1% in the last 24 hours. Meanwhile, the “meme” Dogecoin has gone down 5.8 percent over the last week. However, Dogecoin is...
COMMODITIES & FUTURE・1 DAY AGO
The Motley Fool

The company is securing partners to join its marketplace. This rapidly growing company is also winning in the battle for workers. The company's success is no secret to the market, which has responded by bidding up the stock price. DoorDash (NYSE:DASH) stock has been on fire lately. It's up 32%...
STOCKS・1 DAY AGO