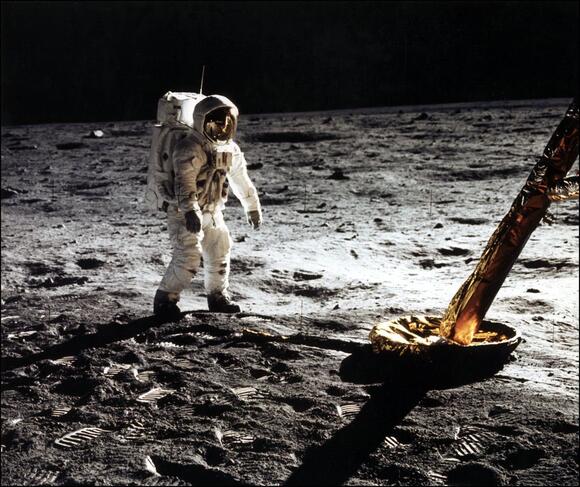 Nothing is certain in life but death, taxes, and paperwork. Even when you’re an astronaut.

Buzz Aldrin, the NASA astronaut who was the second man to walk on the moon, has revealed the US Customs form he had to sign after making his way back to Earth.

Instead of declaring his baggage or duty-free chocolate, the form mentions he’s bringing back “MOON ROCK AND MOON DUST SAMPLES.”

“Imagine spending 8 days in space, including nearly 22 hours on the Moon and returning home to Earth only to have to go through customs!” the famed space explorer tweeted this week.

According to Space.com, which first reported on the document, the trio of moon landing astronauts – Mr Aldrin, plus Michael Collins and Neil Armstrong – all filled out such a form on 24 July, 1969, after the Apollo 11 spacecraft splashed down into the Pacific ocean.

Though it looks official, it was meant as a bit of a joke.

“Yes, it’s authentic,” NASA spokesperson John Yembrick told the site. “It was a little joke at the time.”

The form also asks the astronauts if they are feeling sick or carrying any illnesses with the. They had to quarantine for weeks in a NASA trailer and wear special containment suits before rejoining the public.

These days, astronauts still have to fill out a customs form, of a more garden variety nature. International cooperation in space spans nations across the globe, with launches in the United States, Russia, and elsewhere.

Perhaps the forms will be updated for future attempts at exploring the moon. Former Amazon CEO Jeff Bezos intends to get humans back on the moon with his space company, Blue Origin, and recently flew on a test flight into the upper reaches of Earth’s atmosphere.

A Question Only Elon Musk Can Answer

On the day that SpaceX’s first space tourists launched, Elon Musk was there at Kennedy Space Center, in Florida, to see them off, cheering as the private astronauts walked to the Teslas that would take them to suit up. And after they landed safely, having orbited Earth about 45 times, Musk was there again to congratulate them in person.
AEROSPACE & DEFENSE・1 DAY AGO
scitechdaily.com

The lander cleared enough dust from one solar panel to keep its seismometer on through the summer, allowing scientists to study the three biggest quakes they’ve seen on Mars. On September 18, NASA’s InSight lander celebrated its 1,000th Martian day, or sol, by measuring one of the biggest, longest-lasting marsquakes...
ASTRONOMY・1 DAY AGO
The Independent

There were “challenges” with the toilet during SpaceX’s first entirely private trip to space, Elon Musk has revealed.The SpaceX chief executive did not elaborate on what those problems were, but said the future mission will “definitely” include “upgraded toilets” to ensure they did not happen again.Mr Musk revealed the problems on Twitter, after revealing that he had met with the crew after they touched down in Florida.Before the mission, much of the discussion had been about how good the toilet in the SpaceX Dragon capsule that carried the crew were set to be. They were situated just beneath the “cupola”,...
AEROSPACE & DEFENSE・1 DAY AGO
Wired

From Star Trek–like medical scanners to concepts for off-planet agriculture like in The Expanse, science fiction has often inspired actual research at NASA and other space agencies. This week, researchers are meeting at a virtual conference for the NASA Innovative Advanced Concepts (NIAC) program to brainstorm and investigate sci-fi-like ideas, some of which may very well shape the missions of the next 20 years.
AEROSPACE & DEFENSE・1 DAY AGO

United Nations secretary-general Antonio Guterres at the General Assembly on Tuesday tore into billionaires for joyriding to space while millions go hungry on Earth.Mr Guterres highlighted the gap between the rich and the poor in his opening speech and said a "malady of mistrust" is spreading across the globe as people strive to bring food to the table."I am here to sound the alarm. The world must wake up. We are on the edge of an abyss and moving in the wrong direction. Our world has never been more threatened or more divided," he said.Billionaires Jeff Bezos and Richard...
AEROSPACE & DEFENSE・2 DAYS AGO
Daily Mirror

As Brits begin to get ready for bed this evening, an asteroid larger than Big Ben's clock tower is set to crash through the Earth’s orbit, travelling at incredible speeds of 50,000mph. The rock, designated 2021RL3, is between 160 feet to 360 feet wide, is expected to come within 1,804,450...
ASTRONOMY・3 DAYS AGO
The US Sun

Nasa warns of incoming asteroid set to zip past Earth at 50,000mph TODAY

NASA'S has revealed than an asteroid larger than Big Ben is set to shoot past Earth today. The large space rock is set to make a close approach later this evening. Asteroid 2021RL3 is said to be anywhere between 160 feet to 360 feet wide. The Elizabeth Tower in central...
ASTRONOMY・3 DAYS AGO

Jeff Bezos on Monday promised to give away $1 billion in grants this year to support efforts around conservation. The pledge is part of the Bezos Earth Fund, the Amazon founder's $10 billion commitment to support scientists, activists and organizations working to address climate change. In the coming years, the...
ADVOCACY・3 DAYS AGO
Spaceflight Now

Four civilian space travelers back on Earth after landmark flight

If you would like to see more articles like this please support our coverage of the space program by becoming a Spaceflight Now Member. If everyone who enjoys our website helps fund it, we can expand and improve our coverage further. Four civilian space travelers rode a SpaceX capsule through...
AEROSPACE & DEFENSE・6 DAYS AGO
mymodernmet.com

Like many of us, visual effects artist Michael Ranger grew up with the iconic photos of the Apollo 11 mission. Neil Armstrong's famous photograph of Buzz Aldrin walking on the moon is a testament to what humanity can achieve. So when Ranger realized that he could give a different perspective on the image, he was understandably excited.
PHOTOGRAPHY・6 DAYS AGO
healththoroughfare.com

Astronomers had always been hoping to intercept signals coming from advanced alien species. Exoplanets that have similar traits to Earth are likely the ideal places for finding life. According to TweakTown.com, researchers have found very clear signals coming from a star system that contains a planet similar to our own....
ASTRONOMY・10 DAYS AGO

BOULDER, Colo. (CBS4) – CU Boulder is about to put a CUTE spin on space exploration. The CUTE Satellite, short for Colorado Ultraviolet Transit Experiment, is no bigger than a box of cereal but will spend 7 months exploring planets outside our solar system. CUTE will launch on September 27th on the back of a United Launch Alliance Atlas V rocket from Vandenberg Space Force Base in Southern California. The satellite, according to principal mission investigator Kevin France, cost around $4 million and is only about as big as a “family-sized box of Cheerios.” (credit: University of Colorado) “It’s an experiment that NASA...
BOULDER, CO・11 HOURS AGO
Long Beach Post

There are more than 27,000 pieces of “space junk” being tracked by the U.S. Department of Defense as they orbit the Earth, according to NASA. In 2023, Rocket Lab will launch a demonstration satellite meant to remove orbital debris, the Long Beach-based company announced Tuesday. The post Rocket Lab to launch ‘sustainable space’ demonstration satellite appeared first on Long Beach Post.
LONG BEACH, CA・2 DAYS AGO
KGUN 9 Tucson News

The idea of space mining is growing popular. Engineers at the University of Arizona are mapping out a plan to harvest the moon's resources. The research team received a $500,000 two-year grant from NASA to advance space mining methods.
ASTRONOMY・11 HOURS AGO
WashingtonExaminer

The new Space Force uniforms are some of the most bizarre ensembles under the sun, according to some Twitter users.
MILITARY・2 DAYS AGO
thedrive

The RC-135 Combat Sent slams down before its left wing dips dangerously low and the jet goes careening down the runway. On September 7, 2021, an RC-135U Combat Sent electronic intelligence-gathering aircraft, one of just two in existence, made a frightening crosswind landing at RAF Mildenhall in England. The RC-135 had returned from an intriguing mission that saw the spy plane circumnavigate the border of Russia's Kaliningrad exclave.
AEROSPACE & DEFENSE・4 DAYS AGO
Andrei Tapalaga

The Only Man to Be Buried on the Moon

Eugene Shoemaker (Source: Atlas Obscura) Humanity has seen only a handful of people that actually had the honor to step on earth’s natural satellite, but at present, there is only one person who is “buried” on an astronomical body orbiting Earth. The name of the soul that now rests on the Moon is Eugene Shoemaker, an astrogeologist who had worked with NASA since the 1960s and became famous when a comet that crashed on Jupiter in 1994 received his name (Shoemaker-Levy Comet).
2021-01-25
The Week

'This is a dream find': Scientists' 'bombshell' discovery in the 'peopling' of America

"Astonishingly old" human footprints preserved in the ground across New Mexico's White Sands National Park have been determined to date back about 23,000 years to the Ice Age, a finding which, if certified, "would rejuvenate the scientific debate about how humans first spread across the Americas," The New York Times reports.
SCIENCE・15 HOURS AGO
ScienceAlert

As the polar ice sheets melt, the process is not just raising sea levels – it's also warping the underlying surface of Earth, a new study reveals, and some of the effects can be seen across thousands of miles. What's happening is that Earth's crust is rising and spreading as the weight of the ice across Greenland, Antarctica, and the Arctic Islands gets lifted. The movement isn't huge, averaging less than a millimeter a year, but it's there and it covers a lot of ground. There's a feedback loop happening too, because as the bedrock under the ice shifts, that in turn...
EARTH SCIENCE・12 HOURS AGO