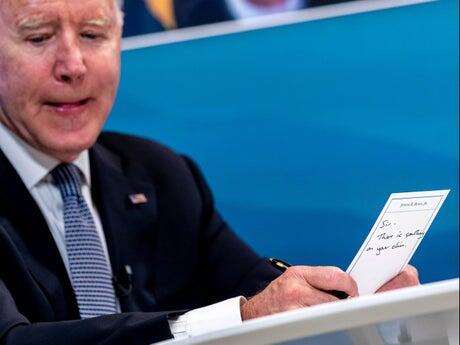 Joe Biden was caught-off guard on Friday and had to be told there was something on his chin by an aide.

The US president, who was in a meeting with governors and officials, received a card with a hand written note saying: “Sir, there is something on your chin”.

The incident, which happened as his vice president Kamala Harris was addressing officials on the issue of wildfires, was caught on camera – and immediately went viral on social media.

Mr Biden appeared to eventually remove whatever was on his chin, and was seen rubbing his face to remove the speck, and also licking his lips. Some Twitter users suggested the substance was mustard, but it remains unclear.

Ms Harris continued talking throughout the saga, seemingly unaware that the president had been pictured with the hand written note by an aide.

On Twitter, the mishap was ridiculed by his critics, who refereed to his old-age – a frequent taunt of his predecessor, Donald Trump, who frequently made gaffs of his own while in office.

A clip of Mr Biden’s incident also found its way onto the Twitter page of the Republican National Committee’s data team, RNC Research, where it was mocked.

“After a staffer gives Joe Biden a note saying, ‘there’s something on your chin,’ Biden wipes his chin,” tweeted the account, “[He] Then appears to put whatever was on his chin in his mouth?”

Others were more sympathetic and said of Mr Biden’s aide: “Wish all people would be this kind”.

It follows Mr Biden excused himself of a “Freudian slip” this week, after he confused Mr Trump and former president Barack Obama in a speech on the US economy. It was also widely ridiculed by Republicans.

What amazing me with these reports on Biden is how Sympathetic the media is towards him. Why not talk about him as you did president Trump and start demanding that he is tested to find out if he is mentally stable enough for his duties ? I guess y’all are going to wait until he shows up naked to a press conference right

Biden is having so many senior moments in public. At least he did not whisper to reporters this time and forget the entire agenda of what he was supposed to say. He remembered to consult his cue cards.

You know that the only people who will miss him when he dies are Vladamir Putin, Chairman Xi,. Dr Mengele Fauci, Iranian Clerics, and Al-qaida

Kamala Harris Would Become President If The 25th Amendment Gets Invoked

In a recent tweet, Sen. Rick Scott (The GOP Campaign Chairman) made a statement that caused a lot of debate around the country. "After the disastrous events in Afghanistan, we must confront a serious question: Is Joe Biden capable of discharging the duties of his office, or has the time come to exercise the provisions of the 25th Amendment?"
1 DAY AGO
Newsweek

Trump reportedly knew Pence had no plans to send the election results back to states before he addressed his supporters on January 6 but continued the pressure.
PRESIDENTIAL ELECTION・1 DAY AGO
Shore News Network

U.S. Speaker of the House Nancy Pelosi gave President Joe Biden a rave review in light of his botched withdrawal from Afghanistan that left 13 American service members dead. “Let me just say about our president, President Biden…President Biden is…It’s so…we’re so fortunate that he did not win for president before when he ran because we needed him now. He’s perfect for now,” Pelosi said. “He knows his foreign policy he was chair of the foreign policy committee he’s been…extends the hands of friendship to friend and foe alike in order to have communication…He understands the value of that, he is…he knows and is known by most leaders.”
U.S. POLITICS・1 DAY AGO
Newsweek

Donald Trump was defeated by Joe Biden by 11,779 votes in Georgia, and officials have found no evidence of widespread voter fraud.
GEORGIA STATE・1 DAY AGO

Knox County Mayor to President Biden: 'Knox County will not comply with your mandate'

U.S. Representative James Clyburn (D-S.C.) said he pressed President Joe Biden about nominating a Black woman to the Supreme Court before he gave his endorsement. Clyburn confirmed reports that he pressed Biden in advance of the Democratic Primary debate last February on Bloomberg TV’s Balance of Power. At the end of the debate, Biden expressed his desire to name the High Court’s first Black female justice.
CONGRESS & COURTS・1 DAY AGO
WashingtonExaminer

President Joe Biden’s White House Counsel will have to decide whether to shield Trump White House material from investigators.
PRESIDENTIAL ELECTION・1 DAY AGO
The Guardian

Donald Trump is out of a job but far from gone and forgotten. The 45th president stokes the lie of a rigged election while his rallies pack more wallop than a Sunday sermon and a bottle of Jack Daniel’s. “We won the election twice!” Trump shouts. His base has come...
POTUS・1 DAY AGO
Reuters

(Reuters) - Former U.S. President Donald Trump might make another White House run in 2024, but if he does, he will take his place in American history as a two-time loser, House of Representatives Speaker Nancy Pelosi predicted on Thursday. Visiting England for a meeting of parliamentary leaders from G7...
PRESIDENTIAL ELECTION・2 DAYS AGO

America went from the strongest Presidency since Ronald Reagan to its weakest since Barak Obama in just eight months. I believe Joe Biden was the worst President by days end on January 20, when he signed away many American freedoms. But it took an international debacle of his doing to show a world his lack of empathy and feeble ways.
PRESIDENTIAL ELECTION・3 DAYS AGO
Newsweek

Previously, the senator reportedly told Trump he had been "written off as dead" because of the U.S. Capitol riot.
POTUS・2 DAYS AGO
The Associated Press

WASHINGTON (AP) — It was an hour President Joe Biden would no doubt like to forget. On Friday, the Pentagon acknowledged that a drone strike in Afghanistan killed 10 civilians, including seven children, not terrorists. A panel advising the Food and Drug Administration voted to not recommend COVID booster shots for all Americans over 16, dashing an administration hope. And France announced it was recalling its ambassador to the U.S. out of anger for being cut out of a secret nuclear submarine deal Biden had struck with the United Kingdom and Australia.
PRESIDENTIAL ELECTION・1 DAY AGO
The Guardian

The US secretary of state, Antony Blinken, fought back laughter on Capitol Hill on Tuesday as the Republican senator James Risch relentlessly questioned him about a rumor that someone on the White House staff “pushes the button and cuts [Joe Biden] off mid-sentence” with a wireless device. “Somebody in the...
CONGRESS & COURTS・2 DAYS AGO
POLITICO

Larry Elder's landslide defeat is the latest evidence that the idea the 2020 presidential election was stolen is poison for Republicans.
PRESIDENTIAL ELECTION・2 DAYS AGO
WashingtonExaminer

US lawmakers will dive into the busiest legislative period in years in the coming week, with President Joe Biden counting on a united front from Democrats to pass make-or-break spending bills that he hopes will improve his sagging approval ratings.  Biden said in a speech Thursday he was confident Congress would pass the plan, characterizing it as a moment that could "change the trajectory of our country for years or decades to come."
CONGRESS & COURTS・10 HOURS AGO
Fox News

Ingraham: 'Fencing off the Capitol and Milley'; Biden governs on 'need-to-know basis', lied about transparency

In her "Ingraham Angle" monologue on Friday, host Laura Ingraham described how President Joe Biden and his Democratic Party are proverbially circling the wagons around their own, as crises and distrust mount. "Fencing off the Capitol; and Milley," she said. "From moment he decided to run for president, Biden has...
PRESIDENTIAL ELECTION・1 DAY AGO