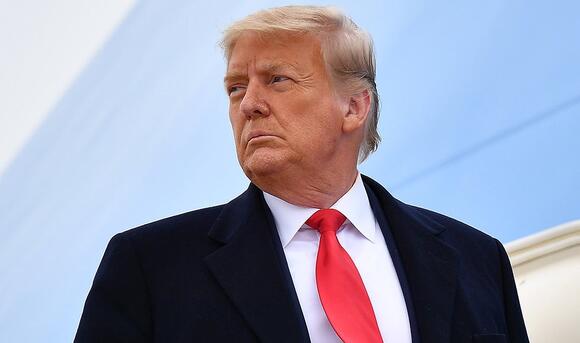 In a memo from the Justice Department's Office of Legal Counsel (OLC), acting Assistant Attorney General Dawn Johnsen said the Treasury Department was required to defer to the congressional committee.

“The statute at issue here is unambiguous: ‘Upon written request’ of the chairman of one of the three congressional tax committees, the Secretary ‘shall furnish’ the requested tax information to the Committee,” Johnsen wrote in the 39-page memo.

If the committee receives Trump's tax returns, it can examine the documents in a closed session. It could then vote to release a report to the full House, making some or all of the documents public.

The Trump administration refused to comply with the request and subpoenas, prompting the committee to file a lawsuit.

The OLC memo comes on the same day that a court filing is due in the lawsuit. The committee and the Biden administration had been having discussions for several months about the case and said in a filing earlier this month that they would tell the court by July 30 whether they had reached an agreement.

The OLC memo notes that in June, Neal sent Treasury an updated request for Trump’s tax returns, with the new request seeking documents for 2015 to 2020 as opposed to 2013 to 2018 in the initial request.

The new request reiterates that the committee wants Trump’s tax returns to examine how the IRS audits presidents, and also states that lawmakers are interested in potential business entanglements and foreign influences on Trump as they consider future legislation.

“Applying the proper degree of deference due the Committee, we believe that there is ample basis to conclude that its June 2021 Request for former President Trump’s tax information would further the Committee’s principal stated objective of assessing the IRS’s presidential audit program—a plainly legitimate area for congressional inquiry and possible legislation,” Johnsen wrote.

Reporting from The New York Times last year, after obtaining tax return data for the president over two decades, found that Trump paid no income taxes in 10 of the 15 past years and only paid $750 in taxes in both 2016 and 2017.

The Times also found a 2010 tax refund of $72.9 million was under audit by the IRS. Trump has long pointed to his audit by the IRS to claim he is unable to release his tax returns, a departure with long-standing precedent for presidential candidates.

The Friday memo is a reversal from the Justice Department's conclusions under the Trump administration, which advised Treasury that Neal’s request lacked a legitimate legislative purpose.

Then-OLC head Steven A. Engel called the Ways and Means investigation “a pretext, and that the Committee ha[d] requested the ... information for the purpose of public release— which we agree is not a legitimate legislative purpose.”

The DOJ memo from the Biden administration says that the opinion issued during the Trump administration was incorrect “in suggesting that the Executive Branch should closely scrutinize the Committee’s stated justifications for its requests in a manner that failed to accord the respect and deference due a coordinate branch of government.”

“As I have maintained for years, the Committee’s case is very strong and the law is on our side,” he said in a statement. “I am glad that the Department of Justice agrees and that we can move forward.”

The Biden administration’s opinion does not spell the end for the litigation over the Trump tax return request.

Trump is participating in the court case over the tax-return request in his personal capacity, and his lawyers have expressed an interest in having their arguments heard in court before the former president’s tax returns are turned over to the Ways and Means Committee.

Judge Trevor McFadden, a federal judge in Washington D.C., appointed by Trump, has ordered the Biden administration to give Trump’s lawyers 72 hours notice before giving any of the former president’s tax returns to the committee. That order is currently set to expire Aug. 3.

Democratic lawmakers applauded the turnaround from the Justice Department, which enables a line of inquiry long blocked by prior department leaders.

“Today, the Biden Administration has delivered a victory for the rule of law, as it respects the public interest by complying with Chairman Neal’s request for Donald Trump’s tax returns. As Speaker, on behalf of the House of Representatives, I applaud Chairman Neal for his dignified pursuit of the truth and the Biden Administration Department of Justice for its respect for the law,” House Speaker Nancy Pelosi (D-Calif.) said in a statement.

“Access to former President Trump’s tax returns is a matter of national security. The American people deserve to know the facts of his troubling conflicts of interest and undermining of our security and democracy as president.”

Apparently they found some people who will either flip, snitch, and/or have dirt on him to send for the records.

WASHINGTON, Sept 14 (Reuters) - The top U.S. general secretly called his Chinese counterpart twice over concerns then-President Donald Trump could spark a war with China as his potential election loss loomed and in its aftermath, the Washington Post reported on Tuesday. U.S. General Mark Milley, chairman of the Joint...
FOREIGN POLICY・1 DAY AGO
WashingtonExaminer

A good sign that the political right recognizes that the shaky state of the coronavirus pandemic is a function of the unvaccinated is that it is energetically trying to cast that group as largely composed of members of the political left. Former president Donald Trump, for example, told Fox News...
POTUS・3 DAYS AGO
Business Insider

GOP Sen. Pat Toomey says that Trump should not be the party's 2024 presidential nominee, slams his 'unacceptable' behavior

"I think that the future of our party is to be a party of ideas, and not to be a party about any one individual," Toomey said in a CNBC interview.
PRESIDENTIAL ELECTION・12 DAYS AGO

CALIFORNIA SPLIT — Remember this moment, because it might be a point of no return. The aftermath of today’s California recall vote appears likely to herald the arrival of a new stage of election trutherism, in which large numbers of voters — and candidates — insist ordinary elections are rife with fraud and refuse to acknowledge the legitimacy of the outcome.
CALIFORNIA STATE・1 DAY AGO
Newsweek

‘He shouldn’t be lecturing anybody!’: Trump blasts Bush over Capitol riot remark on 9/11

​Former President Donald Trump on Monday lashed out at George W. Bush for his 9/11 20th anniversary speech in which he appeared to compare the Jan. 6 rioters to foreign terrorists, saying the 43rd president, who was in office when the 9/11 attacks happened, “shouldn’t be lecturing anybody!”. “​So interesting...
POTUS・3 DAYS AGO
MSNBC

Lawrence O’Donnell explains Donald Trump’s history of lying about 9/11 and why Donald Trump is afraid to repeat his worst lie.Sept. 15, 2021.
POTUS・1 DAY AGO

Donald Trump Jr. has said the Taliban respected his father's "strength" and the former president had the "brainpower" necessary to negotiate with the group that now controls most of Afghanistan. Former President Donald Trump's eldest son told Fox News' Sean Hannity on Wednesday that his father "exuded strength" and said...
POTUS・7 DAYS AGO
NBC Connecticut

Sen. Pat Toomey has urged his party not to nominate former President Donald Trump as its presidential nominee in 2024. The Pennsylvania Republican voted to convict Trump in the impeachment trial over his role in stoking the Jan. 6 insurrection at the Capitol. "I think after what happened post-2020 election,...
IMMIGRATION・13 DAYS AGO
POLITICO

Former President Donald Trump said Gen. Mark Milley may have committed treason with secret calls to China at the end of his administration.
POTUS・1 DAY AGO
checkyourfact.com

A post shared on Facebook claims that Vice President Kamala Harris was arrested in Singapore and that a new vice president has been announced. While Harris did recently travel to Singapore, she was not arrested during her trip. She has not been replaced as vice president. Fact Check:. Harris traveled...
CONGRESS & COURTS・23 HOURS AGO
Shore News Network

The House Committee on Energy and Commerce rejected a key drug pricing control bill in a stunning rebuke of House Speaker Nancy Pelosi and Democratic leadership. Democratic Reps. Kurt Schrader, Scott Peters and Kathleen Rice voted alongside their Republican colleagues on the panel, creating a 29-29 tie on the vote to pass the legislation during a committee hearing Wednesday. The hearing was held to mark up parts of Democrats’ sweeping $3.5 trillion budget reconciliation package, the Build Back Better Act.
CONGRESS & COURTS・5 HOURS AGO
USA TODAY

I’d encourage Americans to get vaccinated, as I did. But that choice is theirs to make – not the federal government’s: South Dakota Gov. Kristi Noem
PUBLIC HEALTH・8 HOURS AGO
CNN

The Big Lie is (unfortunately) winning

(CNN) — It is 100% true that Joe Biden won the 2020 election. And that Donald Trump lost it. Unfortunately, in recent months, the Big Lie -- that Trump somehow was defrauded out of the election -- has gained increasing amounts of traction, according to a new CNN poll. In...
PRESIDENTIAL ELECTION・21 HOURS AGO
Washington Post

Ever since Mike Pence announced on Jan. 6 that he lacked power to help Donald Trump overturn the 2020 election in Congress, it’s been widely suggested that the vice president was one of the few heroes in this ugly tale. But new revelations in the forthcoming book by Post reporters...
POTUS・1 DAY AGO
Reuters

(Reuters) - Former U.S. President Donald Trump might make another White House run in 2024, but if he does, he will take his place in American history as a two-time loser, House of Representatives Speaker Nancy Pelosi predicted on Thursday. Visiting England for a meeting of parliamentary leaders from G7...
PRESIDENTIAL ELECTION・3 HOURS AGO
Fox News

As Democrats charge ahead with writing their massive $3.5 trillion spending bill, which they aim to pass on a party-line vote through budget reconciliation, at least one moderate Republican is warning the bipartisan infrastructure bill may lose GOP votes because it's too intertwined with the reconciliation bill. "I think Nancy...
CONGRESS & COURTS・8 HOURS AGO