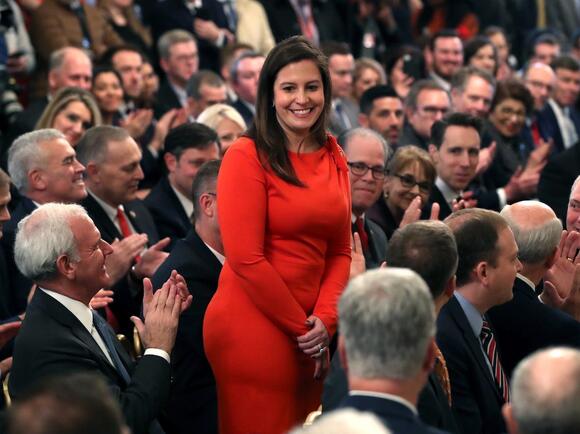 Stefanik, who recently replaced Rep. Liz Cheney as the number three House Republican, called on Americans "to reflect on the critical role these programs have played to protect the healthcare of millions of families" on the 56th anniversary of the two healthcare programs. But, she added, "to safeguard our future, we must reject Socialist healthcare schemes."

Critics quickly pointed out the irony in celebrating the government programs, while arguing that expanding them would lead to "socialism." Ocasio-Cortez poked fun at Stefanik's remarks by urging the Republican to support Medicare-for-all to "own the socialists."

"Totally agree," Ocasio-Cortez tweeted , sharing Stefanik's message. "In fact, to further protect Medicare from socialism, let's strengthen it to include dental, vision, hearing, & mental healthcare and then allow all Americans to enjoy its benefits. Trust me, Medicare for All is the #1 thing you can do to own the socialists."

Other critics pointed out the contradiction in calling Medicare and Medicaid "critical" in protecting healthcare, but simultaneously denouncing any efforts to ensure more Americans benefit from the programs.

Major government social safety net programs, including Medicare, Medicaid, and Social Security, were denounced by many conservatives as "socialism" when Congress signed them into law more than a half-century ago. In the 1960s, Ronald Reagan claimed that Medicare would lead to socialism.

But in the decades since, these government programs have come to be embraced by the vast majority of Americans, including many conservatives. Former President Donald Trump repeatedly promised to protect all three programs during his 2016 presidential campaign. But once in office, he proposed massive cuts to the programs, none of which were passed by Congress.

what is good for the government and their Healthcare should be the same for the people. Give them the same insurance we do and everything would be fixed.

We as Americans are built on the principle strong servive weak die. Work for your money. No free handouts.We are a corporate society. Or we were. Until socialism took hold.

listen,Cortez is a space cadet! she has space between her ears! she doesn't live in the real world!

A least one Capitol Police officer reportedly later disclosed the "secure location" that lawmakers were evacuated to on January 6.
CONGRESS & COURTS・4 DAYS AGO
People

"I usually know my questions of power are getting somewhere when the powerful stop referring to me as 'Congresswoman' and start referring to me as 'young lady' instead," the progressive lawmaker wrote on Twitter. New York Rep. Alexandria Ocasio-Cortez is taking fellow Democrat Joe Manchin to task for what she...
CONGRESS & COURTS・5 DAYS AGO
The Independent

Alexandria Ocasio-Cortez has explained why she attended this year’s Met Gala after people questioned the political message behind her outfit choice. The white gown, which was made by Brother Vellies designer Aurora James, featured ‘tax the rich’ printed in red letters on the back of it.Ocasio-Cortez told Vogue that she and James came up with the outfit after “having a conversation about what it means to be a working class woman of colour at the Met”.She added: “We said we can’t just play along, but we need to break the fourth wall and challenge some of the institutions.”Many people...
CONGRESS & COURTS・5 DAYS AGO
HuffingtonPost

New York City — Congresswoman Alexandria Ocasio-Cortez made her Met Gala debut with a bold political statement in New York City on Monday. The theme of the 2021 Met Gala was "In America: A Lexicon of Fashion." Many celebrities, politicians, athletes and other prominent figures came in various designer outfits of what they define as America.
NEW YORK CITY, NY・5 DAYS AGO
Times Union

SARATOGA — Democrats are lining up to run against Elise Stefanik, for obvious reasons. The congresswoman from the North Country has provided potential opponents with plenty of material. But can any of the announced candidates actually beat the town of Saratoga Republican?. The Magic 8-Ball says ... outlook not so...
ALBANY COUNTY, NY・6 DAYS AGO
WashingtonExaminer

A former CIA officer announced a 2022 campaign to unseat Rep. Elise Stefanik from her position representing New York's 21st Congressional District. Matt Castelli, a Democrat, posted a video to declare his candidacy, accusing Stefanik of betraying her oath to protect the Constitution during the Jan. 6 riot at the U.S. Capitol when Trump supporters swarmed the building as lawmakers certified President Joe Biden's victory.
CONGRESS & COURTS・11 DAYS AGO
MarketRealist

Alexandria Ocasio-Cortez, the young Democratic representative from New York, has done anything but sit quietly during her first few years in office. Her strong opinions and unflinching way of expressing them have garnered strong criticism as well as loyal supporters. Article continues below advertisement. "AOC," as Ocasio-Cortez is often called...
CONGRESS & COURTS・5 DAYS AGO

Democrats can’t use their $3.5 trillion package bolstering social and climate programs to give millions of immigrants a chance to become citizens, the Senate’s parliamentarian said late Sunday, a crushing blow to what was the party’s clearest pathway in years to attaining that long-sought goal.The decision by Elizabeth MacDonough, the Senate’s nonpartisan interpreter of its often enigmatic rules, is a damaging and disheartening setback for President Joe Biden congressional Democrats and their allies in the pro-immigration and progressive communities. It badly damages Democrats’ hopes of unilaterally enacting — over Republican opposition — changes letting several categories of immigrants gain permanent residence and possibly citizenship. MacDonough's decision was described by a person informed about the ruling who would describe it only on condition of anonymity.
CONGRESS & COURTS・10 HOURS AGO
POLITICO

Sen. Joe Manchin has only grown bolder in his opposition to spending $3.5 trillion to transform social programs, prompting irritation in his caucus.
CONGRESS & COURTS・2 DAYS AGO
kfgo.com

WASHINGTON (Reuters) -Mitch McConnell, the Senate’s top Republican, has told Treasury Secretary Janet Yellen that congressional Democrats will have to raise the U.S. debt ceiling on their own, even as she warns of a default and new financial crisis if lawmakers do not raise the federal borrowing limit. McConnell spokesman...
CONGRESS & COURTS・3 DAYS AGO
WashingtonExaminer

Biden: 'I refuse to give into' Republicans practicing the 'worst kind of politics' on COVID

Democrats did not make much of a fuss when federal unemployment compensation expired this month for 7.5 million workers. After all, President Joe Biden had said it was appropriate for the extra benefits to expire. But on Wednesday, Rep. Alexandria Ocasio-Cortez (D-N.Y.) announced she would introduce a bill to bring...
CONGRESS & COURTS・4 DAYS AGO
Washington Post

It makes for uncomfortable TV. Republicans get really grumpy. Republicans who enabled former president Donald Trump right up to the 2020 election — or beyond — do not like to admit complicity in the rise of a dangerous authoritarian movement. That, however, does not mean the rest of us should forgive and forget.
POTUS・6 DAYS AGO
HuffingtonPost

WASHINGTON — As the leading advocate for Fort Drum and the 10th Mountain Division in the U.S. House of Representatives, I am proud to have secured several provisions last week in the National Defense Authorization Act for fiscal year 2022 that will benefit Fort Drum, our north country military families and veterans, and our defense stakeholders throughout New York’s 21st Congressional District.
FORT DRUM, NY・9 DAYS AGO
KXAN

The words Trump couldn't bring himself to say

(CNN) — On November 7, 1962, Richard Nixon met with reporters to concede that he had lost his bid for governor of California -- and to grumble about the way the press covered his campaign. It was two years since he had lost his race for president against John F. Kennedy, and few thought Nixon would ever run for office again.
POTUS・22 HOURS AGO
b975.com

One of the seven Republican senators who voted to convict Donald Trump at his second impeachment trial warned on Sunday that the former president’s “bullying” of the party would lead to electoral defeat in next year’s midterms and beyond. Bill Cassidy of Louisiana was speaking days after the Ohio Republican...
NFL・16 HOURS AGO