Apple Watch Series 7: All there is to know about Apple’s latest watch 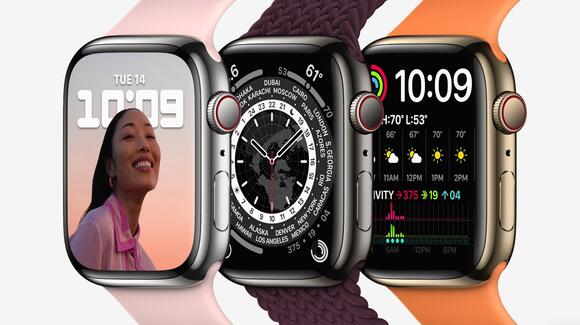 Apple’s latest and greatest smartwatch is here. The Apple Watch Series 7 was announced at the company’s California Streaming event, which is also where Apple launched the iPhone 13 series .

The device offers a new, larger display, along with a series of new features that help make it arguably the best smartwatch ever released. Safe to say, even if you have an Apple Watch Series 6 , you may want to upgrade to the Apple Watch Series 7, depending on what’s important to you.

Interested in learning more? Here’s everything you need to know about Apple’s latest smartwatch.

The new watch starts at $399, and it’s now available for purchase online and in-store. It is available in a range of colors, including the same stainless steel finishes. You can get the device for yourself using the links below. 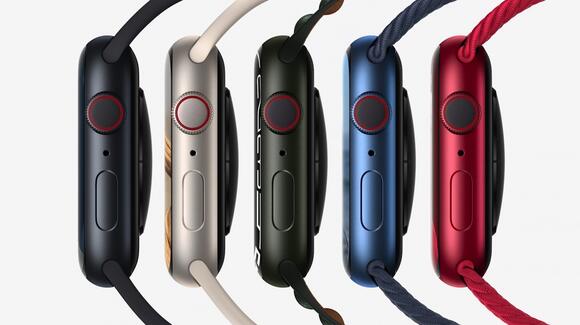 Apple usually brings redesigns to its devices every three years or so, and this is the year for the Apple Watch . Unlike the rumors, however, the new device doesn’t have the flat edges that some were expecting. Instead, the device has a larger display with slimmer bezels than before. The overall look of the device, however, remains more or less the same.

The device also has a new more crack-resistant front display, plus it has IP6X dust resistance and the device is still swim-proof. The device is also compatible with all previous watch bands. 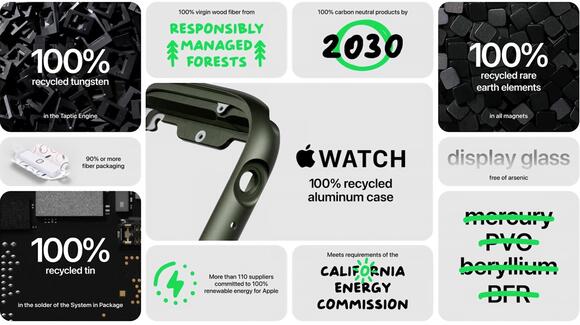 The watch doesn’t offer too many major upgrades in terms of specs, but it should still be able to handle pretty much everything you can throw at it in day-to-day use. That includes fitness tracking, and there are a few new workouts in watchOS 8, including support for e-bikes.

The device charges faster too. The device comes with new fast charging tech that can fully charge it in 45 minutes, which is perfect for those that prefer to use their device for sleep-tracking and only charge when they’re showering, for example.

We’ll keep this article updated with new information about the Apple Watch Series 7 as we get it.

The post Apple Watch Series 7: All there is to know about Apple’s latest watch appeared first on BGR .

You shouldn’t hold yourself back from taking advantage of 4K TV deals, as there’s nothing like watching your favorite shows on your home theater setup to unwind after a long day. It’s recommended to get the largest screen that your budget allows, but with Best Buy TV deals, which includes 70-inch TV deals, you might be surprised that you can afford a massive display. For example, Best Buy is selling the Hisense 70A6G at $270 off, bringing the price of the 70-inch 4K TV down to just $580 from its original price of $850.
ELECTRONICS・19 DAYS AGO
Digital Trends

Taking advantage of 70-inch TV deals is no longer beyond your reach, as retailers like Best Buy are pushing the limits of how low their prices can go for these massive displays. There are 4K TV deals for screens of all sizes, but Best Buy TV deals is offering you a chance to purchase the 70-inch Hisense 70A6G for just $580, after a $270 discount to its original price of $850.
ELECTRONICS・18 DAYS AGO
Digital Trends

Upgrading your home theater setup won’t cost you your entire savings if you take advantage of 4K TV deals, with QLED TV deals now also more affordable. If you don’t know where to start, it’s highly recommended that your browse Vizio TV deals, with the brand offering 50-inch TV deals like this $100 discount for this 50-inch QLED 4K TV that brings its price down to just $650 from its original price of $750.
ELECTRONICS・16 DAYS AGO
9to5Mac

We’ve only just got our hands on the new Apple Watch Series 7, and we happen to have the new green model. Much has been made about what the new watch colors actually look like in person, especially the green, since it’s the one Apple is choosing to market most prominently. Now that we’ve seen it, we can confidently say it’s one of the best aluminum finishes Apple has ever shipped.
ELECTRONICS・1 DAY AGO

Apple to iPhone Users: Be Careful Doing This With Your Devices

Americans are anxiously waiting for the official launch of the iPhone 13, which is supposedly being unveiled today, Tuesday, September 14, according to FOX Business News. The event will be streamed live on apple.com from the company headquarters in Cupertino, California at 10:00 AM PDT. The event is being called 'California Streaming", and Apple executives will introduce the iPhone 13 Pro, and "discuss the latest model's new features that will distinguish it from previous iPhones."
CELL PHONES・29 DAYS AGO
Times-News

We used to download apps, enable permissions, and share data without giving it a second thought. These days, most people want more control over their info. That starts with protecting yourself from endless data breaches, leaks, and hacks. When was the last time you checked to make sure your info isn't floating around the web for anyone to find? Tap or click to check your email address against a database of major hacks.
CELL PHONES・21 DAYS AGO
CNET

This story is part of Apple Event, our full coverage of the latest news from Apple. Apple's iPhone 13 line is now available for preorder, and the most exciting thing is clearly the trade-in offers. While this year's phone is more of a refinement of last year's iPhone 12 line, those that crave staying on that bleeding edge might essentially get a free iPhone 13 Pro Max by doing a trade-in that includes up to $1,290 toward the phone.
CELL PHONES・29 DAYS AGO
The Verge

How to find your lost iPhone — even if it’s off

Apple’s Find My app has been a very useful (and reassuring) feature, allowing you to locate a misplaced (or stolen) phone so that you can retrieve it (or contact the authorities, if that’s safer). With the expansion of Find My to a variety of other objects, especially via Apple’s AirTags, it’s become even more useful. And now that iOS 15 brings with it the capability to locate your phone even if the battery has run out or it’s been turned off, the utility of Find My has become even greater.
CELL PHONES・18 DAYS AGO

For shoppers who have been waiting for discounts before they buy a new TV, here’s your chance at 4K TV deals from a Best Buy flash sale. Take your pick from 50-inch TV deals, 70-inch TV deals, 75-inch TV deals, and more — there’s surely a perfect deal for you from Best Buy, if you’re patient enough to look through all the offers.
ELECTRONICS・22 DAYS AGO
Digital Trends

Amazon, a reliable source for discounts on all kinds of devices, appears to be holding a secret tech sale today because of the variety of offers that are currently available. If you look at the retailer’s website, you’ll find all sorts of smartphone deals, tablet deals such as iPad deals, and laptop deals, among many other deals that you wouldn’t want to miss.
ELECTRONICS・29 DAYS AGO
pocketnow.com

Here’s how much iPhone 13 Pro costs Apple to manufacture

Apple unveiled its iPhone 13 series last month. The smartphone series, though looks the same, features better cameras, display, and battery life than the iPhone 12 series. iFixit’s teardown revealed the story behind the iPhone 13’s smaller notch and now, a report has come out that shows how much individual parts of the iPhone 13 series cost.
CELL PHONES・12 DAYS AGO
Tom's Guide

Leading up to the iPhone 13 unveil event earlier this week, survey data showed that 44% of iPhone owners were planning on upgrading. And according to Counterpoint Research, the iPhone 13 line will account for 33% of all 5G shipments this holiday season. Anticipating high demand, I knew I had to get an iPhone 13 pre-order in fast.
CELL PHONES・29 DAYS AGO

Apple has been on the roll lately with the all-new iPhone 13 and iPad 9th gen releases. Now, the tech company is releasing yet another product – the Apple Watch Series 7, with availability and pricing announced. The much-awaited Series 7 orders start from 8 October, with availability beginning 15...
ELECTRONICS・13 DAYS AGO
Jano le Roux

iOS 15 settings you need to turn off now

If privacy matters to you, you'll want to make sure you're not being tracked, listened to, or geotagged wherever you go. It can also be a battery drainer. Apple’s iOS 15 has been released. The newest version of the mobile operating system, as well as its iPad counterpart, iOS 15.5, is now available worldwide. After unveiling the iPhone 13 at its annual hardware presentation last week, Apple made the download accessible.
18 DAYS AGO
MacRumors Forums

Users considering purchasing the iPhone 13 Pro or ‌iPhone 13 Pro‌ Max with the base level 128GB of storage should be aware that it misses out on functionality that comes with higher storage configurations. One of the main new features to come to the iPhone 13 and ‌iPhone 13 Pro‌...
CELL PHONES・9 DAYS AGO
abc10.com

ST. PETERSBURG, Fla. — iPhone users may be seeing a new message pop up after updating their phones to the new iOS 15. According to Apple Insider, regardless of storage used, some early upgraders have been seeing an "iPhone storage almost full" message that can't be dismissed. The bug is...
CELL PHONES・24 DAYS AGO
TechRadar

Save $200 - You can grab this massive 75-inch 4K smart TV on sale for only $599.99 at Best Buy. That's the lowest price we've seen and an incredible deal for a big-screen 4K TV. The Westinghouse set comes with HDR10, Dolby Audio, and a massive range of channels thanks to the Roku operating system.
ELECTRONICS・23 DAYS AGO
ZDNet

Don't waste your money on these Apple products: October 2021 edition

Apple's been busy updating its hardware lineup over the past few months, but don't let the new iPhone and Apple Watch fool you -- there's still plenty of products that you should avoid. And some are high-ticket items, so if you can hold off making a purchase until they are...
ELECTRONICS・5 DAYS AGO
Digital Trends

This year’s Black Friday deals are fast approaching but don’t tell that to Amazon, as there are some Amazon Black Friday deals that are already available for you to shop across different product categories. If you’re planning on buying something on Black Friday, you might want to check out if the item is already discounted on Amazon.
SHOPPING・3 DAYS AGO
IndieWire

All products and services featured by IndieWire are independently selected by IndieWire editors. However, IndieWire may receive a commission on orders placed through its retail links, and the retailer may receive certain auditable data for accounting purposes. You don’t have to wait until Black Friday to find great deals on gadgets that will turn your house into a smart home. Like a lot of retailers, Amazon has been rolling back prices for early bird shoppers who want to stock up on must-haves before the holiday season kicks into gear. To help you get started, we gathered up some of the best Amazon...
ELECTRONICS・2 DAYS AGO