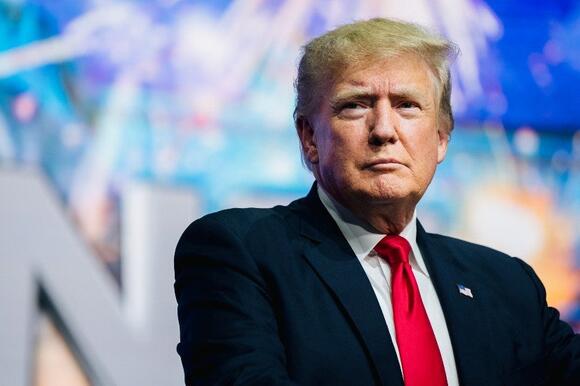 Former President Trump pressured top officials in the Department of Justice (DOJ) to call the 2020 presidential election results corrupt, according to documents released by the House Oversight and Reform Committee.

The documents are notes from former acting Attorney General Jeffrey Rosen’s deputy, Richard Donoghue, that were allegedly taken during a call between Trump, Rosen and Donoghue on Dec. 27.

Donoghue wrote that he told Trump during the call that the Justice Department could not change the outcome of the election, with Trump allegedly replying he understood that.

“Just say that the election was corrupt + leave the rest to me” and other allies in Congress, Donoghue wrote that Trump said in his summary of the notes for the call.

Other members of Congress mentioned during the call were Republican Reps. Jim Jordon (Ohio) and Scott Perry (Pa.), according to The New York Times.

Republican Sen. Ron Johnson (Wis.) was also mentioned during the call, according to the notes seen by the Times. However, the lawmakers weren’t named as the allies Trump expected to help him in an effort to overturn the election results.

Trump has yet to accept his loss to President Biden in the 2020 presidential election and still claims there was widespread voter fraud, despite presenting no evidence.

Donoghue reportedly told Trump during the call that the DOJ had conducted “dozens of investigations, hundreds of interviews” and no widespread voter fraud was found.

Trump still allegedly asserted in the call that the elections in Georgia, Nevada, Michigan and Arizona were “corrupted.”

Trump then reportedly said no one trusted the FBI and the DOJ’s “inactions” had made people “angry," according to the notes.

“You guys may not be following the internet the way I do,” Trump said, according to the notes of the call. “People want me to replace DOJ leadership.”

Donoghue's notes said he told Trump he could replace leadership but it “won’t change the dept’s position.”

“We are not in a position based on the evidence. We can only act on the actual evidence developed,” Rosen and Donoghue said during the call, according to the notes.

The documents were released after Biden told the DOJ they could give unrestricted testimony to congressional investigators who are looking into Trump’s efforts to overturn the election, the Times noted.

The Hill has reached out to Trump’s spokesperson and the DOJ for comment.

The office of Chairman of the Joint Chiefs of Staff Gen. Mark Milley defended him Wednesday after former President Donald Trump accused Milley of "treason" for calling a Chinese military official last year, as reported in a new book. Separately, President Joe Biden said he has "great confidence" in Milley...
POTUS・1 DAY AGO
Crain's Chicago Business

Election officials now on radar of deep-pocketed donors, thanks to Trump

(Bloomberg) — The once-obscure state-level job of overseeing elections has emerged as a prime target for wealthy donors and national organizers from both parties seeking an edge in the 2022 midterms that could shift control of Congress away from Democrats. Republicans are backing secretary of state contenders who echo Donald...
PRESIDENTIAL ELECTION・1 DAY AGO
WashingtonExaminer

Former President Trump is already claiming that the election is rigged. He said millions of mail-in ballots will make this a giant election scam. Candidate Larry Elder is asking supporters to use an online forum to report fraud. He also refused to say whether he would accept the results of the election.
PRESIDENTIAL ELECTION・3 DAYS AGO

As the DA of Georgia’s Fulton County turns up the heat in her investigation into what could be a criminal attempt by Donald Trump to overturn the 2020 election, investigators in the Georgia case are coordinating with federal lawmakers probing the January 6th insurrection at the Capitol. This comes as GOP leader Kevin McCarthy attempts to interfere in the congressional probe and prevent the January 6th committee from accessing the phone records of GOP lawmakers.Sept. 7, 2021.
U.S. POLITICS・9 DAYS AGO
MSNBC

Rachel Maddow shares details of a special report from Reuters documenting threats to election officials at all levels as well as their families with almost no arrests or help from law enforcement.Sept. 9, 2021.
POTUS・8 DAYS AGO
Newsweek

"I believe we can find a better way forward an elect a new kind of Republican president in 2024," Lt. Gov. Geoff Duncan wrote.
GEORGIA STATE・13 DAYS AGO
Newsweek

What's the Punishment for Treason? Trump Calls for General Milley to Be Charged With Crime

The former president called for the Joint Chiefs chairman to be charged with treason if a new book's account of an incident involving China is true.
POTUS・1 DAY AGO

MADISON, Wis. (AP) — A Republican attorney who worked in former President Donald Trump’s administration and who falsely claimed the 2020 election was stolen in Wisconsin appears to have been hired to help with the taxpayer-funded investigation into how the election was run. Andrew Kloster was listed as the author...
WISCONSIN STATE・11 HOURS AGO
NBC News

WASHINGTON — The special counsel appointed by President Donald Trump’s Justice Department to probe the Russia investigation is moving to indict a prominent lawyer on a charge of making a false statement to the FBI, a source directly familiar with the matter told NBC News. The source said the case...
POTUS・19 HOURS AGO
New York Post

Ivanka Trump repeatedly implored her father, then-President Donald Trump, to disavow his claims that voter fraud cost him the 2020 election as he watched news coverage of the deadly Jan. 6 riot at the US Capitol, according to a forthcoming book. Washington Post associate editor Bob Woodward and reporter Robert...
PRESIDENTIAL ELECTION・1 DAY AGO
POLITICO

CALIFORNIA SPLIT — Remember this moment, because it might be a point of no return. The aftermath of today’s California recall vote appears likely to herald the arrival of a new stage of election trutherism, in which large numbers of voters — and candidates — insist ordinary elections are rife with fraud and refuse to acknowledge the legitimacy of the outcome.
CALIFORNIA STATE・2 DAYS AGO

Lawrence O’Donnell explains Donald Trump’s history of lying about 9/11 and why Donald Trump is afraid to repeat his worst lie.Sept. 15, 2021.
POTUS・2 DAYS AGO
Newsweek

Amid the influx of Afghan refugees, former Trump officials are pushing a strict immigration agenda reminiscent of the former administration.
POTUS・1 DAY AGO
MSNBC

Exactly 20 years after the Sept. 11 attack, George W. Bush delivered remarks in Pennsylvania, from the field where Flight 93 crashed. The former president's speech was poignant, and in many ways, important. "[W]e have seen growing evidence that the dangers to our country can come not only across borders,...
POTUS・2 DAYS AGO
Reuters

Former President Donald Trump claimed Wednesday that he was completely in the dark about Gen. Mark Milley, the chairman of the Joint Chiefs of Staff, speaking to his Chinese counterpart in the final months of the Trump administration. “Milley never told me about calls being made to China,” Trump said...
POTUS・1 DAY AGO
Fox News

During the final months of former President Donald Trump's term, Chairman of the Joint Chiefs of Staff Gen. Mark Milley made two phone calls to Chinese officials in fear that Trump would create conflict with the communist nation, a new book has claimed. In the book, authored by Washington Post...
FOREIGN POLICY・2 DAYS AGO
WashingtonExaminer

Former President Donald Trump said Gen. Mark Milley may have committed treason with secret calls to China at the end of his administration.
POTUS・2 DAYS AGO
Newsweek

"The leading Republican running for governor is the closest thing to a Trump clone that I've ever seen in your state," President Joe Biden told California voters on Monday.
PRESIDENTIAL ELECTION・3 DAYS AGO