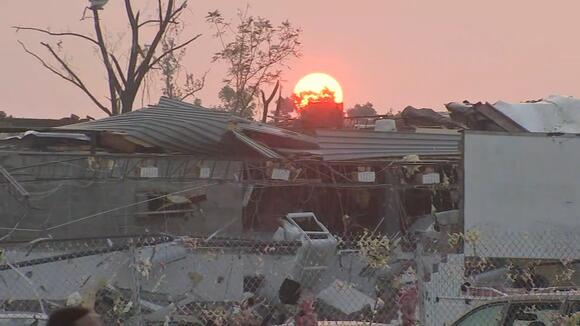 A line of severe weather left behind a path of destruction after at least five tornadoes touched down in the tri-state area Thursday night. A confirmed tornado swept through the Bensalem/Trevose area in Bucks County, leaving six people injured. Two others touched down in Waretown and the Cedar Bridge area of Barnegat Township , New Jersey. Another tornado was confirmed in the Delaware Valley by the debris field on radar from New Hope to Trenton . A possible tornado also came through Weisenberg Township, Lehigh County. Action News Meteorologist Karen Rogers explains, typically, tornadoes in our area are not on the ground long enough to collect enough debris that they can be spotted on radar. However, three such tornadoes occurred on Thursday.

Chopper 6 was over the area Friday morning:

Chopper 6 surveyed the damage left by a tornado in Trevose.

Fred Harran, the director of public safety for the Bensalem Township Police Department, said the tornado touched down along the Old Lincoln Highway corridor near the Neshaminy Mall. A car dealership was right in the storm's path. "We heard this loud bang in the middle of the parking lot and it blew right through the windows. It blew through everything," said Victor Rivera. Rivera was inside the Faulkner Mazda dealership in Trevose on the 4400 block of Street Road when the tornado touched down.

The Action Cam was on the scene after severe weather swept through Feasterville-Trevose, Bucks County.

Cars were seen flipped in parking lots and a roofing structure was torn off the property. "This was a devastating tornado that came through as a lot of structural damage in this area," said Harran. WATCH: Tornado damage across Philadelphia region

The National Weather Service has not yet determined the strength of the twister. "My mom got under the table and I just kind of held her in my arms," Rivera said. "I watched the glass implode and the ceiling kind of caved in from there." The windows of the nearby Volvo dealership were also blown out, and the part of the roof lifted off the Buick building. First responders aided employees and customers on-site while firefighters secured the buildings and PECO crews rushed to turn off the gas. SHARE : Have images and videos of storm damage? You can share it with Action News by clicking HERE . "Just look at a bomb went off, I mean it's gone," said Harran of the damage. Faulkner Automotive Group issued the following statement on Friday: "Our first priority is tending to our employees and our customers to ensure their safety and well-being. While we ensure our Faulkner family is safe, we are taking measures to ensure the immediate safety, security and clean-up efforts of the dealership campus. We would like to thank all of the first responders who have been so helpful. We truly appreciate the outpouring of support and concern from our community. We will overcome this, repair all damage and return to serving our community as quickly as possible." Behind the dealerships, parts of the Penn Valley Mobile Home Park were nearly leveled. The storm uprooted trees and brought down power lines near David Paniagua's family mobile home. "Literally trees were down everywhere. There was skirting down everywhere, it looked like honestly the movie Twister," said Paniagua There are multiple road closures in effect until further notice. The current list includes a complete closure of Street Road from Richlieu Road to Trevose Road; Old Lincoln Highway from Route 1 to Bristol Road; The area of Linconia Park has also been closed to all traffic. The Red Cross has opened a shelter at Neshaminy High School at 2001 Old Lincoln Highway. As of 2 a.m., they report four residents were spending the night at the shelter.

Any additional residents that need a place to stay can come to the shelter at any time. The shelter will also remain open on Friday so residents affected by the tornado can get access to resources and information from the Red Cross. Anyone who needs shelter can call 1-800-RED-CROSS, or call Bensalem Police at (215) 633-3719. The Red Cross had a team of disaster workers gathered at the Neshaminy Mall, working with government partners and affected residents to determine what their needs were after the damaging tornado. SEE ALSO: Bucks County residents hunkered down during storm: 'It sounded like a bomb went off'

The powerful storm blew through Bucks County, Pennsylvania before crossing over to the New Jersey side of the Delaware River.

Thirty minutes north, Matt Maximuck, who owns a 100-acre farm in Buckingham, said the storm sounded like a freight train. "It blew the roof off my barn and as you can see, shattered the glass windows on my greenhouses. It was a mess," said Maximuck. In nearby Plumstead, a giant 50 to 60-foot tree came crashing down in a garage as a frightened homeowner sat nearby. The National Weather Service says crews will be conducting several storm surveys across the region Friday.

A line of severe weather left behind a path of destruction after at least one tornado touched down in the Philadelphia region Thursday night.

Man gunned down in Fairmount Park; 2021 on pace to be Philly's deadliest in decades

A man is dead after an afternoon shooting in Philadelphia's Fairmount Park. The 22-year-old victim was shot twice in the head and multiple times across the body, police said.
PHILADELPHIA, PA・7 HOURS AGO
6abc Action News

The attraction, which opened in November 2015, provided Philadelphia with panoramic bird's-eye views of the city from the 57th floor of One Liberty Place in Center City.
PHILADELPHIA, PA・11 HOURS AGO

Fall is here but challenges persist for Chester County farmers

CHESTER SPRINGS, Pennsylvania (WPVI) -- Bring out the sweaters, the crisp air is here and so is fall. "The colors, the pumpkins and the kids. The families get to get together," said Mauro Suin of Upper Darby, Pennsylvania. "It's a really nice season to be together as a community." "My...
CHESTER COUNTY, PA・1 DAY AGO
6abc Action News

Times have changed, and finding police officers for the future isn't as easy as it used to be.
PHILADELPHIA, PA・18 HOURS AGO
6abc Action News

The motorcyclist was thrown from his bike and pronounced dead at the scene, police say.
PHILADELPHIA, PA・1 DAY AGO

Sources say a group of young women, either in their teens or in their early 20s, started a fight overnight. One of them pulled out a gun and shot a couple in their mid 40s.
MONTGOMERY COUNTY, PA・1 DAY AGO
6abc Action News

Hiram Quintana has competed for years on the competitive BBQ circuit. His skills are now being used to prepare meals for Afghan evacuees finding refuge in Philadelphia.
PHILADELPHIA, PA・20 HOURS AGO
6abc Action News

The trial for a teenager accused of murdering his ex-girlfriend by stabbing her over 30 times begins in Montgomery County, Pennsylvania.
PHILADELPHIA, PA・21 HOURS AGO
6abc Action News

CALN TOWNSHIP, Pennsylvania (WPVI) -- Heavy downpours pounded the Philadelphia region on Thursday leading to some water rescues. A family became trapped in the storm while driving through floodwaters on South Bailey Road and Lincoln Highway around 1 p.m. in Caln Township. Images obtained by Action News show a Pennsylvania...
PENNSYLVANIA STATE・4 DAYS AGO

PHILADELPHIA (WPVI) -- A man was shot outside a hotel in Center City Philadelphia, police say. It happened around 2 a.m. Monday outside the Philadelphia Marriott Downtown on Filbert Street between 12th and 13th. Police say the man was shot twice in his leg and thigh. He was taken to...
PHILADELPHIA, PA・1 DAY AGO
6abc Action News

Philly band on mission to teach music inspired by the Taíno

The band performs at events and visits schools to teach children about that beautiful culture.
PHILADELPHIA, PA・1 DAY AGO
6abc Action News

'I am heartbroken and outraged,' says Philadelphia mayor after city tops 400 homicides

Sunday Mass from the Archdiocese of Philadelphia

6abc Studios (WPVI) -- 6abc is pleased to share this mass - part of our decades-long partnership with the Archdiocese of Philadelphia. The Celebrant for the Mass is Thomas Nasta, Reverend, Our Lady of Grace. The Lector is Walter Fromm, Jr. Stephanie Iaccarino is the Cantor and Mary Breithaupt is...
PHILADELPHIA, PA・2 DAYS AGO
6abc Action News

Authorities in Delaware County say they have arrested one person and are looking for another in a scam targeting senior citizens.
DELAWARE COUNTY, PA・3 DAYS AGO
6abc Action News

The top environmental regulator in New Jersey said the program needs expansion as part of an effort to mitigate the effects of climate change.
MANVILLE, NJ・4 DAYS AGO
6abc Action News

Philadelphia police say the 29-year-old man was driving his Toyota sedan when a gunman opened fire around 7:30 p.m.
PHILADELPHIA, PA・4 DAYS AGO