Looking back on a life-saving career with Capt. Adam Goldberg 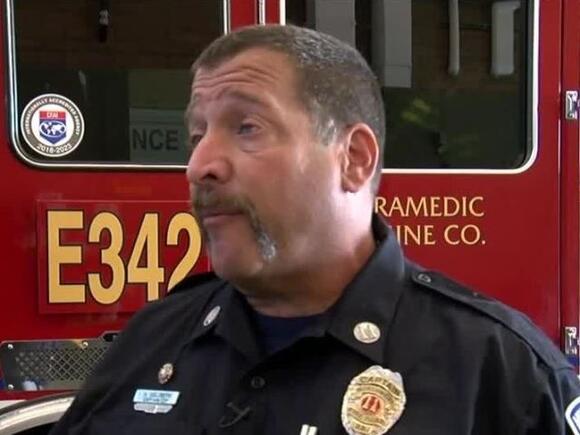 We're all looking for our calling.

"Because this was a passion for me, I remember calls like they were yesterday," Northwest Fire Captain Adam Goldberg said.

Goldberg has been answering calls for help over the last three decades.

"Things came full circle for me after some medical emergencies with my dad and truly as a young kid. I want to do that. I want to be a fireman," said Capt. Goldberg.

Through high school and beyond, his passion of becoming a firefighter grew.

"In March of '86 is when I got hired part-time in the Phoenix area and eventually made it down here to attend the U of A," Capt. Goldberg said.

After that, life brought him to this very spot, Station 30 on Orange Grove Road.

"I became full-time here in the district, which was in 1989 at the very station we're standing at. Except, just an older building behind us," said Capt. Goldberg.

Now, that building is more of a warehouse. In 1995, Goldberg became a captain and has won numerous awards throughout the years but answering the every day calls is what he remembers the most.

Like the time he saw the CPR training he was part of Save a Life.

"The director of that school---her son that was three years old at the time, chocked on a nickel---and one of her staff members was able to dislodge it as we arrived at the scene," Capt. Goldberg remembered.

That little boy's mom became a family friend. From saving lives to responding to horrific incidents, it's all part of the job.

"The Osprey crash where 19 marines were killed. I'll never forget the picture in my head of what that looked like," said Capt. Goldberg.

"I was the public information officer when the Gabby Giffords incident took place at the Safeway at Ina and Oracle. Another event that took me basically away from my home for almost three days straight."

Now, right before his retirement, Capt. Goldberg had to say goodbye to retired fire Chief Jeff Piechura. One of the people killed in a plane crash earlier this month and someone he worked with for 24 years.

"It makes me think that now my timing was really good because the world is changing, and first responders are not in the position where they used to be respected and safe."

The love for the job, that's what Capt. Goldberg says has kept him coming back

"You have to be able to put these memories and the bad calls in a place where you won't forget them but hopefully, they won't affect you negatively," said Capt. Goldberg.

To get through it all, he's relied on his family and coworkers.

"I really rely a lot on my family. You have a picture of them and I titled it my reason for retirement," said Capt. Goldberg.

Just because he's retiring, it doesn't mean he'll be completely done with firefighting. His two sons are following in his footsteps.

"they're young and they're hopefully going to be pretty successful and i get to be a part of the fire service not only as a retiree but as a dad of a firefighter in the future that's going to be pretty cool," said Capt. Goldberg.

Looks like they'll continue his life's work of trying to making a difference.

"I'm hoping people listen to messages. I'm hoping they think a little differently now. I hope they still remember that first responders are there to help," said Capt. Goldberg.

"It's been 24/7 365 for 32 years and Saturday morning at the end of my last shift, the switch will flip and it will be done. It's going to be an uphill battle to get over that."

It's an uphill battle he's ready to take on.

Marine Sgt. Nick Walsh was so in love with his 1991 Ford Bronco that he vowed to pass it down to his own son one day. But those dreams were seemingly shattered. In 2007, Sgt. Walsh was on deployment in Iraq when he was killed by sniper fire. He was only 26. His son, Triston, was just 4 years old at the time.
1 DAY AGO
KGUN 9 Tucson News

A K9 is enjoying retirement after serving five and a half years with the U.S. Border Patrol Tucson Sector.
TUCSON, AZ・6 DAYS AGO