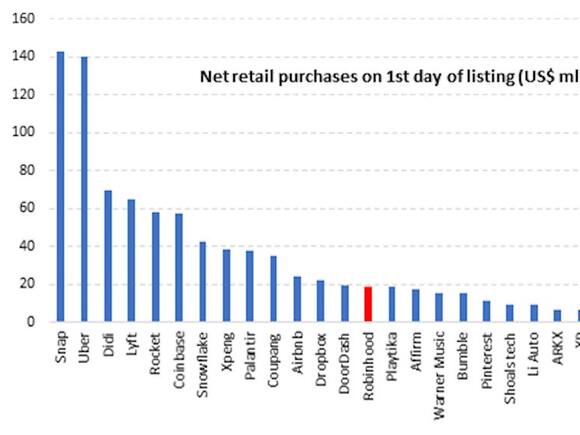 Retail investors bought $18.85 million of Robinhood stock during the trading app's first day in the public market, lower than other major IPO debuts, according to Vanda Research data released Friday.

Retail investors poured more money into this year's launches of crypto exchange Coinbase and Chinese ride-hailing app Didi Global . In April, $57.4 million in Coinbase stock was purchased, and in June, that group picked up $69.8 million in Didi stock, said Vanda, whose VandaTrack arm watches activity in 9,000 individual stocks and ETFs in the US.

The $19.7 million of DoorDash shares purchased in the food delivery company's December 2020 debut was just ahead of retail purchases of Robinhood stock.

Social media app Snap tops the list at $143 million in shares purchased by retail investors, said Vanda. Snap went public in March 2017. Uber was right behind that, at $139.9 million in May 2019 for the ride-hailing app.

Robinhood bucked convention in its IPO by setting aside 35% of its shares for individual investors. The company earlier this year angered many of its customers when it halted buying of GameStop , AMC Entertainment and other meme stocks during a massive rally. Robinhood had pledged to earn back the trust of those customers . The company has more than 18 million accounts and 17.7 million active monthly users.

Among institutional investors, Cathie Wood's ARK Innovation ETF exchange-traded fund bought nearly 1.3 million shares of Robinhood on Thursday, according to a daily trading report from Ark Investment Management . That logs a $45 million stake in Robinhood at the company's closing price.

The dip in Coinbase shares coincided with steep drops in the prices of nearly all major cryptocurrencies.
MARKETS・21 HOURS AGO
MarketWatch

The U.S. initial public offering market is bracing for another busy week with 14 deals on tap, unless fears of contagion from a possible default by Chinese property giant Evergrande lead issuers to postpone plans.
MARKETS・23 HOURS AGO
Markets Insider

Lee argued that increasingly wealthy Millennials will continue to boost stocks to new heights as they collectively inherit $2 trillion per year.
STOCKS・22 HOURS AGO
MarketWatch

Evergrande is the non-COVID and non-inflation event rattling stock markets around the world.
MARKETS・1 DAY AGO

Ark Invest CEO Cathie Wood has been very fond of Tesla and its stock. There are multiple Ark Invest ETFs that contain a significant number of Tesla shares. Tesla holds the most weight out of all other stocks in multiple Ark Invest ETFs including the Ark Innovation ETF (ARKK), the Ark Autonomous Technology & Robotics ETF (ARKQ), and the Ark Next Generation Internet ETF (ARKW).
STOCKS・23 HOURS AGO
MarketWatch

Evergrande crisis and the U.S. debt-ceiling showdown could give stock investors a buying opportunity

Markets are getting the one-two punch they need to hit bottom.
STOCKS・17 HOURS AGO
24/7 Wall St.

The stock market is still overbought, expensive and long due for a breather. There are very few alternatives now for investors who need some growth consistent income. These five stocks supply both and look like outstanding total return ideas, and they all are positioned well for the rest of 2021 and beyond.
STOCKS・1 DAY AGO
The Motley Fool

Consumers are growing more comfortable with transacting on their homes like any other good or service. Technology is speeding up the sales process and saving consumers enormous amounts of money. The real estate market is hot right now with low interest rates driving strong demand and inventory shortages crippling supply....
MARKETS・1 DAY AGO

After its IPO in July, trading platform Robinhood is now said to be planning to load up its app with new features like a cryptocurrency wallet. According to a report by Bloomberg, the company is testing a new function that’ll allow you to store and transfer digital assets such as Bitcoin and Ethereum.
MARKETS・12 HOURS AGO
24/7 Wall St.

One of Cathie Wood's Ark Invest exchange-traded funds sold over $9 million worth of shares of Amazon on September 20.
STOCKS・5 HOURS AGO
beincrypto.com

In this article, BeInCrypto takes a look at on-chain indicators like the Stablecoin Supply Ratio (SSR) and the (USDT) supply on exchanges, in order to determine how much buying power stablecoins currently have over the entire bitcoin (BTC) supply. Furthermore, we analyze the Stock-to-Flow (STF) model to see if it’s...
MARKETS・6 HOURS AGO
Money Morning

Why Brilliant Earth Stock Is a Buy on Robinhood IPO Access

Brilliant Earth Group Inc. goes public this week. The Brilliant Earth IPO will try to raise nearly $267 million on 16.67 million shares and value the company at $1.51 billion. The stock will trade at a range between $14 and $16. Whether Brilliant Earth stock is a buy or not may depend on whether or not it falls within that range.
STOCKS・3 HOURS AGO
MarketWatch

JPMorgan says buy that S&P 500 dip, but you might want to look at this chart first

Markets are rebounding after Monday's selloff, and one big Wall Street bank says it's a green flag to buy.
STOCKS・6 HOURS AGO
Markets Insider

The shared-workspace company expects to list its shares on the New York Stock Exchange under the "WE" ticker symbol.
BUSINESS・7 HOURS AGO
Variety

Shares in Universal Music Group surged by more than a third in the first minutes of trading on Tuesday, following an initial public offering (IPO). Ten minutes into the trading session, shares were changing hands at €25.61 on the Euronext Amsterdam stock exchange. That is a 38% leap compared with the €18.50 figure that the group announced on Monday as its reference price. With the shares at this value, the group has a market capitalization close to $46 billion (€39 billion). No new shares are being created in the share sale and UMG is not raising any fresh cash by listing. Rather...
ECONOMY・10 HOURS AGO
MarketWatch

Shares of Bill.com Holdings Inc. dropped 5.6% in premarket trading Tuesday, after the provider of software aimed at simplifying back-office operations announced the offering of $1 billion worth of common stock to the public and $500 million in convertible debt to qualified institutional investors. The debt, which are senior notes due 2027, can be converted into common stock, cash or a combination of both, at the election of the company. For the common stock offering, which represents about 3.7% of Bill.com's market capitalization of $26.9 billion as of Monday's close, the company plans to use the proceeds for general corporate purposes, which could include potential acquisitions. Bill.com's stock has soared 56.6% over the past three months through Monday, and closed at a record $297.14 on Sept. 3. In comparison, the S&P 500 has gained 3.2% the past three months, and closed at a record on Sept. 2.
STOCKS・5 HOURS AGO
MarketWatch

Should Evergrande fallout and one ugly trading week prompt you to reconsider your investment strategy?

'We're being tested to see if our portfolio allocation is appropriate for our risk tolerance.'
STOCKS・1 HOUR AGO
Business Insider

Some of the US's top investors have placed their bets - and startups that provide back-end tech to other businesses dominated the series.
MARKETS・1 HOUR AGO
Deadline

Stocks retreated sharply Monday in the worst opening in weeks on jitters prompted by a potential crisis in the Chinese real estate sector, fear over Fed policy changes and negotiations over the U.S. debt ceiling in Washington, D.C. There’s also been some recent data raising fears of slower growth in the U.S. and global economy. Stocks fell across the board and the fears created pressure on riskier assets, with AMC Entertainment particularly hard hit — off 5% at the open — and exhibition stocks following. The share price of the nation’s largest theater chain has been inflated by Reddit-fueled buying that’s...
STOCKS・1 DAY AGO
theregister.com

Like a phoenix rising from the smouldering ruins of its data centre, OVH sets sights on IPO

OVH Groupe SAS is edging closer to a potential initial public offering (IPO) expected to value the European hosting and cloud biz at around $4.7bn – months after a fire engulfed part of its data centre real estate. The privately owned company, which trades as OVH Cloud, today issued a...
BUSINESS・1 DAY AGO