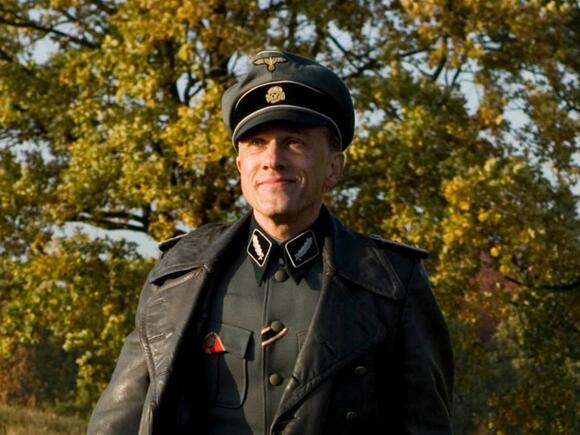 Quentino Tarantino has revealed that Christoph Waltz was banned from rehearsals during production of Inglourious Basterds to help shock his co-stars.

Appearing on Brian Koppelman’s The Moment podcast earlier this week, Tarantino discussed working with Waltz on the film.

“I got together with Christoph before we got to the big script reading with the cast,” he said. “I told him: ‘I’m not doing this to be perverse game-playing… everybody is so curious about who is playing Hans Landa.

The writer-director explained that the only scene he wanted Waltz to rehearse was the opening scene, in which Landa unearths a family of Jewish people hiding at the home of a French farmer.

“With the exception of the French farmer, I don’t want you rehearsing with the other actors before filming,” Tarantino told Waltz. “I don’t want Diane Kruger or Brad Pitt to know your gun-slinging abilities until the cameras are rolling.”

Inglourious Basterds can be watched now on Netflix and Virgin TV Go in the UK.

The number one movie on Netflix's Top 10 Movies in the U.S. chart is surprisingly not a Netflix original. The spot is held by the 2012 thriller Safe House, starring Denzel Washington and Ryan Reynolds. The film also holds the number two slot on Netlfix's overall top 10 charts, just behind the British series Sex Education, which had its third season released on Friday.
MOVIES・9 DAYS AGO
wegotthiscovered.com

The Ben Affleck renaissance has been ongoing for a decade now, and it’s marked an incredible turnaround for an actor that was fighting to remain relevant after a string of critical and commercial duds, while he was much more likely to be found on the front pages of the tabloids than the trades.
MOVIES・19 DAYS AGO
wegotthiscovered.com

It’s hard to deny that Bruce Willis has been in some absolutely phenomenal films — Looper, Pulp Fiction, and Die Hard are certainly proof of that. Still, he’s been in quite a few movies that were critical flops as well. According to stats from FlixPatrol, one of his moves that has a measly 15% Tomatometer rating on Rotten Tomatoes is somehow one of the most popular films on the entirety of Netflix.
TV & VIDEOS・13 DAYS AGO
MovieWeb

We have an exclusive sneak peek at American Badass: A Michael Madsen Retrospective, an all-new documentary celebrating the iconic actor. American Badass takes a look at the fascinating life and impressive career of the actor, producer, writer and poet. Madsen's iconic 40+ year career and more than 170 films include Kill Bill Volumes 1 & 2, Thelma & Louise, Die Another Day, Sin City, Free Willy and perhaps most notably Reservoir Dogs.
MOVIES・12 DAYS AGO

Angelina Jolie has been a bit more in the limelight recently as her divorce to Brad Pitt continues, her new movie Eternals begins to gear up for release and her new book Know Your Rights gains momentum. Oh yeah, and now that she's on Instagram too. The actress recently spoke out about her new book specifically in a recent interview, talking about how she felt assaulted by Harvey Weinstein and said she was “hurt” by Brad Pitt for working with him. Now, we’ve heard from Weinstein and sources close to Pitt on the matter.
CELEBRITIES・20 DAYS AGO
Amomama

How does one get Meryl Streep, Jennifer Lawrence, Leonardo DiCaprio, and Jonah Hill in one room? The trailer for the Netflix original film "Don’t Look Up" has the answer to that very important question. Although most people know Netflix primarily as a streaming platform, the company is proving itself as...
MOVIES・15 DAYS AGO
Variety

Leonardo DiCaprio, Jennifer Lawrence, Meryl Streep, Rob Morgan and Jonah Hill are facing the threat of a comet hitting Earth in a new clip from the Netflix movie “Don’t Look Up.” The clip was shown during Netflix’s Tudum event to showcase its upcoming TV series and movies. The dark sci-fi comedy, directed by Adam McKay, stars Lawrence and DiCaprio as two low-level astronomers who try to warn politicians and others that the Earth is in danger as a giant asteroid approaches, only to be met with apathy and skepticism. (The comparison to reactions to climate change are not a coincidence.) Lawrence plays...
MOVIES・2 DAYS AGO
Variety

At ‘Tarantino Live,’ Director’s Soundtracks Come to Life, With a Little Help From Jackie Brown, the Bride and the Gimp

What do the Bride, Jackie Brown, Django, Mia Wallace, Hans Landa, Cottonmouth, Stuntman Mike McKay, Mr. Pink, Charles Manson and the Gimp all have in common? For one thing, that they’re all characters in a stage musical now playing at the Bourbon Room in Hollywood. But its creators would rather that you not call “Tarantino Live” a musical per se, or at least not boil it down strictly to that term. For one thing, its “book” — largely an amalgam of dialogue from Quentin Tarantino’s movies — is a sort of loose fantasia tying characters and themes from the films together...
MOVIES・2 DAYS AGO

When it was announced that Quentin Tarantino was developing an R-rated Star Trek film with The Revenant screenwriter Mark L. Smith, fans were curiously excited. What would that even look like!? Some fans even questioned the ethics of making an R-rated Star Trek movie. Even Gene Roddenberry’s son Rod is having a hard time grasping the concept, it’s something he’s been struggling with, but he’s also trying to keep an open mind.
MOVIES・13 DAYS AGO
TVOvermind

In 1992, Quentin Tarantino exploded onto the movie scene with his directorial debut, Reservoir Dogs; Starring Harvey Keitel, Tim Roth, Michael Madsen, and Steve Buscemi. The film follows a group of thieves who plan on pulling off the perfect heist; however, the bank robbery doesn’t go off as planned and suspicions arise about one of the men being a police informer. The independent film jump-started Tarantino’s career as a serious writer/director and is considered to be one of the greatest films of all time by many.
MOVIES・15 DAYS AGO
Collider

Quentin Tarantino is working hard to sell the novelization of his hit movie Once Upon a Time in Hollywood, including a new hardcover version with some extra goodies for fans. Entertainment Weekly exclusively revealed the official art for the hardcover edition, which will be available for sale later this November from HarperCollins.
MOVIES・14 DAYS AGO
NME

Edgar Wright has said that Quentin Tarantino is to thank for the title of his new film Last Night in Soho. Wright explained to Total Film that the Pulp Fiction filmmaker – also his longtime friend – inspired him when discussing a song by Dave Dee, Dozy, Beaky, Mick & Tich.
MOVIES・12 DAYS AGO

Inside Christopher Nolan’s Move to Universal, the Only Studio That Made Sense for His Atom Bomb Movie

Imagine an atom bomb exploding high in the clouds, in IMAX. Well, now moviegoers will get to see that image in the new $100-million movie from A-list auteur Christopher Nolan. At the close of finalizing a deal late Monday night, Universal greenlit Nolan’s script about how physicist J. Robert Oppenheimer and the Manhattan Project invented the atom bombs that ended World War II in August 1945. Filming should begin, with or without rumored Nolan regular Cillian Murphy (who bears a certain resemblance to Oppenheimer), in early 2022. Universal beat out several major studios to back the project after Nolan chose to...
MOVIES・13 DAYS AGO
Inside the Magic

Quentin Tarantino is one of the most respected and recognizable directors of the 20th and 21st century, having earned widespread fame for groundbreaking films like Pulp Fiction (1994). Known for his insane violence and snappy dialogue, Tarantino is a cinema-lover at heart. When it came time to release The Hateful Eight (2015) in a special 70mm format, Star Wars and Disney had something interesting to say.
MOVIES・12 DAYS AGO
GamesRadar+

Details of Once Upon a Time in Hollywood’s upcoming hardback release have been revealed – including an original script from director Quentin Tarantino. While the novelization is already out, the new version will include a handful of pieces of ancillary materials that might make Tarantino diehards go for a double-dip.
TV & VIDEOS・13 DAYS AGO
Collider

Hollywood is a living beast that is constantly course-correcting its path towards the next blockbuster. In its wild run for the next cultural gold mine, projects change hands, producers abandon scripts, and even directors get relocated from one film to another. While this process is normal, sometimes we can wonder what would have happened if some curious productions had seen the light of day. And while What If..? makes us ponder the question of how different the Marvel Cinematic Universe could look, we are also left to wonder how superhero history could be completely different if a few Marvel productions had left the paper.
MOVIES・9 DAYS AGO
ComicBook

One of Nicolas Cage's Best Movies Is Now on Hulu

Raising Arizona, the 1987 comedy from Joel and Ethan Coen, is now on Hulu. The film, which ranks 31st on the American Film Institute's "100 Years...100 Laughs" list and 45th on Bravo's "100 Funniest Movies" list, stars Nicolas Cage in one of his most acclaimed performances. He starred in the film alongside Holly Hunter (Batman v Superman: Dawn of Justice), John Goodman (The Big Lebowski), and Frances McDormand (Fargo) in the crime comedy, which sees Cage playing H.I. "Hi" McDunnough, an ex-convict who met his wife when she was working as a police officer and took his mugshot after his arrest.
MOVIES・26 DAYS AGO