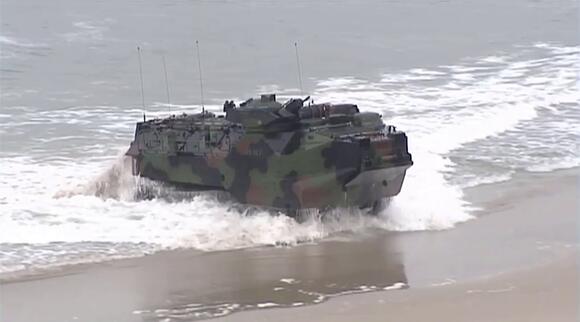 The families of nine fallen military members are now suing the maker of an assault vehicle and calling on the military to stop using them.

It’s in response to an incident that happened nearly one year ago.

The lawsuit is being filed against BAE Systems.

Eight marines and a navy sailor died when the land-and-sea assault vehicle started taking in water off the coast of California.

The lawsuit claims the vehicles have defective doors turning them into death traps.

Family members who lost their love ones hope their lawsuit will force action so nobody else has to go through what they did.

Police Investigate Assault on Man in Military Fatigues in Berlin

Update: Berlin Police said they have been in contact with a woman accused of assaulting a Navy sailor at a pizza restaurant on the night of Saturday, Sept. 11. Police are looking for a woman who is suspected of assaulting a customer who was in military fatigues at a pizza restaurant in Berlin on the night of Saturday, Sept. 11.
BERLIN, MA・5 DAYS AGO
WDAM-TV

HATTIESBURG, Miss. (WDAM) - A man was killed Saturday in an one-vehicle accident Saturday afternoon at the intersection of U.S. 49 south and Campbell Loop in Hattiesburg. Hattiesburg police spokesman Ryan Moore said officers responded to a call of an accident just before 2 p.m. When officers arrived on scene,...
HATTIESBURG, MS・1 DAY AGO
peakofohio.com

A Champaign County man was killed in a three-vehicle accident near the Marathon gas station in Mechanicsburg Thursday evening around 6:30. The Springfield Post of the Ohio State Highway Patrol reports that Jeffrey Burnette, 57, of Huber Heights, was driving a Ford Ranger northbound on State Route 4, entering Mechanicsburg, when he lost control and traveled over the railroad tracks.
CHAMPAIGN COUNTY, OH・2 DAYS AGO
informnny.com

FORT DRUM, N.Y. (WWTI) — Fort Drum released a statement on Sunday after three 10th Mountain Division Soldiers have died in isolated and unconnected suspected self-harm incidents over the past three days. Additional information about the incidents is not being released until next of kin are notified and the investigation...
FORT DRUM, NY・9 HOURS AGO

GREENSBURG, Pa. — Family members of a Greensburg attorney who was found dead in a YMCA sauna after being trapped overnight are suing. According to our partners at TribLive.com, the wrongful death lawsuit was filed in Westmoreland County Court by Colleen Robinson and her sons. It claims her husband, 80-year-old David Robinson, went into the sauna at the Greensburg YMCA the night of March 14. It said he wasn’t discovered until the next morning. Temperatures can reach 112 degrees inside the sauna. The suit claims there was no way to open the door from the inside.
GREENSBURG, PA・11 DAYS AGO
Your Radio Place

COSHOCTON, Ohio – A Coshocton woman was cited by authorities, after a traffic accident on Wednesday afternoon. According to the Coshocton County Sheriff’s Office, a 911 call was received around 3:45 pm in regards to a two-vehicle accident at the intersection of South 6th St and Pine Street. Upon arrival...
COSHOCTON, OH・3 DAYS AGO
987thecoast.com

ONE DEAD IN VINELAND FROM MOTOR VEHICLE ACCIDENT

One person is dead as a result of a motor vehicle accident in Vineland. Vineland Police say the accident took place early Saturday morning on West Walnut Road. The driver veered off the roadway and struck a tree. There’s been no identity of the person who was killed.
VINELAND, NJ・13 DAYS AGO
Nationwide Report

Woman dead after a three-vehicle accident in Madison (Nashville, TN)

Woman dead after a three-vehicle accident in Madison (Nashville, TN)Nationwide Report. On Wednesday night, a woman lost her life and two others suffered injuries following a three-vehicle wreck in Madison.
NASHVILLE, TN・3 DAYS AGO

A three vehicle accident occurred at approx 2:30 pm. Sunday Sept 5, in the area of 880N and IL Highway 78 (just north of Kewanee). A southbound passenger car crossed the centerline, striking a motorcycle, then struck an SUV (both traveling northbound). The driver and the passenger of the motorcycle were pronounced deceased on scene. Occupants from the other two vehicles were taken to hospital. The accident remains under investigation. Identities are being withheld, pending notification of families.
KEWANEE, IL・13 DAYS AGO
1470 WMBD

MORTON, Ill. — Emergency crews found at least one vehicle engulfed in flames on Queenwood Road in Morton Wednesday night due to an accident that is now being described as fatal. The Tazewell County Sheriff’s Department had the road blocked off for at least a mile, from Tennessee Avenue to...
MORTON, IL・3 DAYS AGO
wkdzradio.com

A Hopkinsville woman reported her vehicle damaged after a physical altercation on Glenview Drive in Hopkinsville Tuesday afternoon. Hopkinsville Police say the woman’s boyfriend assaulted her causing minor injuries then damaged her car. The damage to the car is believed to be around $1,000. No arrest has been made but...
HOPKINSVILLE, KY・11 DAYS AGO
sandiegouniontribune.com

Column: We can do more to address military training accidents; let’s follow the lead of military families

If there is one thing most Americans agree on it’s the idea of supporting our troops, or, at least, we like to think of ourselves as a nation that supports our troops. People may not agree with a war our country is waging; they may have issues with military structure and leadership, or disagree with certain policies and procedures, but when it comes to our rank-and-file servicemembers, most people show a degree of solidarity and support.
SAN DIEGO, CA・2 DAYS AGO

A La Farge man was killed Friday in a single-vehicle crash. At approximately 8:21 p.m. Sept. 10, the Vernon County Sheriff’s Office was dispatched to a rollover accident that took place at the intersection of Morning Star Road and Twin Valley Road in the township of Union. Upon arrival it was discovered the two occupants, James M. Hall, 50, of La Farge, and Dylan B. Miller, 27, of West Salem, had been ejected from their vehicle. Seatbelts had not been worn, and the driver wasn’t identified in the press release.
LA FARGE, WI・8 DAYS AGO
cbslocal.com

Fiancé of Gabby Petito breaks silence on her mysterious disappearance

An attorney for Brian Laundrie, Gabby Petito's fiancé, said it was "an extremely difficult time for both the Petito family and the Laundrie family."
PUBLIC SAFETY・5 DAYS AGO
Insider

"Brian, how could you do this to Gabby? You selfishly remain silent while Gabby is all alone in the wilderness," Petito's family said in a statement.
RELATIONSHIPS・4 DAYS AGO
TheDailyBeast

‘I Had Goosebumps’: Woman Finds Video of Missing Couple’s Van

A family traveling the country on their bus has posted video of what appears to be missing van-life couple Gabby Petito and Brian Laundrie’s vehicle in Grand Teton National Park on Aug. 27. Jenn Bethune, who blogs about her clan’s adventures, told The Daily Beast that the white Ford van...
PUBLIC SAFETY・11 HOURS AGO
Popculture

Pori Moni, a popular Bangladeshi movie star and model, was arrested during a drug raid earlier this month. Mori, 28, later claimed she was framed. After three rounds of questioning with the police, she was ordered to go back to jail on Saturday. Back on Aug. 4, members of the...
WORLD・28 DAYS AGO
Daily Fort Worth

Some people simply can’t control themselves and are risking decades in prison for their reckless actions and this man is just that kind of person because he is about to spend major part of his life in prison after he shot to death one person and injured another because they were Joe Biden supporters.
U.S. POLITICS・5 DAYS AGO
iHeartRadio

After assaulting the boy, the suspect took his bag and walked off the bus.
LOS ANGELES, CA・10 DAYS AGO