Former Olympians react to Biles having the decision to withdraw 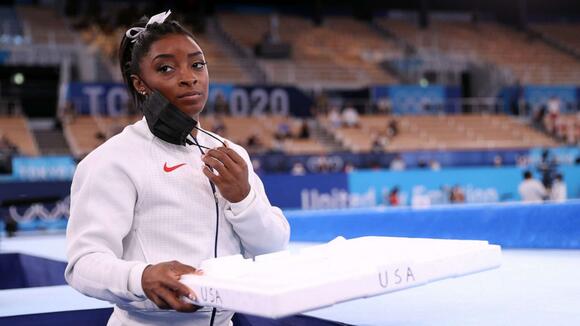 As Simone Biles' decision to withdraw from competition at the Olympics sent shockwaves around the world, one facet in particular stood out to former Olympic gymnasts: that she had the power to make that decision for herself.

"I never remember feeling like I ever got to make those decisions, even if I had wanted to," 2012 U.S. Olympian Jordyn Wieber told ABC News.

When she was growing up in elite gymnastics and going through the USA Gymnastics system, Wieber said, it was a culture where "the gymnasts don't have the voice, it's up to the coaches. And I sometimes describe it as we're just kind of like robots that do what we're told."

MORE: How USA Gymnastics has changed since the Larry Nassar scandal

Biles' ability to make her own decision to withdraw is representative to many of a culture that is slowly but surely changing, especially after the reckoning the sport has faced for abusive practices in the five years since the last Olympics.

This is the first Olympics since USA Gymnastics was torn up over the public revelation of team doctor Larry Nassar's sexual abuse of scores of young athletes -- and questions remain over who knew what in the organization, and when. Since then, a handful of gymnastics coaches have been dropped, suspended and charged with various types of abuse.

Also since then, after gymnasts' pressure, USAG closed the infamous Karolyi ranch , a training facility where many gymnasts say they were abused by Nassar. This is the first Olympics in three decades without the influence of Bela or Martha Karolyi , who arguably developed the U.S. program to its recent dominance but did it with a fierce strictness many gymnasts have condemned. They have also been involved in lawsuits alleging their complicity in Nassar's abuse. They have always maintained their innocence.

"(Biles') decision demonstrates that we have a say in our own health—'a say' I NEVER felt I had as an Olympian," 1996 U.S. Olympian Dominique Moceanu tweeted Wednesday morning, recounting how at 14 she competed in the Olympic floor final minutes after falling on her head on beam.

Dominique Dawes told "Good Morning America" she had actually quit during the 2000 Olympic trials, saying, "I was done after prelims because it was too much on me emotionally. However, I was not able to make that decision. It was very much a controlled atmosphere."

Dawes went on to compete in the 2000 Olympics, her third.

Rachael Denhollander , a former gymnast and the first to publicly accuse Nassar of abuse, wrote in a series of tweets that Biles' decision was an example of "the change we've worked so hard for" after " gymnasts were raised in a system that not only didn't care about the damage to their bodies and minds but that twisted reality for them."

"Hopefully," Wieber said, "we're shifting away from the culture of prioritizing medals and money and the success of the athletes over the health of the athlete," which is something she's been working on herself as head coach for the University of Arkansas. She said she sees Biles as a "pioneer" and that makes her "really proud."

Moceanu, who won gold as part of the U.S. team in Atlanta, told ABC News in a written comment that Biles was "finding new ways to be heroic," saying she was "actually very proud of Simone."

"What she did was actually very brave and is a positive sign for the future of the sport," Moceanu wrote.

Biles has said she remained in the sport in part to be a leader and continue to push to change the culture.

Nastia Liukin, who won gold in the individual all-around for the U.S. at the 2008 Olympics, wrote on Instagram about Biles, "Thank you for creating a safer space for current and future athletes to unequivocally be themselves."

"I think gymnastics has had no choice over the past couple of years than to change," said Wieber, who won team Olympic gold in 2012. "And a lot of coaches are being pushed to look at, you know, what their own coaching style is and look at how it is affecting their athletes long term and make some adjustments."

But there's still a ways to go both culturally and in examining what USAG did or didn't do about abuse by Nassar and others, added Wieber, who was abused by Nassar and coached by John Geddert, who killed himself earlier this year after being charged with human trafficking and sexual assault.

Noting that no one knows what Biles, who was also abused by Nassar, is going through at the Olympics but herself, Wieber said of competing for USAG, "I can take some guesses and imagine that it's probably difficult to represent an organization like USA Gymnastics for her, an organization that has failed her so many times and failed a lot of us."

She continued, "I'm just making assumptions here, but I can imagine that it, it adds to the weight of what she carries with her every day of having to represent that organization."

Four-time Olympic medalist and member of the International and U.S. Gymnastics Hall of Fame, Dominique Dawes, joins News NOW to discuss how the culture of gymnastics may have contributed to the 18 years of abuse by the long-time Team U.S.A. doctor, Larry Nassar. Sept. 15, 2021.
GYMNASTICS・4 DAYS AGO
Fox News

Simone Biles details how Nassar's abuse impacted Tokyo Olympics: 'I never should have been left alone'

Simon Biles revealed Wednesday that the sexual abuse she was subjected to by disgraced former USA Gymnastics team doctor Larry Nassar had a direct impact on her mental health at the 2020 Tokyo Olympic Games, from where she unexpectedly withdrew from several events. Biles and several other members of Team...
SPORTS・4 DAYS AGO
Amomama

Famous American Olympian Simone Biles was with her ex-boyfriend Stacey Ervin for over two years. Here's everything you need to know about the hunky elite athlete. Simone Biles used to proudly share photos of herself with ex-boyfriend Stacey Ervin on Instagram before deleting them all after their breakup. The Olympic gold medalist has since moved on with her life, recently celebrating her first-year anniversary with fellow athlete Jonathan Owens.
NFL・17 DAYS AGO
Insider

Simone Biles opened up about the injury on Instagram, saying she immediately felt the rib "crack" but continued to perform anyway.
CELEBRITIES・16 DAYS AGO

Suni Lee's father, John, was partially paralyzed in 2019 after falling off a ladder. He's used a mechanical wheelchair to get around ever since.
CELEBRITIES・12 DAYS AGO
ValueWalk

I want to start this discussion by saying I have no idea what really happened at the Olympics. Most of us probably don’t know what was said or done and fewer will ever know what was happening for the human beings who were part of the decisions, actions and events around Simone Biles’ withdrawal from the women’s gymnastics all-around final competition.
SPORTS・9 DAYS AGO
E! News

As if we didn't already feel wildly inferior to the athletic prowess of our favorite Olympians, they're also continuing to prove their fashion mettle as well. During the 2021 Met Gala, which took place on Monday, Sept. 13, a number of Olympic athletes—some who competed during the 2020 Tokyo Games, and others who participated in years' past—looked right at home on the red carpet.
CELEBRITIES・6 DAYS AGO
Sporting News

Simone Biles and three former teammates on the U.S. national gymnastics team said during Senate testimony Wednesday that the FBI not only mishandled the investigation of the Larry Nassar sexual abuse case, but protected USA Gymnastics and the United States Olympic and Paralmypic Committee. The testimony from the gymnasts —...
INDIANAPOLIS, IN・4 DAYS AGO

American gymnast Simone Biles made headlines earlier this year when she bravely decided to withdraw from several events in the Tokyo 2020 Games in order to focus on her mental health. Now, the legendary, seven-time Olympic medalist is prioritizing another aspect of life that’s important to her—friendship. She recently pulled off an incredibly thoughtful gesture for her friend and teammate, Suni Lee, when she gifted Lee’s dad with a custom electric wheelchair.
CELEBRITIES・10 DAYS AGO
GOBankingRates

In America, soccer is one of the rare sports where the biggest stars in the game are women. It's also one of the only sports where women are paid more than men — at least by the national team if...
MLS・1 DAY AGO
CBS Sports

As the United States women's national team has continued to be one of the top women's soccer programs in the world, just as public and well-documented as their on-field triumphs has been their fight to be paid at a level equal to that of their male counterparts. Such public jousting...
MLS・3 DAYS AGO
WHIO Dayton

Alex Morgan says the U.S. women's national team needs to make sure players aren't losing any of their existing compensation under the identical contract proposals the U.S. Soccer Federation has made to both the men's and women's teams. But the team is hopeful for a new collective bargaining agreement that...
MLS・4 DAYS AGO

'It's great and it's time:' Lisa Byington takes a big step forward for women in sports broadcasting

Women's role in sports has been growing for years, a new milestone was reached this week when Lisa Byington was named Bucks play-by-play announcer.
TENNIS・1 DAY AGO