Bucks County residents hunkered down during storm: 'It sounded like a bomb went off' 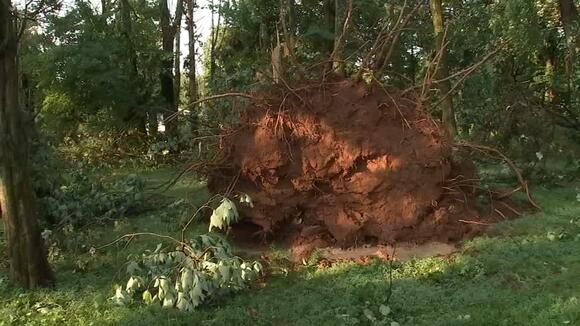 A tornado moved through Bucks County, Pennsylvania into New Jersey Thursday, leaving major damage in its path. This tornado was confirmed by the debris field on radar; it was one of at least four possible locations that saw tornadoes in the afternoon to the evening hours.

Several of the tornadoes were confirmed on radar because of the large debris field.

The storm blew through the Bensalem and New Hope areas of Bucks County on the Pennsylvania side of the Delaware River. That same line of thunderstorms crossed over into Hopewell Township and Trenton in Mercer County. Witnesses reported seeing a large tornado on the ground. WATCH: Tornado damage across Philadelphia region

The path of destruction left behind uprooted trees, parts of homes and businesses ripped off. Chopper 6 was over the area Friday morning:

The morning after a tornado swept through, Chopper 6 surveys the damage in Hopewell Township, Mercer County.

Matt Maximuck, who owns a 100-acre farm in Buckingham, says the storm sounded like a freight train. "It blew the roof off my barn and as you can see, shattered the glass windows on my greenhouses. It was a mess," said Maximuck.

In nearby Plumstead, a giant 50 to 60-foot tree came crashing down in a garage as a frightened homeowner sat nearby. "It sounded like a bomb went off, things were hitting the house. It was very scary," said Virgina Sodi. SEE ALSO: Storm leaves path of destruction after 'dangerous tornado' spotted in Philadelphia region

At the Faulkner dealership, you could see buildings were torn apart and cars flipped over.

The sound of chainsaws could be heard all through the area as people tried to cut pathways through the debris. Crews were also hard at work to restore power to the customers. "We were down in the basement as it blew through here. There was a lot of wind bringing down all sorts of stuff. If you go down the road, you can see a straight line of trees that were brought down and power lines," said Dave Bloom of Buckingham. There are multiple road closures in effect until further notice. The current list includes a complete closure of Street Road from Richlieu Road to Trevose Road; Old Lincoln Highway from Route 1 to Bristol Road; the area of Linconia Park has also been closed to all traffic. The Red Cross has opened a shelter at Neshaminy High School for anyone who needs it. A possible tornado also struck Weisenberg Township, Lehigh County. Two other tornado locations were confirmed by the debris field on radar: Bensalem/Trevose area and Waretown/Barnegat Light area. Our sister station WABC-TV was over the storm damage on Long Beach Island, Ocean County:

Action News Meteorologist Karen Rogers explains, typically, tornadoes in our area are not on the ground long enough to collect enough debris that they can be spotted on radar. However, three such tornadoes occurred on Thursday.

The National Weather Service will be on the scene across the Philadelphia region Friday to survey damage from the storm.

"Two weeks ago we would've been standing in the shade. Now, there is no shade. There used to be a forest in back of us. Now, there is no forest," said Dean Polk, of Wenonah.
GLOUCESTER COUNTY, NJ・3 DAYS AGO
6abc Action News

Officers say someone in the crowd fired shots, but no one was hit. However, police say a man was hit by one of the cars and sent to the hospital.
PHILADELPHIA, PA・37 MINUTES AGO
6abc Action News

PHILADELPHIA (WPVI) -- One person is dead and two others injured after an apartment fire Saturday in Southwest Philadelphia. Flames broke out just after 7 a.m. on the 8500 block of Lindbergh Boulevard. Fire officials say they arrived to heavy fire conditions showing from the first floor of the building....
PHILADELPHIA, PA・12 HOURS AGO

Sources say the man walked into the Upper Darby Police Department saying, "You want to talk to me because I want to talk to you about killing my girlfriend."
MONTGOMERY COUNTY, PA・1 DAY AGO
6abc Action News

We meet some entrepreneurs who launched pandemic side hustles from new roasters to bakers and more. Plus, a new "Zen lounge", and a preview of Restaurant Week in Atlantic City.
PHILADELPHIA, PA・1 DAY AGO
6abc Action News

MOUNT HOLLY, New Jersey (WPVI) -- There's an effort underway to support those who are struggling with addiction in Burlington County, New Jersey. Police, counselors and other specialists were going door-to-door at the Knights Inn in Mount Laurel and the Motel 6 in Maple Shade on Friday in an attempt to connect people with services to help with substance abuse.
BURLINGTON COUNTY, NJ・1 DAY AGO
6abc Action News

COATESVILLE, Pennsylvania (WPVI) -- Flooded with two feet of water, the First Baptist Church of Bernardtown has been closed since Ida tore through the region. The tiny church in South Coatesville had just reopened in July, welcoming back a vaccinated congregation. Pastor Garnell Bruncon blames poor drainage on Youngsburg Road...
COATESVILLE, PA・4 DAYS AGO
6abc Action News

The body was found Thursday afternoon near an apartment complex on the 3200 block of Bristol Road.
BENSALEM TOWNSHIP, PA・2 DAYS AGO
6abc Action News

NRG Energy says about 90 Canada geese have died after last week's 30,000-gallon diesel fuel spill at its power plant on the Indian River in Delaware.
MILLSBORO, DE・2 DAYS AGO

The process is now underway to vaccinate more than 100 animals against COVID-19 at the Philadelphia Zoo.
PHILADELPHIA, PA・2 DAYS AGO
6abc Action News

A large group of people, believed to be soccer fans, are accused of beating a man to death early Thursday morning at Pat's King of Steaks.
PHILADELPHIA, PA・2 DAYS AGO
6abc Action News

Police say the driver of an SUV traveling northbound collided with another vehicle on the Roosevelt Boulevard.
PHILADELPHIA, PA・2 DAYS AGO
6abc Action News

NEWTOWN SQUARE, Pennsylvania (WPVI) -- The DiChiacchio family of Delaware County, Pennsylvania got a reason to celebrate Tuesday afternoon after a difficult year that involved a house fire and a fatal car crash. They are going to Boston for a family vacation - all expenses paid. Brandon DiChiacchio was wearing...
DELAWARE COUNTY, PA・4 DAYS AGO
6abc Action News

Three Sharon Hill police officers mistakenly thought they were being fired upon from the vehicle and discharged their weapons more than a dozen times, sources tell Action News.
DELAWARE COUNTY, PA・2 DAYS AGO
6abc Action News

Pennsylvania residents who are unvaccinated against COVID-19 were far more likely to contract the virus, become hospitalized and die than those who got the shot, data shows.
PHILADELPHIA, PA・4 DAYS AGO
6abc Action News

The new "enterprise headquarters" will be located in the former Navy Yard in South Philadelphia, offering a space for teams across Rite Aid's various businesses.
PHILADELPHIA, PA・4 DAYS AGO