Review: Turning Beijing’s playbook against it 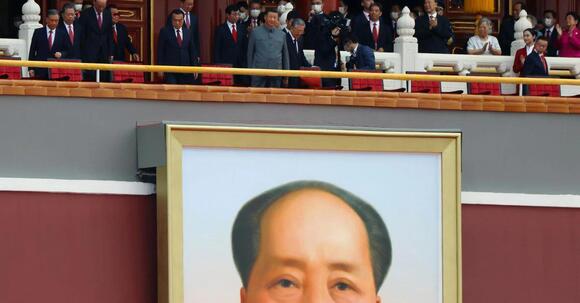 HONG KONG, July 30 (Reuters Breakingviews) - In a 1973 meeting with an American delegation, Chinese Premier Zhou Enlai caught his interlocutors off guard by asking: “Do you think China will ever become an aggressive or expansionist power?” When his U.S. counterpart politely replied in the negative, Zhou disagreed. “It is possible. But if China were to embark on such a path, you must oppose it. And you must tell those Chinese that Zhou Enlai told you to do so!”

Rush Doshi, China director on President Joe Biden’s National Security Council, quotes this advice in “The Long Game: China’s Grand Strategy to Displace American Order”. He then proposes that the White House take it. A former Fulbright scholar with fellowships at the Brookings Institution and Yale University’s Paul Tsai China Center, Doshi argues that China is not only attempting to sabotage global governance norms led by the United States but is trying to place itself at the top of a new system modelled in its autocratic image. It’s a very hawkish assessment of Chinese intentions. But 60 pages of painstaking footnotes, many of them quoting internal statements by Communist Party leaders and intellectuals, make it rather compelling.

During the Cold War China was a quasi-ally of America. But after the Soviet Union collapsed the Chinese Communist Party grew suspicious. The United States easily toppled Iraq’s Saddam Hussein on the flimsiest of pretexts. That terrified Chinese officials who were convinced the Americans aspired to repeat in Beijing what they had accomplished in Moscow.

The CCP’s strategy to prevent that outcome consisted of two phases which Doshi calls “blunting” and “building”. First, the People’s Republic joined and then hobbled international institutions like the World Trade Organization. This protected the country from tariffs that could have crippled its export sector and made it harder for America to project its influence. Next Beijing built alternatives it could control, such as the Asian Infrastructure Investment Bank. On the military front it first invested in sea mines and long-range missiles to fend off the U.S. Pacific Fleet, then built aircraft carriers to project sea power further afield.

At the same time, China drew heavily on American finance and expertise to reverse-engineer industrial champions. Today, Chinese companies compete head-to-head with Western multinationals in railway technology, networking equipment and clean energy. The near-implosion of the U.S. financial system in 2008 and the election of President Donald Trump eight years later appear to have convinced Beijing it has an opportunity to push America aside entirely.

Doshi sees little room for accommodation. Aside from cooperation on curbing global warming, he advocates using China’s tactics against itself. The United States and allies like Japan should join China-led institutions, including the Belt and Road infrastructure initiative, and then seek to dilute Beijing’s influence. They should also reinvigorate forums that China has sabotaged, like the Association of Southeast Asian Nations.

The Pentagon should mimic the People’s Liberation Army by spreading drones and missiles and small bases around the southern Pacific. Influential media platforms like TikTok must sever links with their Chinese subsidiaries and shareholders or face a ban. The Treasury should develop a digital dollar to defend the greenback’s global position.

Doshi gives the business side of the equation less attention than diplomatic and military facets. Yet Beijing derives much reassurance from American corporations which have poured almost $300 billion into the country over the last three decades, according to Rhodium data. Hollywood studios grovel for market access, painting China in glowing tones. Even as admirals fret about armed Chinese drone swarms, American venture capitalists shower money on mainland artificial intelligence startups.

To get the private sector back on side, Doshi proposes forcing chief executives to focus on “longer term planning”. He suggests changing capital gains taxes to encourage investors to hold shares for longer periods. While such tweaks may have merit, they’re unlikely to change the way executives approach the People’s Republic. China was the third-largest market for American goods in 2019, and a critical part of the U.S. supply chain. Giants like Goldman Sachs (GS.N), Starbucks (SBUX.O) or Apple (AAPL.O) are not in China for a quick buck.

Back at home, Doshi recommends a Beijing-style industrial strategy to revive U.S. manufacturing. Yet reversing the hollowing-out of American industry appears at odds with the free trade principles and dollar dominance that Doshi proposes to preserve.

It’s also far from clear that the political system can implement Doshi’s ideas. Sympathetic executives and allies must factor in the possibility that voters will eject Doshi’s ultimate boss from office in 2024. Given America’s deep political divisions, it’s hard to see legislators agreeing on any coherent strategy, much less sticking with it for decades as Beijing has.

China’s bid for dominance might yet fail due to its inherent contradictions: the CCP’s enthusiasm for trade surpluses, the country’s looming demographic and debt crises, and the ethnocentric, xenophobic nature of President Xi Jinping’s Chinese Dream. Democracies can hope, but hope is not a strategy.

Reuters Breakingviews is the world's leading source of agenda-setting financial insight. As the Reuters brand for financial commentary, we dissect the big business and economic stories as they break around the world every day. A global team of about 30 correspondents in New York, London, Hong Kong and other major cities provides expert analysis in real time.

Chinese state-run Global Times media outlet published an op-ed from its editorial board on Wednesday vowing that China’s military will soon confront the U.S. in a hostile exchange. “The US will definitely see the PLA show up at its doorstep in the not-too-distant future,” the op-ed said. “The two sides’...
POLITICS・6 DAYS AGO
The US Sun

CHINA has sparked World War 3 fears after warning it will sail warships into US waters near Hawaii. Tensions between Beijing and Washington DC are reaching boiling point over the South China Sea after US Naval ships cruised into the contested waters. The US Navy announced last week that the...
HAWAII STATE・3 DAYS AGO
dallassun.com

Chinese state media warns US of another 'deadly attack'

Beijing [China], September 12 (ANI): The editor of Chinese state media, Global Times, Hu Xijin on the 20th anniversary of the 9/11 terror attack predicted that there will be another "deadly attack" in the US. "The September 11 attack was suicide attacks by 19 terrorists, but it was not the...
JOE BIDEN・4 DAYS AGO
New York Post

How Whitney Duan became China’s richest woman, then vanished without a trace

Once upon a time, Weihong “Whitney” Duan was the poster woman for the Chinese dream. After growing up poor, she wheeled and dealed her way to a billion-dollar fortune, making her name as China’s most successful female entrepreneur. Then, on Sept. 5, 2017, at age 50, she simply disappeared from...
ECONOMY・4 DAYS AGO

"If they want to baselessly accuse China, they better be prepared to accept the counterattack from China," warned Fu Cong, of the Chinese Foreign Ministry.
PUBLIC HEALTH・22 DAYS AGO
New York Post

China’s most famous defector to America warned US intelligence agencies a coronavirus was spreading in Wuhan in November 2019 – six weeks before China admitted there was an outbreak. Wei Jingsheng, the father of China’s democracy movement, reveals in a new book, “What Really Happened in Wuhan,” that he first...
WORLD・2 DAYS AGO
Newsweek

Beijing [China], September 12 (ANI): In a campaign against Western influence, China is rejecting the use of the English language in its educational institutions. Li Yuan, writing in The New York Times (NYT) said that it was hard to exaggerate the role English has played in changing China's social, cultural, economic and political landscape.
CHINA・4 DAYS AGO

China is already sending aid to Taliban-controlled Afghanistan, filling the gap the US left

Western powers like the US and UK have suspended aid programs to Afghanistan. China is pledging millions of dollars to help the Taliban.
FOREIGN POLICY・3 DAYS AGO
Birmingham Star

China warns US against adding 'Taiwan' to name of Taipei's

Beijing [China], September 15 (ANI): China has warned the United States against recognising a change of the name of the Taipei Economic and Cultural Representative Office in Washington to the Taiwan Representative Office, urging America to abide by the one-China principle. This comes amid reports that America is "seriously considering"...
FOREIGN POLICY・1 DAY AGO
Washington Examiner

China forces US to get serious about decoupling

Reports indicate that last week’s phone call between President Joe Biden and Chinese President Xi Jinping was contentious. Washington has been debating for a few years about whether, or how, to decouple from Beijing. But Biden appears undecided on what exactly his China policy will be. Meanwhile, Xi appears to have made up his mind about the degree of distance he wants between the two great powers, and he’s making it happen. It’s past time for U.S. policymakers to get their act together.
FOREIGN POLICY・2 DAYS AGO
Reuters

China’s new proposed law could strangle the development of AI

China’s internet watchdog, the Cyberspace Administration of China (CAC), recently issued a draft proposal of regulations to manage how technology companies use algorithms when providing services to consumers. The proposed law mandates that companies must use algorithms to “actively spread positive energy.” Under the proposal, companies must submit their algorithms...
TECHNOLOGY・1 DAY AGO
The Guardian

The instinctive reaction of many analysts to the new military tie-up between the US, the UK and Australia was to ask – how will China respond?. No surprises there. As reflectively defensive as that question is, every foreign policy decision has to be calibrated against a response from other parties.
INDIA・13 HOURS AGO
CNBC

China's rumored ambitions to dive into Afghanistan are overstated and unrealistic, experts say

While China has made clear its approval of the Taliban, that doesn't necessarily mean it's ready to commit to doing business with them. Afghanistan's mineral wealth is staggering — but security risks and a lack of infrastructure make investment there difficult. One of the first things many Western pundits predicted...
AFGHANISTAN・6 DAYS AGO
Newsweek

China did not respond to questions about North Korea's newest missile tests, instead urging all parties involved to "actively engage in dialogue and contact."
U.S. POLITICS・3 DAYS AGO
Newsweek

The U.S. Should Take Note of China's New Generation of Nationalists | Opinion

A more united country, where the values of American citizens are put first, is a stronger one.
FOREIGN POLICY・3 DAYS AGO
swlexledger.com

OPINION EDITORIAL: Time to End the Chinese Suppression of Taiwan

Lexington County, SC 09/14/2021 (Elliot Wang) - China has undermined and restricted the representation of Taiwan on the global stage for far too long. For 50 years, the People’s Republic of China (PRC) has placed undue pressure on many countries and international organizations to continue to ignore Taiwan. There is...
LEXINGTON COUNTY, SC・2 DAYS AGO
albuquerqueexpress.com

Beijing [China], September 14 (ANI): Afghanistan has long been considered a graveyard for conquerors--Alexander the Great, the British Empire, the Soviet Union and now the United States. Now China has entered the graveyard and some in Beijing claimed that China would succeed where the United States had failed. But Seth...
AFGHANISTAN・1 DAY AGO
POLITICO