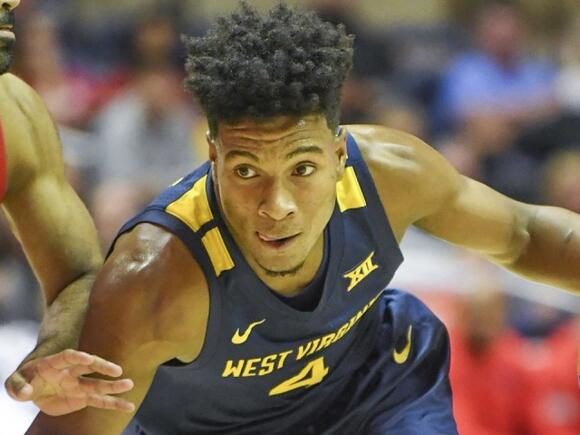 The 2019 Moeller graduate was selected No. 36 overall in the second round of the NBA Draft Thursday night by the Oklahoma City Thunder. That pick was reportedly traded to the New York Knicks, according to ESPN.

McBride, a former West Virginia University guard and Moeller standout, is the second Moeller graduate selected in the draft in the past three years. New Orleans Pelicans center/forward Jaxson Hayes was the No. 8 pick in the 2019 draft.

McBride, who won back-to-back Division I state titles at Moeller in 2018 and 2019, declared for the NBA Draft April 2 after an excellent second season at West Virginia.

He was an All-Big 12 Conference second team selection for the Mountaineers this past season. He averaged 15.9 points, 4.8 assists, 3.9 rebounds and 1.9 steals in helping the Mountaineers to the round of 32 teams in the NCAA Tournament.

McBride improved his stock in late June at the NBA Draft Combine. That ascension led those close to McBride to believe he would be a first-round selection.

"Miles was a great shooter for us. I think an underrated shooter. He became a good shooter. But I'm watching him at the (combine) and he's not even hitting the rim; it's just swish after swish. Whatever environment you put him into he's able to rise up to that and actually exceed it."

McBride told the media after a workout in mid-July that he wanted NBA teams to know about his competitive nature. He conducted eight workouts and visited 10 NBA cities the past few weeks.

"I feel like I really killed the pre-draft workouts so I'm just like, 'Man, whatever team takes me I can't wait to get to work,'" McBride told WCPO earlier this week.

Kremer received phone calls from NBA teams going back to this past winter. He has discussed McBride's "unflappable maturity" and competitiveness on the court.

"I'm confident he will do well," Kremer said. "He's just a special kid. He's an easy one to root for."

Derrick Rose of the New York Knicks had an excellent season last year. Rose, a former NBA MVP, had to transform his game from being super explosive (after several injuries) to being moderate-tempo player. The 32 year old has not made an All-Star game since 2012, but he was a...
NBA・10 DAYS AGO
Empire Sports Media

The New York Knicks made it a priority to upgrade the point guard position this off-season, which included letting former draft pick Frank Ntilikina hit the streets in free agency. Ntilikina, who has been looking for a new home the past few weeks, is expected to sign with the Dallas Mavericks, according to Marc Stein.
NBA・10 DAYS AGO
NBA Analysis Network

The New York Knicks didn’t have widespread changes to their roster this season as many had predicted. Armed with the most cap space in the NBA and multiple first-round draft picks, many expected New York to make a splash. The old Knicks would have made that splash. Even if the...
NBA・12 DAYS AGO
AllPacers

NBA power rankings: The Milwaukee Bucks will look to defending their NBA championship once the season gets going in mid-October.
NBA・11 DAYS AGO
FanSided

New York Knicks: Should there be concern regarding Julius Randle?

Should the New York Knicks bank on Julius Randle replicating his breakout season?. During last year’s regular season, Julius Randle was in the midst of the best statistical season of his career thus far and was leading the New York Knicks back to relevancy in the Eastern Conference for the first time since Carmelo Anthony donned the Blue and Orange.
NBA・12 DAYS AGO
FanSided

Will the New York Knicks regret not signing DeMar DeRozan?. From all accounts, the offseason has been a success for the New York Knicks. They improved the roster while maintaining some level of financial flexibility heading into the future. Overall, the Knicks should be a better team this season. However,...
NBA・13 DAYS AGO
Yardbarker

Jericho Sims, the New York Knicks‘ 58th pick in the NBA Draft, will be spearheading the Westchester Knicks’ campaign in the reformatted G League season. The new G League format will feature two tournaments within the season. On top of the 36-game regular season, there will be a 14-game expanded Showcase Cup bringing the total games to 50 each team.
NBA・11 DAYS AGO

From crying about drafting a future NBA All-Star to chanting that Trae Young is balding in a home playoff game, New York Knicks fans have come a long way over several years!. The Knicks made their first playoff appearance since 2013 last season, and while they did lose to Young and the Hawks, who went on to reach the Eastern Conference Finals, the Knicks learned a lot about themselves.
NBA・13 DAYS AGO
FanSided

Are you frustrated with some of the New York Knicks‘ recent draft selections? Do you wish the franchise had a reset button that you could hit to do things over again? Do you enjoy suspending belief and using your imagination? Then you’ll love a good, old-fashioned, NBA Re-Draft article!. Thankfully,...
NBA・11 DAYS AGO
Dallas News

It appears the Dallas Mavericks are adding another young guard to a roster full of them. Marc Stein reported Tuesday that the Mavs are expected to sign former New York Knicks guard Frank Ntilikina in the coming days. The 6-foot-4, 200-pound guard was who some expected the Mavs to select...
NBA・11 DAYS AGO
bleachernation.com

The Knicks Were “Leaning Toward” Going After DeMar DeRozan This Offseason

When word broke the Chicago Bulls wanted to get their hands on DeMar DeRozan, people were surprised. Then, when Arturas Karnisovas and Marc Everley went to the lengths they did to accomplish that, people were … uh … even more surprised. Thaddeus Young, Al-Farouq Aminu, and a second-round pick went...
NBA・12 DAYS AGO

While they have made the playoffs two of the last three NBA seasons, the last time the Orlando Magic were truly relevant in the Eastern Conference was when Dwight Howard was playing with the Magic early in his career. Since Howard has left this organization, the Magic have gone 253-466 and are now facing yet another rebuilding process.
NBA・10 DAYS AGO
FanSided

It’s always fun to take a look back at Miami Heat history. One of the most interesting aspects of the game to look at is trade history with certain teams. By investigating certain deals made in the past, it’s usually easy to tell which team came out on top. As they say, hindsight truly is 20/20, especially when it comes to trades.
NBA・10 DAYS AGO
talesbuzz.com

What NBA insiders really think of the new-look Knicks

Sign up here to get Inside the Knicks delivered to your inbox each Wednesday morning. The Knicks’ roster is stronger, but their place in the Eastern Conference standings may end up being weaker. That’s the latest scouting consensus on the 2021-22 Knicks. “The new players coming in, they got better,”...
NBA・9 DAYS AGO
chatsports.com

NEW YORK, NY - MARCH 20: Jeremy Lin #17 of the New York Knicks steals the ball in the second half against Andrea Bargnani #7 of the Toronto Raptors (Photo by Chris Chambers/Getty Images) The Toronto Raptors didn’t have a ton of postseason success in the pre-Masai Ujiri era, and...
NBA・12 DAYS AGO

A popular conversation constantly revolving around not just the New York Knicks but the whole NBA is how some of basketball’s all-time greats would fair in different eras. Part of what makes the topic so interesting and fun to speculate about is the fact that every era of the game is so incredibly different. The NBA today is nothing like it was during its inception in the mid-1940s. Heck, it is very different now from what it was like even 10 years ago.
NBA・8 DAYS AGO
USA TODAY Sports Media Group

More often than not, even the best rookie of each class needs a little time to truly get their bearings once they get to the NBA level from college or overseas. That was most decidedly not the case for Boston Celtics legendary small forward Larry Bird however, who was more than able to keep pace with some of the biggest stars of the league at the time when he was still a rookie.
NBA・6 DAYS AGO
chatsports.com

Mitchell Robinson will be entering his fourth season with the New York Knicks, with some major question marks to address. His career thus far has undoubtedly been solid, as he easily outplayed his draft position (36th overall in 2018) once he stepped foot on an NBA court. New York Knicks:...
NBA・7 DAYS AGO