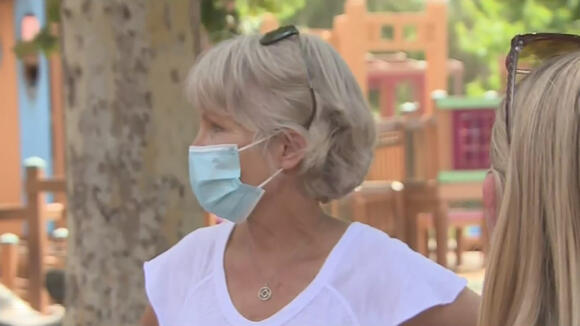 SACRAMENTO (CBS13) – Sacramento County is the latest county to issue an indoor mask mandate, joining Yolo County only days later. Some people feel new restrictions may be on the way.

“It’s kind of inevitable. If you don’t get a certain amount of people vaccinated – this is how it works,” said Tanner Mixon, who spent the afternoon at the park with his kids and enjoying a break from his shifts at the hospital.

“We are starting to see numbers creep back up because of the Delta variant,” Mixon added.

“The last number of reports we’ve got — all of them were the Delta variant,” Dr. Kasirye said.

For many people, things are starting to look and feel like last year.

This new chapter of the pandemic is testing people’s patience – with many who just want to move on.

“It’s not too much of a concern – I just want things to go back to normal,” said Daniel, who was visiting Sacramento from Southern California.

Still, cases are climbing in populations big and small. Across the state, more than thirty counties would be in California’s widespread and most restrictive purple tier if it still existed. That includes almost every county across the Greater Sacramento region, which means they would be facing closures.

“I think there’s going to be another spike,” said Phil Cunningham, who’s wondering what events he can plan for. “In fact – we have a fundraiser scheduled mid-August. And we’re wrestling right now with – what do we do?”

When it comes to future restrictions, Dr. Kasirye says that’s not in the plans because this year, we have a vaccine. But when many continue to refuse it, there’s a collective feeling of frustration among the vaccinated.

“I’m very discouraged about the fact we’re not getting through this pandemic the way we were hoping,” said Merete Glick.

Dr. Kasirye said vaccines are our main way out, and says the current mask mandate helps avoid future mutations to add more protections for everyone – including those who don’t have the shot.

As for when the mandate may be lifted, Dr. Kasirye did not list a specific metric – only when there’s low to moderate transmission of the virus.

LOS ANGELES (CBSLA) – The Los Angeles County Department of Health on Friday officially announced its latest COVID-19 health order requiring customers at certain outdoor and indoor venues provide proof of vaccination. Patrons at bars, lounges, breweries, wineries and nightclubs will have to show proof of at least one dose of the COVID-19 vaccine by Oct. 7 and proof of full vaccination by Nov. 4. The rule also applies to so called mega-outdoor events of 10,000 people or more, as well as amusement parks, which aligns with federal mandates for those types of events. “This modified health officer order aligns with the continued need to reduce risk for transmission and increase vaccination coverage, and it offers us a reasonable path forward and hopefully positions us to be able to better break the cycle of surges,” said Dr. Barbara Ferrer, LA County Health Director. Health officials also strongly recommended that restaurants follow a similar vaccine verification system, though it is not currently required. The county health department on Friday also reported 1,823 new cases of COVID and 25 coronavirus-related deaths.
LOS ANGELES COUNTY, CA・9 HOURS AGO
Metro News

Greenbrier County’s health department has issued an indoor mask mandate, effective immediately. The order comes as covid-19 cases and hospitalizations continue at record levels around the state. Gov. Jim Justice, who ordered a statewide mask mandate last year, for weeks now has said such decisions need to be made at the local level.
GREENBRIER COUNTY, WV・14 HOURS AGO
lamarledger.com

Pitkin County this week joined a growing list of Colorado counties mandating public indoor masks, joining Boulder County which reinstated an indoor mask mandate earlier in the month. Face masks are required in Pitkin County for everyone 2 years old and older, regardless of a vaccination status, the Aspen Times...
PITKIN COUNTY, CO・14 HOURS AGO
Bring Me The News

Three counties in the Twin Cities metro have reached an 80% vaccination rate among those age 16 and up. In Washington County, 80.8% of the 16-plus population has had at least one dose of a COVID vaccine, as of Thursday afternoon's publicly provided data. Hennepin and Dakota are both at 80%.
WASHINGTON COUNTY, MN・1 DAY AGO

FL’s COVID death toll has reached the 50,000 mark; only two other states have higher numbers

Quality Journalism for Critical Times Florida’s COVID-19 death cases rose to the 50,000 threshold in September, illustrating the breadth of residents who died in a pandemic that continues to ravage older and younger people in the state. Only California and Texas have had higher numbers of deaths, according to data from the Centers for Disease Control and Prevention (CDC). The […] The post FL’s COVID death toll has reached the 50,000 mark; only two other states have higher numbers appeared first on Florida Phoenix.
FLORIDA STATE・1 DAY AGO
Secret LA

Patrons and employees will need to show proof of vaccination from October 7. On Wednesday, L.A. County health officials announced that proof of vaccination will be necessary for high-risk settings. This includes bars, breweries, wineries, clubs and lounges. The new public health order will require employees and customers to have the first dose of the vaccine by October 7 and the second by November 4.
LOS ANGELES COUNTY, CA・2 DAYS AGO
KION News Channel 5/46

SALINAS, Calif. (KION) During public comment at last week’s Monterey County Board of Supervisors meeting, there was anger and strong opinions from both sides, over the implementation of a countywide indoor mask ordinance. That ordinance now moving forward. The Monterey County Board of Supervisors approved language for a countywide indoor...
MONTEREY COUNTY, CA・1 DAY AGO
HeySoCal

COVID: Hundreds Of East Bay Doctors Make Urgent Plea To Get Vaccinated – ‘We Are Tired Of The Suffering’

OAKLAND (CBS SF) – Hundreds of East Bay doctors have signed onto an urgent plea for unvaccinated patients in their care to receive their COVID-19 shots, amid the ongoing spread of the Delta variant. “You’ve trusted us with every other aspect of your health. Please trust us with this,” said the open letter signed by 400 physicians of the Alameda-Contra Costa Medical Association. “We are not asking you to do anything that we have not done ourselves,” the doctors went on to say, noting that more than 96% of U.S. physicians have received the COVID-19 vaccine as of June. Dr. Suparna Dutta, the...
OAKLAND, CA・1 DAY AGO
CBS San Francisco

WALNUT CREEK (CBS SF) — Contra Costa County is joining San Francisco and Berkeley in requiring proof of vaccination or a recent negative COVID test at the door to step inside certain businesses. County health officials said tightening the restrictions on indoor access was needed to reduce community transmission of the Delta variant. For the most part, Tuesday’s health order is getting support from businesses and residents in Orinda. It was busy Tuesday night at the 4th Bore Tap Room and Grill in Orinda where the staff will be required to check for for proof of vaccination or a negative COVID test...
CONTRA COSTA COUNTY, CA・2 DAYS AGO
Eater

LA County to Require Proof of Vaccination at Bars, Nightclubs, and More Next Month

DENVER (CBS4) – The Colorado Department of Public Health and Environment along with state testing groups say there has been a steady increase over the past few weeks as the Delta variant continues to make COVID-19 more contagious. Testing services say the demand for results related to travel quickly transitioned to requirements for schools and student activities. (credit: CBS) “Testing demand has definitely gone up and we are working hard to kind of match that,” said Suzane Ferdows, a regional manager for COVID Check Colorado. “Usually if you plan your appointment the night before, we’ll definitely get you in.” CDPHE says there are...
COLORADO STATE・2 DAYS AGO
WDTN

MONTGOMERY COUNTY, Ohio (WDTN) – Across Montgomery County, the number of COVID-19 cases continues to increase and people continue to be hospitalized with the virus. Health leaders continue to call for local jurisdictions and people in power to enforce mask mandates where they can. “This is something that we’re recommending;...
MONTGOMERY COUNTY, OH・4 DAYS AGO
nbcboston.com

Portland may become Maine's first city with an indoor mask requirement since state restrictions were lifted earlier this year. The Portland City Council held a workshop Wednesday to discuss days after city health officials recommended leaders make mask-wearing mandatory in all indoor public spaces, regardless of whether or not someone has been vaccinated.
MAINE STATE・8 DAYS AGO
Dayton Business Journal

Due to the recent surge of the Delta variant and aligning with CDC guidance, Boulder County Public Health (BCPH) issued Public Health Order 2021-08 requiring masks in all indoor public settings during periods of substantial or high transmission as defined by the CDC’s Data Tracker. The order goes into effect Friday, September 3 at 5 p.m. and requires masks in all indoor public spaces for all individuals 2 years and older regardless of vaccination status.
BOULDER COUNTY, CO・8 DAYS AGO
cbslocal.com

SALINAS (BCN) – The Monterey County Board of Supervisors balked Wednesday at mandating face coverings indoors regardless of COVID-19 vaccination status but encouraged residents to do so regardless. After two hours of discussion and public comment, the board voted 3-2 in favor of the mandate, but it needed a four-fifths...
MONTEREY COUNTY, CA・9 DAYS AGO
NBC Chicago

Several Chicago businesses were cited for violating the city's indoor mask mandate so far this month, officials said Tuesday. According to Chicago Mayor Lori Lighftoot's office, the Department of Business Affairs and Consumer Protection (BACP) issued one "notice to correct" and 10 citations to businesses between Sept. 2 and Sept. 5.
CHICAGO, IL・9 DAYS AGO
WMTW

PORTLAND, Maine — Portland’s City Council did not act Wednesday night on a proposed new indoor mask mandate, deciding instead to revisit the topic during a special meeting Monday night. “That’s where I am, fully in support, interested in maybe taking our time so that we can refine where we’re...
PORTLAND, ME・9 DAYS AGO