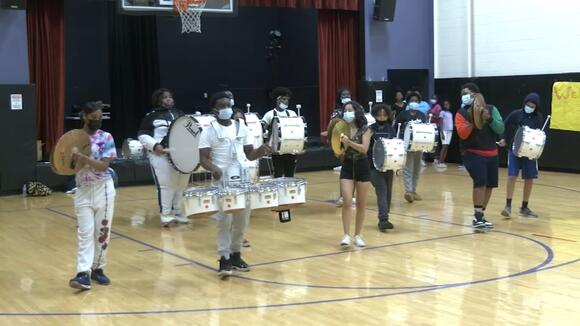 After weeks of practice at Marillac St. Vincent's Family and Youth Center in East Garfield Park, it's almost showtime for a performance on the biggest stage of their lives. "I have always to be a part of a drum line and this is the perfect opportunity to do so," said Isabel Vinaja who is part of the band. BandWith Chicago and Chicago West Community Music Center are taking their drum line and dance team to perform in front of tens of thousands of people at Lollapalooza on Sunday afternoon. "It's really cool because I just never thought something like this would happen but I always hoped it would," said Seamus Palomino, a band member. They got the call just last month. RELATED: Lollapalooza gates open in Grant Park with vaccine policy, testing requirements in place "The first response was just disbelief and excitement and then my second move was to call my instructors." Annie Palomino, the executive director of BandWith Chicago. "So I called them all the next day and said 'Are you up for this?" Both organizations primarily work with young people from under-resourced communities, exposing them to music and dance. "We need an escape to be free, to express ourselves in whatever way we want to do," Ajae Thomas, a dance team member Demya Jackson said she just wants to make her family proud by setting goals and achieving them. "Most people didn't pursue their dreams, I want to do something else," she said. The group young said they're more than prepared to put on an unforgettable show during their 10-minute set. "I'm very brave because it's not going to be my family," Jackson said. "It's going to be thousands of other people that's going to be there that I don't even know." Their performance is scheduled for Sunday at 12:30 p.m. on the Bud Light Selzer Stage.

Setup is underway for the inaugural Englewood Music Fest at 63rd & Halsted. It gets underway at noon Saturday.
CHICAGO, IL・1 DAY AGO
ABC 7 Chicago

"During this difficult time, it is particularly important that the faithful have access to the grace and comfort of Holy Mass."
CHICAGO, IL・2 HOURS AGO
ABC 7 Chicago

Chicago traffic: Concerts, sports and festivals make for a busy weekend in city

CHICAGO (WLS) -- The weekend is expected to be a busy one as Chicago gets out to enjoy the last weekend of summer. From concerts to sporting events and art festivals, city officials are telling people to anticipate traffic and report any suspicious activity. The Loop was relatively quiet Friday...
CHICAGO, IL・1 DAY AGO

The Christmas Without Cancer 5k Run/Walk is back in person and virtually.
EVERGREEN PARK, IL・1 DAY AGO
ABC 7 Chicago

Roz Varon takes a look at what's going on in the city and suburbs this weekend.
CHICAGO, IL・1 DAY AGO
ABC 7 Chicago

Each week, we list some events you can attend over the weekend.
AURORA, IL・2 DAYS AGO

The estate of legendary actress and Chicago resident Etta Moten Barnett is up for sale this weekend.
CHICAGO, IL・2 DAYS AGO
ABC 7 Chicago

Here are the organizations that are working to support the Hispanic, Latino and Latinx communities in the Chicago area and throughout the nation.
CHICAGO, IL・5 DAYS AGO

ABC 7's Rob Elgas will lead a discussion with community leaders about how a rise in evictions will cascade into other problems such as overcrowded households and a likely increase in COVID infections, with many parents and children forced to live in shelters or on the street.
ILLINOIS STATE・2 DAYS AGO
ABC 7 Chicago

Visit the Pumpkin Capital of the World for Morton Pumpkin Festival, all on 1 tank of gas

As we head into fall, Roz is taking us on a One Tank Trip to Morton, Illinois for their annual Pumpkin Festival!
MORTON, IL・2 DAYS AGO
ABC 7 Chicago

CHICAGO (WLS) -- Some parents in Chicago and the suburbs are calling for remote learning options as some children are sent home to quarantine. A group of Chicago Public School parents gathered at the center of Logan Square to call for, among other things, a remote learning option, especially for children too young to be vaccinated.
CHICAGO, IL・5 DAYS AGO