Utah to offer incentives for people to ditch lawns for xeriscaping 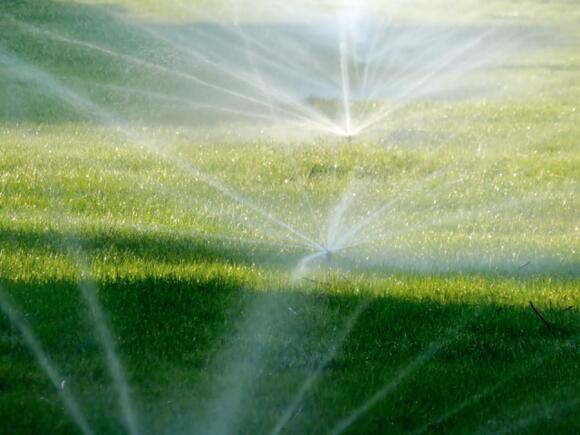 As Utah's drought emergency continues, Governor Spencer Cox is pushing for incentives for people to ditch their lawns in favor of xeriscaping.

"We are committed to advancing more aggressive water conservation measures," the governor said at a news conference on Thursday at the Jordan Valley Water Conservancy District's conservation gardens.

The governor unveiled a series of policy shifts he will push. Some local water districts have already started implementing them. They include:

The Central Utah Water Conservancy District, which supplies water to 50% of Utah's population, said it would begin offering up to $2,000 per home for people to ditch their lawns within the eight counties they serve.

The incentive does not mean anyone has to get rid of their lawn entirely, the water district's Rick Maloy said. They just want it limited to save more water.

"There’s still room for lawn, but we want it to be used in areas where it’s used by the family," he told FOX 13.

Outdoor water use accounts for as much as 60% of a municipal or industrial water supply.

Utah's ongoing drought emergency and dramatic population growth has forced political leaders to implement water conservation policies at a rapid pace. As of Thursday, 98% of the state is in "extreme" or "exceptional" drought — the worst categories.

Of course, some of these initiatives cost money. Senate President J. Stuart Adams told FOX 13 they would have to see some of the proposals to determine if they can use federal funds or if the legislature needs to appropriate money for them.

As FOX 13 reported last month, state officials have warned of water shutoffs if the drought continues into next year . The good news is many Utahns have been listening to the repeated pleas to conserve water. Local water districts are seeing declines in water demand in the hot summer months.

"We’ve seen variable impacts. Some areas are doing better than others," said Brian Steed, the executive director of the Utah Department of Natural Resources. "Those areas that have really gotten down into a danger level in terms of drinking water have actually changed behaviors. So there haven’t those next draconian steps. I’m optimistic we’ll get through this next year and then we can re-evalute where we are going into next year, depending on how much water falls."

In St. George, Mayor Michele Randall said they have ripped up more than 500,000 square feet of turf from city-owned facilities. She has ordered a review of all city ordinances to be more water conservation-friendly.

"We do not need to have grasses like we have," she said.

The city's famed golf courses, an economic engine for the southwestern Utah area, have also adapted. They use recycled water and turf has been ripped up alongside fairways to put in desert-friendly grasses.

Mayor Randall told FOX 13 that St. George will also not build any more golf courses within the resort community. She said other mayors in the area have indicated they will do the same, encouraging golfers to visit what they have.

"No more golf courses in southern Utah," she said. "St. George is done for sure. Now we have to bring the other cities on board and say we can't do it right now. We just can’t. There’s not the water to keep up with the demand on a golf course."

Utahns are conserving a lot of water in drought emergency

Wednesday marked the beginning of Hispanic Heritage Month, and for the first time, the Logan City community celebrated in a big way Saturday.
LOGAN, UT・21 HOURS AGO
FOX 13 News

FOX 13 pieced together a timeline of Gabby Petito and Brian Laundrie's trip through Utah, mostly based on their instagram posts.
UTAH STATE・2 DAYS AGO

In his decades of police service and his time as Salt Lake City’s police chief, Chris Burbank said he knows these law enforcement officers have been working tirelessly to perfect the skills they are using in this investigation.
SALT LAKE CITY, UT・21 HOURS AGO
FOX 13 News

Where to see the best displays of fall foliage in Utah

Signs of autumn have started to arrive - with shades of yellow, red and brown peeking through the green leaves of trees in northern Utah.
UTAH STATE・2 DAYS AGO
FOX 13 News

MIDVALE, Utah — A public memorial service will be held Saturday evening for Staff Sgt. Taylor Hoover, who was killed in a suicide bombing attack in Kabul, Afghanistan on Aug. 26. The service is scheduled for 6:30 p.m. at the Hillcrest High School football field (7350 S. 900 East, Midvale).
MIDVALE, UT・1 DAY AGO
FOX 13 News

A lightning strike sparked vegetation on the east side of the Great Salt Lake on Friday afternoon and within hours the Legacy Fire grew to more than a few hundred acres. The reason why the fire kicked up a massive plume of smoke and produced nearly one-hundred foot flames: Phragmites.
UTAH STATE・3 DAYS AGO

The monument on the side of Highway 91 tells two versions of the same event.
POLITICS・3 DAYS AGO
FOX 13 News

In Thursday's update, The Utah Department of Health reported 1,885 new COVID-19 cases and 15 new deaths - although two of the deaths occurred before September 1.
UTAH STATE・3 DAYS AGO
FOX 13 News

Signature gathering is under way in Wyoming to get medical cannabis on the 2022 ballot.
WYOMING STATE・2 DAYS AGO
FOX 13 News

The town of Newton set up a tribute in honor of S. MeRell Munson, who was killed in a farming equipment accident Sept. 8.
NEWTON, UT・8 HOURS AGO
FOX 13 News

Residents of Salt Lake City are being asked to turn out their lights and shade windows starting Wednesday night as thousands upon thousands of songbirds migrate through the area.
SALT LAKE CITY, UT・4 DAYS AGO
FOX 13 News

FBI arrives in Wyoming to take over search for Gabby Petito

The search continues Friday for Gabrielle Petito in the area of Grand Teton National Park in Wyoming.
WYOMING STATE・2 DAYS AGO
FOX 13 News

Utah near top of list for its love of country music

Donut Day or Peanut Butter and Jelly Day may not receive a lot of recognition, but today--September 17--is International Country Music Day, and a new survey shows just how much Utahns love their country music.
UTAH STATE・2 DAYS AGO
FOX 13 News

More than a hundred people showed up at a hearing on Capitol Hill to push for the legislature to ban businesses from requiring COVID-19 vaccines.
UTAH STATE・4 DAYS AGO
FOX 13 News

Police are asking for the public's help to find a missing woman and at-risk woman who hasn't been seen for several days.
SALT LAKE CITY, UT・2 DAYS AGO
FOX 13 News