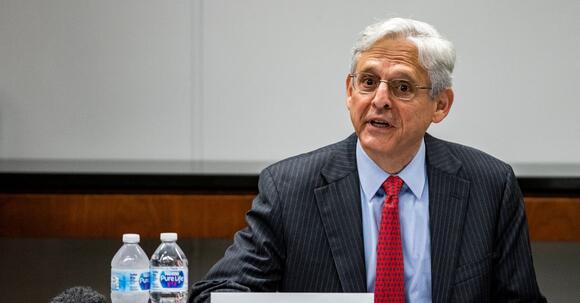 "The order violates federal law in numerous respects, and Texas cannot lawfully enforce the executive order against any federal official or private parties working with the United States," Garland told Abbott in a letter.

He added that if Texas continues to implement the ground restrictions on migrants, then the Justice Department will "pursue all appropriate legal remedies."

Garland's letter comes just a day after Abbott signed the order, which states that "no person, other than a federal, state, or local law-enforcement official, shall provide ground transportation to a group of migrants" who have been detained by federal immigration officials for crossing the border.

It also directs the state's Department of Public Safety to "stop any vehicle upon reasonable suspicion of a violation" and gives the department authority to "reroute such a vehicle back to its point of origin or a port of entry."

The executive order states that the new policy is warranted because of President Joe Biden's "refusal to enforce laws passed by the United States Congress" and the measure is aimed at protecting Texans from exposure to COVID-19.

Garland said the order "would jeopardize the health and safety of noncitizens in federal government custody" and it will also interfere with the implementation of federal immigration law.

The federal government is refusing to enforce federal law and at the same time threatening the state which is protecting its citizens. Time for Texas to declare itself an un sanctuary state and ignore them

If Biden and Kamala would do their job in securing our border and protecting citizens from covid carrying illegal immigrants, then the state wouldnt need to get involved. Lets see what the SCOTUS says…. So far they have upheld deportations, and states rights to self governance… just because the AG is puffing up and shaking his tail feathers, doesnt mean he is in the right. They will keep saying their big lies over and over until it becomes “truth”….

Mr. Garland, the Texas governor has every right to protect the citizens of his state. I (as odd as this sounds) find this amusing as this adminstration you work with goes around threatening the American Citizens of this country who are not vaccined, but yet you are ok with illegal immigrants who are moving around free who are not vaccined and some of whom have covid. Your ok with that? please be honest, Why?

WASHINGTON (Reuters) - The U.S. Senate Judiciary Committee approved on Thursday legislation that would allow state attorneys general to choose which court hears their antitrust cases, a bill that could affect a pending lawsuit against Alphabet’s Google. The bill was sent to the full Senate by a voice vote. Senator...
CONGRESS & COURTS・22 HOURS AGO
Washington Examiner

OKLAHOMA CITY — Oklahoma Attorney General John O’Connor is among 24 AGs across the country demanding that President Joe Biden drop his sweeping COVID-19 vaccine mandates, or face legal actions. The AGs sent a letter to the Biden administration, warning that litigation will follow the implementation of the proposed mandate...
OKLAHOMA STATE・6 DAYS AGO

Texas Attorney General Ken Paxton was in Waco for a campaign event and we brought your questions to him regarding the controversial lawsuits filed against school districts. Local news has never had the opportunity to speak with Paxton until Thursday.
TEXAS STATE・7 DAYS AGO
FingerLakes1

New York Attorney General Letitia James has joined the fight to challenge the Texas abortion law on a national level. The law went into effect this month which outlaws abortions after 6 weeks and it’s now being challenged by the federal government. A legal brief was signed by James as...
TEXAS STATE・7 DAYS AGO
mychamplainvalley.com

ALBANY, N.Y. (NEWS10) – New York Attorney General Letitia James filed an amicus brief in support of the U.S. Department of Justice’s challenge on the Texas abortion ban. The brief was filed in federal district court and rejects the Texas law banning abortions after six weeks. James was one of...
TEXAS STATE・7 DAYS AGO
Austin American-Statesman

State Rep. Matt Krause said Thursday that he plans to challenge embattled Texas Attorney General Ken Paxton during next year's Republican primary. Krause, 41, has represented Fort Worth at the Capitol since 2013 and is a member of the conservative Freedom Caucus. He joins two prominent Republicans who have said they also plan to challenge Paxton: Texas Land Commissioner George P. Bush and former Texas Supreme Court Justice Eva Guzman.
TEXAS STATE・7 DAYS AGO

AUSTIN, Texas — Texas Attorney General Ken Paxton has asked a federal judge to dismiss a lawsuit filed by two Democratic state senators against Gov. Greg Abbott over his plan to redraw political districts during an upcoming special session of the Legislature. In a Wednesday motion, the attorney general's office...
TEXAS STATE・8 DAYS AGO
kgns.tv

LAREDO, TX. (KGNS) - A total of 15 Texas school districts have been sued in the past week for defying Governor Greg Abbott’s ban on mask mandates but some are pushing back against the lawsuits. One district said Wednesday that it doesn’t have such a mandate and isn’t sure why...
TEXAS STATE・8 DAYS AGO
Houston Chronicle

State Rep. Matt Krause, a Fort Worth Republican and founding member of the Texas House Freedom Caucus, is jumping into a crowded primary race for Attorney General Ken Paxton's seat, pitching himself as the staunchest conservative of the three challengers. “Our campaign is going to be focused on being that...
TEXAS STATE・8 DAYS AGO
kjzz.org

Arizona Attorney General Mark Brnovich is suing the Biden administration over the recent vaccine-mandate covering around 100 million workers. Brnovich argues that the president is illegally favoring unauthorized migrants by not forcing them to get jabbed. The Arizona lawsuit tries to use unease over border crossings to argue an unrelated...
ARIZONA STATE・9 DAYS AGO

PHOENIX - Arizona Attorney General Mark Brnovich has filed a lawsuit to challenge President Joe Biden's COVID-19 vaccine mandate for businesses with more than 100 employees. Brnovich says the president's mandate is unconstitutional, and this is the first lawsuit filed in the country against the mandate. "There can be no...
ARIZONA STATE・9 DAYS AGO
msmagazine.com

“[Texas’s Senate Bill 8] is un-American. This is undemocratic. This does not comport in any way, shape or form with the rule of law as we know it. It’s an incredibly dangerous and slippery slope for this country to go down.”. —Massachusetts Attorney General Maura Healey. On Thursday, September 9,...
TEXAS STATE・10 DAYS AGO
KRGV

Texas Attorney General Ken Paxton has filed a lawsuit against the San Antonio Independent School District and Superintendent Pedro Martinez for mandating that all district employees be vaccinated against COVID-19, according to a Monday news release. Paxton is suing the school district for violating Executive Order GA-39, implemented by Gov....
TEXAS STATE・10 DAYS AGO
95.3 MNC

Indiana Attorney General Todd Rokita is considering how he might challenge Pres. Biden’s orders that make businesses with 100 or more employees responsible for making their employees take the COVID-19 vaccine. He said in an interview with WIBC’s Tony Katz that Congress helped create Biden’s path for the mandates. “The...
INDIANA STATE・13 DAYS AGO

(TEXAS TRIBUNE) - Democrats on the U.S. House Judiciary Committee are calling on U.S. Attorney General Merrick Garland and the Department of Justice to prosecute people who are now empowered to file lawsuits against abortion seekers under Texas’ new abortion law. In the letter signed by all Democratic members of...
TEXAS STATE・14 DAYS AGO
Birmingham Star

On Monday, the U.S. announced it added Guatemala Attorney-General Consuelo Porras and five Salvadoran Supreme Court judges to its list of corrupt and undemocratic officials. The accusations by the U.S. are "totally false and unfounded," stressed Guatemala's Public Ministry, adding that they are based on false media reports and unreliable sources.
U.S. POLITICS・9 HOURS AGO