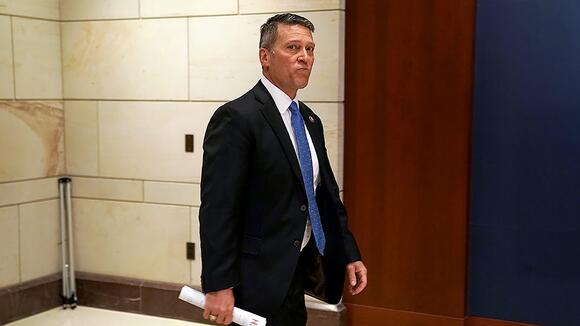 Nearly 40 maskless House Republican lawmakers walked across the Capitol and onto the Senate floor in protest of the Capitol physician’s decision to reinstate a mask mandate in the lower chamber but not in the upper chamber.

Republicans complained that the policy, backed by Speaker Nancy Pelosi (D-Calif.) and other Democrats, is inconsistent, infringes on personal liberty, and is based on politics, not science.

However, the body of the 100-member Senate is less than a quarter of the size of the 435-member House, and all but a handful of senators are vaccinated while dozens of House Republicans have refused to say whether they got the vaccine.

Republicans wanted to show “what it was like on the floor of the Senate versus the floor of the House. Obviously, it’s vastly different,” a maskless Rep. Ronny Jackson (R-Texas), who served as former President Trump ’s White House physician, told The Hill after the protest.

Senators “have the freedom to speak without their mask on and be in there and it's not near as restrictive as it is on the House side. It makes no sense,” he added.

The GOP lawmakers, who have Senate floor privileges as members of the House, tried to time their protest with a speech by Sen. Mike Lee (R-Utah) on individual freedom.

It came on the same day that the U.S. Capitol Police said that congressional aides and visitors could face arrest if they refuse to wear a mask on the House side of the Capitol complex, including the Rayburn, Longworth and Cannon office buildings. But as of Thursday afternoon, there were zero arrests even as dozens of House lawmakers and staffers walked around the Capitol’s hallways without donning a mask.

Capitol physician Brian Monahan’s new mask rules comes amid a surge in COVID-19 cases and hospitalizations, mostly in red states where the vaccination rate is low. Most of those new cases have been identified as the delta variant, which is much more contagious, health experts have said.

In recent days, two House Republicans have informed their colleagues and staff that they have tested positive for the coronavirus: Reps. Vern Buchanan of Florida and Clay Higgins of Louisiana.

Earlier Thursday, Mayor Muriel Bowser said masks will once again be required indoors in D.C. starting this weekend. Public school districts across the country, including in the D.C. area, also announced that students, teachers and staff will have to wear masks indoors once kids head back in the fall.

And in a speech Thursday, President Biden said all federal workers will now be required to verify they have been vaccinated against COVID-19 or face mandatory mask wearing and weekly testing.

“It’s a pandemic of the unvaccinated,” Biden said at the White House. “People are dying who don’t have to die.”

As Democrats charge ahead with writing their massive $3.5 trillion spending bill, which they aim to pass on a party-line vote through budget reconciliation, at least one moderate Republican is warning the bipartisan infrastructure bill may lose GOP votes because it's too intertwined with the reconciliation bill. "I think Nancy...
CONGRESS & COURTS・18 HOURS AGO
News Channel Nebraska

Republicans are trying to distance themselves from Saturday's right-wing rally on Capitol Hill, an event that could present a tough optics problem for the party as Democrats plan to tie all Republicans to the most extreme elements of the GOP. No sitting member of Congress is scheduled to appear at...
CONGRESS & COURTS・19 HOURS AGO
Newsweek

Republicans said Thursday that if the allegations about the calls are true, Milley's "pledge to China is nothing less than outright treason."
CONGRESS & COURTS・12 HOURS AGO
Vanity Fair

On Saturday, Republican lawmakers will once again have to confront the role they played in the Capitol riot, as pro-Trump protesters are descending on Washington, D.C., in support of those being prosecuted for alleged January 6 crimes. Many Republicans would rather forget the insurrection, having voted against a bipartisan panel to investigate it, while some have tried whitewashing the events of that day, even suggesting the deadly attack was like a “normal tourist visit.” But a number of Donald Trump’s most ardent supporters in Congress have grabbed the microphone in recent months to defend the Capitol rioters as “political prisoners” and accuse the Justice Department of unfairly prosecuting them. And while the “Justice for J6” rally, which is being organized by a former Trump campaign aide, has adopted this “political prisoners” line of argument, the Republican lawmakers who ramped up that rhetoric seem unwilling to join the crowd.
PROTESTS・2 DAYS AGO

Fact-check: Did Nancy Pelosi block reading the names of servicemembers killed in Afghanistan?

Following a House of Representatives session on Aug. 31, Rep. Carlos Gimenez, R-Fla., tweeted that Speaker Nancy Pelosi and the Democrats refused to read the names of the 13 U.S. service members who were killed in the airport bombing in Afghanistan. "How badly do Nancy Pelosi and the House Democrats...
CONGRESS & COURTS・3 DAYS AGO
Washington Examiner

The results of California’s recall effort did not go in any Republicans' favor. Californians overwhelmingly supported Gov. Gavin Newsom. And, as much was made about fallout regarding mask mandates, lockdowns, vaccines, and other safety protocols implemented by Newsom, absolutely none of that mattered in the end. This should be an important lesson for the GOP moving forward: Any GOP candidate fighting against mask mandates in blue states will be summarily destroyed at the ballot box.
PUBLIC HEALTH・1 DAY AGO
Fox News

FIRST ON FOX: House Republicans, led by Rep. Chip Roy, R-Texas, on Tuesday submitted a resolution of inquiry in the House to attempt to get answers from the Biden administration on the situation at the southern border. The resolution requests that the administration, through the president, submit documents and communications...
PRESIDENTIAL ELECTION・2 DAYS AGO
POLITICO

So far, top Republicans are staying quiet about the Sept. 18 protest on the Hill in defense of some Capitol riot defendants.
U.S. POLITICS・2 DAYS AGO

WASHINGTON (Nexstar) — Democrats are giving up trying to pass a bipartisan immigration bill through Congress and are now trying to include immigration reform in the budget reconciliation package. That would require only Democratic support. “We have tried with our Republican colleagues time and time again,” New Jersey Sen. Bob...
CONGRESS & COURTS・2 DAYS AGO
Pittsburgh Post-Gazette

A demonstration this Saturday in support of people arrested in the Jan. 6 insurrection has prompted security officials to warn members of Congress and their staffs to stay away from the U.S. Capitol on that day. A memo circulated Tuesday by the new House sergeant-at-arms, William Walker, also pointed out...
CONGRESS & COURTS・2 DAYS AGO
Reuters

WASHINGTON, Sept 14 (Reuters) - U.S. Senate Democrats on Tuesday unveiled a new version of an election reform bill that is a top priority of President Joe Biden, as a wave of Republican state legislatures impose restrictions on voting. Senator Amy Klobuchar and seven fellow Democrats, including moderates such as...
CONGRESS & COURTS・2 DAYS AGO
talesbuzz.com

Secretary of State Antony Blinken faced bipartisan criticism Tuesday over the botched US withdrawal from Afghanistan — as a top Senate Republican questioned whether President Biden is actually calling the shots in the White House. Blinken’s second consecutive day of grilling by Capitol Hill lawmakers even saw the Democratic chairman...
FOREIGN POLICY・2 DAYS AGO

Senior Senate Democrats have reached agreement with moderate Sen. Joe Manchin on a broad overhaul of U.S. voting rights law, a development that should unify all Democrats in the chamber behind a single plan for the first time. The measure would create an automatic voter registration system through each state’s...
PRESIDENTIAL ELECTION・2 DAYS AGO
SFGate

WASHINGTON — With a make-or-break vote looming in the Senate on a sweeping voting-rights and anti-corruption bill, President Joe Biden and his advisers have said in recent weeks that Biden will pressure wavering Democrats to support reforming the filibuster if necessary to pass the voting bill. According to three people...
PRESIDENTIAL ELECTION・4 DAYS AGO
Los Angeles Times

Congress still needs to fix the law that made the Jan. 6 riot possible. Mitch McConnell could help

The House and Senate need to revise their electoral-vote-counting rules, most of which come from an 1887 law called the Electoral Count Act.
LOS ANGELES, CA・4 DAYS AGO

A Republican-led committee of state senators gave the greenlight Tuesday to a bill that would end statewide mask mandates for public schools and childcare centers. Supporters of the measure say it should be up to individual school districts and parents whether to send children to school in a mask. Opponents, including Democrats on the Senate Education Committee, point to guidance from health experts that universal masking is needed to curb the rapid spread of the delta variant of COVID-19.
KENTUCKY STATE・8 DAYS AGO
Walla Walla Union-Bulletin

Florida Gov. Ron DeSantis (R) has plunged to new depths, says a Washington Post editorial published Tuesday. The newspaper’s editorial board said DeSantis, a Donald Trump loyalist, had sunk to “a jaw-dropping level of cynicism” by aligning himself with misinformation about COVID-19 vaccines, campaigning against mask mandates and announcing fines for local governments that mandate vaccines for staff.
PUBLIC HEALTH・1 DAY AGO
USA TODAY

Organizers of the rally supporting people charged in the Capitol riot Jan. 6 are urging participants not to wear clothes supporting Trump or Biden.
WASHINGTON, DC・1 DAY AGO