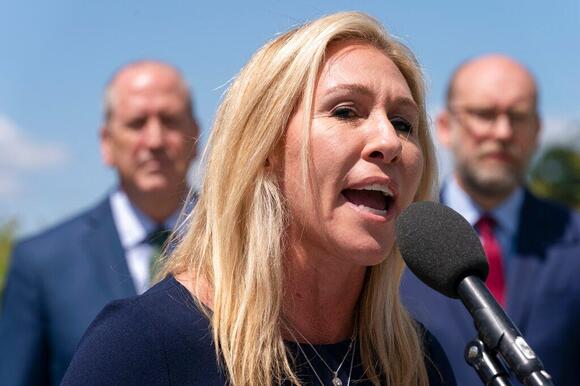 The claim: Rep. Marjorie Taylor Greene said, 'Jesus loves the U.S. most, and that is why the Bible is written in English'

Six months after entering Congress, Rep. Marjorie Taylor Green, R-Ga., is yet again the  subject of a falsely attributed quote on social media.

"'Jesus loves the U.S. most and that is why the Bible is written in English.' – Marjorie Taylor Greene," reads a July 26 Facebook post that has been shared almost 400 times.

There's no evidence Greene ever made this statement. The quote has been around since as early as 2013, USA TODAY found, when it was attributed to then-Rep. Michele Bachmann , R-Minn .

USA TODAY reached out to the poster for comment.

No evidence Greene made statement

USA TODAY found no evidence that Greene said, "Jesus loves the U.S. most and that is why the Bible is written in English."

While Greene has mentioned the Bible on social media, an in-depth search of her Twitter accounts, where she posts almost daily, shows no records of the statement.

Fact check: Doctors' Trial was one of 13 Nuremberg Trials

There was also no sign of the statement on ProPublica's "Politwoops," a website that tracks deleted tweets by public officials.

The only prior reference USA TODAY found online was in 2013 when an image of Bachmann was shared on Reddit with the same caption. It was debunked as there was no evidence the former congresswoman ever said that.

Greene has been the target of misattributed quotes before. In February, USA TODAY debunked a similar Facebook post claiming Greene said, "If English was good enough for Jesus, it's good enough for us."

While the Bible has been translated into hundreds of languages, the original wasn't written in English.

The Greek Orthodox Archdiocese of America says Greek, Hebrew and Aramaic are "the original languages of the Holy Bible from which all the translations have been delivered."

Aramaic was the most common language in much of the Middle East during Jesus' lifetime, while Hebrew had been chosen as the preferred language for religious scholars and scriptures at the time.

The Old Testament is believed to have been written in Hebrew for the most part, with some sections in Aramaic, while the New Testament was written in Greek.

The first instances of English date back to the Fifth Century when three groups of Germanic citizens – the Anglos, Saxons and Jutes – moved to current Great Britain and used Celtic and Latin words to create "Old English."

That timeline puts the creation of English about 200 years after the first official establishment and compilation of biblical texts .

We rate FALSE the claim that Greene said, "Jesus loves the U.S. most and that's why the Bible is written in English." There's no evidence Greene made that statement, which dates back as a spoof quote more than a decade. The congresswoman's communications director says the claim is not true.

I'm truly concerned for Republicans and followers. GOP has forgotten their oaths of office to the country's constitution. My family hasn't been rich or famous, but we believe in God, country & family. Republicans are doing everything to keep their power, rights & positions, but have forgotten they took an oath to protect the rights of all American citizens not just those they agree with. Stop worshipping Trump and kneeling before the golden idol. At least try to get back some of your integrity & self respect. History books will show what has been done & by whom. Whether I agree or not with any politician I do believe Democrats are at trying. Once McConnell stated that at no time would Republicans allow any of Biden’s policies to pass, he told all of America that Republicans would never work with Democrats or the President. McConnell drew a line in the sand. 🇺🇲

Jennifer Strahan wants to do the country a favor. The Georgia businesswoman recently announced that she plans to primary Republican Rep. Marjorie Taylor Greene in Georgia’s 14th Congressional District. Strahan describes herself as a political outsider who supports gun rights, free speech, religious freedom, the police, and the military. She...
CONGRESS & COURTS・2 DAYS AGO
Newsweek

FACT CHECK: No, Tim Tebow Did Not Post This Statement About A ‘Cashless Society’ Being Prophesied In The Bible

An image shared on Facebook claims former NFL player Tim Tebow issued a long statement alleging the Bible predicts the rise of a “cashless society.”. There is no evidence Tebow made this statement. It has circulated online for over a year without attribution. Fact Check:. The message about the Bible...
NFL・1 DAY AGO
TheWrap

Rep. Marjorie Taylor Greene earned some side eye from Steve Bannon when she claimed she’s the is “the most effective member of Congress.”. Speaking to the one-time adviser to former president Donald Trump on his “War Room” podcast, she made the claim that she’s the most effective member of Congress in the current session. Bannon stared straight at the camera, which led to immediate online comparisons to Jim from “The Office.”
CONGRESS & COURTS・4 DAYS AGO

Representative Marjorie Taylor Greene has called for the US government to be shut down, in bizarre comments made during an interview with Steve Bannon.The former political strategist to Donald Trump asked Ms Greene about the Democrat’s $3.5 trillion budget reconciliation bill during an interview for his War Room podcast on Thursday.Mr Bannon asked whether House Republicans had a plan to stop Democrats from passing the bill in the forthcoming weeks, to which Ms Greene replied that she hadn’t heard of any such plan yet. She then continued: "But I’ll tell you what I have to say, Steve: Shut...
CONGRESS & COURTS・4 DAYS AGO
HuffingtonPost

In her first year as a member of the House, Georgia Republican Marjorie Taylor Greene has said a lot of outrageous things. But on Thursday, she said something that even Steve Bannon may have found hard to believe. Greene, who has said she believes in the QAnon conspiracy theory but...
CONGRESS & COURTS・4 DAYS AGO
Daily Mail

US election officials have asked Georgia Rep. Marjorie Taylor Greene to double check her numbers earlier this month after she reported raising more than $3.5 million in campaign contributions so small that she's not required to itemize them. A federal election law aimed at protecting the privacy of small-dollar donors...
ELECTIONS・5 DAYS AGO
Newsweek

Greene has been a staunch supporter of former President Donald Trump's efforts in building a wall along the Southern border and has urged Biden to continue it.
CONGRESS & COURTS・5 DAYS AGO

Businesswoman Jennifer Strahan calls herself a no-nonsense conservative and a political outsider. But as she plans to challenge incumbent U.S. Rep. Marjorie Taylor Greene in next April’s Republican primary, Strahan says that’s not a bad thing for Georgia’s 14th Congressional District. Strahan, the president and CEO of a national healthcare...
CONGRESS & COURTS・5 DAYS AGO
Newsweek

"It is time for the Republican Party to denounce militia-ism," the GOP lawmaker urged.
CONGRESS & COURTS・5 DAYS AGO
Newsweek

Greene is the latest Republican to call for the chairman of the Joint Chiefs of Staff to face a military trial over reports about conversations with a Chinese general.
CONGRESS & COURTS・6 DAYS AGO
allongeorgia.com

Georgia Businesswoman to Challenge Marjorie Taylor Greene in GOP Primary. The U.S. House race in Georgia’s 14th congressional district drew significant attention this week after businesswoman Jennifer Strahan announced she would be facing Marjorie Taylor Greene in the upcoming Republican primary. In announcing her run, Strahan explained: “There is too...
GEORGIA STATE・5 DAYS AGO

The Georgia lawmaker said that her GOP colleagues need to get their "asses in gear" and impeach President Joe Biden to win elections.
CONGRESS & COURTS・11 DAYS AGO
mediaite.com

Congresswoman Marjorie Taylor Greene (R- GA) went on the attack against her own party Friday and accused many Republicans of being so “weak” they could lose support leading into the midterms. Greene, who compared the House mask mandate to Nazi Germany and has pushed vaccine misinformation, tweeted that Republicans should...
CONGRESS & COURTS・11 DAYS AGO
Newsweek

Greene said people have the choice to opt out of medical experiments under the Nuremberg Code, which addressed Nazi war crimes.
PHARMACEUTICALS・12 DAYS AGO
The Independent

Marjorie Taylor Greene faces a $2500 fine for refusing to wear a mask in defiance of a House mandate.Ms Taylor Greene, who is suing over a $500 fine given for not wearing a mask a second time, was among several GOP protesters who spoke out against the mandate reinstated in July by the Office of the Attending Physician.Capitol police chief Thomas Manger ordered officers to report any members of Congress who refuse to wear a mask, warning they could be subject to arrest for unlawful entry under DC Code 22-3302.While Ms Taylor Greene wasn’t cuffed for going maskless, she...
CONGRESS & COURTS・12 DAYS AGO
Newsweek

Feds Ask Marjorie Taylor Greene to Account for Over $3.5M of Unitemized Donations

The Federal Election Commission has given the campaign of Rep. Marjorie Taylor Greene (R-Ga.) until October 12 to provide clarification about $3.5 million in campaign contributions it received during the first half of 2021.
CONGRESS & COURTS・14 DAYS AGO
Daily Herald

Facts Matter: No one's cutting off Biden's mic, and a portion of a video attributed to Pelosi was faked

During a recent congressional hearing on the withdrawal from Afghanistan, Idaho Republican Sen. James Risch used his time for questioning to ask Secretary of State Antony Blinken about a conspiracy theory circulating through conservative media. "It's been widely reported that somebody has the ability to push the button and cut...
CONGRESS & COURTS・3 DAYS AGO
POLITICO

So far, top Republicans are staying quiet about the Sept. 18 protest on the Hill in defense of some Capitol riot defendants.
U.S. POLITICS・8 DAYS AGO
WashingtonExaminer

EXCLUSIVE — Ohio Republican Rep. Bob Gibbs introduced articles of impeachment against President Joe Biden on Tuesday, citing his handling of the U.S.-Mexico border situation, attempt to expand the federal moratorium on evictions, and the withdrawal of U.S. troops from Afghanistan.
CONGRESS & COURTS・15 HOURS AGO