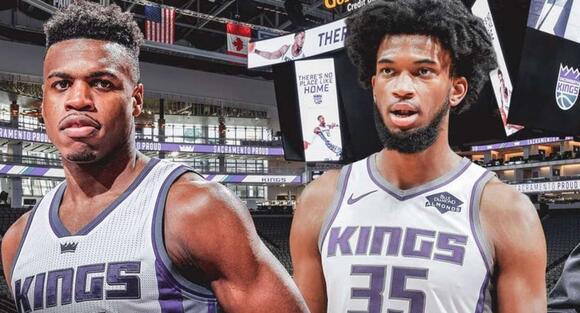 DALLAS - Coming off a heartbreaking first-round series exit at the hands of the LA Clippers, the Dallas Mavericks will look to bolster its supporting cast around Luka Doncic.

In a proposed trade by Bleacher Report's Greg Swartz, the Mavericks would receive Buddy Hield, Marvin Bagley III and the No. 39 overall pick in the 2021 NBA Draft in part of a three-team deal involving the Sacramento Kings and Minnesota Timberwolves.

The other element of this trade would involve Harrison Barnes landing with the Timberwolves while Kristaps Porzingis, Malik Beasley, Jarrett Culver, and a 2025 first-round pick (lottery protected, via DAL) is sent to the Kings.

Buddy Hield is a name that has previously been floated as a logical trade target for the Mavericks. He is a sharpshooter with Dallas connections that is among the highest volume 3-point shooters in the NBA who can hit pull-ups, so the fit next to Luka Doncic is clear.

Taking a chance on a Marvin Bagley III buy-low opportunity could be a bit intriguing. However, there are fundamental flaws in his makeup as a player that would need to be sorted out.

For starters, Bagley III is neither a rim protector nor a versatile defender that can switch or defend out in space. Meanwhile, he isn't a floor spacer offensively and lacks any particular area where he has a trajectory to being very good or elite.

The Mavericks' defensive limitations that are faced with Kristaps Porzingis anchoring the defense would persist without the floor spacing benefit on the other end. That seems like a bad trade-off to make.

Making a trade for Porzingis would make sense for the Kings when considering the could supercharge the team's floor spacing for De'Aaron Fox. Opening up the lane for arguably the NBA's most explosive athlete is always a sound idea.

There would not be a pressing need for Hield either if the Mavericks do bring back Tim Hardaway Jr., or at least land a secondary ball handler like Kyle Lowry. Also, there are `other ways to land Hield in a trade than to involve Porzingis.

While some may want to trade Kristaps Porzingis, moving him for the sake of making a trade is not the right course of action. The Mavericks would need to lose Hardaway Jr. and miss out on all secondary ball-handler targets before entertaining this. Therefore, this is an "idea'' - but one that doesn't fit the Mavs' hints given to us regarding their plan.

The Dallas Mavericks have been looking for a trade partner to unload Kristaps Porzingis on for a few months now. Rumors going back to the NBA Trade Deadline about the Mavericks shopping the Latvian big man, and they have not quieted down since. Dallas tried to do a swap with...
NBA・10 DAYS AGO
AllPacers

On Thursday, Evan Massey of NBA Analysis Network reported that the Indiana Pacers have considered bringing back Lance Stephenson. The Tweet from Massey can be seen in a post that is embedded below. Massey notes that the "first step to adding a new player" is applying for the NBA's Disabled...
NBA・7 DAYS AGO
NBA Analysis Network

This Bulls-Kings Trade Is Focused On DeMar DeRozan

The Chicago Bulls were one of the more active teams during the NBA offseason. They didn’t have a first-round pick in the 2021 NBA Draft, as it was part of their deadline deal with the Orlando Magic to acquire All-Star center Nikola Vucevic. In the second round, the Bulls did...
NBA・13 DAYS AGO
ClutchPoints

Dallas Mavericks star Kristaps Porzingis shared a touching tribute for Los Angeles Lakers forward Carmelo Anthony, whom he idolized and used to play with when they were still with the New York Knicks. On Instagram, Porzingis recalled how he was inspired by the now Lakers star growing up. In fact,...
NBA・10 DAYS AGO

De’Aaron Fox, Tyrese Haliburton, and rookie Davion Mitchell are three key talents in the Sacramento Kings backcourt who they will likely look to build with for the future. Still, the rest of this Kings roster is very uncertain and could result in a trade at some point during the 2021-22 NBA season.
NBA・14 DAYS AGO
FanSided

Should the Sacramento Kings experiment with a three-guard lineup?

With the selection of Davion Mitchell No. 9 overall in July’s NBA Draft, the Sacramento Kings took a logjam of players at the guard positions (De’Aaron Fox, Tyrese Haliburton, Buddy Hield, and Terence Davis) and stuffed it even further. This was a surprise to many, considering most fans had a big guard or wing like Moses Moody at the top of their wish list entering the draft.
NBA・14 DAYS AGO
NBA Analysis Network

This Mavericks-Wizards Trade Is Centered Around Kristaps Porzingis

The Dallas Mavericks have one big question mark looming over the franchise going forward. What will they do with former NBA All-Star Kristaps Porzingis?. The team has fallen woefully short of expectations since they acquired him from the New York Knicks. What was looked at as a lopsided deal in favor of the Mavericks at the time the deal was agreed upon has had the script flipped.
NBA・12 DAYS AGO
Dallas News

Why now is the Mavericks’ time to shock NBA, trade Kristaps Porzingis for Ben Simmons

There was a time when I dispensed sage advice to the Mavericks head coach via my radio platform on a weekly basis. As it turns out, Rick Carlisle is in Indiana and I haven’t had a radio show in over a year, so this seems the best space to present the kind of logic that could elevate the club from its decade-long playoff slump.
NBA・10 DAYS AGO

Miami Heat: Best trade ever done with the Sacramento Kings

The Sixer Sense recently re-vamped a series that plans to recap the best trade they made with teams around the NBA. That sort of content is just a great idea this time of year, why not do it for the Miami Heat?. The Miami Heat have made trades with all...
NBA・11 DAYS AGO
NBA Analysis Network

This is a trade scenario that features NBA teams on two very different sides of the spectrum. The Phoenix Suns are coming off a Western Conference title while the Sacramento Kings have not been to the postseason in 15 years, which is the longest streak in the league. This does not mean that they cannot make a deal.
NBA・11 DAYS AGO
ClutchPoints

Reports reveal that the Philadelphia 76ers will only give up Ben Simmons if the Sacramento Kings offer a trade package that includes De’Aaron Fox or Tyrese Haliburton. The Kings, understandably, will not budge, even for a Ben Simmons trade. They both deem Fox and Haliburton as important pieces to their...
NBA・10 DAYS AGO
ClutchPoints

The Ben Simmons saga continues in Philadelphia as the 76ers thoroughly sift through the trade market in an effort to deal the disgruntled star. Simmons is reportedly hell-bent on leaving Philly for good and has no intention to report to training camp. With the rumors heating up, the Sacramento Kings are apparently among the favorites to land the three-time All-Star.
NBA・10 DAYS AGO

The start of training camp is a little over a week away, and Ben Simmons is still on the Philadelphia 76ers roster. Despite an offseason full of rumors and active trade discussions, a deal has yet to surface for the former number one overall pick. Throughout the summer, multiple teams...
NBA・7 DAYS AGO
chatsports.com

Ben Simmons is still on the market and there hasn’t been much movement in getting a deal done as of late from the Philadelphia 76ers. Like when FanSided’s Swarm and Sting came up with potential trades for Simmons, I will also be grading proposed Simmons deals from Austin Carroll of A Royal Pain.
NBA・5 DAYS AGO
Omaha.com

Nebraska men’s basketball recruiting coordinator Shannan Lum is leaving Lincoln for an opportunity with the Dallas Mavericks. Lum, who was hired by the Huskers in May, was the first woman of Asian American or Pacific Islander descent to hold a recruiting coordinator position in men’s college basketball. Now she will be a “special assistant” on Mavericks coach Jason Kidd’s staff.
NEBRASKA STATE・14 DAYS AGO
Yardbarker

Much like your favorite holiday get-togethers, Sports Illustrated's annual top-100 list invokes genuine discourse with a touch of disdain. While the 2020-21 season wasn't a star-level campaign from Kristaps Porzingis, Sports Illustrated still found a spot for him on its famous list. Porzingis averaged 20 points and 10 rebounds during...
NBA・3 DAYS AGO
State Hornet

A lot can happen in 15 years. Over the past decade and a half, we’ve had four presidents, the birth of the Marvel Cinematic Universe and even a pandemic. The world moves fast. Everything you thought couldn’t happen one day can,—except the NBA playoffs in Sacramento. The last time the...
NBA・2 DAYS AGO
Mavs Moneyball

Basketball starts really soon. Most of you know that, after all you’re reading a basketball site right in the early prime of football season. And yet, here I am on a Tuesday night, writing about what’s to come. So here’s what’s coming up: Media Day is Monday the 27th with...
NBA・2 DAYS AGO
Yardbarker

Rewind to 2017; the NBA was a completely different landscape. The Golden State Warriors were an active juggernaut of the league; LeBron James wasn't a Los Angeles Laker. In 2017, Dennis Smith Jr and Frank Ntilikina were top-10 picks in the NBA Draft. Fast forward to the present time, and both are on drastically different career paths.
NBA・1 DAY AGO
Larry Brown Sports

After the exits of GM Donnie Nelson and coach Rick Carlisle earlier this offseason, the Dallas Mavericks are seeing another high-profile departure. Brad Townsend of the Dallas Morning News reported Thursday that the Mavs have parted ways with controversial executive Haralabos “Bob” Voulgaris. The move was not a firing however, Townsend adds. Voulgaris’ contract simply expired and was not renewed by new GM Nico Harrison.
NBA・21 HOURS AGO