CNN's Cuomo tells restaurant owner: 'You sound like an idiot' for denying service to vaccinated customers 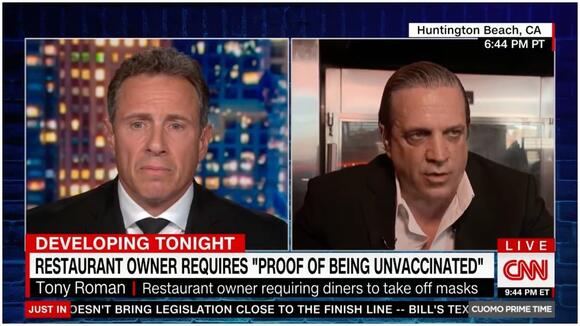 CNN host Chris Cuomo conducted a testy interview with a California restaurant owner who is requesting customers prove they are not vaccinated, an exchange that ended with the host telling the business man he sounds "like an idiot."

"This is not an anti-vaccine stand, it's a pro-freedom stand," Tony Roman, who owns and operates Basilico’s in Huntington Beach, told Cuomo on Wednesday night. "That's what you're not getting."

Cuomo asked Roman, "what is the difference when you are ignoring the science that says when you get vaccinated you protect yourself you protect the people around you and you help us get out of this pandemic?"

Roman rejected Cuomo's assertion and deflected, asking him "why did you leave your house when you had COVID? It has been documented."

"The science is clear. I don't want you to get sick ," Cuomo told Roman, suggesting he had hoped the refusal was part of a "publicity stunt."

"All of a sudden you care about me," Roman mocked Cuomo. "Maybe we should ask your brother about protecting people," he said, referring to New York Gov. Andrew Cuomo (D), who was embroiled last year in a scandal involving nursing homes and coronavirus-infected patients.

"I made my case and you didn't have much to say," Roman scoffed at the host.

"Honestly, you sound like an idiot, so there's not much to say," Cuomo said.

"And so do you," Roman responded.

"Only for having you on the show," Cuomo laughed. "That was my only mistake."

Big thumbs up for you Tony. You should reserve the right to refuse service to anyone for any reason you may see fit. Awesome you'll have my support no matter what buddy.

thanks for having guts to speak your heart. they care less what happens to us. it's about control. praying their evil plans are exposed

Former New York Gov. Andrew Cuomo is speaking out following a report that he left his dog, Captain, behind at the executive mansion after he moved out and asked if any of his staffers wanted to keep the pup. "Some people just can’t get the facts straight," Cuomo wrote on...
PETS・25 DAYS AGO
Vice

Want the best of VICE News straight to your inbox? Sign up here. A local Republican Party official in South Carolina died of COVID-19 Thursday, after spending nearly three weeks in the ICU during which he posted misinformation about vaccines and called coronavirus “a deadly bio-weapon.”. Both 64-year-old Pressley Stutts...
U.S. POLITICS・29 DAYS AGO
mediaite.com

Fox and Friends‘ Ainsley Earhardt interviewed Arizona Sheriff Mark Lamb about his promise not to mandate vaccines, which she and Lamb claimed “went viral” with over 65,000 video views on Facebook. The video in question features Lamb delivering a dopey update to followers of the Pinal County Sheriff’s Office Facebook...
PINAL COUNTY, AZ・23 DAYS AGO
checkyourfact.com

An image shared on Facebook allegedly shows a Chinese restaurant sign saying “F*** DeSantis” and offering a discount for customers with proof of vaccination. The sign, which is fake, comes from a sign generator website that allows users to customize the name of the Chinese restaurant and its message. Fact...
RESTAURANTS・8 DAYS AGO

Man in Larry Elder Ad Tells Gavin Newsom: ‘You Remind Me of the Guy in High School Who Took My Girlfriend’

On Tuesday, voters in California will decide whether to recall Democratic Gov. Gavin Newsom. Recent polling indicates a majority will vote “no” on the recall, though the margins are too close for the governor’s comfort. In the event a majority votes “yes,” the winner will be chosen from a slate of candidates on the ballot. The winning candidate need only receive a plurality of votes to win.
POLITICS・9 DAYS AGO
WKRC

A diner in Florida is causing quite the stir over a sign posted on its door, according to a report by FOX 35. The DeBary Diner in DeBary, Florida had a sign on the front door that read: "If you voted for and continue to support and stand behind the worthless, inept and corrupt administration currently inhabiting the White House that is complicit in the death of our servicemen and women in Afghanistan, please take your business elsewhere."
RESTAURANTS・16 DAYS AGO
Shore News Network

On her first day in office, Governor Kathy Hochul announced a new, comprehensive plan to help ensure a safe, productive return to schools this fall in the midst of rising COVID-19 numbers fueled by the Delta variant. As part of this plan, Governor Hochul has directed the New York State Department of Health to institute a universal mask requirement in all schools, public and private, as determined necessary at the discretion of the Commissioner. The Department of Health will issue the requirement through regulatory action established by the Public Health and Health Planning Council.
NEW YORK CITY, NY・4 DAYS AGO
CBS New York

NEW YORK (CBSNewYork) — Former Gov. Andrew Cuomo will be able to keep the $5.1 million he made from his memoir on the COVID-19 pandemic. The state’s ethics agency made the decision Tuesday. TIMELINE: New York Gov. Andrew Cuomo Resigns In Wake Of Sexual Harassment, Nursing Home Scandals Among the six members who voted in Cuomo’s favor is a former Suffolk County district administrative judge, who Gov. Kathy Hochul chose for the panel.
NEW YORK CITY, NY・3 DAYS AGO

The disgraced doctor, Steven Arthur LaTulippe, also spoke publicly against mask-wearing in a Stop the Steal rally in support of Donald Trump. Imagine knowing better and choosing not to do better. A doctor with his own family practice in Oregon was charged with spreading misinformation about the coronavirus, including telling patients that masks caused carbon dioxide poisoning and instructing patients to remove them, Newsweek reports.
U.S. POLITICS・1 DAY AGO
WashingtonExaminer

A federal judge has ordered the Biden administration not to use its public health authority to turn away any migrant families who illegally cross the southern border into the United States, an abandonment of U.S. policy in effect since the start of the coronavirus pandemic.
U.S. POLITICS・2 DAYS AGO
Fox News

MSNBC host Joy Reid became the focus of intense criticism Wednesday over a bizarre rant that Republicans loved the coronavirus, wanted it pumping through their veins, and they were a "creepy little COVID-loving death cult." "OK, we get it! COVID is the precious and you love it. You love COVID...
PUBLIC HEALTH・2 DAYS AGO

Did Cuomo's ouster show the #MeToo movement was co-opted?

Firings and resignations among leaders of women's movement caught in New York Gov. Andrew Cuomo's orbit raises questions about the progress of the #MeToo movement, nearly four years since the hashtag went viral in 2017. Judy Woodruff discusses with Dani Ayers, CEO of #MeToo International, and journalist Lin Farley, who is credited with coining the term "sexual harassment" in the 1970's.
POLITICS・10 DAYS AGO
Forward

(JTA) — (New York Jewish Week via JTA) — New York City Mayor Bill de Blasio announced last month that beginning Sept. 13, restaurants would have to ask customers for proof that they received at least one dose of a COVID-19 vaccine in order for them to dine indoors or else be fined.
NEW YORK CITY, NY・5 DAYS AGO
mediaite.com

A reporter asked White House Press Secretary Jen Psaki on Friday if the United States is “too privileged,” given there are those in the country who refuse to take a coronavirus vaccine despite there being no shortage, while there is limited availability of shots in Africa. During Friday’s White House...
U.S. POLITICS・7 DAYS AGO
mediaite.com

Alphonso David, former president of the Human Rights Campaign, defended his conduct in an interview after being fired from the organization over his connection to Andrew Cuomo’s sexual harassment scandal. When New York Attorney General Letitia James released her explosive report on Cuomo’s alleged conduct as New York governor, her...
PRESIDENTIAL ELECTION・6 DAYS AGO

Journalist Katty Kay told Dr. Anthony Fauci Tuesday she found it "crazy" she could travel in the U.S. without having to show proof she had received the coronavirus vaccine. Kay, who frequently appears on MSNBC, asked Fauci on "Morning Joe" if the government would start requiring travelers to show their vaccine cards, noting it was already "common practice" in Europe.
TRAVEL・4 DAYS AGO
ABCNY

The city's mandate is now on hold until the two sides can go to court on September 22, five days before the mandate is slated to take effect.
NEW YORK CITY, NY・3 DAYS AGO
New York Post

The owner of a popular Manhattan restaurant on Friday blasted the three Texas women charged with attacking the eatery’s hostess for demanding to see proof they were vaccinated against COVID-19 — as one of the tourists claimed she’s “100 percent innocent.”. “Clearly somebody’s off. It makes no sense,” said Jeffrey...
MANHATTAN, NY・1 DAY AGO
Insider

Mayor London Breed, who has promoted COVID-19 mandates, was spotted without a mask at the Black Cat nightclub on Wednesday.
SAN FRANCISCO, CA・1 DAY AGO