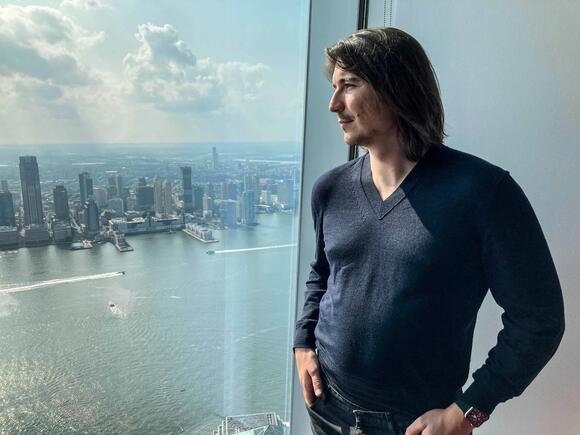 "I think what's interesting with what we've seen in retail investing over the past year is that a lot of these companies have been hit hard by the pandemic, right?," including airlines, retailers, and movie chains, said Tenev in an interview on CNBC before the online brokerage's own stock began trading.

"[You] have the institutions that are basically writing these companies off and then retail investors coming in and keeping them up and supporting them."

Video game retailer GameStop and movie theater chain AMC Entertainment have become popular stocks among retail traders active on Reddit and Twitter. Tenev's firm has been a force behind the retail trader movement, with millions of new investors funding accounts on the app during the pandemic.

There are "customers that love these companies they want them to thrive. And you're seeing [companies] also get resources that allow them to hire really good management teams, in some cases, and then build for the future," Tenev said.

AMC, the world's largest movie-theater operator, has taken advantage of the rally in its shares this year, saying in June it had raised about $1.25 billion through selling shares during the second quarter and the funds would strengthen its balance sheet.

"I don't know if people have understood the ramifications of what high retail participation in the markets means but I think fundamentally it's a very good thing and we're excited to be a part of it," said Tenev.

Robinhood's shares slumped 8.4% to $34.82 in their trading debut, finishing below the IPO price of $38. The company set aside up to 35% of its IPO shares to individual investors.

Robinhood angered many of its customers earlier this year when the trading app halted buying of GameStop, AMC, and other meme stocks during a stunning rally. Robinhood had pledged to earn back the trust of those customers . The company has more than 18 million accounts and 17.7 million active monthly users.

According to Goldman Sachs , retail investors have been on track to put $400 billion into the stock market in 2021.

Potential trillion-dollar stocks can make you filthy rich, but how to find them? Do this. Spot megatrends and find companies already making waves. Clean energy, e-commerce, fintech, gaming, and software are some worth a look. Stocks with game-changing growth potential can grow exponentially in a matter of years, but among...
STOCKS・1 DAY AGO
The Motley Fool

These innovative stocks have been hit by short-term concerns, yet their outlooks remain as bright as ever. For nearly 18 months, investors have enjoyed a historic bounce-back rally in the stock market. After losing 34% in roughly a month during the first quarter of 2020, the benchmark S&P 500 has since doubled in value.
MARKETS・13 HOURS AGO
5NEWS

Short-term volatility creates buying opportunities for long-term investors. Coupa Software has built a strong moat around its business. This stock has the potential to grow tenfold in the next decade for two key reasons. Growth stocks tend to be volatile investments, and the market often overreacts to both their good...
STOCKS・1 DAY AGO

Should You Be Worried About a Stock Market Crash? Here’s What the Data Suggests

Over the past 19 months, investors have witnessed history on both ends of the spectrum. They’ve navigated their way through the quickest decline of at least 30% in the history of the storied S&P 500 (SNPINDEX: ^GSPC), and they’ve subsequently reveled in the strongest bounce-back rally from a bear market bottom of all time. Since bottoming out on March 23, 2020, the benchmark index has more than doubled in value.
STOCKS・1 DAY AGO
centralrecorder.com

THE Shiba Inu coin has spiked up in value as its rival DogeCoin drops. The value of the Shiba Inu coin has risen 21.3 percent this week and 21.1% in the last 24 hours. Meanwhile, the “meme” Dogecoin has gone down 5.8 percent over the last week. However, Dogecoin is...
COMMODITIES & FUTURE・1 DAY AGO
dailyhodl.com

Bram Berkowitz mainly writes in the financials bureau covering the banking sector. Prior to The Motley Fool, he wrote about and covered community and regional banks in New England for The Warren Group. Amazon has never looked stronger, and it's built to win the future. U.S. Bancorp survived Berkshire Hathaway's...
STOCKS・2 DAYS AGO
The Motley Fool

The company is securing partners to join its marketplace. This rapidly growing company is also winning in the battle for workers. The company's success is no secret to the market, which has responded by bidding up the stock price. DoorDash (NYSE:DASH) stock has been on fire lately. It's up 32%...
STOCKS・1 DAY AGO
MarketWatch

Inflation is unsettling some investors, even if it does prove a transitory feature of the pandemic.
BUSINESS・1 DAY AGO
MarketWatch

Fake news appeared to be giving holders of virtual currencies very real agita on Monday, as a hoax news release sent litecoin briefly soaring before crumbling back down to Earth.
MARKETS・1 DAY AGO

If you want to hear an optimistic outlook for the stock market right now, don't ask investors. Investors' expectations that stock prices will rise over the next six months dropped 16.4 percentage points this week to 22.4%. That's the lowest level of bullish sentiment since the heart of the pandemic in July 2020 and far below the historical average low of 28%, according to the latest American Association of Individual Investors (AAII) sentiment survey.
STOCKS・2 DAYS AGO
The Motley Fool

McDonald's and Walmart have proved they can thrive through most selling environments. Their stocks haven't participated in 2021's rally. Their dividend payments will help cushion investors' returns during market pullbacks. There's never a shortage of confident-sounding predictions about what's coming up for Wall Street, but no one ever knows for...
STOCKS・1 DAY AGO
MarketWatch

Costco’s stock set up to fall after earnings, and that’s the time to buy it, analyst says

Shares of Costco Wholesale Corp. are likely to dip after the membership-based warehouse retail giant reports earnings, but that when investors should buy, said long-time bullish analyst Rupesh Parikh at Oppenheimer.
RETAIL・1 DAY AGO
The Motley Fool

Is It Safe to Invest in the Stock Market Right Now?

The stock market has experienced a phenomenal year, but some people worry a correction is coming. Market downturns are normal, but they can still be alarming. With the right strategy, you can help your investments survive market volatility. Investing in the stock market can be intimidating, especially during periods of...
STOCKS・2 DAYS AGO
protocol.com

Amazon has banned a total of approximately 600 Chinese third-party brands and 3,000 related third-party seller accounts in a crackdown this year, Cindy Tai, the company's Vice President of Asia Global Selling, told Chinese media on Friday. Tai made the comments at a local event in Hangzhou, China where Amazon...
BUSINESS・2 DAYS AGO
stockxpo.com

Do You Understand the Differences Between the Stock Exchanges?

On May 17, 1792, two dozen stockbrokers and merchants sat under a buttonwood tree on Wall Street in New York City and signed what is probably the most important financial document in American history....
MARKETS・1 DAY AGO
GOBankingRates

Crypto and 5 Other Groundbreaking Investing Trends for Gen Z

Generation Z is loosely defined as those ages 24 and under. As most of this generation is either just finishing up school or working in their first jobs, they may not have extensive investment...
MARKETS・1 DAY AGO