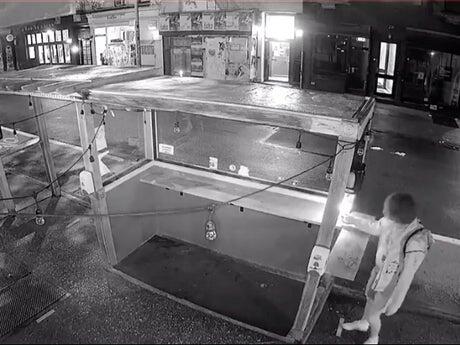 Ganzer, who was once named a Food & Wine Magazine “sommelier of the year, ” is a partner at the popular La Compagnie des Vins Surnaturels wine bar on the Lower East Side, making his misdeeds all the more unsettling: Surveillance footage captured the Ganzer lighting at least two other Downtown restaurants ’ sidewalk dining structures on fire this past year. It’s unclear what Ganzer’s motives were for starting the fires, though some outlets report that Ganzer targeted “rival restaurants.”

In January, Ganzer sparked a fire outside Forsythia restaurant on Stanton Street, doing the same at Prince Street Pizza on July 13. Ganzer was also charged with inciting a trash fire on Broome and Centre Street in June. All are within a few blocks from La Compagnie des Vins Surnaturels, which has since issued a statement: “We as the company are aware of the incident, and Mr. Ganzer is on a leave of absence.” They had no further comment.

Both Forsythia’s and Prince Street Pizza’s dining structures were damaged — Forsythia’s much more so — but no diners were hurt. Still Daniel Nigro, the fire commissioner, made sure to reiterate that “every act of arson has the potential to spread rapidly, endangering the lives of New Yorkers.”

Outdoor dining structures have popped up all over New York City amid the pandemic, allowing diners to continue to eat out but in the open air. Thus, the wooden sheds have been a saving grace for establishments, especially those in Manhattan where restaurants have so little space with which to work as is.

When selected as a sommelier of the year, Ganzer told Food & Wine Magazine that, “New York is one of those places where the longer you’re here, the more you carve out your own niche, and the more you want to make that niche bigger. New York’s become home.”

In a more recent interview , Ganzer discussed the “roller coaster” that is trying to run a restaurant amid Covid-19. “There were so many different waves of emotion; in the very beginning, there was denial, bordering on feeling personally attacked, because no other industry was hit as hard,” he said, also calling the experience “sort of existentially crippling.”

He also specifically noted that he would be investing in an outdoor dining space for the bar, noting that’s where his “optimism lies.”

“Post-winter, people are going to be wanting to get out a little bit more. We’re definitely going to invest in some more outdoor dining space, and open it earlier when we have more sunshine, and probably closing a little bit earlier,” he told Sommelier Business . “The weather’s going to help people just want to move around a little bit more.”

A man dining outside of an upscale Chinese restaurant in Manhattan on Wednesday night was shot in the leg as he tried to fight off a pair of armed robbers, police and witnesses said. The chaotic scene outside of Philippe Chow on East 60th Street near Madison Avenue unfolded when...
MANHATTAN, NY・1 DAY AGO
News 12

Outdoor dining has been in place since mid-2020 and DOT is currently working to make changes within the program so that it can be permanent by 2023.
BROOKLYN, NY・18 HOURS AGO
bkreader.com

A group of Bed-Stuy restaurant owners are calling for the community’s support in their push to get the City to establish a permanent and equitable outdoor dining program. Charlotta Janssen, the owner of Malcolm X Blvd’s Chez Oskar, has worked tirelessly throughout the pandemic to ensure local restaurants have been able to survive, organizing and informing small business owners of ever-changing rules and lobbying local leaders for support.
RESTAURANTS・6 DAYS AGO
CBS New York

NEW YORK (CBSNewYork) — The search is on for the suspects behind a shooting that started with a robbery at a popular Upper East Side restaurant. The restaurant, Philippe on East 60th Street and Madison Avenue, had been closed since Wednesday night when the shooting terrified diners and neighbors, CBS2’s Jenna DeAngelis reported Thursday. Police said it started when two suspects approached people in the restaurant’s outdoor dining section. “I came home probably about five minutes before it happened,” one neighbor told CBS2. The woman said she heard a loud bang after 10 p.m. but didn’t think it was gunshots. “It sounded like somebody dropping...
UPPER EAST SIDE, NY・2 HOURS AGO

“This fire not only affected our family, but also all of the Indonesian community in Washington. Everybody is so sad,” the owners of one of the businesses said.
EDMONDS, WA・1 DAY AGO
spartanburg.com

Spartanburg Restaurants That Are Open for Takeout, Dine-in, and Outdoor Service

Support Spartanburg restaurants. We’re all in this together, and local restaurants still need your support. Restaurants in South Carolina have been allowed to reopen for dine-in guests as of May 22, 2020. The state-mandated occupancy limit was lifted on October 2, 2020. Because COVID-19 is affecting the restaurant industry in...
SPARTANBURG, SC・14 DAYS AGO
Santa Monica Daily Press

A West Hills man who started a fire that caused substantial damage to a Santa Monica restaurant during the civil disturbances that erupted during the spring of 2020 pleaded guilty Thursday to a federal criminal charge. Micah Tillmon, 20, pleaded guilty to one count of possession of an unregistered destructive...
SANTA MONICA, CA・13 DAYS AGO
mauinow.com

Outdoor dining options kept many Twin Cities restaurants alive during COVID-19 restrictions last winter — and now the industry is revisiting whether to keep the patio tents and al fresco fixtures around. Why it matters: The approaching cold weather combined with concerns over the Delta variant's spread have restaurant owners...
RESTAURANTS・1 DAY AGO
CBS Baltimore

BALTIMORE (WJZ) — According to Yelp, Baltimore is home to one of the best bourbon bars in the country. In celebration of National Bourbon Heritage Month, which is September, the popular review and travel website ranked the 20 top bourbon bars in the country, and threw in five Canadian bars too. Barfly’s is a laid-back bar in the Riverside neighborhood boasting over 650 whiskeys, bourbon and scotches, according to the business’s website. The bar ranked 19 on Yelps list of spots to visit. If you’re feeling hungry, the bar also serves pizza. Yelp picked the bars based on reviews, and Barfly’s sits alongside spots in New York City, Seattle and of the titan of bourbon production, Kentucky.
BALTIMORE, MD・1 DAY AGO
moreclaremore.com

Dutch Bros Coffee, a leader in the drive-thru coffee category, is coming to Claremore! Dutch Bros was founded in 1992 when two real-life bros bought a double-head espresso machine, cranked up the stereo and started experimenting with 100 pounds of coffee beans. What can customers expect from their local Dutch...
CLAREMORE, OK・2 DAYS AGO

In a viral video posted Aug. 11, TikToker @dogmom1991m films two white women who allegedly called the police and her because she took her pit bull to the park. “These ladies called the cops on me for having a pit bull at the park around kids,” the video caption says. “I was minding my own business; he was on a leash.”
PETS・1 DAY AGO
Secret LA

Rent this 22-story reflective monolithic skyscraper—on its side. The Invisible House in Joshua Tree looks like a skyscraper that has been airlifted from Manhattan and planted on its side in the middle of stunning scenery. It has sustainability built into the entire design with a mirrored exterior that makes this jaw-dropping structure blend in seamlessly with the surroundings while providing complete privacy and refracting the harsh desert sun to keep the interior cool.
JOSHUA TREE, CA・22 HOURS AGO
The Independent

A woman has given an honest tour of her New York City apartment, describing what it is like to live on the Upper East Side of Manhattan when you are “not a squillionaire”.Taryn Delanie, who goes by the username @taryntino21 on TikTok, shared the candid review of her apartment in July, in which she revealed that some of the realities of living in her Upper East Side home are unusable cabinets and slow water heaters.“What it’s like to live on the fabulous Upper East Side when you’re not a squillionaire,” Delanie began the video, which she set to the opening...
BEHIND VIRAL VIDEOS・2 DAYS AGO
Sacramento Bee

Racism forced a family from its home. Now the place is West Sacramento’s hottest cafe

The figs are ripening in Tree House Cafe’s backyard, ready for chef E.B. Shin to blend into a barbecue sauce. Fuyu persimmons will be used in a curry, while their hachiya cousins will find homes in cookies, owner Jeff “Fro” Davis said. In about a month, two enormous pomegranate trees...
WEST SACRAMENTO, CA・8 DAYS AGO
Bon Appétit

3 Celebrity Wines That Are Actually Good, According to a Sommelier

All products featured on Bon Appétit are independently selected by our editors. However, when you buy something through our retail links, we may earn an affiliate commission. Can you even call yourself a celebrity these days if you don’t have your own wine label? From Bon Jovi’s Hampton Water rosé to Boyz II Men’s Harmony label, musicians, athletes, and actors are slapping their names on bottles faster than you can say, “Although we’ve come to the end of the road, still I can’t let go.” But are any of these celebrity wines actually worth buying? Much of that has to do with which winemaker the celeb chooses to partner with, because we’re pretty sure Cameron Diaz is not determining which pruning techniques to employ for her “clean” vegan wine brand. When the juice is good—as in the case of designer Rosie Assoulin’s Vivanterre wines, which are produced by natural wine heavy hitters Patrick Bouju and Justine Loiseau—it’s because the A-lister lending their name to the brand has had the good sense to tap a legit expert. Below, sommelier André Mack weighs in on three celebrity wines that deserve a spot on your table—and for his dunks on the bottles that didn’t make the cut (sorry, Snoop), watch the full video below.
DRINKS・14 DAYS AGO
wineindustryadvisor.com

Educational yet entertaining, these wine gift kits bring California wine country to your doorstep. With 5 award-winning Rhône blends, tasting cards, and a one-on one guided tasting, it’s the gift they’ll really, truly savor this year. ONX has worked with over 200 company groups to provide wine tasting kits for...
DRINKS・2 DAYS AGO
News 12

Outdoor dining in Riverhead could soon be permanent. In July, the town board approved an extension for outdoor dining until Sept. 30. Restaurant owners like Robert Pollifrone are anxiously anticipating the Riverhead Town Board making outdoor dining a thing of the future. “There are some people who just won’t eat...
RIVERHEAD, NY・9 DAYS AGO
CBS New York

NEW YORK (CBSNewYork) — Police have released a photo of man they’re searching for in the deadly shooting of a pregnant woman in Harlem. Shanice Young, 31, was gunned down early Sunday morning outside her building on West 128th Street at Frederick Douglass Boulevard. Neighbors told CBS2 she had just returned from her baby shower and was bringing her gifts inside with her boyfriend and family when a gunman shot her in the head. Police sources said Young was trying to break up a fight before the shots were fired. (Credit: NYPD) Her sister said she left behind two daughters and was nine months pregnant. Late Sunday night, police told CBS2 they were searching for Young’s ex-boyfriend in the investigation. They’re now asking for the public’s help locating 40-year-old Justin Soriano. Anyone with information about the shooting or Soriano’s whereabouts is asked to call the NYPD’s Crime Stoppers Hotline at 1-800-577-8477 or for Spanish, 1-888-577-4782. Tips can also be sent to the NYPDTips Twitter account or submitted online at NYPDCrimeStoppers.com.
NEW YORK CITY, NY・2 DAYS AGO