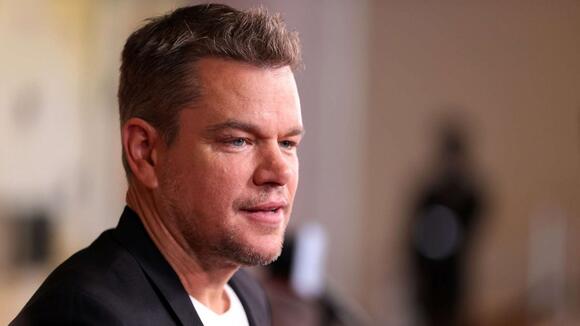 Matt Damon has finally confirmed what everybody has pretty much known for a while now -- he'll be reprising his role as "actor Loki" from "Thor: Ragnarok" in the Marvel franchise's upcoming fourth installment, "Thor: Love and Thunder."

"I don't know if it's secret or not, though everybody knows. I went down [to Australia] to shoot, and I think they sussed out, 'cause paparazzi took pictures of us, so that they sussed out what we were doing,” he said on SirusXM's " The Jess Cagle Show ."

"We were kind of reprising a cameo that Luke Hemsworth [brother of "Thor" actor Chris Hemsworth] and I did in the last one," Damon explained. "And we had a ball, and so ["Love and Thunder" director Taika Waititi] had us back again to kind of run that joke back and upgrade it a little bit."

Damon also weighed in with his thoughts on Bennifer 2.0.

When asked if he was happy about longtime pal Ben Affleck rekindling his romance with Jennifer Lopez, he joked, "How else would I be? Like, would I be unhappy?"

"Like, I hate true love. It sucks. Yeah. Yeah. I wish them nothing, but you know, hardship," Damon added jokingly.

Who Is Matt Damon’s Wife?

There was once a point when Matt Damon was one of the most eligible bachelors in Hollywood. The Good Will Hunting star who exploded onto the Hollywood scene with fellow bachelor and best friend, Ben Affleck, had the good looks and down-to-earth personality that many in the celebrity world would find too good to be true within their crazy society fueled by ego, glitz, and glamour. So based on that, it would be natural to assume that Damon eventually ended up with a fellow celebrity or some big-name businesswoman. But that actually couldn’t be further from the truth. So who is Matt Damon’s wife?
CELEBRITIES・12 DAYS AGO
MovieWeb

Chris Hemsworth Shares the Secret Behind His Massive Arms in Thor: Love and Thunder

Want arms like Thor: Love and Thunder star Chris Hemsworth? Well, it is going to hurt, as demonstrated by a workout video shared recently by the actor himself. Hemsworth has taken to social media to share an extensive clip of an intense arm workout he used to produce Thor's beastly set of guns and pythons, and frankly it looks like agony.
CELEBRITIES・9 DAYS AGO
IBTimes

Fans of the late singer Whitney Houston are furious following news her 1992 movie “The Bodyguard” will be the latest Hollywood film to get a modern-day remake. Houston and Kevin Costner starred in the original movie, which had several hit songs and is considered the bestselling movie soundtrack of all time.
MOVIES・1 DAY AGO
thedigitalfix.com

Have you ever wondered how Tom Cruise gets away with doing all of the bonkers stunts he pulls? I mean, speaking like an accountant for a second, he’s one of the biggest stars in the world, which makes him incredibly valuable, yet for some reason, he’s allowed to do his own stunts. Surely this would make him an actuary’s worst nightmare?
CELEBRITIES・14 DAYS AGO

It was a fun-filled night for Jennifer Lopez, Ben Affleck and Matt Damon. Besties Affleck and Damon celebrated the premiere of their new film, The Last Duel, at the Venice Film Festival on Friday, with their special ladies by their side. Photographer Greg Williams captured candid and behind the scenes moments as they all enjoyed the night's event.
CELEBRITIES・5 DAYS AGO
Rottentomatoes.com

Why would we do something so cruel as pit two of the nicest guys in Hollywood – and real-life besties – against each other? Because that’s kinda the whole idea of this show! And so it is that one-time scrappy up-and-comers and nowadays A-list superstars Matt Damon and Ben Affleck must face off, Batman-vs-Superman style, to the death. Well, until Vs. host Mark Ellis declares one the victor, at least. In this episode, the two actors duke it out over five categories – box office performance, Tomatometer and Audience Scores, most iconic moments, best characters, and a wild card round – before Ellis decides which of these apples he most likes. Will it be the man who refused to let a little thing like his Daredevil flop stop him from re-entering the superhero genre? Or the guy who gave us a new kind of super-spy in Jason Bourne… and said yes to Downsizing? Tune in to find out.
CELEBRITIES・3 DAYS AGO
MovieWeb

Thor: Love and Thunder Training Has Changed Natalie Portman: It's So Wild to Feel Strong

With many Marvel fans currently occupied with the release of Shang-Chi and the Legend of The Ten Rings, that Spider-Man: No Way Home trailer and what it all means for Doctor Strange in The Multiverse of Madness, it has been a while since we heard anything new about the other movie that has already wrapped filming and arrives next year: Thor: Love and Thunder. With the movie bringing in the Guardians of The Galaxy, and seeing the once unthinkable return of Natalie Portman as Jane Foster, the fourth solo outing for the God of Thunder is set to be something pretty big. And it isn't the only thing that is coming packed, because Natalie Portman had to go through some rigorous training to get in shape for her Marvel return as she revealed in a recent interview.
MOVIES・13 DAYS AGO
wegotthiscovered.com

Many movie fans know of Chris Hemsworth for his many appearances as the iconic Marvel superhero Thor, however, according to a recent report, the star actor is being considered to take up a role within the other comic-book film Goliath — DC. According to a report by Giant Freakin Robot,...
MOVIES・2 DAYS AGO

Matt Damon has a tattoo in honor of Heath Ledger

The actor has engraved on his arm the same tattoo that his deceased friend had. Matt Damon has the same tattoo engraved on his arm as his late friend Heath Ledger. The two actors met in 2005 on the set of the film “The Brothers Grimm and the Enchanting Witch”. A few years later, Matt tracked down Heath’s tattoo artist and asked him to replicate the same ink that the Australian star possessed, which is a “strange curved line”.
CELEBRITIES・7 DAYS AGO
940wfaw.com

IS SHAILENE WOODLY A MOM?: Is Shailene Woodley the latest Hollywood celeb to reveal big baby news? The Big Little Lies actress got fans buzzing on Wednesday (Sept. 8th) when she posted a black and white photo of some seriously cute baby feet on her Instagram Story. Fans immediately jumped to conclusions about Woodley and her fiancé Aaron Rodgers with one Twitter user writing, “IS SHE A MOM? IS THAT A RANDOM BABY? WHO IS THAT? DID SHAILENE WOODLEY HAD A BABY AND NO ONE KNEW? I NEED SOME INFORMATION HERE.”
CELEBRITIES・7 DAYS AGO
People

Matt Damon is keeping a low profile on social media. The Stillwater actor, 50, doesn't have any public social media pages but recently revealed in GQ's October cover story that he does have "a very private Instagram account" he mainly uses to keep up with close friends. "I have 76...
INTERNET・7 DAYS AGO
d1softballnews.com

About ten years ago The Stillwater Girl, directed by Tom McCarthy (Oscar winner for Spotlight) and presented out of competition at the Cannes Film Festival, it should have been a film nourished by the Mediterranean noirs of writers such as Andrea Camilleri, Massimo Carlotto and Jean-Claude Izzo, the latter author of a trilogy set just in Marseille, a city that the director considered the perfect location for a not entirely convincing story. The meeting with two French screenwriters, Thomas Bidegain and Noé Debré, reflections on the collapse of American moral authority during the Trump administration, the fascination with the court case of Amanda Knox, accused in 2007 in Italy of the crime of Meredith Kercher, and the collaboration of Matt Damon allowed him to give body and soul to a film that Universal will distribute in Italian cinemas today, 9 September.
MOVIES・8 DAYS AGO

The Battle of the Chrises is an ongoing Hollywood debate that involves many famous men named Chris. Typically, a good Chris-off includes Chris Evans, Chris Hemsworth, Chris Pine, and Chris Pratt. Well, thanks to an innovative TikTok user, you no longer have to choose between at least two of the stars. Hemsworth and Evans, who are known for playing Thor and Captain America in the Marvel Cinematic Universe, have been mushed together on the social media app by user @nat21hi. Warning: Handsome Alert!
BEHIND VIRAL VIDEOS・1 DAY AGO
Washington Examiner

From the streets of Boston to the beaches of Normandy, from the body of an amnesiac assassin to the sands of Mars, Matt Damon has had one of the most wide-ranging acting careers of any movie star of our time. In his latest film, Stillwater, from director Tom McCarthy, who won an Oscar for best picture for 2015’s Spotlight, the preternaturally popular actor has set his sights on the American heartland, only to wind up back on the beaches of Europe.
CELEBRITIES・17 HOURS AGO
ComicBook

The upcoming Thor: Love and Thunder will do the thing that no Marvel fan ever thought would happen, bring back Oscar winner Natalie Portman as Jane Foster. Not only will the star be back as her character for the first time since 2013's Thor: The Dark World, but her character will become the God of Thunder and pick up the hammer as The Mighty Thor. To get ready for her triumphant return the actress bulked up in a big way, Portman opened up about her preparation process for the role revealing in a new interview that she feels strong "feel strong for the first time" in her life.
CELEBRITIES・14 DAYS AGO
Time Out Global

All the madness to expect from ‘Thor: Love and Thunder’

It’s been a long, strange trip for Marvel’s Asgardian God of Thunder. What started as a fish-out-of-water adventure with Shakespearean overtones in 2011’s Thor jack-knifed into one of the MCU’s most bawdily hilarious and visually inventive yarns. All it took was for somebody somebody – specifically writer-director Taika Waititi – to realise ‘hey, maybe a bro-y space warrior who rides around on rainbows, throws a big hammer and drinks like a Viking should be played for laughs.’ Ever since Thor: Ragnarok emerged from the Devil’s Anus and embraced the comedic superpowers of swole Aussie demigod Chris Hemsworth, the franchise hasn’t looked back.
MOVIES・14 DAYS AGO
Newsweek

Natalie Portman is the most recent star to talk about what it took to make her strong for her MCU return in "Thor: Love and Thunder."
MOVIES・10 DAYS AGO
codelist.biz

He loves working with his buddy Matt Damon

Once two friends who became stars overnight and even received an Oscar the following year for the film’s script they wrote together. Memories of that early breakthrough came back when Damon and Affleck recently got together for a question and answer session for Ben’s new film, Out of Play, hosted by Damon. The sports drama about a high school basketball coach with a drinking problem, clearly a personal project of the heart for Affleck, earned him some of the best reviews of his career. The two Hollywood stars talked about the kind of dramas they initially enjoyed making – and which they will hopefully continue to do. Also with their expected reunion later this year: Ridley Scott’s ‘The Last Duel’.
CELEBRITIES・11 DAYS AGO