Democrats say they have the votes to advance $3.5T budget measure 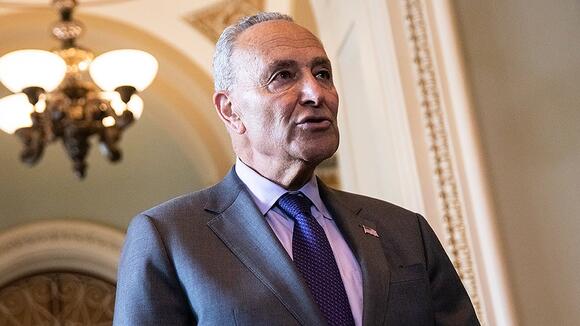 Senate Democrats say they have the votes needed to pass a $3.5 trillion budget resolution, which would green light a massive spending measure packed with President Biden ’s top legislative priorities.

In addition to the $1.2 trillion bipartisan deal currently being debated by the Senate, Democrats are expected to try to pass a $3.5 trillion bill along party lines through a budget process that lets them bypass a GOP filibuster.

In order to do that, they first need to pass a budget resolution that will include the top-line figure and instructions for crafting the Democratic-only bill, which will require total unity from all 50 members of the Democratic caucus.

Senate Majority Leader Charles Schumer (D-N.Y.), speaking from the floor, said Democrats were "on track" to pass both before leaving for a weeks-long August break.

“In order to start work on a reconciliation bill, the Senate must pass a budget resolution first. And we are on track for that as well," Schumer said.

Schumer's update comes after the Senate, with the support of 17 GOP senators, agreed to take up a $1.2 trillion bipartisan infrastructure deal. Because the text of the agreement is still being finalized, the Senate is advancing a shell bill that they will swap the language into once it is finished.

Senators are warning that debate of the bipartisan deal could eat up a week or two of floor time, with Republicans pushing for a robust amendment process.

But after, or if, they pass the bipartisan bill, Democrats are expected to turn to the budget resolution. Schumer said they have the 50 votes needed to avoid a filibuster.

“I’m proud of my Democratic caucus, every one of them voting yesterday for this [bipartisan] bill and all pledging to go forward on the second track as well," Schumer said referring to the budget resolution.

Schumer, Senate Budget Committee Chairman Bernie Sanders (I-Vt.) and Budget Committee Democrats announced earlier this month that they had agreed to a $3.5 trillion price tag for the budget resolution and subsequent spending package.

Sanders told reporters that he expects to have 50 votes from the Democratic caucus for the budget resolution, which he predicted to come to the floor next week.

"As I understand it, next week we're going to have 50 votes in order to pass a 3 1/2 trillion dollar budget resolution," he said.

A key group of moderate senators hasn't committed to supporting the massive spending package itself, which will include top party priorities including immigration reform, expanding Medicare and combating climate change. The Senate isn't expected to vote on that bill until at least September, and Democrats have warned it could slip beyond that.

But they are signaling they will vote to take up the budget resolution to get the process started.

Sen. Jon Tester (D-Mont.) has said he will vote to start debate. Sen. Joe Manchin (D-W.Va.) told reporters on Wednesday that he supported moving forward with the budget resolution and described himself as open to the details.

And while Sen. Kyrsten Sinema (D-Ariz.) said Wednesday that she doesn't support a $3.5 trillion price tag on the eventual bill, she added that she has "made clear that ... I will support beginning this process."

they are lame duck ...Nothing will pass this year to close to midterms..and haven a partisan political theater investigation that will out weigh congress for reast of the year

Really? Sinema reportedly said NO. So, unless they're holding someone she loves hostage in exchange for her yes vote, I'm going to take the wait and see approach. ;)

Top Dems: We have framework to pay for $3.5T bill; no detail

WASHINGTON — (AP) — The White House and congressional Democrats have agreed to a “framework" of options to pay for their huge, emerging social and environment bill, top Democrats said Thursday, but they offered no details and the significance was unclear. Senate Majority Leader Chuck Schumer of New York and...
CONGRESS & COURTS・19 HOURS AGO
PBS NewsHour

Top Democrats say they have framework to pay for $3.5 trillion environmental bill

WASHINGTON (AP) — The White House and congressional Democrats have agreed to a “framework” to pay for their huge, emerging social and environment bill, top Democrats said Thursday, but they offered no details and the significance was unclear. Senate Majority Leader Chuck Schumer of New York and House Speaker Nancy...
CONGRESS & COURTS・13 HOURS AGO
NBC26

WASHINGTON — Top congressional Democrats say they and the White House have agreed to a "framework" to pay for their emerging $3.5 trillion social and environment bill. Senate Majority Leader Chuck Schumer and House Speaker Nancy Pelosi revealed the development to reporters on Thursday. But they offered no details, and the significance was unclear.
CONGRESS & COURTS・16 HOURS AGO
Reuters

Subscribe to Fortune Daily to get essential business stories straight to your inbox each morning. Time growing shorter, President Joe Biden planned to meet privately Wednesday with House and Senate Democrats as Congress worked to bridge party divisions over his big “build back better” agenda ahead of crucial voting deadlines.
PRESIDENTIAL ELECTION・1 DAY AGO
AFP

US President Joe Biden met Wednesday with the warring wings of his Democratic Party in an effort to save his troubled economic plans. The White House said in a statement Biden held three "productive and candid" meetings with two dozen members of Congress, as he dives in to try and settle an internal party squabble threatening to sink his ambitious social spending and infrastructure agenda. One meeting featured the two most powerful Democrats, House Speaker Nancy Pelosi and Senate Majority Leader Chuck Schumer. Both are close Biden allies but are struggling to get their ranks in line behind the economic plans. Biden then met with a group of moderate Democrats, including senators Joe Manchin and Kyrsten Sinema, who have got cold feet about the huge price tag.
PRESIDENTIAL ELECTION・1 DAY AGO
WashingtonExaminer

Manchin, Sinema and even the Squad might just stop the $3.5T monstrosity

Can Joe Manchin and Kyrsten Sinema save America from ruin? All of Washington is watching as Monday’s deadline approaches for a House showdown over the bipartisan infrastructure bill passed by the Senate. Moderate and progressive Democrats are each trying to call the other’s bluff. The question is whether one side blinks or both cut a deal. If neither happens, that will be good news for fiscal sanity and bad news for President Biden’s agenda.
CONGRESS & COURTS・1 DAY AGO

Let’s describe this process as "ripening" an issue. Expect Senate Democrats to use a potential standoff over the debt ceiling, voting rights and even the parliamentarian’s decision that immigration reform doesn’t qualify for a budget bill as a way to make the case to modify the filibuster. This is a...
PRESIDENTIAL ELECTION・1 DAY AGO
Shore News Network

Eleven senators endorsed House progressives’ vow Tuesday to vote against the bipartisan infrastructure bill when it comes up for a vote Monday if Democrats’ $3.5 trillion spending bill was not passed first. “Congress has the opportunity to pass the most consequential economic legislation since the New Deal,” they collectively wrote....
CONGRESS & COURTS・1 DAY AGO
CBS News

Washington — House Speaker Nancy Pelosi told her Democratic colleagues on Monday that they should brace for "adjustments" to the $3.5 trillion social spending package to fit the Senate's constraints for the budget process lawmakers are using to fast-track the legislation through Congress. Democratic-led House committees completed work last week...
CONGRESS & COURTS・2 DAYS AGO
POLITICO

“If any member of Congress is not concerned that this could fall apart, they need treatment,” said Rep. Emanuel Cleaver (D-Mo.).
PRESIDENTIAL ELECTION・2 DAYS AGO

House Democrats on Tuesday are planning a vote on legislation to avert a partial government shutdown and raise the U.S. debt ceiling, as Republicans say they won't help raise the borrowing limit.
PRESIDENTIAL ELECTION・2 DAYS AGO
WashingtonExaminer

Fewer than a dozen Republicans are expected to back the Senate-passed bill. (For now.)
CONGRESS & COURTS・2 DAYS AGO
Los Angeles Times

Democrats struggle to get Biden's plan back on track

WASHINGTON (Reuters) – Democrats in the U.S. House of Representatives advanced a bill on Tuesday that would protect the right to abortion and annul some new restrictions passed by Republican-controlled state governments. If the “Women’s Health Protection Act” passes the Democratic-controlled House, it is unlikely to succeed in the 100-member...
CONGRESS & COURTS・2 DAYS AGO
Reuters

WASHINGTON, Sept 21 (Reuters) - U.S. Senate Majority Leader Chuck Schumer signaled to Republicans on Tuesday that if they block an upcoming election reform bill, he will look for a path around the chamber's filibuster rule to try to pass it with only Democratic support. Schumer noted that Democratic Senator...
CONGRESS & COURTS・2 DAYS AGO
TheAtlantaVoice

The House voted late Tuesday to keep the government funded, suspend the federal debt limit and provide disaster and refugee aid, setting up a high-stakes showdown with Republicans who oppose the package despite the risk of triggering a fiscal crisis. The federal government faces a shutdown if funding stops on Sept. 30, the end of the fiscal year — midnight […]
CONGRESS & COURTS・2 DAYS AGO
CNBC

The Senate parliamentarian ruled Democrats could not include a pathway to citizenship for millions of undocumented immigrants as part of their budget bill. Senate Majority Leader Chuck Schumer said Democrats have prepared "alternate proposal" to address immigration reform as part of the $3.5 trillion proposal. Democrats and Republicans have failed...
CONGRESS & COURTS・3 DAYS AGO