Magic Johnson married a woman of ageless beauty! She recently showed off her looks in a pricey designer outfit while enjoying some cool sea breeze on a yacht. Get to know more about her.

Magic Johnson's wife, Cookie, is 62 years old, but she recently proved that she could pass for a woman half that age when she took to her Instagram page with a picture that showcased her youthful body.

In the shot, Cookie lounged casually on a white luxury yacht out at sea. A bare rocky outcrop in the middle of the ocean made for a perfect backdrop but did not distract from the true star of the shoot. 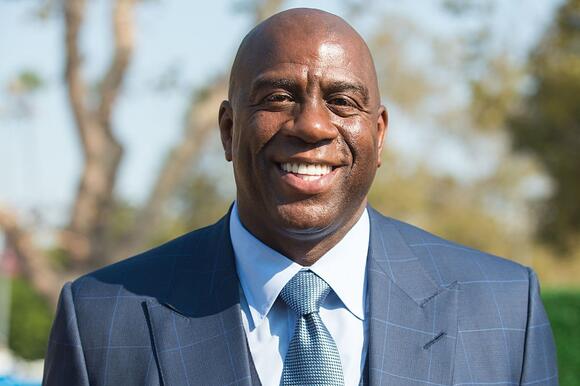 She was dressed in a $678 Dolce&Gabbana polka dot swimsuit with a plunging neckline that revealed just a slice of glowing cleavage.

The swimsuit was complimented by a colorful robe that added a dash of color to the otherwise monochrome tone set by the black and white polka-dotted swimwear.

Her face, adorned with shades, was turned away from the camera, providing a clear view of the golden hoop earring that adorned her ear. Her long dark hair was styled in a single ponytail.

In her caption, she shared that she was "savoring the moments." Precisely what she seemed to be doing as she reclined on the yacht under the cloudy blue sky.

In the comments section, fans gushed over the post. One wrote, "Girl to better be beautiful, you make being 62 looks easy. I love it! I feel the positive vibes through this photo; thanks for sharing. You and Magic are such a blessing."

That single comment echoes what most people think of Cookie and her longtime husband. The two of them have been through quite a lot together.

Cookie and Magic met for the first time at a party they attended as freshmen at the Michigan State University in 1977. At the time, there was a long line of women who wanted to meet Magic, but to her surprise, he chose her.

Cookie did not expect a lot from their first date, but he totally swept her off her feet when he took her to an actual steakhouse. They spent the night chatting together like old friends, and that was the moment she found herself falling in love.

REVELATION THAT ROCKED THEIR WORLD

Cookie Johnson and Magic Johnson tied the knot in 1991 in a ceremony that was held in Lansing, Michigan. Forty-five days later, he would receive a terrible diagnosis. He was infected with HIV.

Cookie had to take a test to assure their safety, and it came back negative both for herself and their child.

Cookie has been candid in the past about how she felt after receiving the news from Magic. The revelation "scared her to death," but thankfully, all she did was fall to the ground in shock rather than actually pass on to the great beyond.

Her book "Believing in Magic" highlights all she and Magic have gone through together and how she dealt with the sad news. At the time, Cookie had been pregnant, so her fear had been fully justified.

Even though they had just been married for 45 days leaving him never occurred to her. Instead, she was more concerned about how they would keep him alive. The year was 1991, and there was little information on the subject of HIV.

One reason separating was not an option for them was that they had been expecting their first child together. As a result, Cookie had to take a test to assure their safety, and it came back negative both for herself and their child.

Cookie went on to help her husband get used to his new life while attending to her duty as a mother. It's no wonder Magic is so full of praises for her. He loves her so much; he once called her the "perfect partner" and "soulmate."

Cookie and Magic's first child was named EJ, who has become an influential TV celebrity. Aside from him, they also have a daughter named Elisa. She was adopted in 1995 and has made several appearances on the big screen.

Cookie and Magic did a good job raising their kids to become the best they can be despite all the trials they faced as a young couple.

I'm here because I read...."plunging neckline, showcased her Body, swimsuit, a Beauty, Revealed!, Cleavage!" what a Let Down!

A 678 dollar swimsuit? Truly, a multitude of years does not always equal wisdom.

Before their lavish wedding, NBA legend Magic Johnson tried to call off his wedding to Cookie three times but was successful only twice. Now they have been married for thirty years. See their heart-melting anniversary messages. Lakers champion Magic Johnson found a brilliant woman, Cookie, to call his own in...
NBA・3 DAYS AGO
Amomama

Simone Biles made her Met Gala debut on September 14th in New York. She showed up at the event in a magnificent outfit, which left many talking. Read on to find out what fans had to say about her look. American Gymnast Simone Biles enjoyed a night of glamour at...
NEW YORK CITY, NY・3 DAYS AGO
Amomama

Find out the details of Marvin Gaye's relationship with his second ex-wife, Janis Hunter, who had three children with him and wrote a book to tell the tale of their love. Marvin Gaye is regarded as one of the most iconic singers in music history. He helped to shape the sound of Motown in the 1960s, which earned him the nickname "Prince of Motown" and "Prince of Soul."
THEATER & DANCE・3 DAYS AGO
Amomama

Famous actor LeVar Burton is known for his role as Kunta Kinte in "Roots." He is a proud father of two, but his kids are not the only ones dear to him. He also has a granddaughter who he adores. For over three decades, LeVar Burton has graced the screen...
CELEBRITIES・1 DAY AGO

Michael Jordan's daughter, Jasmine Jordan began the new week with a trip to the zoo, then she shared photos flaunting her enviable legs in a black dress while posing near a gigantic diplodocus. Jasmine Jordan is Michael Jordan's oldest daughter and last child from his first marriage. The young lady...
CELEBRITIES・21 DAYS AGO
Ok Magazine

Rebel Wilson Strikes a Sultry Pose in a Plunging Swimsuit

Supermodel and "America's Got Talent" judge Heidi Klum shared in a recent interview how her daughter, rising model Leni Klum, nailed her Dolce & Gabbana catwalk. Read her revelations below. Regarded as one of the most beautiful models of all time, Heidi Klum seems to have found her match when...
THEATER & DANCE・12 DAYS AGO

After her recent upset win at the US Open, Leylah Fernandez receives a Twitter shoutout from Sloane Stephens and Magic Johnson.

Rebel Wilson's sunset swimsuit photo might be her most beautiful yet

Rebel Wilson has blown her fans away with a stunning beach photo. The Australian star shared a sunset snapshot showing her laying on the sand with her head resting in her hand. Her figure is on display in a plunging black swimsuit which she teamed with sunglasses and a sun...
CELEBRITIES・12 DAYS AGO
Amomama

Music legend Prince enjoyed a stellar career in the years that he ruled the music industry. One of his biggest songs, "Purple Rain," was inspired by a muse who died the same age as the legend. Prince was a significant force in the music world in the 80s and 90s....
MUSIC・2 DAYS AGO
Amomama

"The Cosby Show" star Geoffrey Owens's son, who bears an uncanny resemblance to his father, recently shared a picture of his artwork on Instagram. The once job-shamed "The Cosby Show" star Geoffrey Owens's son Jordyn Owens recently shared a post on his Instagram page. The post, which consists of five images, showed Jordyn sitting by the window side in a room surrounded by all his paintings in the first slide.
CELEBRITIES・17 HOURS AGO

Kate Hudson has paid tribute to a dear friend who passed away with a heartfelt and emotional message. The Music actress revealed her longtime hairdresser and celebrity stylist, David Babaii, has died and her Instagram post expressed just how heartbroken she is feeling. Kate shared several fun photos of herself...
CELEBRITIES・14 DAYS AGO
Amomama

Helen Mirren looked stunning in a post she shared on social media. The actress appeared years younger as she danced with Vin Diesel and Meghan Thee Stallion at the Dolce & Gabbana fashion exhibit. Helen Mirren got social media steaming with a post that showed her time at the Dolce...
THEATER & DANCE・14 DAYS AGO
rnbcincy.com

LISTEN LIVE. LIKE US ON FACEBOOK. FOLLOW US ON TWITTER. The pot is full with some very hot celebrity gossip for today’s “Gary’s Tea” update, featuring news on Jay-Z and Beyoncé’s upcoming multimillion-dollar vacation at sea and Gabrielle Union getting real on the topic of infidelity following her 2013 “break baby” controversy with current husband Dwyane Wade.
NBA・2 DAYS AGO
AOL Corp

Gabrielle Union is here! The actress made a fabulous arrival at the 2021 Met Gala on Monday. Union walked the carpet at the Metropolitan Museum of Art wearing a custom white ensemble that she revealed to ET's Rachel Smith took "1,400 hours" to create. "We've been working on this since...
BEAUTY & FASHION・5 DAYS AGO

Listen to Zendaya’s British Vogue cover interview from the October 2021 issue:. “One for the archive,” one might imagine Zendaya and her stylist Law Roach saying repeatedly as they compiled the British Vogue cover star’s Dune promo wardrobe. From the jaw-dropping plum Alaïa micro crop top and form-fitting, floor-sweeping skirt, to the new Bottega military-esque tailoring and glittering David Koma crop top gown, there was much for the actor to populate her growing treasure trove of her most fabulous looks with.
DESIGNERS & COLLECTIONS・12 DAYS AGO
ETOnline.com

The 42-year-old actress stunned as she arrived at the Metropolitan Museum of Art in New York City on Monday for the extravagant event, just hours after announcing her engagement. For fashion's biggest night, Hudson wore a light pink bralette with a matching skirt and stunning feathered coat by Michael Kors. She also rocked exquisite jewels by Lorraine and Giuseppe Zanotti heels.
NEW YORK CITY, NY・5 DAYS AGO
HollywoodLife

Miley Cyrus has stunned on stage at Summerfest 2021 while twerking in a studded pink halter top with thigh-high black boots. See the videos!. Miley Cyrus, 28, headlined Milwaukee’s Summerfest on September 17, and wowed the crowd as she performed some of the biggest hits from her 15-year career. The former Disney Channel star’s set included tracks from her 2020 album Plastic Hearts along with covers of songs like Blondie’s “Heart of Glass,” Janis Joplin’s “Maybe” and Stevie Nicks’ “Edge of Midnight.” Miley also twerked in a black mini skirt, which she paired with a pink halter-style crop top and thigh-high, studded black boots. “FOOL MOON,” she captioned a series of snaps of her dancing.
CELEBRITIES・9 HOURS AGO
Amomama

"The Real" co-host Jeannie Mai put her beauty and love for fashion on display in new pictures she shared on her Instagram page showing her posing on a cruise boat. American television presenter Jeannie Mai is famous for being one of the co-hosts of the syndicated daytime talk show "The Real."
BEAUTY & FASHION・23 DAYS AGO