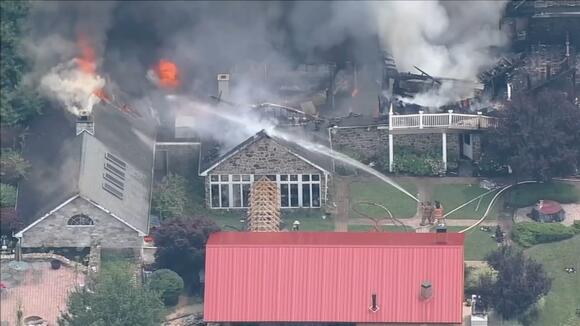 In an effort to quell rumors, officials said Thursday that a massive home explosion in West Brandywine Township, Chester County, was not sparked by criminal activity. Two adults and four children were injured in the July 21 explosion and fire on the 400 block of Hibernia Road. Firefighters and EMS responded to the home and found the victims suffering from burn injuries. Chopper 6 Video over the scene:

Chopper 6 over the scene of a house explosion in West Brandywine Township, Chester County.

Officials said one adult and two children were flown from the scene by medical helicopter to an area hospital, and two others were taken to a hospital by ambulance. According to police there "are continued rumors being circulated regarding the matter that the property owner was involved in criminal activity, including running a meth lab and intentional harm to family." RELATED: 2 adults, 4 kids injured in Chester County house explosion But officials say that is not the case. "We can confirm that NO criminal activity or intentional injury, for any reason, was the cause of this incident, again, NO criminal activity of any part was attributed to this unfortunate incident," police said in a statement released Thursday. Linsey Carpenter, who lives nearby, said she heard the explosion and went to help the family. "We saw the little girl run across the street. We grabbed her and checked her out. Her hair was singed, her eyebrows were singed. Then the little boy came out and that's when the flames started," she said. Police asked people in the area to "please correct any rumors that continue to circulate in the community" as the family continues to heal from the tragic incident. The cause of the explosion has yet to be determined.

Sources say a group of young women, either in their teens or in their early 20s, started a fight overnight. One of them pulled out a gun and shot a couple in their mid 40s.
MONTGOMERY COUNTY, PA・23 HOURS AGO
6abc Action News

The motorcyclist was thrown from his bike and pronounced dead at the scene, police say.
PHILADELPHIA, PA・18 HOURS AGO

The trial for a teenager accused of murdering his ex-girlfriend by stabbing her over 30 times begins in Montgomery County, Pennsylvania.
PHILADELPHIA, PA・8 HOURS AGO
6abc Action News

PHILADELPHIA (WPVI) -- A man was shot outside a hotel in Center City Philadelphia, police say. It happened around 2 a.m. Monday outside the Philadelphia Marriott Downtown on Filbert Street between 12th and 13th. Police say the man was shot twice in his leg and thigh. He was taken to...
PHILADELPHIA, PA・18 HOURS AGO

"We have concluded that the gunfire, combined with the movement of the vehicle, precipitated responsive gunfire from the Sharon Hill police officers," said Stollsteimer on Monday.
DELAWARE COUNTY, PA・6 HOURS AGO
6abc Action News

Several shots fired during a shootout inside of a convenience store in Kensington leaves one person dead
PHILADELPHIA, PA・2 DAYS AGO
6abc Action News

Authorities in Delaware County say they have arrested one person and are looking for another in a scam targeting senior citizens.
DELAWARE COUNTY, PA・3 DAYS AGO
6abc Action News

Four teenagers in Lackawanna County, Pennsylvania are being charged with plotting to attack their high school, three years from now, when we will mark 25 years since the deadly massacre at Columbine.
SCRANTON, PA・1 DAY AGO
6abc Action News

The superintendent believes part of the problem is that issues from social media are making their way into the classroom.
5 HOURS AGO
6abc Action News

Investigators have ramped up their search for a missing New Jersey woman who was last seen three months ago in the Yucca Valley area of San Bernardino County.
CALIFORNIA STATE・2 DAYS AGO
6abc Action News

A local mosque has hired a security team to patrol and monitor the area amid the rise in gun violence.
PHILADELPHIA, PA・3 DAYS AGO
6abc Action News

A woman was injured when as at least nine bullets hit her home in Philadelphia's Olney neighborhood.
PHILADELPHIA, PA・3 DAYS AGO
6abc Action News