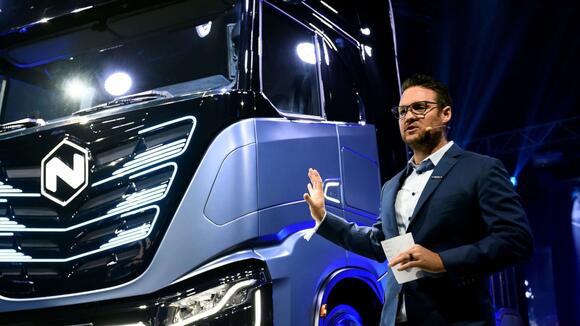 In a nearly 50-page indictment, prosecutors accused Milton of preying on vulnerable retail investors who had turned to trading after losing income due to the pandemic. In some cases, these victims lost their retirement savings, authorities said, as they outlined his web of false promises related to an electric truck that was never operable.

Milton pleaded not guilty on Thursday after being taken into custody and was released on a $100 million bond. A spokesperson for his legal team maintained that Milton is innocent in a statement to ABC News Thursday, calling the situation "a new low in the government’s efforts to criminalize lawful business conduct."

"Mr. Milton has been wrongfully accused following a faulty and incomplete investigation in which the government ignored critical evidence and failed to interview important witnesses," the statement added. "From the beginning, this has been an investigation in search of a crime. Justice was not served by the government’s action today, but it will be when Mr. Milton is exonerated."

MORE: Electric sports cars are shockingly fast and emissions-free. But will loyalists buy them?

Authorities had been investigating Milton and Nikola for more than a year after short seller Hindenburg Research called the firm an "intricate fraud" in a September report.

The company subsequently conceded video of its electric truck gave a misleading impression it was actually drivable. The company also said Milton had made inaccurate statements about the technology behind the vehicle. Federal prosecutors agreed.

The false promotional video for the semi-truck prototype known as Nikola One was referenced heavily in the indictment. The concept included a shot of the Nikola One coming to a stop in front of a stop sign, according to the indictment.

"In order to accomplish this feat with a vehicle that could not drive, the Nikola One was towed to the top of hill, at which point the 'driver' released the brakes, and the truck rolled down the hill until being brought to a stop in front of the stop sign," prosecutors wrote. "For additional takes, the truck was towed to the top of the hill and rolled down the hill twice more."

Phoenix-based Nikola planned to build battery- and hydrogen-fuel cell-powered heavy trucks for long-haul trucking and the company had been valued at more than $12 billion. The doubts raised by short sellers and regulators have tanked the stock price and scuttled a deal with General Motors to take a stake in the company.

Nikola said in a statement, "Trevor Milton resigned from Nikola on September 20, 2020 and has not been involved in the company’s operations or communications since that time. Today’s government actions are against Mr. Milton individually, and not against the company. Nikola has cooperated with the government throughout the course of its inquiry."

Prosecutors said Milton lied at every turn about the company's ability to produce its electric truck.

According to the indictment, Milton made false and misleading statements about the company's success in creating a fully functioning Nikola One prototype when he knew that the prototype was inoperable. He also made false statements about an electric- and hydrogen-powered pickup truck known as the Badger using Nikola's parts and technology when he knew that was not true, the indictment claimed.

"Among the retail investors who ultimately invested in Nikola were investors who had no prior experience in the stock market and had begun trading during the COVID-19 pandemic to replace or supplement lost income or to occupy their time while in lockdown," prosecutors wrote.

When it emerged that Milton's statements were false and misleading, the value of Nikola's stock plummeted.

"As a result, some of the retail investors that Milton's fraudulent scheme targeted suffered tens and even hundreds of thousands of dollars in losses, including, in certain cases, the loss of their retirement savings or funds that they had borrowed to invest in Nikola," the indictment added.

A federal judge cleared the former CEO of a suburban engine manufacturer and two ex-employees of criminal wrongdoing in a fraud case that accused the trio of inflating company profits by nearly $25 million to meet investor expectations.
PUBLIC SAFETY・2 DAYS AGO
The Free Press

SAN JOSE, Calif. (AP) — In a story published September 8, 2021, about the opening day of the fraud trial of fallen Silicon Valley tech star Elizabeth Holmes, The Associated Press erroneously reported a statement made by her attorney Lance Wade due to a dropped word. The quote should have been reported as: “If what government is trying to show is that Theranos’ clinical lab was not well run from 2013 to 2016, we will likely agree with what they have to say,” Wade said. “Poor operations in the lab was one of Theranos’ biggest failures, but it wasn’t fraud.” The quote previously stated that the clinical lab was well run.
SAN JOSE, CA・14 DAYS AGO
Shore News Network

NEW ORLEANS, LA – U.S. Attorney Duane A. Evans announced today that on August 27, 2021 a Bill of Information charging DEMETRIA MYERS SILVIO, age 32, of New Orleans, Louisiana, with Wire Fraud, in violation of Title 18, United States Code, Section 1343. If convicted, SILVIO faces a maximum term of twenty (20) years imprisonment and/or a fine of $250,000.00 or the greater of twice the gross gain to the defendant or twice the gross loss to any person of the offense. In addition, SILVIO faces a term of supervised release of up to three (3) years after her release from prison and a mandatory $100 special assessment fee.
NEW ORLEANS, LA・12 DAYS AGO
albuquerqueexpress.com

US charges 3 with $155 mn investment fraud

Washington [US], September 9 (ANI/Sputnik): Three operators of a defunct financial firm with clients in the US, South America and Europe face prison sentences of up to 70 years for their roles in an investment fraud scheme that resulted in losses of $155 million for clients, the Justice Department said on Thursday.
PUBLIC SAFETY・14 DAYS AGO

Lucid Motors has been promising an electric car with a particularly large driving range for several years. Now their “air” numbers are official and did not deceive the confident company. The 933-horsepower Lucid Air is turning the car world upside down. Lucid Air officially travels 837 kilometers according to the...
CARS・1 DAY AGO
MarketWatch

Ford Motor Co. said it has invested $50 million in lithium-ion battery supply chain company Redwood Materials, as the companies announced Wednesday they were teaming up to build out a U.S. battery supply chain and battery recycling for electric vehicles. Ford's stock rose 0.6% in premarket trading. The companies said "closing the loop," in which materials used to make batteries are recycled and used again, will lower costs and reduce reliance on imports and mining raw materials. "Creating a U.S. circular supply chain is a major step toward making battery electric vehicles sustainable, accessible and affordable for more Americans," the companies said in a statement. Automaker Ford said the investment in Redwood Materials is part of its plan to invest more than $30 billion in electrification through 2025. Ford's stock has dropped 14.4% over the past three months through Tuesday, while shares of rival General Motors Co. have slumped 16.7% and the S&P 500 has gained 2.5%.
BUSINESS・1 DAY AGO
MarketWatch

Electric vehicle company Workhorse Group Inc.'s shares slid 10% in premarket trade Wednesday, after the Cincinnati-based company said it is suspending delivering of its C-1000 vehicles and recalling 41 it has already delivered. The company said its new management team has determined that the vehicles require enhancements to increase payload capacity and that further testing and modifications will be required to certify the vehicle under Federal Motor Vehicle Safety Standards. The company is expecting to complete testing in the fourth quarter and will offer an update on operating and commercial plans on its coming third-quarter earnings call. "We continue to be confident in our ability to be a leading manufacturer of last-mile delivery vehicles over the long term," CEO Rick Dauch said in a statement. Workhorse has filed a report with the National Highway Traffic Safety Administration on the need for testing. Shares are down 59% in the year to date, while the S&P 500 has gained 16%.
ECONOMY・1 DAY AGO

ALBANY, N.Y. (NEWS10) — According to the Department of Justice (DOJ), Tramaine Pope, 33, of the Bronx pleaded guilty on Tuesday to obtaining $314,168 through fraud. She pleaded to abusing her position as a senior employment security clerk at the Department of Labor (DOL) to submit, approve, and cash in on 20 false unemployment insurance applications.
ALBANY, NY・2 DAYS AGO
The Independent

PSA Peugeot’s takeover of Fiat Chrysler to form the world’s fourth-largest carmaker has had its first executive casualty, with former Fiat Chrysler CEO Mike Manley stepping down as his role of head of the Americas Stellantis announced Tuesday that Manley, 57, was leaving to become CEO of the largest dealership network in the United States, AutoNation Inc., based in Florida. Manley will not be replaced, and Americas chief operating officer Antonio Filosa will report directly to Stellantis CEO Carlos Tavares. Manley was named CEO of Fiat Chrysler in July 2018, coinciding with the illness and sudden death of...
BUSINESS・2 DAYS AGO
Los Angeles Times

Hammond, IN-(ENEWSPF)- Sergio Gutierrez, age 49, of Hobart, Indiana, has been charged by way of an Indictment with mail fraud, announced Acting U.S. Attorney Tina L. Nommay. According to documents in this case, it is alleged that Sergio Gutierrez devised a scheme that began around or about May 2015 and continued through December 2019 to defraud the Lake County Auditor’s Office by using other individuals to purchase properties through the Lake County Commissioners’ tax sales when Gutierrez, himself, was prohibited from doing so. The scheme enabled Gutierrez to obtain property without paying delinquent property taxes. As part of that scheme, Gutierrez caused notice to be deposited in the United States Mail, in violation of the federal mail fraud statute.
HOBART, IN・8 DAYS AGO
lehifreepress.com

Washington, D.C., Sept. 14, 2021 – The Securities and Exchange Commission today announced that ProSky, Inc., a Utah-based purported provider of human resources software and services, and its Chief Executive Officer, Crystal A. Huang, of Lehi, Utah, have agreed to pay more than $4.7 million to settle charges that they defrauded investors by providing investors with falsified bank statements and balance sheets, inaccurate customer lists, and other information that materially misrepresented ProSky’s financial condition over a multi-year period.
BUSINESS・9 DAYS AGO
Shore News Network

ALPINE – A former Monahans businessman pleaded guilty today to 12 counts of failure to pay withholding taxes. According to court documents, George Wayne Johnson, 73, of Lawrenceburg, TN, was the owner of Wayne’s Welding Services (WWS) in Monahans. From 2015 to 2018, WWS withheld tax payments from its employees’ paychecks but failed to pay $1,308,797 in required payroll tax to the Internal Revenue Service (IRS). Through his company, Johnson spent hundreds of thousands of dollars on his salary and personal expenses.
ALPINE, NJ・15 DAYS AGO