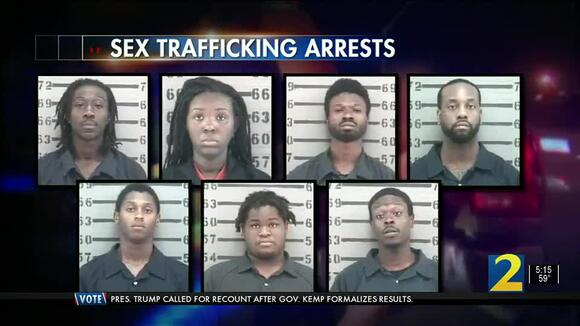 ALBANY. Ga. — Eight members of the Bloods gang in Georgia have been indicted on human trafficking charges after a 16-year-old girl escaped and reported them, the attorney general said on Thursday.

The victim escaped from members of the Inglewood Family Gang in Albany in August of 2019. The group is a sect of the national criminal gang the Bloods, which originally formed in Los Angeles.

The victim was able to escape from gang members and report her abuse to authorities, prompting a year-long investigation by the GBI.

The investigation revealed that the gang members placed the victim in sexual servitude in order to generate money.

Investigators found that the victim was advertised as an adult online. Gang members would make arrangements for the victim to have sex with numerous men over a two-month time frame from June to August 2019. The arrangements were known as “plays,” and would occur in hotels, motels and vehicles throughout Albany. Proceeds from the trafficking funded the gang and its other illegal activities, investigators said.

Plain and simple…white or black or green.. throw their asses in jail with no mercy and let the inmates give them a taste of their own medicine… theres justice.

Did FBI take a year to watch those girls be in servitude? Most the research for court seems to be generated from the internet. Thats okay. But what happened to other girls they had to be watching if they also watched the gang members.

Horrific. They are going to get a slap on the wrist and be back on the streets in 6 months. Going to happen again to someone else, and this poor 16 year old, will be looking over her shoulder for the rest of her life. Sad.

No signs of Gabby Petito's boyfriend after days of searching

ST. PETERSBURG, Fla. — (AP) — Search teams found nothing of note Wednesday at a Florida wilderness park where they have spent days looking for the boyfriend of Gabby Petito, the young woman who authorities say was killed while on a cross-country trip with him. The search resumed Wednesday morning...
SAINT PETERSBURG, FL・12 HOURS AGO
WSB Channel 2 Atlanta

GWINNETT COUNTY, Ga. — A man has filed a federal lawsuit against Gwinnett County after witness video showed two police officers kick him while he was handcuffed. Demetrius Hollins, now 26, said the 2017 run-in with police left him traumatized. For the first time, his legal team allowed him to...
GWINNETT COUNTY, GA・14 HOURS AGO
WSB Channel 2 Atlanta

COBB COUNTY, Ga. — Authorities are asking for help in finding the family of a man hit and killed by a car last week in Cobb County. Marietta police said a 46-year-old Hispanic man was attempting to cross Powder Springs Street just North of Chestnut Hill Road around 9 p.m. on Sept. 17. He was hit by a Cadillac SUV and suffered serious injuries.
COBB COUNTY, GA・1 HOUR AGO

Police believe a toddler may have fatally shot himself after finding and accidentally firing a family member’s gun in a Texas apartment, authorities said. According to KCEN and KWKT, the incident occurred shortly after 6 p.m. Wednesday at a home in the University Club Apartments in Waco. Waco police arrived to find a 2-year-old boy who had been shot in the head and rushed him to a nearby hospital, where he was later pronounced dead, the news outlets reported.
TEXAS STATE・2 HOURS AGO
WSB Channel 2 Atlanta

DENVER — (AP) — Three assisted living facility workers are being prosecuted in the death of an 86-year-old woman with Alzheimer's disease who authorities alleged was left outside in sweltering weather for six hours, officials said. Jamie Johnston, 30, Jenny Logan, 50, and Letticia Martinez, 27, were charged with negligent...
PUBLIC SAFETY・13 HOURS AGO
WSB Channel 2 Atlanta

CLAYTON COUNTY, Ga. — Several attorneys say that inmates at the Clayton County Jail are abused so often for no reason that the District Attorney needs to investigate. A lawsuit against Clayton County Sheriff Victor Hill that was filed earlier this month alleges that Hill routinely violated the civil rights of inmates in his care.
CLAYTON COUNTY, GA・8 HOURS AGO
WSB Channel 2 Atlanta

ATLANTA — Atlanta police are investigating a deadly overnight shooting in Midtown. Police told Channel 2 Action News that officers were called to The Mark apartments at 955 Spring Street in reference to a shooting. Officers said the person who lives at one of the units came home to find...
ATLANTA, GA・2 HOURS AGO

RIDGE MANOR, Fla. — An act of kindness went awry for a Florida woman and her daughter on Tuesday. The women, who were helping two men who had crashed on an interstate highway, were instead carjacked and forced to drive the men more than 40 minutes south to Tampa, the Florida Highway Patrol said in a news release.
FLORIDA STATE・6 HOURS AGO
WSB Channel 2 Atlanta

LOUISVILLE, Ky. — One teen was killed and two others were injured Wednesday in a drive-by shooting at a bus stop in Louisville, authorities said. Tyree Smith, 16, was pronounced dead at an area hospital, the Courier-Journal reported. A 13-year-old boy was wounded and taken to an area hospital with non-life-threatening injuries, and a 14-year-old girl was grazed on the ankle and declined medical treatment, the newspaper reported.
LOUISVILLE, KY・6 HOURS AGO