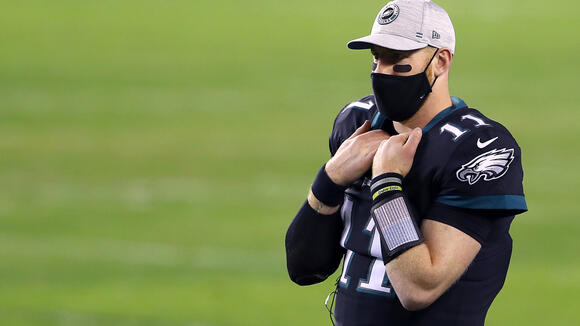 PHILADELPHIA (CBS) — Carson Wentz isn’t a quarterback for the Philadelphia Eagles anymore, but fans will still keep an eye on him this season. And on Wednesday, he dropped some potential news that might concern his former team.

On the first day of the Indianapolis Colts’ training camp, Wentz declined to say he was vaccinated, citing a “personal decision.”

Wentz wore a mask during his entire media session. According to the NFL’s mandate , unvaccinated players must wear masks during media availability.

There’s a chance that Wentz was being cautious, but he also could’ve just said he was vaccinated.

If Wentz isn’t vaccinated and doesn’t eventually plan to, it could potentially affect the draft pick the Eagles acquired for him earlier this year.

If Wentz plays at least 75% of the Colts’ snaps or if he plays 70% and they make the playoffs, the conditional 2022 second-round pick turns into a first-round pick.

A 10-day isolation period could mean Wentz misses two straight games for the Colts. It’s unclear how missing a game due to being unvaccinated will affect a player’s snap count, but this development could be the difference between the Eagles getting a first-round pick or not.

Wentz has played at least 70% of the snaps every year in his career except in 2018 when he played 68 percent. On top of potentially not being vaccinated, Wentz’s injury history could affect the 2022 draft pick as well.

Meanwhile, general manager Howie Roseman revealed at the Eagles’ first training camp practice that at least 90% of the team is vaccinated. Quarterback Jalen Hurts said he is vaccinated, too.

The Philadelphia Eagles’ backfield is no longer crowded. Before the deadline passed for final rosters, the Eagles’ front office parted ways with veteran tailback Jordan Howard. Howard began his NFL career with such promise, rushing for over 1,300 yards as a rookie. He performed very well for the Chicago Bears...
NFL・16 DAYS AGO
NJ.com

ATLANTA -- Jalen Hurts needed just seven plays Sunday against the Atlanta Falcons to show Eagles fans that this year will be different. The polarizing starting quarterback wasted little time displaying his dual-threat ability in the 32-6 win at Mercedes-Benz Stadium, as he completed all four of his first-series passes, ran for a first down and tossed a beautiful bucket-pass touchdown to first-round pick DeVonta Smith.
NFL・4 DAYS AGO
chatsports.com

WESTFIELD, INDIANA - AUGUST 12: Head coach Frank Reich and Carson Wentz #2 of the Indianapolis Colts (Photo by Justin Casterline/Getty Images) There you have it. The definitive answer to the question many Indianapolis Colts fans have been waiting for. Quarterback Carson Wentz is not vaccinated, which, if you paid...
NFL・14 DAYS AGO
NBC Sports

An Eagles training camp running back is returning to Philly this weekend. But not as an Eagle. The 49ers on Tuesday signed Eagles castoff Kerryon Johnson to replace another one-time Eagles training camp running back, Raheem Mostert. The 49ers placed Mostert on Injured Reserve Tuesday with a season-ending knee injury suffered on opening day against the Lions in Detroit. The Eagles claimed Johnson on waivers from the Lions on May 7, and he spent training camp here before getting released with an injury settlement on Aug. 17. Johnson also had a knee injury. Johnson played in the Eagles’ preseason opener against the Steelers on Aug. 12 and had two carries for 12 yards. In three seasons with the Lions, Johnson rushed for 1,225 yards and a 4.3 average and caught 61 passes for 527 yards. Mostert spent 2015 training camp with the Eagles, piling up 157 rushing yards on 39 carries and 194 more yards on 14 receptions. After stints with the Dolphins, Ravens, Browns, Jets and Bears, he finally found a home with the 49ers. He’s been hurt much of his career but among running backs with at least 250 career carries, his 5.67 rushing average is 3rd-highest in NFL history, behind Skeets Quinlan, who played for the Rams in the 1950s (5.87), and Hall of Fame Marion Motley (5.70), who played for the Browns in the 1940s and 1950s. Mostert ran for 220 yards in the 2019 NFC Championship Game against the Packers.
NFL・2 DAYS AGO

How did ex-Eagles QB Carson Wentz play in debut with Colts?

Turns out, the best vaccination against Carson Wentz for Eagles fans was Jalen Hurts. It’s only Week 1, but Philly can feel better that general manager Howie Roseman made the right call by getting rid of Wentz, the oft-injured vaccine denier who still might be a liability this season as COVID-19 hovers.
NFL・4 DAYS AGO
ClutchPoints

Colts quarterback Carson Wentz has come under intense scrutiny lately for refusing to be vaccinated against COVID-19 . Now, in a press conference, Wentz doubled down and asked people to respect his decision, since he respects the decision of others. This comes just a few hours after Wentz returned from the COVID protocol list.
NFL・14 DAYS AGO
ClutchPoints

The Indianapolis Colts got their first look at new starting quarterback Carson Wentz on Sunday in their 28-16 loss at home against the Seattle Seahawks. While it was disappointing to end the game in a loss, there were plenty of positives to take away from the game. There were also quite a few things that obviously need to be improved moving forward.
NFL・3 DAYS AGO
Fox News

Colts' Carson Wentz elaborates on not being vaccinated: 'It's a personal decision'

Indianapolis Colts quarterback Carson Wentz was activated off the reserve/COVID-19 list on Thursday after he was considered to be a high-risk close contact following a positive COVID-19 test, which forced him to stay away from the team for five days. In late July, Wentz decided not to say whether he...
NFL・14 DAYS AGO

The Indianapolis Colts quarterback returned to practice for the first time since August 2 then fielded questions about his vaccine status from the press.
NFL・14 DAYS AGO
sportstalkatl.com

Falcons: Matt Ryan is not free of blame in loss to Eagles

There were notable offensive line struggles in the Falcons’ home-opening loss to the Eagles. The Philadelphia defensive line bullied Matt Hennessy, Kaleb McGary, and most embarrassingly, Jalen Mayfield. The first two drives were impressive and showed glimpses of what Arthur Smith’s innovative offense could look like in Atlanta, but both of those drives stalled in the red zone. Then, Atlanta had little to no success when they had the ball.
NFL・2 DAYS AGO
Larry Brown Sports

The Philadelphia Eagles made it clear that they didn’t have all that much faith in Carson Wentz when they drafted Jalen Hurts in the second round last year, but general manager Howie Roseman insists that was nothing personal. During an appearance on the WIP Morning Show on Wednesday, Roseman was...
NFL・9 DAYS AGO
arcamax.com

PHILADELPHIA — Philly can be an angry place. Just ask Santa. Sometimes that anger is misplaced, as Jayson Werth can attest. But, in this moment, every ounce of Philadelphia's fury directed at Ben Simmons and Carson Wentz is justified. Wentz forced a disastrous trade this spring to the Colts after...
NBA・12 DAYS AGO

Indianapolis Colts quarterback Carson Wentz was activated from the Reserve/COVID-19 List Thursday, along with wide receiver Zach Pascal and center Ryan Kelly. Wentz met with the media shortly thereafter, and was asked about his vaccination status after being deemed a "high-risk close contact" forced him to be away from the team for five days. In late-July, Wentz declined to say whether he was vaccinated, but said that whether he was or not was a "personal decision." He didn't deviate much from that script Thursday.
NFL・15 DAYS AGO
austinnews.net

Availability was the issue with Carson Wentz when it came time for the Philadelphia Eagles to chart their future late in 2020. Eagles executive vice president and general manager Howie Roseman revealed in a radio interview Wednesday that durability was the chief complaint about the No. 2 overall pick in 2016.
NFL・9 DAYS AGO
Fox Sports Radio

Doug Gottlieb doesn’t understand how anyone still has questions about the COVID-19 vaccines. With all of the information available about the vaccines, the idea that Wentz still has questions seems disingenuous. If he isn’t going to take the vaccine, he should stand up and take ownership of his decision instead of spouting anti-vax disinformation and claiming he doesn’t have enough information. That way, we can all move past his decision and deal with the reality of his situation. If he hasn’t taken the vaccine by now, it’s obvious he has no intention of ever taking it because there is no new information forthcoming.
PUBLIC HEALTH・13 DAYS AGO
profootballnetwork.com

The hope for fantasy football managers is that a change of location for Carson Wentz can adjust his outlook in 2021. A reunion with former offensive coordinator Frank Reich could be exactly what the former No. 2 pick requires. Can Wentz’s career be revived in 2021 and should fantasy managers be looking to draft him at his current ADP?
NFL・13 DAYS AGO
975thefanatic.com

Its not often that the news another teams QB will be suiting up is good news for a different team, but in this case, its huge for the Eagles. Ian Rapoport has reported Wentz is back to being a full participant in practice, and will play for the Colts this Sunday.
NFL・9 DAYS AGO
chatsports.com

Travis Fulgham #13 of the Philadelphia Eagles before the start of a preseason game against the New York Jets at MetLife Stadium on August 27, 2021 in East Rutherford, New Jersey. (Photo by Dustin Satloff/Getty Images) Once one door closes, another one usually opens up pretty fast. In keeping up...
NFL・13 DAYS AGO
NBC Sports

Despite the lack of transparency when it comes to which players are and aren’t vaccinated, circumstances will sometimes reveal the truth. For Colts quarterback Carson Wentz, the truth — thanks to a five-day absence after being deemed a close contact with someone who tested positive — is that he’s not vaccinated.
NFL・14 DAYS AGO
chatsports.com

INDIANAPOLIS — Colts starting quarterback Carson Wentz offered his first extensive thoughts on why he has not gotten vaccinated against COVID-19 so far. Here are some of his comments. Carson Wentz on why he's not vaccinated. “Trust me, it is a personal decision, and I’m not going to go in...
NFL・15 DAYS AGO