Colorado Drought Situation Improves For The First Time In Months

DENVER (CBS4) – Statewide drought at the start of the year eventually became exceptional drought on the Western Slope and no drought on the Front Range. That has been the situation since April but now there is finally improvement in western Colorado. 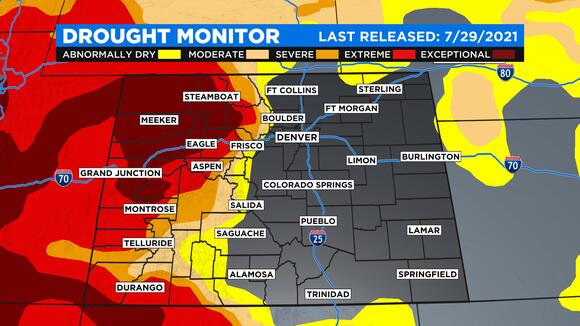 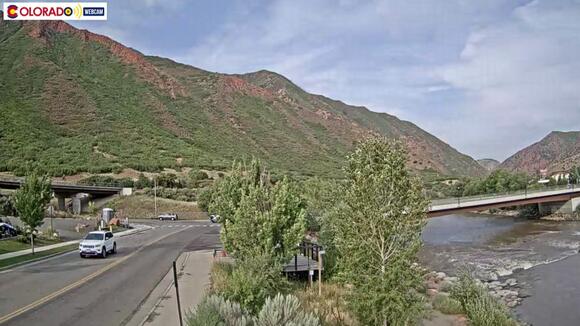 Glenwood Springs near the Colorado River Thursday morning. All of Garfield County has extreme or exceptional drought (source: coloradowebcam.net)

That being said, a grim situation remains on the Western Slope with about 15% of the state experiencing exceptional drought including Grand Junction, Glenwood Springs, Steamboat Springs, Craig, and Meeker. Still, that’s an improvement of 3% in the last week. 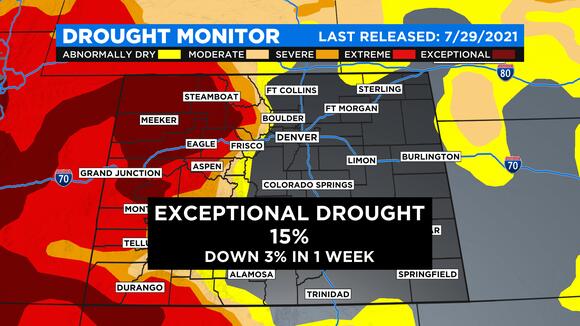 Another 27% of Colorado has at least extreme drought including Vail, Montrose, Cortez, and Durango which is an improvement of 1% in the last seven days. 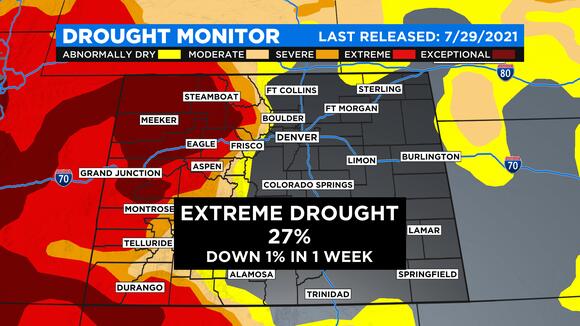 Occasional rain in recent weeks and periods of heavy rain in some areas has helped the numbers to improve.

Severe drought has decreased 3% in the last week and now includes about 33% of Colorado including Gunnison, Aspen, and Summit County north of Interstate 70. 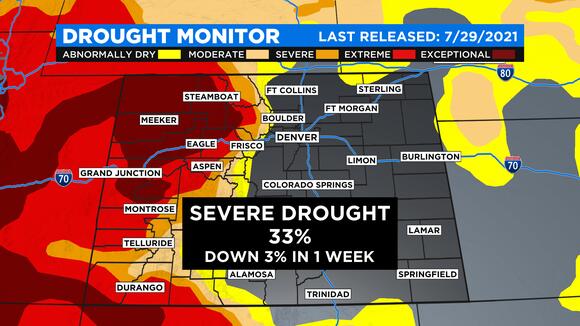 And finally, moderate drought has decreased 3% in the last week and now covers about 38% of the state including most of the San Juan Mountain region which has seen the most dramatic improvement recently thanks to monsoon moisture.

Southwest Colorado should continue to rep the biggest benefits with drought improvement into early August with more significant rain in the forecast. The region is under a Flash Flood Watch from Noon on Thursday through midnight Thursday night. 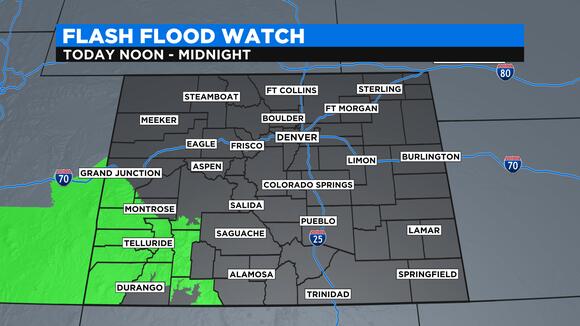 Eventually the moisture will spread much farther north and east across the rest of the high country through the weekend. Denver and the Front Range also have a good chance for rain during the upcoming weekend. Some parts of Colorado have the potential to get more than 2 inches of rain from Friday through Monday. 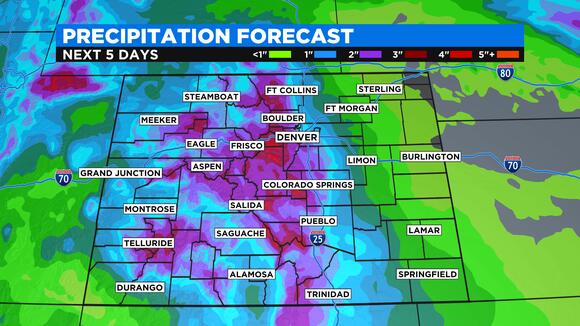 Of course that could be too much of a good thing in some areas. The burn scars will be closely monitored for flash flooding and mudslides and some roads may be forced to close including I-70 through Glenwood Canyon. 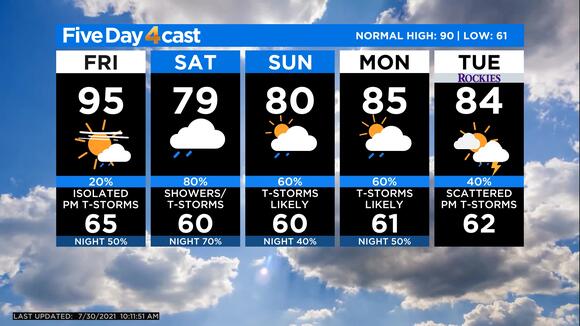 finally an acknowledgment... half the states been under flash flood warning everyday for the last six weeks... almost every major roads been closed at least once from actual flooding and we've had the wettest monsoon season in years

So now we can stop crying global warming right??? Normal cycles of weather that aren't predictable nothing new at all

A sunny, Saturday morning at the National Museum of World War II Aviation marked a first as well as a return to normal. Special Olympics Colorado put on its first plane pull fundraising event in Colorado Springs Saturday morning as 26 teams vied for the bragging rights of being the fastest team to pull a 1930s era plane 15 feet.
COLORADO STATE・7 DAYS AGO
informnny.com

FLAGSTAFF, Ariz. (AP) — The U.S. government released projections Wednesday that indicate an even more troubling outlook for a river that serves 40 million people in the American West. The Bureau of Reclamation recently declared the first-ever shortage on the Colorado River, which means Arizona, Nevada and Mexico will get...
POLITICS・3 DAYS AGO
MIX 94.9

UNDATED -- Recent rainfall has significantly improved the drought conditions in central Minnesota over the last week. The tri-county area has been upgraded from severe drought to moderate drought status. Parts of northern Minnesota remain in extreme drought, but the U.S. Drought Monitor maps show only pockets of extreme drought...
MINNESOTA STATE・2 DAYS AGO

DENVER (CBS4) – A ridge of high pressure will keep Colorado dry and unusually warm this weekend with some areas close to record highs. A few clouds may drift through from time to time and a stray shower is possible in the San Juan Mountains, but outside of that, it will be stunning statewide. High temperatures will run about 10-12 degrees above normal for this time of the year. That means widespread 80s are expected in Denver and on the Eastern Plains as well as the Western Slope. We’ll see mostly 70s in the high country with 50s and 60s above...
COLORADO STATE・9 HOURS AGO
The US Sun

A GHOST town has reappeared for the first time in almost 65 years after a historic drought in Utah. The area between Park City and Coalville re-emerged following a drop in reservoir levels in the state. Devon Dewey captured images of the forgotten town at Rockport Reservoir. He told KSL.com:...
POLITICS・4 DAYS AGO
CBS Denver

DENVER (CBS4) – Leaf peeping season is in full swing and Colorado Parks and Wildlife wants to make sure the people who drawn to the most scenic trails and parks leave no trace. “As we head into peak leaf-peeping season, it’s one of the busiest times of the year at our park,” Todd Farrow, Park Manager at Golden Gate Canyon State Park, said in a news release earlier this month. “We ask that people plan ahead, watch out for people and wildlife crossing slowly on roads and park in designated parking areas to avoid damaging vegetation.” Photo by Phyllis Jones of Denver on...
DENVER, CO・2 DAYS AGO
CBS Denver

DENVER (CBS4) – There is a lot happening in Colorado this weekend including the Broncos home opener and the final Rockies home stand. It should also be the best weekend of the season to view the fall foliage north of Interstate 70. The annual eruption of orange and gold is mostly driven by shorter duration of daylight. Therefore it is generally easy to determine when the leaves will change color across the four primary high country regions in Colorado. (source: CBS) For this upcoming weekend (September 25-26), the best viewing will be along and north of Interstate 70 where color is reported to...
DENVER, CO・9 HOURS AGO

August’s housing market followed the indicators that pointed toward a cooling off. After bidding wars hit a six-month low in July, home sales posted an annual decrease for the first time in 15 months, according to Redfin. Completed sales dropped 6% annually in August and 1.4% monthly. Meanwhile, pending sales grew 7% from August 2020 and 6.1% from July.
REAL ESTATE・9 DAYS AGO
CBS Denver

(CBS4) – National Public Lands Day is Saturday and that means the USDA Forest Service is waiving fees for the day in parks and recreation sites. The National Environment Education Foundation is the driving force behind the day, designed to be a volunteer event for the public lands. You can find a list of volunteer opportunities, both in-person and virtual, here. There are 50 opportunities in Colorado ranging from doing trail maintenance to planting flowers and shrubs and pollinator garden. The organization has also worked the USDA Forest Service, Bureau of Land Management, US Army Corps of Engineers and other federal...
COLORADO STATE・1 DAY AGO
centralrecorder.com

GABBY Petito’s last Instagram photo that was “posted by her fiancé after her death” has become a memorial for hundreds of mourners. Visitors paid their respects to the late YouTuber by setting up a memorial outside The Monarch in Ogden. The vlogger’s final snap shows her smiling in front of...
CELEBRITIES・1 DAY AGO
Denver Post

Wildfire burning in the foothills west of Arvada

A wildfire broke out Friday afternoon in the foothills west of Arvada. The fire, in the Coal Creek Canyon Fire District, is burning about a quarter mile west of the intersection of Colorado highways 72 and 93, according to the Arvada Fire Protection District. It was reported at about 1:45...
ARVADA, CO・1 DAY AGO

ALAMOSA COUNTY, Colo. (CBS4) — Citing safety risk to personnel, Alamosa Volunteer Search And Rescue (AVSAR) leadership announced the suspension of search operations after four days of scouring the area around Blanca Peak to find a missing hiker. Durango resident Vaughn Fetzer, 57, was last heard from Sept. 18. He is believed to have attempted a summit of the 14,344-foot mountain by himself. Vaughn Fetzer (credit: Alamosa Volunteer Search and Rescue/Facebook) Thursday, AVSAR “made the very difficult decision” to take search teams out of the field until new information about Vaughn’s disappearance is obtained. (credit: Alamosa Volunteer Search and Rescue/Facebook) “AVSAR conducted this mission up...
ALAMOSA COUNTY, CO・1 DAY AGO
95 Rock KKNN

On Tuesday, Sept. 21, a 58-year-old Boulder man got caught up in strong winds while paragliding just before 12:30 p.m. The strong gusts ultimately resulted in the paraglider crashing into a hill just west of Wonderland Lake. According to the release from the Boulder County Sheriff's Office, shortly after launching,...
BOULDER, CO・7 HOURS AGO
KDVR.com

This weekend will be sunny, dry and warm both days. Highs will reach the middle 80s across metro Denver on Saturday, which is about 10 degrees above normal.
DENVER, CO・10 HOURS AGO
CBS Denver

After Weeks Of Improvement, Drought In Colorado Is Getting Worse Again

DENVER (CBS4) – After improvements to the drought situation in Colorado through most of the summer, the weekly drought monitor released Thursday morning showed a sharp increase in abnormally dry areas. A week ago 52% of Colorado was classified as abnormally dry which is the precursor to bona fide drought. This week the number has jumped to 65% including the entire Denver, Boulder, and Fort Collins areas which was void of any drought category from June through August. (source: CBS) Also troubling is the lack of any recent improvement to the extreme and exceptional drought which has plagued northwest Colorado since August 2020. The...
COLORADO STATE・9 DAYS AGO
St. Louis Post-Dispatch

FLAGSTAFF, Ariz. (AP) — The U.S. government released projections Wednesday that indicate an even more troubling outlook for a river that serves 40 million people in the American West. The Bureau of Reclamation recently declared the first-ever shortage on the Colorado River, which means Arizona, Nevada and Mexico will get...
SAINT CHARLES COUNTY, MO・2 DAYS AGO
Chippewa Herald

FLAGSTAFF, Ariz. (AP) — The U.S. government released projections Wednesday that indicate an even more troubling outlook for a river that serves 40 million people in the American West. The Bureau of Reclamation recently declared the first-ever shortage on the Colorado River, which means Arizona, Nevada and Mexico will get...
POLITICS・2 DAYS AGO