Altcoins like dogecoin and shiba inu coin drove a 54% surge in crypto users in the 2nd quarter, data shows 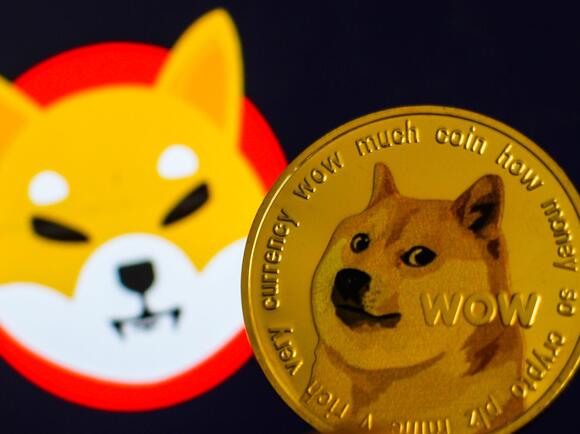 The popularity of altcoins like dogecoin and shiba inu coin drove a 54% surge in cryptocurrency users in the second quarter, data from exchange Crypto.com shows.

At the end of June, there were 221 million users compared to the 132 million towards the end of April.

Altcoins have gained traction in recent months thanks to the massive returns they promise due to wild price swings compared to older and more established digital assets, such as bitcoin and ether .

Both coins, which bear a shiba inu dog as their symbols, have gotten some semblance of approval from the wider crypto community.

Overall, the cryptocurrency space has been rapidly evolving as more institutions embrace digital assets. It took just four months to double the global cryptocurrency user base from 100 million to 200 million, whereas it took years before the 100 million milestone was even reached, according to data.

The second half of 2021, in particular, saw an acceleration in cryptocurrency adoption due to a confluence of events, from heavyweights such as Tesla accepting bitcoin as a mode of payment (a move it has since reversed ) to MicroStrategy 's continued investment in the cryptocurrency. El Salvador made history earlier this year as the first country in the world to adopt bitcoin as legal tender.

These innovative stocks have been hit by short-term concerns, yet their outlooks remain as bright as ever. For nearly 18 months, investors have enjoyed a historic bounce-back rally in the stock market. After losing 34% in roughly a month during the first quarter of 2020, the benchmark S&P 500 has since doubled in value.
STOCKS・13 HOURS AGO
Benzinga

Shiba Inu Coin is on a hot streak today! With the cryptocurrency trending high in social media, less than a day after Coinbase Global launched trading of their dogecoin copycat coin.
20 HOURS AGO
Motley Fool

Find out why Fantom has posted significant gains this year. Smart contract cryptocurrency Fantom (FTM) has gained almost 7,000% since the start of this year -- even more than the popular crypto Dogecoin (DOGE). Fantom reached an all-time high of $1.93 on Sept. 9, according to CoinMarketCap data. At that point, if you'd have bought $1,000 of Fantom on January 1, it would have been worth almost $100,000.
STOCKS・1 DAY AGO

$1.2B of ETH Disappeared From Exchanges Yesterday — Or Did It?

Ethereum (CRYPTO: ETH) on-chain metrics are painting a rather bullish picture as exchanges hold less and less of the coin's supply. What Happened: According to a Thursday tweet by on-chain data firm IntoTheBlock, the net amount of Ether leaving centralized cryptocurrency exchanges just hit a new record of more than $1.2 billion on Sept 15. The last time this metric reached over $1 billion, Ethereum's price increased by 60% within 30 days.
COMMODITIES & FUTURE・1 DAY AGO
New York Post

The noise surrounding the $2.2 trillion crypto industry often drowns out the reality that we are on the verge of something revolutionary. If things go right, crypto and the blockchain technology could usher in the next Internet revolution. Things are now going terribly wrong. The US stands the very real...
MARKETS・21 HOURS AGO
Markets Insider

Solana's network crashed this week, but developers say the DeFi altcoin is still on track to succeed as an alternative to ethereum

Here's why one developer chose to build his decentralized project on solana-and why he's not worried about the network's outage earlier this week.
MARKETS・1 DAY AGO
dailyhodl.com

The cryptocurrency meme Shiba Inu (SHIB), founded in August 2020, has become listed on Coinbase, the largest digital currency exchange platform in the US, and on Friday it soared 27% after its debut in the crypto market North American. Coinbase I agree Shiba Inu this Thursday, allowing its users to...
COMMODITIES & FUTURE・20 HOURS AGO
Benzinga

THE Shiba Inu coin has spiked up in value as its rival DogeCoin drops. The value of the Shiba Inu coin has risen 21.3 percent this week and 21.1% in the last 24 hours. Meanwhile, the “meme” Dogecoin has gone down 5.8 percent over the last week. However, Dogecoin is...
COMMODITIES & FUTURE・1 DAY AGO
Markets Insider

Cardano founder Charles Hoskinson discusses 'bitcoin maximalism', how DeFi needs to turn into 'real-fi' and his plans for digital transformation in Africa in a recent interview. Here are the 10 best quotes

Cardano founder Charles Hoskinson believes no one blockchain will dominate the crypto sector, but rather, there will be an "internet of blockchains."
MARKETS・1 DAY AGO
GOBankingRates

Comparing Dogecoin, Baby Doge and Shiba Inu: Is There One To Watch?

Bitcoin has been the most popular and well-known cryptocurrency since it literally began the asset class in 2009. However, as speculative fervor has broken out among many markets over the past few...
MARKETS・2 DAYS AGO
MarketWatch

Fake news appeared to be giving holders of virtual currencies very real agita on Monday, as a hoax news release sent litecoin briefly soaring before crumbling back down to Earth.
MARKETS・1 DAY AGO
dailyhodl.com

Crypto Asset That Surged More Than 8,600,000% This Year Now Listed on Coinbase

Coinbase is continuing its recent spree of listing new crypto assets by adding support for a popular Dogecoin (DOGE) copycat. The exchange’s newest addition is Shiba Inu (SHIB), a meme token that aims to be an Ethereum-based alternative to DOGE. The 47th-ranked asset by market cap was trading at $0.00000000008...
STOCKS・2 DAYS AGO
cryptoslate.com

Shiba Inu coin (SHIB) believers were in for a surprise Friday morning after Coinbase, one of the world’s largest and most regulated crypto exchanges, listed the memecoin on its platform. “SHIB is now live on Coinbase and in the Coinbase iOS and Android apps. Coinbase customers can log in now...
STOCKS・1 DAY AGO
GOBankingRates

Crypto and 5 Other Groundbreaking Investing Trends for Gen Z

Generation Z is loosely defined as those ages 24 and under. As most of this generation is either just finishing up school or working in their first jobs, they may not have extensive investment...
MARKETS・1 DAY AGO
The US Sun

THE price of Bitcoin is up to $48638.99 today after it rose 8.66percent in the past seven days. It comes as Shiba Inu coin has spiked up in value as its rival DogeCoin drops. The coin has risen by 35 percent this week. Meanwhile, the "meme" Dogecoin has gone down...
CURRENCIES・1 DAY AGO
FXStreet.com

Shiba Inu gets listed on Binance.US, SHIB price recovers from the loss posted over the past week. The Shiba-Inu-themed token is one of the top 10 most mentioned cryptos on Twitter alongside BTC, ETH, DOGE, ADA. Shiba Inu CEO reveals that Shibarium, Shiba L2 using Bone as native token, is...
COMMODITIES & FUTURE・3 DAYS AGO
MarketWatch

Here’s what leaders at Coinbase, FTX, BlockFi and other crypto companies are saying about regulation

“The CFTC has been much faster to weigh in and offer guidance and thoughts...I think there's been some criticism of the SEC, " said Sydney Schaub, chief legal officer at crypto exchange and stablecoin issuer Gemini.
MARKETS・2 DAYS AGO