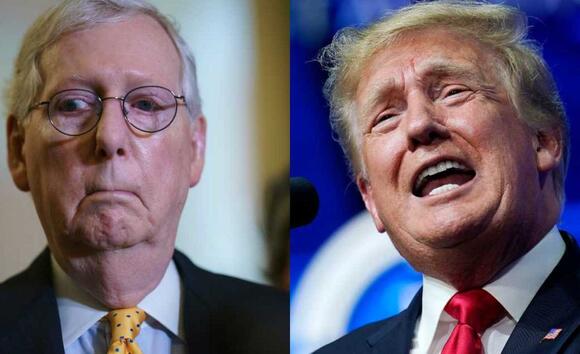 "Under the weak leadership of Mitch McConnell, Senate Republicans continue to lose. He lost Arizona, he lost Georgia, he ignored Election Fraud and he doesn’t fight," Trump said Thursday. "Now he’s giving Democrats everything they want and getting nothing in return."

"No deal is better than a bad deal. Fight for America, not for special interests and Radical Democrats," it continued. " RINOs are ruining America, right alongside Communist Democrats."

McConnell will vote to advance President Joe Biden's infrastructure bill that many in the GOP have opposed , he said Wednesday.

"Based on a commitment from Leader Schumer to Senators Portman and Sinema that the Portman-Sinema amendment to be filed will be the substitute amendment, I will vote to proceed to the bipartisan infrastructure bill," McConnell wrote on Twitter.

McConnell's support means the bill will likely have enough Republican backing to advance. A final vote could occur within the next two weeks.

The legislation would provide nearly $550 billion to repair infrastructure. Expenses will be covered by unspent coronavirus relief funds, new cryptocurrency tax collections, and other sources of revenue, according to the White House .

It is the product of a monthlong negotiation between the Biden administration, Senate Republicans, and Senate Democrats.

trump, you are an EX president and your input into anything is totally irrelevant. You are a has been!

The latest in the political war between Trump and members of the Republican establishment as he seeks to maintain his control of the party.
POTUS・23 HOURS AGO
Newsweek

The House panel probing the Capitol attack is readying a wave of subpoenas and already getting results from its document requests.
DALLAS, TX・15 HOURS AGO

Republicans are furious over moves quietly made by Democrats on the House Rules Committee that have stymied congressional abilities to conduct oversight of the executive branch. Efforts to probe the Biden administration on matters relating to the chaotic withdrawal of Afghanistan and the crisis at the southern border have been...
PRESIDENTIAL ELECTION・16 HOURS AGO
WashingtonExaminer

Just 247 days since President Joe Biden took the keys to the Oval Office, a majority of people appear to want him evicted and former President Donald Trump back.
PRESIDENTIAL ELECTION・23 HOURS AGO
Newsweek

"We will fight the Subpoenas on Executive Privilege and other grounds, for the good of our Country," the former president said.
PRESIDENTIAL ELECTION・9 HOURS AGO
Fox News

Former Rep. Tulsi Gabbard, D-Hawaii, fresh off a deployment to Africa as a Major in the Army National Guard, told Fox News on Thursday that President Biden's Afghanistan and open-border policies have been "a disaster." Gabbard added that the recent indictment of Clinton-linked District of Columbia attorney Michael Sussmann by...
CONGRESS & COURTS・13 HOURS AGO

Angela Merkel blew off Biden when he tried to call her first after taking office, per the Wall Street Journal. Merkel brushed off the "symbolism" of Biden wanting to reach out to before other world leaders as "irrelevant." The snub from Merkel, who is stepping down as chancellor, shows disillusionment...
PRESIDENTIAL ELECTION・22 HOURS AGO
Newsweek

Will There Be a Government Shutdown? Congress Has 8 Days Until Deadline

"The debt limit is a shared responsibility, and I urge Congress to come together, in that spirit," House Speaker Nancy Pelosi wrote in a letter to members.
CONGRESS & COURTS・1 DAY AGO
Business Insider

A recent Washington demonstration supporting those charged with crimes for the Jan. 6 insurrection at the U.S. Capitol fizzled, with no more than 200 demonstrators showing up. The organizers had promised 700 people would turn out – or more. But the threat from far-right insurrectionists is not over. For months,...
PRESIDENTIAL ELECTION・1 DAY AGO

Lara Trump, a Fox News contributor, argued on "Fox & Friends" on Thursday that Joe Biden should visit the southern border amid "a complete crisis" and questions if "there is a bigger reason" as to why the president has not. LARA TRUMP: He [President Biden] is doing nothing down there....
PRESIDENTIAL ELECTION・1 DAY AGO
Insider

Flynn made the baseless claim on a conservative podcast, saying: "These people are seriously thinking about how to impose their will on us in our society, and it has to stop,"
PUBLIC HEALTH・1 DAY AGO
WashingtonExaminer

New Gallup low for Biden, even below Harris

How low can Joe go?
PRESIDENTIAL ELECTION・1 DAY AGO

Even former GOP treasury secretaries reportedly tried to get Mitch McConnell to help avoid a debt default. He refused.

Treasury Secs. Steve Mnuchin and Henry Paulson warned McConnell of the consequences of not raising the debt ceiling as the US approaches default.
CONGRESS & COURTS・1 DAY AGO
NBC News

Former President George W. Bush will hold a fundraiser next month for Rep. Liz Cheney, the Wyoming Republican whom former President Donald Trump has been urging Republicans to defeat in a primary next year. Bush is scheduled to host the event for Cheney — the daughter of his former vice...
PRESIDENTIAL ELECTION・1 DAY AGO
USA TODAY

Breaking with Trump, Biden doesn't have an immigration czar. Is it a 'vacuum'?

Several true but easy conclusions suggest themselves regarding two stories out this week about the Trump campaign’s attempts to overturn last year’s presidential election. Rather than just look backward, though, let’s focus forward toward a cure. The cure would be one that everybody on the political spectrum should agree on,...
PRESIDENTIAL ELECTION・1 DAY AGO