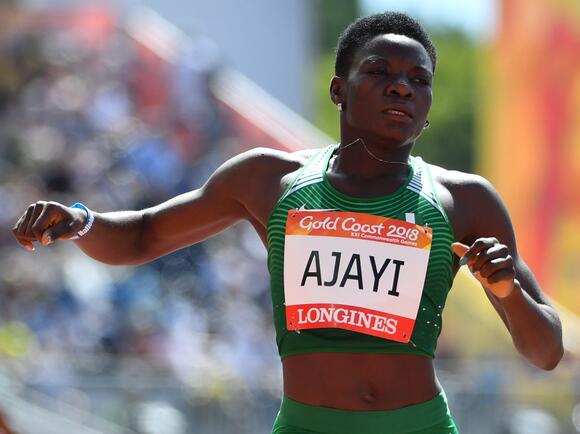 Ten Nigerian athletes will be sent home from the Tokyo Olympics after authorities "dropped the ball" and failed to administer enough drugs tests, it was revealed on Wednesday.

The Athletics Integrity Unit (AIU) ruled that the competitors, all of whom have already travelled to Japan, will be unable to take part in the Games because of non-compliance with out-of-competition drug testing requirements.

10 athletes from five other countries - Belarus, Ethiopia, Kenya, Morocco, and Ukraine - have also been ruled ineligible to compete.

The AIU said that in the lead up to major sporting events, athletes from countries deemed to have the highest doping risk must undergo "at least three no-notice out-of- competition tests" across the span of three weeks in the 10 months leading up to the event.

The anti-doping framework is known as "Rule 15."

"Nigeria is the most affected country, not meeting the minimum testing requirements under Rule 15 for 10 athletes," the AIU said.

"Nigeria was included in Category A at the start of 2020 following a continued period of weak domestic testing levels."

Rosemary Chukwuma is one of the Nigerian athletes who has been sent home. Her coach, Wes Kittley, said the Athletics Federation of Nigeria (AFN), was to blame.

"The bottom line is the Nigeria federation just dropped the ball and didn't test those kids," he said, according to BBC Sport.

"It's just a terrible thing if they don't get to compete because the Nigerian federation never sent anyone to test them. Which will be unfortunate. My goodness."

The AFN itself agrees with Kittley, taking full responsibility for the ejection of its athletes.

"The AFN bears responsibility for any lapses that may have occurred during the process and reassures Nigerians that our performances will not be negatively impacted," the organization said in a statement, per BBC Sport.

"All our athletes resident in Nigeria and who qualified for the Olympic Games completed the three mandatory tests.

"Most of our top athletes resident in the USA also completed their tests. However, a few athletes in the American collegiate system were tested, but those tests were deemed not to have complied with WADA (World Anti-Doping Agency) sample collection and analysis standards."

The AFN added that none of the athletes sent home had "tested positive to prohibited substances."

That is a shame, it is pretty evident after reading several of these type of stories that some of these countries that do not have a robust Olympic Training Program need help and the IOC should share in the responsibility to ensure the integrity of these programs and their Athletes.

This is horrible, because these athletes 4 yrs of work or less,, was done all for nothing..This is so unacceptable for these wonderful athletes and shame on the people who failed them.

A woman flew to Nigeria to directly confront her internet scammer. And now, they're friends.

The relationship that has developed between artist Maria Grette, originally from Sweden, and "Johnny," a former Nigerian scammer, has a very bizarre beginning. But, in the end, it's a heartwarming lesson about human potential.
PUBLIC SAFETY・1 DAY AGO
The Independent

England Women have started Sarina Wiegman’s reign as boss in style, with a 8-0 thumping of North Macedonia.Ellen White and Beth England netted twice apiece in the World Cup qualifier, with Ella Toone and Beth Mead also on the scoresheet along with a pair of own goals.The Lionesses face Luxembourg on 21 September and Northern Ireland two days later in further Group D matches.More to follow...
SPORTS・1 DAY AGO
The Independent

England move up to third in Fifa world rankings

England have moved into the top three of the Fifa rankings for the first time in nine years following their results during the September international break.Having sat fourth in the standings since April 2019, the Three Lions leapfrogged world champions France to move up to third in the list released on Thursday.Belgium remain top-ranked with Brazil still in second but Gareth Southgate’s side are now in the top three, matching their best-ever position within the ranking system.They held onto third place for August and September in 2012 under Roy Hodgson and have now amassed enough points to regain a spot...
FIFA・2 DAYS AGO