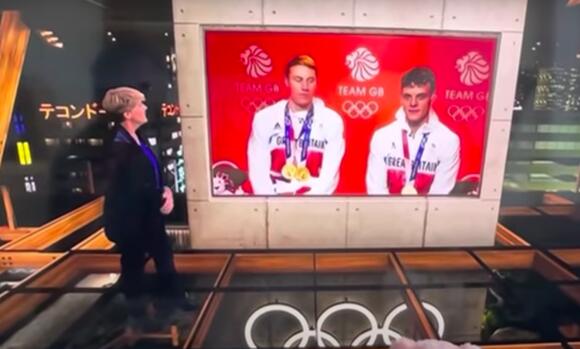 It’s very easy to slip into an accidental double-entendre, especially on national TV, and even veteran broadcasters like Clare Balding are guilty of it - as proven by what happened at the Olympics on Wednesday.

After Team GB won the men’s 4x200 metre relay in the pool in Tokyo, swimmers Tom Dean and Matthew Richards, who won the race along with James Guy and Duncan Scott were interviewed by Balding.

Unfortunately, the interview will probably live long in the memory for the wrong reasons as Balding made an accidental reference to Richards’ “third leg,” as in the third leg of the race, not you know what.

Neither Richards nor Dean could keep a straight face and briefly smirked but were able to maintain their composure which is probably good news for all involved.

Balding’s very minor but amusing slip-up didn’t go unnoticed though from viewers who pointed out the embarrassing moment on Twitter.

It’s a good job the Olympics only comes around every four (or should we say five years) otherwise we can imagine this type of thing would be happening all the time!

how do u expect teen boys to react to that? I'm a grown woman and I would have had to hold back a chuckle too🙃

Emma Raducanu has revealed what her first purchase will be after pocketing $2.5m (£1.81m) from her sensational US Open win...and it's not what you'd expect. Maybe a nice house, or a cheeky upgrade from your Fiat Cinquecento?. Nope. According to Metro, the 18-year-old told ESPN that the first thing she...
TENNIS・7 DAYS AGO
Life and Style Weekly

Dedicated. Olympic gymnast Simone Biles revealed that she has “never” cheated on a partner before during an Instagram Q&A session on Wednesday, September 1. Amid a “Never Have I Ever” game with fans via her Instagram Stories, the 24-year-old responded to a follower’s inquiry as to whether or not she has ever been unfaithful in a relationship. She circled “no” on the Q&A template photo she was using for the questions and added, “Too loyal [and] WAY too obsessed.” She also included the loved-up, sparkle and woozy face emoji.
NFL・16 DAYS AGO
The Independent

Emma Raducanu: Why the British tennis star’s parents were not at the US Open final

Britain finds itself well and truly in the grip of Raducanumania this weekend after teenage tennis star Emma Raducanu beat Leylah Fernandez of Canada to become Britain’s first female singles Grand Slam champion for 44 years.Raducanu is also the youngest Grand Slam finalist since Maria Sharapova won Wimbledon in 2004 and the first British woman to reach that height since Virginia Wade won that same tournament in 1977.Raducanu was actually born in Ontario, Canada, on 13 November 2002 to Ian and Renee Raducanu, Romanian and Chinese finance industry professionals who subsequently relocated to London when their daughter was just...
TENNIS・7 DAYS AGO
The US Sun

PIERS MORGAN has been ripped by tennis fans for hailing ‘superstar’ Emma Raducanu and her US Open success. That’s after he slammed the British teen for her Wimbledon withdrawal in July. Raducanu became her country’s new No 1 today as she beat Belinda Bencic to reach the US Open semis.
TENNIS・10 DAYS AGO

Simone Biles opened up about the injury on Instagram, saying she immediately felt the rib "crack" but continued to perform anyway.
CELEBRITIES・15 DAYS AGO
Insider

"If I work on my game and pull it together, then maybe it will happen one day," Raducanu told journalist Jeanette Kwakye.
TENNIS・2 DAYS AGO
Insider

Inside the fascinating life of US Open champion Emma Raducanu, who loves motorsports and is fluent in Mandarin

Emma Raducanu, 18, is the biggest name in tennis right now having won just the US Open without dropping a single set.
TENNIS・1 DAY AGO
Telegraph

Meet the team behind Emma Raducanu's remarkable run to US Open finalist, including her new coach

After yet another incredible performance in the US Open last eight on Wednesday Emma Raducanu praised her “amazing team” with her in New York. Now the British teen has reached the US Open final - becoming the first British woman to earn a place in a major final since Virginia Wade won Wimbledon in 1977.
TENNIS・9 DAYS AGO

In the aftermath of the Olympics, amid a whirl of disappointment and relief, Noah Lyles spoke with his sports therapist. Lyles had expected to win a gold medal in the 200 meters in Tokyo and instead won bronze, his race a precursor to an emotional outpouring. As he unpacked how he felt a letdown, his therapist surprised him. “I don’t think you should have won that medal,” she told him.
SPORTS・10 DAYS AGO
Sports Illustrated

The retiring legend scored early and often in a 9-0 rout of Paraguay.
SOCCER・2 DAYS AGO
WLKY.com

UofL Olympic swimmer has another passion: Improving his cooking skills

LOUISVILLE, Ky. — University of Louisville graduate Zach Harting has spent a lot of his life in a pool. It paid off this summer when he competed at the Summer Olympics in Tokyo. "I would not going to say the experience of a lifetime because we’re hoping that we get...
LOUISVILLE, KY・12 DAYS AGO

What Olympics are all about

To be totally candid, I avoided watching this summer’s Olympics like the plague — not because I had a sudden aversion to world-class sports and seat-of-your-pants competition, but because I had no desire to see the tantrums of spoiled, entitled athletes spitting on and protesting the very country that gave them all the opportunities in the world.
COMBAT SPORTS・11 DAYS AGO
The Independent

Adam Peaty interview: ‘My obsession with sport and progression is unhealthy – I needed a rest’

In the months before Tokyo, Adam Peaty experienced something new and a little unnerving. Unlike the build-up to his first Olympics in Rio, he experienced days when he didn’t want to get out of bed at 6am to train, or force down his 8,000 calories, or feel his muscles burn in the gym. There were times when he didn’t want to swim any more. Peaty had always been absorbed by what he calls “the pursuit of excellence”. He saw pain as an occupational hazard, a temporary side-effect that dissipated and left behind a minuscule gain. That’s how he knew he...
SPORTS・2 DAYS AGO
The Guardian

‘The talent of the century’: Klopp salutes Emma Raducanu after US Open title

Ugo Monye: Who is the Strictly Come Dancing 2021 contestant and what is he famous for?

Rugby player and TV presenter Ugo Monye is among the celebrity contestants on this year’s series ofStrictly Come Dancing.Monye recently made his debut as part of the revamped A Question of Sport as a team captain opposite former Olympic gold medal winning hockey player, Sam Quek. Paddy McGuinness joined them as the new host, replacing Sue Barker.Before his TV career, Monye played rugby union for Harlequins and went on to be capped by England 14 times.Born in Islington, London, Monye was a standout athlete from an early age. He competed in the 100m at the English Schools’ Championships, placing fifth....
CELEBRITIES・1 DAY AGO
The Independent

Daniel Bell-Drummond and Darren Stevens propelled Kent into the Vitality Blast final and a showdown with Somerset on Saturday night after a 21-run victory over Sussex at Edgbaston.Bell-Drummond took centre stage at the top of the order with a stylish 82 from 51 balls while Stevens, who won this competition with Leicestershire in 2004, showed plenty of guile to help Kent post 168 for eight.The 45-year-old struck 47 not out from 28 balls and then snared David Wiese with his first ball in the reply, with Sussex’s chase undermined by the regular clatter of wickets as they stumbled to 147...
SPORTS・18 HOURS AGO
The Independent

Lee Westwood doesn’t make a habit of indulging in the past. The bedrock of the 48-year-old’s remarkable longevity has always been an insistence on looking forwards and refusing to rest on his laurels, even after he scaled golf’s peak over a decade ago. But for one of the Ryder Cup’s great statesmen, who has been front and centre in seven winning European teams, the sensations of nostalgia are still impossible to resist.
GOLF・4 HOURS AGO