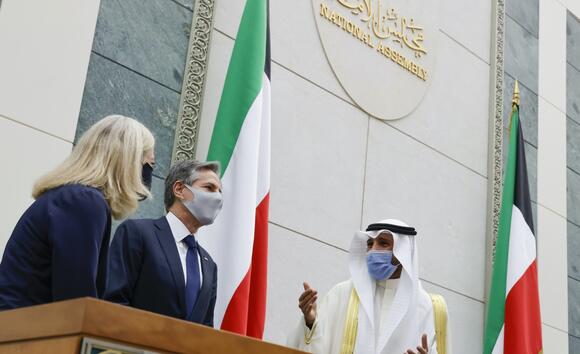 KUWAIT CITY — Iranian officials have a closing window of opportunity to negotiate a restoration of the 2015 nuclear deal and the lifting of U.S. sanctions, Secretary of State Antony Blinken warned.

“The fact of the matter is that it is Iran that has decisions to make,” Blinken told reporters at the Kuwaiti foreign ministry. “This process cannot go on indefinitely.”

Blinken marked the 30th anniversary of the liberation of Kuwait from Iraqi invaders, just days after President Joe Biden announced the impending end of the U.S. combat mission in Iraq. The renewal of the 2015 Iran nuclear deal is central to Biden's broader U.S. policy for the Middle East, but negotiations have stalled, with Iranian officials balking at the U.S. effort to use the nuclear talks as the first part of a broader negotiation over the regime's non-nuclear aggression.

“By putting this sentence, they want to provide an excuse for their further interventions on the principle of (the deal) and missile program and regional issues,” Iranian Supreme Leader Ayatollah Khamenei said Wednesday. “If Iran refuses to discuss them, they will say that you have violated the agreement and the agreement is over.”

U.S. and Iranian officials have conducted several rounds of "indirect" talks in Vienna, mediated by the other signatories of the original 2015 Iran nuclear agreement. But Blinken emphasized Thursday that Biden's desire to return to the pact is dwindling with the passage of time, because the value of the 2015 deal diminishes as Iranian officials continue their policy of ramping up their nuclear program in response to former President Donald Trump's decision to exit the deal and renew sanctions on the regime.

"We will see what Iran is ready to do or not ready to do," Blinken told reporters, adding that the U.S. is "fully prepared" for additional meetings in Vienna. "But as I said, this process cannot and will not go on forever.

Russia says it's in sync with US, China, Pakistan on Taliban

The United States China, Russia and Pakistan are working together to ensure that Afghanistan’s new Taliban rulers keep their promises, especially to form a genuinely representative government and prevent extremism from spreading, Russia’s foreign minister said Saturday. Sergey Lavrov said representatives from Russia, China and Pakistan had traveled to the Qatari capital of Doha and then to Afghanistan’s capital Kabul to engage with both the Taliban and representatives of “secular authorities” — former president Hamid Karzai and Abdullah Abdullah, who headed the ousted government’s negotiating council with the Taliban.Lavrov said the interim government announced by the Taliban does...
FOREIGN POLICY・1 DAY AGO
AFP

Israel's Prime Minister Naftali Bennett said Monday that Iran had breached all the "red lines" aimed at curbing its nuclear weapons program but that Israel "will not allow" Tehran to get the bomb. "Iran's nuclear weapon program is at a critical point, all red lines have been crossed," said Bennett, who took office in June.
MIDDLE EAST・1 HOUR AGO
Newsweek

"It leaves an unpleasant taste of being disdained and sidelined," said Pierre Vimont, a former French ambassador to the United States.
U.S. POLITICS・2 DAYS AGO
Times Daily

UNITED NATIONS (AP) — Iran’s new foreign minister said Friday the country will return to nuclear negotiations “very soon,” but accused the Biden administration of sending contradictory messages — saying it wants to rejoin the 2015 nuclear deal while slapping new sanctions on Tehran and not taking “an iota of positive action.”
MIDDLE EAST・2 DAYS AGO

Biden needs India to counter China, but it comes with a cost

Narendra Modi's troubling brand of democracy is a human rights challenge for the White House.
WASHINGTON, DC・3 DAYS AGO
AFP

Blinken sees unity on Taliban after talks with Pakistan, China

US Secretary of State Antony Blinken said Thursday he believed the world was united on pressing the Taliban after speaking with Pakistan, China and Russia, key players with Afghanistan's new rulers. Blinken met Thursday on the sidelines of the UN General Assembly with his counterpart from Pakistan, the chief ally of the Taliban regime that was toppled by US troops in 2001, and held talks with ministers of the four other veto-wielding Security Council members including China and Russia on Wednesday evening. "I think there is very strong unity of approach and unity of purpose," Blinken told reporters. "The Taliban says that it seeks legitimacy, that it seeks support, from the international community. The relationship that it has with the international community is going to be defined by the actions it takes."
FOREIGN POLICY・3 DAYS AGO
AFP

The United States said Thursday that Iran has given no hint that it wants to return to stalled talks over reviving the Iranian nuclear deal. "For now, certainly there's no indication, positive indication that Iran is prepared to come back... and to try to close down the remaining issues," a senior US official said. Western nations are trying to build momentum at the UN General Assembly in New York this week to kickstart the accord. Then-president Donald Trump pulled America out of the deal in 2018, reinstating sanctions on Iran that Washington had lifted as part of the agreement.
U.S. POLITICS・3 DAYS AGO
fox40jackson.com

The State Department is becoming frustrated with Iran refusing to say when they may re-enter nuclear talks, officials told Fox News Thursday, though Secretary of State Antony Blinken has not yet set a date for when U.S. patience will run out. The last round of high-level talks took place in...
U.S. POLITICS・3 DAYS AGO

WASHINGTON/UNITED NATIONS, Sept 23 (Reuters) - The window is still open to revive the 2015 Iran nuclear deal but won't be forever, a senior U.S. official said on Thursday, saying Iran has yet to name a negotiator, set a date for talks or say whether it would resume where they left off in June.
U.S. POLITICS・3 DAYS AGO
abc17news.com

UNITED NATIONS (AP) — The European Union’s top diplomat has urged Iran to return to talks on its nuclear program while the country’s foreign minister reiterated Tehran’s “willingness to resume negotiations.” The last round of talks ended in June, ahead of Iran’s elections that boosted the ranks of hard-liners. Iran’s new leaders have come under renewed pressure to resume talks. The EU said on Wednesday that its foreign policy chief, Josep Borrell, and Iranian Foreign Minister Hossein Amirabdollahian met the previous day on the sidelines of the U.N. General Assembly’s gathering in New York.
MIDDLE EAST・4 DAYS AGO
Reuters

Iranian officials said Tuesday they expect nuclear talks with world powers to resume in the "next few weeks," but they signaled they would take a tougher stance against the U.S, per the state-run IRNA news agency. Why it matters: The talks to salvage the 2015 Iran nuclear deal have been...
MIDDLE EAST・5 DAYS AGO

Iranian Foreign Ministry spokesperson Saeed Khatibzadeh announced on Tuesday that talks on reviving the 2015 nuclear deal will resume ?in the next few weeks,? after negotiations stalled earlier this year. The talks, which have been taking place in Vienna, have already gone through five rounds of discussions with no agreement...
MIDDLE EAST・5 DAYS AGO
albuquerquenews.net

Iran said talks with parties to the 2015 nuclear accord would resume in a few weeks, although there would be no meetings with world powers on the sidelines of the UN General Assembly in New York this week. The statement by Iranian Foreign Ministry spokesman Saeed Khatibzadeh came as U.S....
MIDDLE EAST・5 DAYS AGO
Washington Post

Three months after the last meeting to negotiate a revival of the nuclear deal between Iran and world powers, it remains unclear if and when the talks in Vienna will restart, or who might represent its new government. In the interim, Iran has continued to expand the quantity and quality...
MIDDLE EAST・5 DAYS AGO
US News and World Report

World Powers to Meet With Iran at U.N. to Push for Return to Nuclear Talks -France

NEW YORK (Reuters) - Ministers from Britain, China, France, Germany and Russia will meet with Iran at the United Nations later this week to try to give fresh momentum to stalled talks over reviving a 2015 nuclear deal, France's foreign minister said on Monday. A sixth round of indirect talks...
WORLD・6 DAYS AGO
mix929.com

Iran's new president, Ebrahim Raisi, took office this summer signaling that his government would return to the nuclear negotiating table. But so far he appears to be in no rush. CBS News senior foreign correspondent Elizabeth Palmer reports.
POTUS・13 DAYS AGO
Reuters

VIENNA, Sept 12 (Reuters) - The U.N. atomic watchdog reached an agreement with Iran on Sunday to solve "the most urgent issue" between them, the overdue servicing of monitoring equipment to keep it running, raising hopes of fresh talks on a wider deal with the West. International Atomic Energy Agency...
WORLD・14 DAYS AGO
AFP

India said Friday that US President Joe Biden and other leaders agreed to keep a careful eye on Pakistan, adding that its historic rival has been an "instigator" of trouble in Afghanistan. Prime Minister Narendra Modi held his first in-person meeting with Biden and then took part in a broader "Quad" summit with the leaders of Australia and Japan. During the talks, Modi shared concerns about extremist elements in Afghanistan after the Taliban's takeover last month, Indian officials said. "There was a clear sense that a more careful look and a more careful examination and monitoring of Pakistan's role in Afghanistan -- Pakistan's role on the issue of terrorism -- had to be kept," Foreign Secretary Harsh Vardhan Shringla told reporters after the White House talks. The Quad will keep track of the "important point which sometimes gets overlooked when you see Pakistan projecting itself as a facilitator whereas it has really been in many senses an instigator of some of the problems in our neighborhood and beyond," he said.
WORLD・2 DAYS AGO