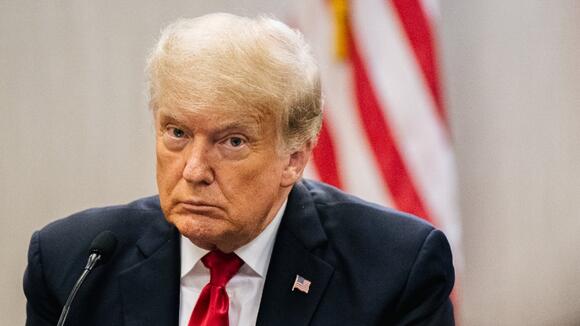 Former President Trump lashed out at Senate Republicans on Thursday after the upper chamber voted to take up debate on a bipartisan infrastructure package, accusing Senate Minority Leader Mitch McConnell (R-Ky.) and “RINOs,” short for "Republicans in name only," of surrendering to Democrats.

“Under the weak leadership of Mitch McConnell, Senate Republicans continue to lose,” Trump said in a statement. “He lost Arizona, he lost Georgia, he ignored Election Fraud and he doesn’t fight.”

“Now he’s giving Democrats everything they want and getting nothing in return,” he continued. “No deal is better than a bad deal. Fight for America, not for special interests and Radical Democrats. RINOs are ruining America, right alongside Communist Democrats.”

The former president’s attack on his party’s Senate leadership came a day after lawmakers voted 67-32 to greenlight a debate on the infrastructure deal, which includes $1.2 trillion for projects such as roads, bridges, public transit and broadband internet. The $1.2 trillion includes $579 billion in new spending.

While the infrastructure deal still faces a series of legislative hurdles, Wednesday’s vote was seen as a major win for President Biden , who had championed the negotiations between a bipartisan group of senators.

“This deal signals to the world that our democracy can function, deliver, and do big things. As we did with the transcontinental railroad and the interstate highway, we will once again transform America and propel us into the future,” Biden said in a statement.

The vote is also likely to raise questions about Trump’s influence over the policymaking process in his post-presidency. Prior to Wednesday’s vote, he had pushed Republicans to reject a deal with Democrats, saying that the compromise is “a loser for the USA, a terrible deal, and makes the Republicans look weak, foolish, and dumb.”

“It shouldn’t be done,” he said. “It sets an easy glidepath for Dems to then get beyond what anyone thought was possible in future legislation.”

the man is nuts. we need this infrastructure bill to boost our economy all across the country. if we don't do it now it's going to cost is more later.

So what,who cares!!!!Keep him out of the news until he is in handcuffs or.....STOP trying to make him relevant.He thrives on being in the limelight like a leech thrive on blood.

Guess what we don't care what Trump thinks. He is all about himself. Do what I say and do what i want days are over. Thank God he has no power and thank to Republicans who have morals and are working for the people not TRUMP.

Donald Trump was defeated by Joe Biden by 11,779 votes in Georgia, and officials have found no evidence of widespread voter fraud.
GEORGIA STATE・1 DAY AGO
Washington Post

The announcement came exactly as you might expect of a former star for the Ohio State Buckeyes: white text on a scarlet background, Rep. Anthony Gonzalez’s name on a gray background at the top. Its message was also one that would be familiar to Buckeye fans, given that it amounted to an unexpected loss.
POTUS・1 DAY AGO
Washington Times

House Transportation Committee Chairman Peter DeFazio is being accused of breaking a key pledge that President Biden made to Senate lawmakers to secure passage of his bipartisan $1.2 infrastructure bill. Mr. DeFazio, Oregon Democrat, is maneuvering to include pet projects and partisan priorities within Mr. Biden‘s $3.5 trillion expansion of...
CONGRESS & COURTS・1 DAY AGO
Washington Post

It has been widely accepted for a long time that Donald Trump rules the Republican Party by fear. What’s been less examined — but should be — is how much it’s not just fear of political peril. Rep. Anthony Gonzalez (R-Ohio) on Thursday night became the latest high-profile Trump critic...
POTUS・1 DAY AGO

"The Republican Party will not get better unless you stand up," the congressman said in a message to fellow GOP lawmakers on Saturday.
PRESIDENTIAL ELECTION・6 HOURS AGO
POLITICO

As Democrats charge ahead with writing their massive $3.5 trillion spending bill, which they aim to pass on a party-line vote through budget reconciliation, at least one moderate Republican is warning the bipartisan infrastructure bill may lose GOP votes because it's too intertwined with the reconciliation bill. "I think Nancy...
CONGRESS & COURTS・2 DAYS AGO

Biden is priming the pump for Trump Part Deux

Let’s be clear: For most people Joe Biden was not elected last November to get us out of Afghanistan. His election was not a blank check to oversee a dramatic expansion of the federal government. His victory wasn’t even wholly about halting the spread of the Covid-19 pandemic, although surely that was top of mind for many voters at the […]
PRESIDENTIAL ELECTION・2 DAYS AGO
Newsweek

While Republicans are blaming Democrats for reckless spending, about $7.8 trillion of the overall national debt was accumulated under President Donald Trump.
PRESIDENTIAL ELECTION・2 DAYS AGO
POLITICO

CALIFORNIA SPLIT — Remember this moment, because it might be a point of no return. The aftermath of today’s California recall vote appears likely to herald the arrival of a new stage of election trutherism, in which large numbers of voters — and candidates — insist ordinary elections are rife with fraud and refuse to acknowledge the legitimacy of the outcome.
CALIFORNIA STATE・4 DAYS AGO
Boston Globe

For those who pay more than lip service to democracy, and thus realize both its value and fragility, one barometric question this year has been whether the Republican Party will come to its senses regarding Donald Trump and Trumpism. Over the last half-decade, it was disquieting to watch as one...
PRESIDENTIAL ELECTION・4 DAYS AGO

"I find myself in an impossible situation," protested Rep. Stephanie Murphy, D-Fla., last Thursday afternoon. The Florida Democrat is a moderate. A leader of the fiscally-conscious Blue Dog Coalition. And, Murphy’s "impossible situation" crystallized the plight facing congressional Democrats in their quest to pass the $3.5 trillion social spending bill.
CONGRESS & COURTS・3 DAYS AGO
Washington Post

It makes for uncomfortable TV. Republicans get really grumpy. Republicans who enabled former president Donald Trump right up to the 2020 election — or beyond — do not like to admit complicity in the rise of a dangerous authoritarian movement. That, however, does not mean the rest of us should forgive and forget.
POTUS・5 DAYS AGO
laconiadailysun.com

One Year Away From Election, Trump’s Influence Looms Over GOP Race For N.H.’s First District

A large class of young Republicans have already declared they’re running to replace Democrat Chris Pappas in the first Congressional District. Although Pappas hasn’t said whether he’ll run for reelection, the district is competitive and has flipped between Republican and Democratic control. Get NHPR's reporting about politics, the pandemic, and...
PRESIDENTIAL ELECTION・8 DAYS AGO

House Republicans could face increased pressure to vote against a bipartisan infrastructure package when they return to Washington later this month with outside groups and conservatives already ramping up the campaign against a $1.2 trillion package they say would be akin to writing Democrats a blank check to restructure the social safety net. The dynamic in the House is far […]
CONGRESS & COURTS・10 DAYS AGO
Fortune

Subscribe to Fortune Daily to get essential business stories straight to your inbox each morning. The White House is warning state and local governments about severe cuts to disaster relief, Medicaid, infrastructure grants, school money and other programs if Congress fails to raise the U.S. debt limit. A fact sheet...
POTUS・1 DAY AGO
CBS Austin

WASHINGTON (SBG) - Republicans say there is no way they will join to raise or suspend the debt ceiling, increasing the legal limit on the total amount of debt lawmakers borrow. “This is a unified Democrat government engaging in a partisan reckless tax spending spree. They will have to raise...
CONGRESS & COURTS・1 DAY AGO
Newsweek

The Democrat defeated the effort to remove him, but his chances of becoming president appear unchanged.
CALIFORNIA STATE・2 DAYS AGO