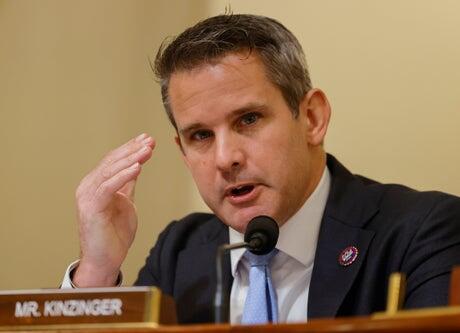 Adam Kinzinger , a member of the US House of Representatives who belongs to the Republican party, has revealed that several of his party colleagues have privately shown him their support for his stance on the 6 January Capitol riots.

Mr Kinzinger is one of the only two Republicans on a select committee formed by the House of Representatives to investigate the insurrection.

“There’s a lot of people, you know. They come up and say it,” Mr Kinzinger told CNN’s Wolf Blitzer in an interview. “It’s not any of the ones that go on TV and spout the ‘Big Lie’ and then say it. It’s the ones that are staying more quiet that I think appreciate the stand. But it’s a lot,” he added.

He also pointed out that “nobody actually believes” former president Donald Trump ’s claims of the 2020 election being stolen from him.

Mr Kinzinger also discussed how Fox News allegedly mocked him for breaking down during the select committee’s first meeting, where he addressed four police officers who witnessed the insurrection and defended the Capitol building from the rioters.

Fox News hosts Tucker Carlson and Laura Ingraham had reportedly mocked Mr Kinzinger hours after the hearing. Mr Kinzinger pushed back on their remarks during the interview, dubbing them to be “a very cold-hearted thing”.

“That personality on that television show, I don’t think has ever served in uniform a day in his life,” Mr Kinzinger told CNN, in an apparent reference to Tucker Carlson. “I would argue that is a very cold-hearted thing. Or it’s just simply driven on expanding your cold-hearted personality for ratings.”

During the hearing on Tuesday, Mr Kinzinger stated the committee’s mission was “to find the truth and it is to ensure accountability.” He also commented on how the Republicans’ perception of the committee was an unhealthy way to deal with the issue.

“Many in my party have treated this as just another partisan fight. It’s toxic and it’s a disservice,” he said.

“I think they will be judged by the country. I mean, because ultimately the truth is going to be known,” Mr Kinzinger told reporters on Wednesday, when they asked him about his colleagues, who have been accused of spreading fake allegations at the behest of Mr Trump and defending his actions until the lead up to the insurrection.

He added: “If somebody really thinks that this narrative of 6 January that some are trying to push is actually going to be the one written in the history books, it’s not.”

Meanwhile, several Republican leaders have called for Mr Kinzinger and Liz Cheney, the two Republicans on the committee, to be removed from other committee slots. The two, however, have said such criticism will not deter them.

Several party colleagues chipped in and bought Kinzinger a box of Kleenex. If he has any left after the hearings, he can save it for his re-election defeat announcement.

Only problem with that story it wasn't republicans that walked up to him Another lie fake news it was the democrats that walked up to him and thanked him For crying what an act never seen that happen ever before were a politician especially a male is gonna cry in a senate hearing Because the capital got over ran.He doesn't cut cry when cops get assassinated or that 1 lady climbed through the window got shot and killed.He doesn't cry when someone gets killed he cries because capital got overran. Another funny act Adam shiff was sniffling too almost crying, of all people what a joke they got the Emmy award best actors

One of the seven Republican senators who voted to convict Donald Trump at his second impeachment trial warned on Sunday that the former president’s “bullying” of the party would lead to electoral defeat in next year’s midterms and beyond. Bill Cassidy of Louisiana was speaking days after the Ohio Republican...
NFL・16 HOURS AGO
Newsweek

Last month Trump called McConnell the "most overrated man in politics," and in July he called him a "stupid person."
POTUS・14 HOURS AGO
Fox News

Analysts tore into the mass media who hyped the potential danger of Saturday's rally in Washington, D.C., only to find that the actual attendees were outnumbered by the police and the press. The media frequently reported on the danger of the "Justice for J6" rally, suggesting it would be the...
PROTESTS・20 HOURS AGO
Newsweek

Inside Thompson and Cheney's Jan. 6 probe alliance — both genuine and strategic

In interviews with POLITICO, the Democrat and Republican leading the insurrection select committee revealed a surprisingly thriving partnership.
CONGRESS & COURTS・2 HOURS AGO
Newsweek

"The Republican Party will not get better unless you stand up," the congressman said in a message to fellow GOP lawmakers on Saturday.
PRESIDENTIAL ELECTION・1 DAY AGO
Newsweek

"The time is now to speak up," Rep. Adam Kinzinger (R-Ill.) implored his Republican colleagues in a video message posted Saturday, a day after fellow GOP Rep. Anthony Gonzalez announced his retirement. Why it matters: Gonzalez was one of 10 House Republicans, including Kinzinger, who voted for impeachment. He said...
CONGRESS & COURTS・1 DAY AGO

The House committee is playing for keeps against the GOP's falsehoods — that there was no insurrection, that the mob was peaceful and that the 2020 election was stolen.
LOS ANGELES, CA・57 MINUTES AGO
Newsweek

Landon Copeland, who was charged in connection with the Capitol riot, doesn't expect a big turnout on Saturday unless Trump says to "go to the Capitol again."
PROTESTS・2 DAYS AGO
WashingtonExaminer

Former President Donald Trump attacked a retiring House Republican on Friday and touted his endorsement of a primary rival in the district as the cause.
POTUS・2 DAYS AGO
Washington Post

The announcement came exactly as you might expect of a former star for the Ohio State Buckeyes: white text on a scarlet background, Rep. Anthony Gonzalez’s name on a gray background at the top. Its message was also one that would be familiar to Buckeye fans, given that it amounted to an unexpected loss.
POTUS・2 DAYS AGO

Ivanka Trump repeatedly implored her father, then-President Donald Trump, to disavow his claims that voter fraud cost him the 2020 election as he watched news coverage of the deadly Jan. 6 riot at the US Capitol, according to a forthcoming book. Washington Post associate editor Bob Woodward and reporter Robert...
PRESIDENTIAL ELECTION・4 DAYS AGO
blogforarizona.net

Philip Bump of the Washington Post reports, The worrisome pro-Capitol-riot activism isn’t a rally. It’s in right-wing media. (excerpt):. The government has spent months trying to track down those involved in the January 6 insurrection, arresting them and — usually — then releasing them until trial. A Guardian analysis in May found that 70 percent of those who’d been arrested at that point were released from detention.
U.S. POLITICS・2 DAYS AGO
Washington Examiner

House Speaker Nancy Pelosi mocked the possibility of former President Donald Trump running again in 2024. The California Democrat made jabs at Trump during an event at Cambridge University on Thursday when talking about the Jan. 6 riot at the Capitol. "I reference him from time to time as 'What's-his-name,'"...
PRESIDENTIAL ELECTION・3 DAYS AGO
Newsweek

Previously, the senator reportedly told Trump he had been "written off as dead" because of the U.S. Capitol riot.
POTUS・3 DAYS AGO
Washington Post

Ever since Mike Pence announced on Jan. 6 that he lacked power to help Donald Trump overturn the 2020 election in Congress, it’s been widely suggested that the vice president was one of the few heroes in this ugly tale. But new revelations in the forthcoming book by Post reporters...
POTUS・5 DAYS AGO
AFP

Washington was on high alert Friday on the eve of a rally in support of the pro-Trump rioters who ransacked the US Capitol on January 6, with security forces better prepared to avoid a repeat of the mayhem.  "We think anybody that committed violence against police officers or destroyed property at the Capitol building on January 6 should be given a speedy trial -- if guilty, convicted and locked up," executive director Matt Braynard told C-SPAN on Friday.
NFL・2 DAYS AGO
Newsweek

"You unelect these bastards, that's what you do. You don't give them another shot, another bite at the apple," Steele said
POTUS・3 DAYS AGO
WashingtonExaminer

Republicans and former President Donald Trump will be nowhere near a rally planned for Saturday at the Capitol building by those who sympathize with the hundreds of Jan. 6 rioters charged and, in some cases, held in extended custody for trespassing and other offenses.
PROTESTS・2 DAYS AGO