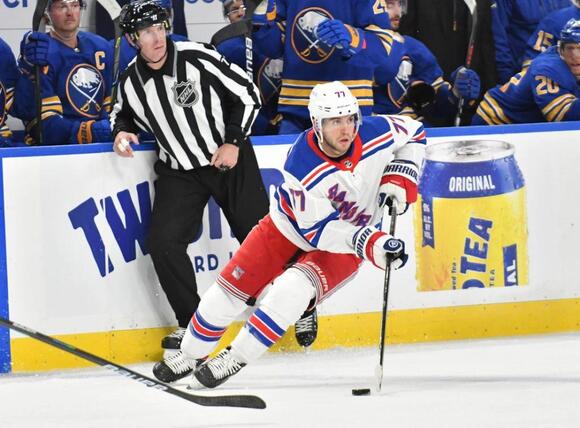 The Carolina Hurricanes made a bold move Wednesday, signing defenseman Tony DeAngelo, who said he realizes he needs to demonstrate that the disruptions that led to numerous past issues won’t resurface.

The New York Rangers disowned him after just six games last season. He was involved in an incident with goalie Alexandar Georgiev after an overtime loss to the Pittsburgh Penguins on Jan. 30.

DeAngelo was waived in the aftermath, and he went unclaimed by the rest of the NHL. The Rangers eventually bought out his contract. Details about the incident were unclear, and DeAngelo did not get into specifics while talking with the media about his signing on Wednesday. 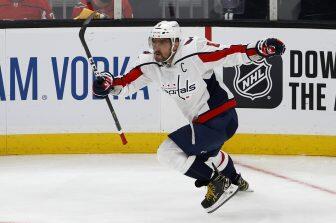 “That’s private stuff,” he said. “They didn’t let it out, I’m not going to be the one to let it out. I will say that I think there’s been some misunderstanding of maybe exactly what happened. …

“There’s mistakes made for myself that I take responsibility for, and on the other side as well. But it is what it is. You’ve got to move on. But I’m excited to be in Carolina and continue my career.”

The NHL suspended him for three games in 2016 during his rookie season with the Arizona Coyotes for abuse of officials. That came two years after the Ontario Hockey League suspended him for eight games for making a racist slur at a teammate. 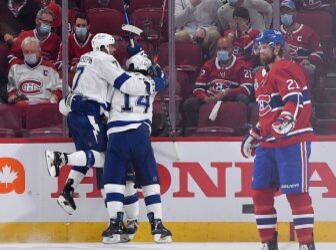 While some fans of the Hurricanes expressed displeasure with the signing, threatening to no longer attend games, DeAngelo asked for a chance to prove himself.

“Stick with us. Give me a shot, and I’m going to make the best for you guys,” DeAngelo said.

Hurricanes general manager Don Waddell said of signing DeAngelo, “We did our research on who this person is, beyond what the perception of him (is). There’s no doubt that he has made mistakes. We acknowledged that, and more importantly, he recognizes that he’s made mistakes and he knows he’s got to continue to work and grow as a person.”

The Carolina Hurricanes surprised many this offseason when they signed controversial defenseman Tony DeAngelo. Many believed he would be blackballed from the NHL and it certainly seemed that way after being bought out by the New York Rangers. However the Hurricanes decided to bring him in anyways. DeAngelo has been...
NHL・10 DAYS AGO
CharlotteObserver.com

The Carolina Hurricanes take the ice Thursday at PNC Arena for preseason training camp, with several questions to be answered by coach Rod Brind’Amour and his staff. The biggest question for camp? Canes captain Jordan Staal has his opinion. “I would say with all the new faces, it’s making sure...
NHL・3 DAYS AGO
Yardbarker

Detroit Red Wings Have Options to Upgrade Their Wingers

The Detroit Red Wings did exactly what they needed to do. They addressed their winger situation by letting Anthony Mantha go and getting a haul in return. Jakub Vrana could easily be better than Mantha, and some would argue that he already is. They also got Richard Panik, a rental depth forward on a relatively cheap contract, that left after the season. They also got two draft picks; one turned into Wyatt Johnston, and the other is in the upcoming 2022 draft.
NHL・14 DAYS AGO
Sportsnaut

Defenseman Zdeno Chara returns for a 24th NHL season in 2021-22, agreeing to terms Saturday on a one-year deal with
NHL・7 DAYS AGO

Carolina Hurricanes: When could we see Martin Necas move to center?

RALEIGH, NORTH CAROLINA - JANUARY 28: Martin Necas #88 of the Carolina Hurricanes looks on during the first period of their game against the Tampa Bay Lightning at PNC Arena on January 28, 2021 in Raleigh, North Carolina. (Photo by Jared C. Tilton/Getty Images) In 2017, the Carolina Hurricanes used...
NHL・12 DAYS AGO
wingingitinmotown.com

Five Red Wings who could make an impact in 2021-2022 NHL season - Detroit News. There will be a stiff fight for playing time on defense, and DeKeyser isn’t assured of a big minutes or even a spot in the regular lineup. But given more time this offseason to get...
NHL・12 DAYS AGO
FanSided

Where will Kotkaniemi play for the Carolina Hurricanes?

Jesperi Kotkaniemi is the talk of the hockey world right now. His offer sheet took him out of Montreal and brought him down to Raleigh. In the first successful offer sheet since Dustin Penner, Jesperi has moved down to Raleigh. Now, we all know that Kotkaniemi is now a member of the Carolina Hurricanes, so where will he slide into the lineup?
NHL・10 DAYS AGO
Sports Illustrated

Are you ready? We’re back to the 82-game regular season format, which means more joy and also more pain. It’s a roller coaster of emotions every season because there are always surprises, and the good ones can make us feel like geniuses while the bad ones feel like belly flopping into an empty pool.
NHL・13 DAYS AGO

Mikey Anderson is one of the most undervalued defenseman

Heading into his sophomore season with the LA Kings, Mikey Anderson’s defensive positioning is already one of his more polished skills. Mikey Anderson joined the LA Kings organization in June of 2017 after getting drafted in the fourth round by the club in the NHL Entry Draft. Anderson was recently coming off of a 32-point season in the USHL as a defenceman and was committed to the University of Minnesota-Duluth in the NCAA.
NHL・10 DAYS AGO
NHL

VEGAS (September 15, 2021) - Vegas Golden Knights General Manager Kelly McCrimmon announced today, September 15, that the team has signed defenseman Dylan Coghlan to a two-year contract worth an average annual value of $762,500. Coghlan appeared in a career-high 29 games last season for the Golden Knights and registered...
NHL・10 DAYS AGO
The Blade

Defenseman Blake Hillman, who played in 35 games for the Toledo Walleye in 2019-20, is returning to the organization. Hillman, re-signed with the Walleye on Tuesday. The 25-year-old played in 43 games last season for South Carolina, posting three goals, eight assists, and 12 penalty minutes. In 2019-20, he split...
NHL・11 DAYS AGO
cardiaccane.com

The Carolina Hurricanes announced the appointment of former defenseman Tim Gleason as a new assistant head coach. Gleason had been in the organization aiding player development prior to his new job on the bench next to his former captain Rod Brind’Amour. Gleason spent a long time as a player for the Carolina Hurricanes too, becoming an alternate captain.
NHL・10 DAYS AGO

Yesterday we broke down the wingers for the Carolina Hurricanes and today we will look at the center position. In an offseason of turnover, the Carolina Hurricanes held on to their top three centers and lost fourth-line center Morgan Geekie to the expansion draft. The Canes added center depth in a combined effort of veterans and prospects who can contribute in future seasons.
NHL・11 DAYS AGO
CharlotteObserver.com

How many national TV games will the Carolina Hurricanes have? Here’s the list

The NHL has a new TV package — ESPN is back in the game — and that will mean additional national exposure for the Carolina Hurricanes in the 2021-22 regular season. With the NHL having games televised and streamed by ESPN, Hulu, ABC, ESPN+ and TNT, the Canes are scheduled for one exclusive ESPN telecast and one exclusive ABC game. There are no scheduled TNT telecasts of Canes games this season.
NHL・9 DAYS AGO
FanSided

A lot of the Carolina Hurricanes roster had great success last season in the Central division. There were major step ups from young players, big seasons from elder players, and the coaching system became a little tighter. But one player who did not enjoy his time in the NHL’s traditional western conference division was Teuvo Teravainen.
NHL・9 DAYS AGO
ESPN

CHICAGO -- Carolina center Sebastian Aho was amused by the Hurricanes' offer-sheet trolling of the Montreal Canadiens. In 2019, Aho signed a restricted-free-agent offer sheet with the Canadiens for five years and $42 million, which the Hurricanes quickly matched. Last month, Carolina turned the tables and signed Montreal restricted free agent Jesperi Kotkaniemi to a one-year, $6.1 million offer sheet, which the Canadiens opted not to match.
NHL・8 DAYS AGO
chatsports.com

May 12, 2021; Montreal, Quebec, CAN; Montreal Canadiens defenseman Erik Gustafsson (32) during the warm-up session before the game against Edmonton Oilers at Bell Centre. Mandatory Credit: Jean-Yves Ahern-USA TODAY Sports. The New York Islanders very clearly have a weak spot on the left-hand side of their defense. After Nick...
NHL・9 DAYS AGO
chatsports.com

The Florida Panthers and Carolina Hurricanes will play the first game of the Prospect Showcase Tournament at Advent Health Center Ice complex in Wesley Chapel, Florida at 10 a.m. this morning. At 1 p.m., the host Tampa Bay Lightning will take on the Nashville Predators. In a bit of god...
NHL・7 DAYS AGO
FOX 21 Online

ST. LOUIS, Missouri – Former UMD men’s hockey star Scott Perunovich will serve as team captain for the St. Louis Blues at a prospects tournament this weekend. The tournament will take place in Traverse City, Michigan beginning Friday. Perunovich missed the entire 2021 season due to shoulder surgery. The Hibbing native signed with the Blues after his junior campaign with the Bulldogs, which saw him win the 2020 Hobey Baker Award. Perunovich was drafted by St. Louis back in 2018.
NHL・9 DAYS AGO
chatsports.com

Zdeno Chara is coming full circle. The Islanders announced on Saturday they have agreed to a one-year deal with the 6-9, 44-year-old defenseman, returning Chara to the organization that drafted him in the third round in 1996. President and general manager Lou Lamoriello has been looking to bolster his depth...
NHL・7 DAYS AGO